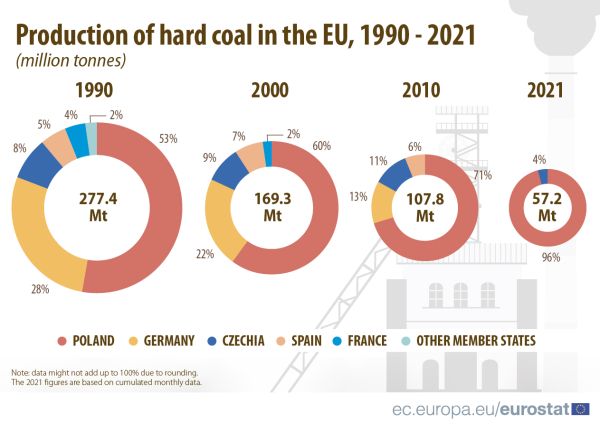 This article explains how consumption and supply of coal in the European Union (EU) and the European Free Trade Association (EFTA)[1] have evolved, highlighting the trends in production and consumption of the main types of solid fossil fuels: hard coal and brown coal. In addition the article gives some figures on the supply of coke oven coke.

Consumption and production of hard coal

Production of hard coal in the EU has decreased almost continuously from 1990, more consistently than consumption. In 2021, the EU production was 57 million tonnes, 79 % less than the 277 million tonnes of 1990. In 2020, 39 % of inland consumption could be covered by production in the EU, compared to 71 % in 1990. The gap between the two was mostly covered by imports (see Import dependency of hard coal). The 2021 figures are based on cumulated monthly data. 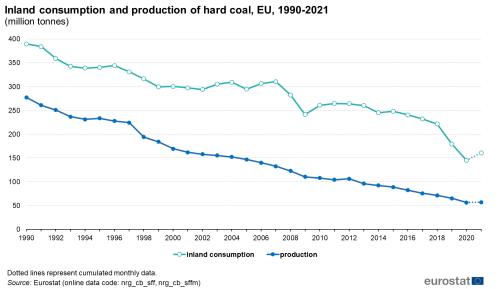 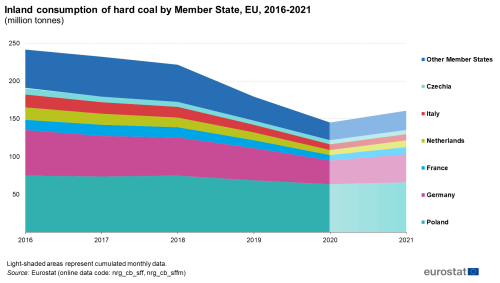 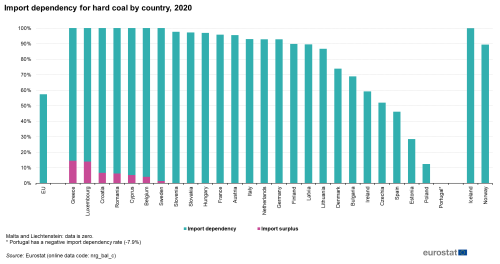 In 2020, Russia supplied more than half (55.6 %) of the EU’s hard coal imports, followed by the United States (17.2 %) and Australia (15.3 %). Other important suppliers included Colombia, South Africa, Indonesia and Canada. In the 2010s, imports from most of these suppliers decreased or remained stable as consumption of hard coal in the EU decreased. The exception was Russia, for which EU countries reported an increase in imports reaching a high of 61 million tonnes in 2018, before decreasing afterwards (see Figure 5).

Coal imports also depend on market prices and other factors, which can lead to changes in suppliers. Traditional hard coal suppliers to the EU such as Ukraine, Venezuela or Norway have seen their imports decrease in recent years; at the same time, new suppliers such as Kazakhstan, Mozambique or the United Kingdom have emerged. 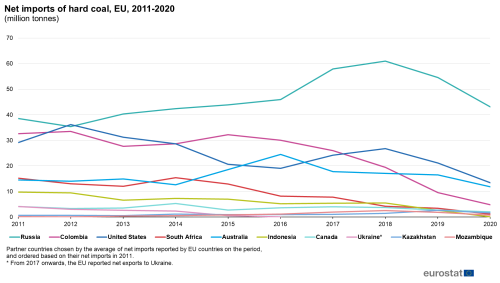 Consumption and production of brown coal

The brown coal production trend is very similar to its consumption trend; brown coal is mostly produced in the countries of the consumption, while imports and exports are negligible. The 2021 figures are based on cumulated monthly data. 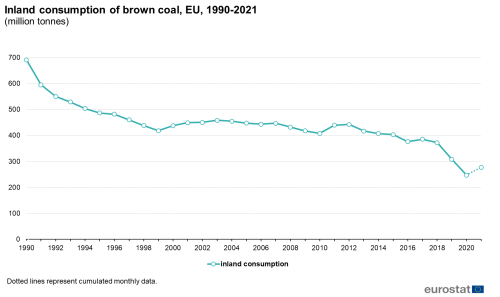 Brown coal is absent from the EFTA countries’ energy mix (production and consumption). 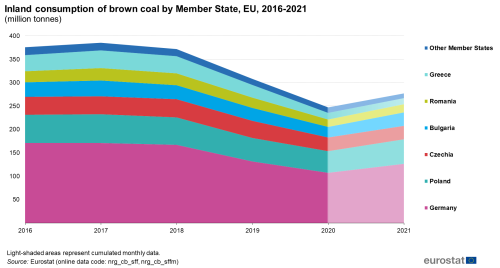 Deliveries of coal to power plants

Figure 8 shows that since 2013, hard coal deliveries for power production show a declining trend; in electricity and heat production, hard coal is replaced more and more by natural gas and renewable energy sources. Furthermore, a large part of hard coal is used in the industry sector, particularly in coke ovens (see Figure 9). Brown coal deliveries to power plants also show a declining trend since 2013. From 2019 onwards, deliveries of both hard coal and brown coal to power plants have decreased significantly. 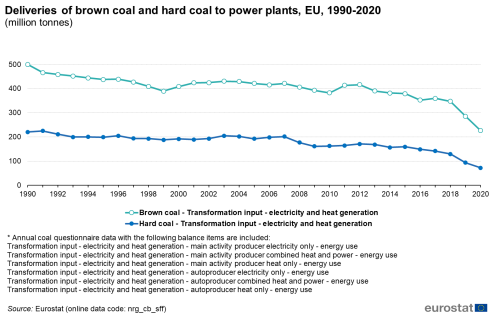 No activity for coke ovens was recorded in EFTA countries. 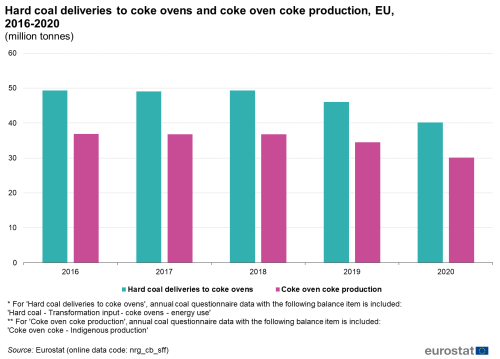 The methodologies and data used for the calculations presented in this article do not make it possible to identify the specific contribution of the 2020 COVID-19 pandemic compared to the existing trends from the data. Future data will allow Eurostat to ascertain whether the observed trends are maintained during and after the pandemic.