In 2019, one in twelve people in the EU consumed alcohol on a daily basis.

In 2019, among the EU population, almost one in five of those who drink alcohol had an episode of heavy drinking at least once a month.

In 2019, slightly more than one quarter of the EU population did not drink any alcohol. 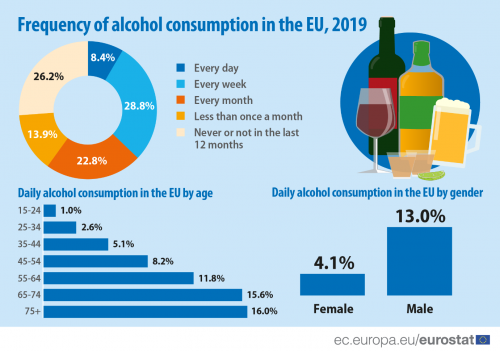 This article presents an overview of alcohol consumption among the population of the European Union (EU). The harmful use of alcohol is determined not only by the volume but also the frequency of drinking. The volume of alcohol consumption and the pattern of drinking affect both health and social outcomes. In particular, binge drinking on a single occasion is a major public health concern, since it has adverse consequences on an individual's well-being, as well as social and mental behaviour.

The statistics reported in this article come from the third wave of the European health interview survey (EHIS), conducted between 2018 and 2020 and covering persons aged 15 and over. The data show that patterns of drinking vary across EU countries; for example, in two countries (Luxembourg and Denmark) the pattern of alcohol consumption is characterised by high proportions of the population drinking at least every month but also high proportions of heavy drinking episodes at the same frequency, while in Romania risky single-occasion drinking proportions are high despite the relatively low proportion of alcohol consumption at least every month. Also, there are countries that are characterised by daily drinking of alcohol (for example Spain, Italy, Portugal), but the levels of regular heavy episodic drinking are relatively low. It is also of interest that regular risky single-occasion alcohol consumption is disproportionately more prevalent among men, persons with medium and high educational attainment and people with the highest incomes.

In 2019, 8.4 % of the EU population aged 15 and over reported having an alcoholic drink every day, compared to 28.8 % of weekly alcohol consumers and 22.8 % of monthly alcohol consumers (see Table 1). In contrast, slightly more than one quarter of Europeans (26.2 %) have not consumed alcohol at all during the twelve months prior to the survey or have never had an alcoholic drink of any kind. 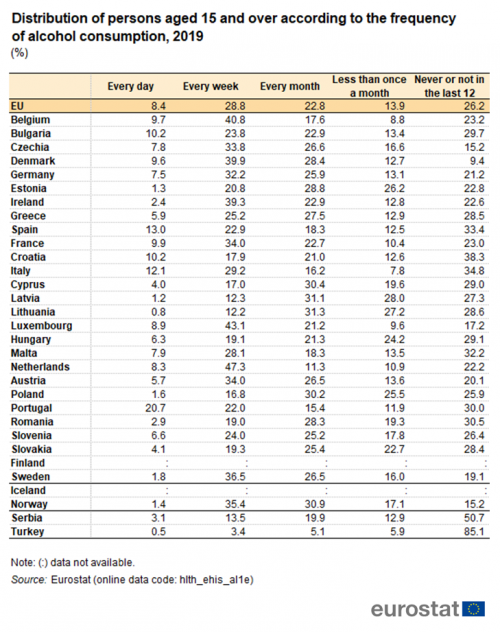 Table 1: Distribution of persons aged 15 and over according to the frequency of alcohol consumption, 2019
(%)
Source: Eurostat (hlth_ehis_al1e)

Italy and Spain recorded a share of people who drink alcohol daily that exceeded 12 % of the reference population, while in Portugal this share reached 20.7 %. At the other end of the scale, in Lithuania, Latvia, Estonia, Poland, Sweden, Ireland and Romania as well as Norway and Turkey, the percentage of the population drinking alcohol on a daily basis accounted for less than 3 %. Over 40 % of the population in Belgium (40.8 %), Luxembourg (43.1 %) and the Netherlands (47.3 %) reported drinking alcohol every week. Furthermore, Lithuania, Latvia, Cyprus and Poland, as well as Norway, recorded a share of persons consuming alcohol every month that exceeded 30 % of the population, as opposed to the Netherlands, Portugal, Italy, Belgium, Spain and Malta, where this share accounted for less than one fifth of the population. The highest shares of persons consuming no alcoholic beverages (either in the 12 months prior to the survey or never) were mainly found in Croatia (38.3 %) and Italy (34.8 %) while the lowest shares were found in Denmark (9.4 %), Czechia (15.2 %) and Luxembourg (17.2 %). By far, the highest proportion of persons consuming no alcohol was found in Turkey (85.1 %).

Among the EU population, almost one in five of those who drink alcohol had an episode of heavy drinking at least once a month

Figure 1 presents the percentage of persons aged 15 and over drinking alcohol who reported having an episode of heavy drinking at least once a month during the twelve months prior to the survey. Almost one in five Europeans drinking alcohol ingested more than 60 g of pure ethanol on a single occasion at least once a month in 2019. This proportion varied widely across the EU Member States, from 3.5 % in Cyprus to more than 30 % in Germany (30.4 %), Luxembourg (34.3 %), Romania (35.0 %), and peaking at 37.8 % in Denmark.

Figure 1: Prevalence of heavy episodic drinking at least once a month among alcohol drinkers, by sex, 2019
(%)
Source: Eurostat (hlth_ehis_al3e) 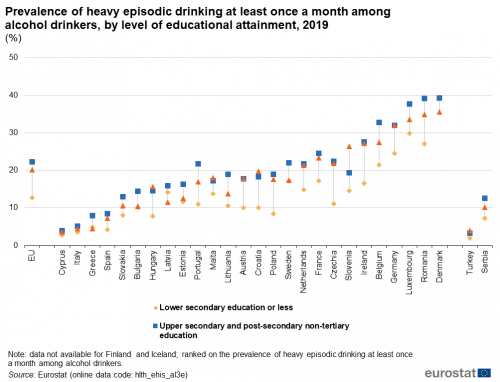 Figure 2: Prevalence of heavy episodic drinking at least once a month among alcohol drinkers, by level of educational attainment, 2019
(%)
Source: Eurostat (hlth_ehis_al3e)

In all EU Member States, with the exception of Hungary, Malta, Austria, Croatia, Slovenia, Denmark as well as Turkey, the percentage of those who drink alcohol having six or more alcoholic drinks on a single occasion at least once every month was higher among those with upper secondary and post-secondary non-tertiary education than those in lower and higher educational levels. In those countries (with the exception of Denmark), the respective share increased with increasing educational attainment.

The widest gaps between those with a high and low educational attainment were recorded in Slovenia, Czechia, Ireland, Croatia and Poland. Also, it should be noted that in Denmark, Latvia and Greece heavy episodic alcoholic drinking rates were higher for those who drink alcohol with at most lower secondary education than for those having completed tertiary education but the differences were relatively small (three percentage points or less).

Table 2: Table 2: Prevalence of heavy episodic drinking at least once a month among alcohol drinkers, by sex and income quintile, 2019
(%)
Source: Eurostat (hlth_ehis_al3i)

When looking at the differences between the two sexes across the three income quintile groups presented in Table 2, it is observed that the distribution of heavy episodic drinking does not follow a systematic pattern across countries. However, the general pattern, where the highest rates of risky alcoholic drinking on a single occasion once per month are recorded for those in the highest income quintile group who drink alcohol, applies also for both women and men in more than half of the EU countries.

The data come from the third wave of the European Health Interview Survey (EHIS) that was conducted in all EU Member States during 2018–2020 according to European Commission Implementing Regulation (EU) No 255/2018.

A derogation was granted to Finland as far as alcohol-related data are concerned.

The general coverage of the EHIS is the population aged 15 or over living in private households residing in the national territory. This source is documented in more detail in this background article which provides information on the scope of the data, its legal basis, the methodology employed, as well as related concepts and definitions.

The indicators presented in the article reflect the frequency of alcohol intake as well as the frequency of risky single-occasion drinking or binge drinking during the twelve months prior to the date of the interview. They aim to capture the Europeans’ drinking status and assess the occurrence of episodes involving heavy drinking behaviours (that is consumption of large amount of alcohol).

The question on the frequency of risky single-occasion binge drinking refers to heavy episodic drinking, which is the equivalent of 60 g or more of pure ethanol consumption on a single occasion.

Limitations of the data

According to specifications described in the European Health Interview Survey (EHIS wave 3) — Methodological manual, one standard drink is presumed to contain 10 g of pure alcohol. However, each country has its own definition for a standard drink which adheres to government issued standards and thus defines on its own how much pure alcohol a drink contains. Those standards vary from one country to another. The data are post-harmonised to achieve cross-country comparability.

Harmful alcohol use and dependence is a risk factor linked to many chronic diseases, such as liver cirrhosis, diseases of the circulatory system, certain cancers and injuries. In recent years, policies and measures adopted at national and international level aim to promote the reduction of the harmful consumption of alcoholic beverages. Despite that, risky alcohol intake remains highly prevalent across Europe. The World Health Organisation (WHO) puts efforts towards the reduction of the health and social burden caused by the harmful use of alcohol.

Since 2008, the World Health Organisation (WHO) has been working on the development of a strategy promoting the reduction of harmful alcohol use. The Global strategy adopted in 2010 set out an action plan of measures and interventions to prevent and reduce alcohol-related harm.

Following the Global strategy, a European action plan to reduce the harmful use of alcohol, 2012–2020 was endorsed in 2012 by the World Health Organisation. It proposes actions for the promotion of health and well-being, the reduction of harm caused by risky alcohol use, and the enhancement of social welfare, through a number of policy options and measures. These policies and measures should be adapted to the specific circumstances in each country, including the religious or cultural environment, the priorities regarding public health, as well as constraints on resources and capacities.

Indicators on hazardous and total (recorded and unrecorded) alcohol consumption are included in the determinants of health chapter of the European core health indicators (ECHI).