Planned update: April 2022 with data from the Agricultural census 2020.

From 2005 to 2016, the share of farms specialised in crop in the EU increased, while the share of mixed farms decreased. 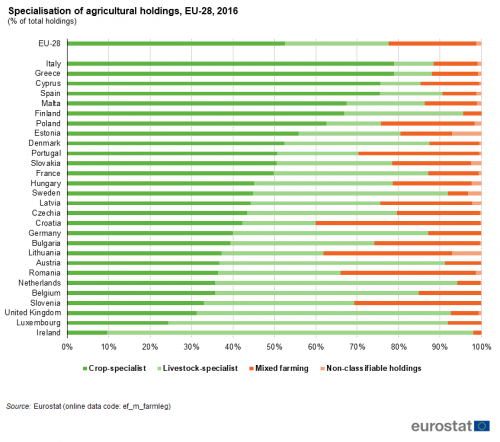 This article provides a fact sheet of the European Union (EU) agri-environmental indicator specialisation. It consists of an overview of data, complemented by all information on definitions, measurement methods and context needed to interpret them correctly. The specialisation article is part of a set of similar fact sheets providing a complete picture of the state of the agri-environmental indicators in the EU.

Number of farms in 2016 and trends for each specialisation

There were approximately 10.5 million agricultural holdings in the EU-28 countries; a decrease by more than 4 million compared with 2005 (Table 1). They can be classified according to their specialisation (see context), and all different types of holdings had a downwards trend. The strongest decrease was for mixed-farming holdings and less for holdings specialised in crops. The development of share of holdings show different trends (Figure 1). The share of mixed farms decreased by 9 percentage points (p.p.), while the share of crop specialists increased by 9 p.p.; the share of holdings specialised in livestock remained stable between 2005 and 2016. Specialisation of farms is increasing as can be seen from the reduction in mixed farms both in total number and also in share of farms. 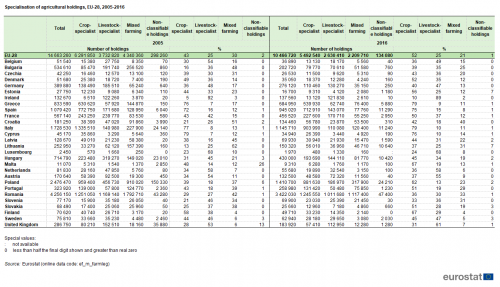 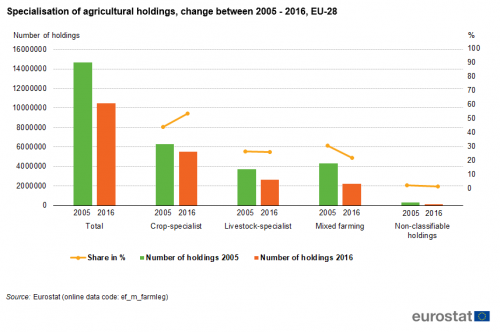 In most EU Member States the same trend is visible. In all countries, except for Ireland, the total number of holdings decreased between 2005 and 2016 with the largest drops of more than 50 % reported in Bulgaria and Slovakia, followed by Latvia, Lithuania and Poland (Table 1). Although the number of field crop farms decreased in most of the countries, the share of these crop-specialists still increased, except for Cyprus. This is mainly caused by a decline in mixed farming holdings. Italy showed by far the most important decrease in crop farms; a reduction of more than 400 000 holdings. Nevertheless, the share of crop farms as share of the total farms in Italy slightly increased. Only Ireland, Croatia, Lithuania, Malta and Slovenia had a positive growth rate for holdings specialised in crops. Regarding the share of mixed farms, the most important decline was reported for Bulgaria, Latvia, Lithuania and Slovakia. However, the largest decreases in the total numbers of mixed farms were seen in Poland and Romania. A positive growth of livestock holdings occurred in Greece, Cyprus, Latvia and Malta. On the contrary, Bulgaria, Hungary, Poland and Romania each had a reduction of more than 100 000 in the total number of livestock holdings.

Figure 2 shows how diverse the distribution of farms' specialisation is on a country level for EU-28. In many Mediterranean countries (Greece, Spain, Italy, Cyprus, Malta) and also in Finland and Poland, crop specialists were the dominant farm type (with a share of more than 60 %), while in parts of North-West Europe (Ireland, Luxembourg, the Netherlands, the United Kingdom) and Austria, livestock farming was the dominant specialisation type (with a share of more than 50 %). More than 30 % of farms were mixed holdings in Croatia, Romania, Lithuania and Slovenia. 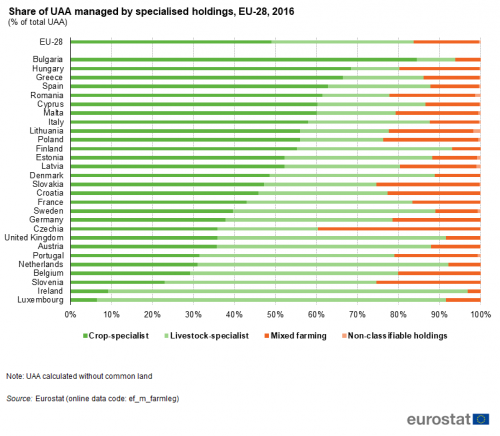 Regional analysis of farms in 2016

Map 1 shows the share of UAA managed by holdings specialised in field crops. Regions where field cropping covered more than 75 % of the UAA were reported in the north and east of Bulgaria, Praha in Czechia, Île de France and Picardie in France, Braunschweig in Germany, Anatoliki Makedonia/Thraki in Greece, Zachodniopomorskie and Dolnośląskie in Poland, Helsinki-Uusimaa in Finland and in the eastern part of the United Kingdom.

On the other hand, regions where the UAA managed by crop farms was very low (less than 5 %) were found in Belgium (Province Luxembourg), Greece (Attiki, Voreio Aigaio, Notio Aigaio, Kriti, Ionia Nisia and Peloponnisos), France (Limousin and Corse), the Netherlands (Utrecht), Portugal (Região Autónoma dos Açores) and in the United Kingdom (Inner London/East and Northern Ireland). 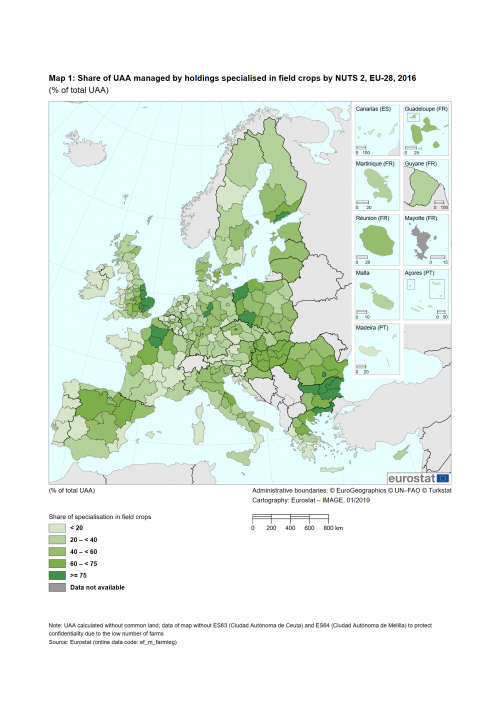 Map 2 shows the share of UAA managed by holdings specialised in grazing livestock (bovines, sheep, goats and horses). Such farms were particularly dominating (managing over 75 % the UAA) in the Province Luxembourg in Belgium, Bremen in Germany, both regions of Ireland, Limousin and Auvergne in France, Vallée d'Aoste in Italy, Luxembourg, the Netherlands (Friesland, Utrecht and Noord-Brabant), Austria (Salzburg, Tirol and Voralberg), Região Autónoma dos Açores of Portugal, Mellersta Norrland in Sweden and in the western part of the United Kingdom. 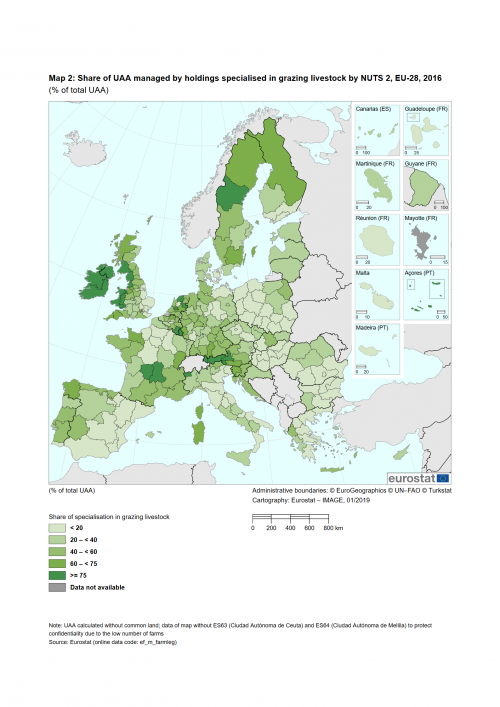 Map 3 shows the share of UAA managed by holdings specialised in permanent crops. In 70 % of the NUTS 2 regions permanent crops play an insignificant role (less than 5 %). Permanent crops are mainly cultivated in the Mediterranean regions and in Portugal. They cover more than 40 % of UAA in Greece (Attiki, Ionia Nisia and Peloponnisos), Spain (Comunidad Valenciana, Andalucía and Región de Murcia), Italy (Puglia and Calabria) and Algarve in Portugal. 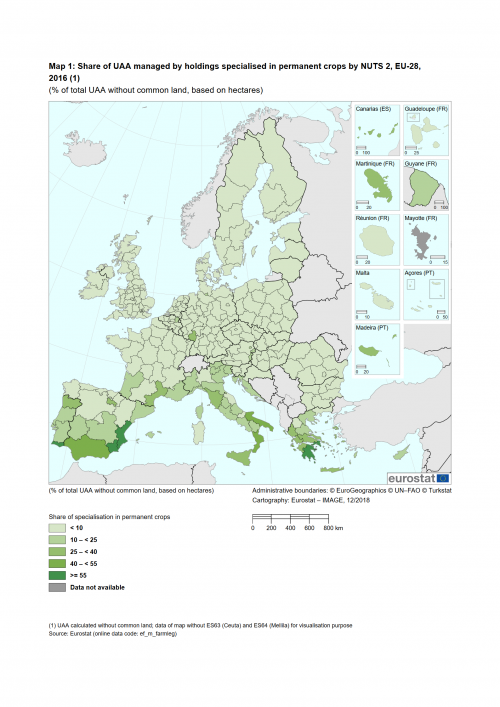 Specialisation is described on the basis of data from the Farm structure survey (FSS). Data are presented at NUTS 0 and NUTS 2 level.

Agricultural holdings are subject to the EU's typology on farming systems. Before 2010 such classification was based on the determination of the standard gross margin (SGM) of each holding (i.e. its economic size). From 2010 onwards the farm typology is based on standard output (SO). The principle of both concepts (SO and SGM) is the same, only the way they are calculated differs. Data calculated with SO are therefore not directly comparable with data calculated with SGM. For survey years 2005 and 2007 results have been recalculated in SO to allow analysis of key characteristics by farm type or by economic size of the holding across time. The classification using SO is described in Commission Regulation 1242/2008. This article presents data with the farm typology based on SO.

Information on specialisation shows the regional diversity of types of agricultural production systems and structures. Farm specialisation occurs when a single type of farming dominates farm income. An agricultural holding is said to be specialised when a particular activity provides at least two thirds of the production or the business size of the farm. This can be described on different levels of details; a "Specialist field crop" farm can be a specialist of "cereals, oilseeds and protein crops" or of "general field cropping" [1]. These two sub-categories can then be broken down further into specialist on e.g. "rice" or "root crops". This fact sheets uses the classification into more general types of farming i.e. farms focusing on arable crops, permanent crops, livestock (incl. grazing livestock) or mixed farms.

During the last 20 years average farm size has grown while the number of farms continue to decrease. This is a structural adjustment which has been driven by the subsidies of Common Agriculture Policy (CAP) (proportional to farmed areas), and economic considerations. Specialisation can lead to a higher efficiency in production, supporting an increase in the level of production per production unit (e.g. unit of land, livestock unit, agricultural work unit or capital unit). An indicator of specialisation is the trend in the share of the agricultural area managed by specialised types of farm. It shows whether farming overall is becoming more specialised and which specialised farm types are becoming more important.

Farm diversification is another relevant concept when considering specialisation: it means turning towards gaining income from diverse activities. Farmers can develop other activities on the farms than agricultural production, such as having farm shops, restaurants or tourism activities. This type of agricultural diversification can be supported under the Rural Development Programmes funded by the Common Agriculture Policy [2].

Farm specialisation towards crops or livestock has an impact on the nutrient balance of a holding. Fertilisers and manure contain large amounts of nutrients which crops use to grow. However, the amount of nutrients a crop can take up is limited, and the excess can leak into water, soil and air, causing a range of environmental problems. The EU has indeed adopted different pieces of legislation which aim at reducing and preventing pollution from, inter alia, nutrients (Water Framework Directive, Nitrates Directive, Air Quality Directive). On the one hand, specialised livestock holdings with little or no crop area or pasture are likely to have a nutrient surplus, as it is not possible to spread all of the manure produced on the farm on crop area or pastures belonging to the agricultural holding without severe risks to the environment. This can be mitigated if the farm is able to extensify its production, to export excess manure to neighbouring farms with large crop areas or to process the manure. However, when a whole region is specialised in livestock breeding, manure disposal can be very problematic, as high transport costs may make the transport of manure to other regions prohibitively expensive. Thus manure processing and mitigation measures which act at the source of the pollution can be effective. Specialist crop holdings, on the other hand, may face a nutrient deficit and have to import nutrients. Due to the low availability of manure, regions specialised in cropping tend to rely on mineral fertilisers which are produced with high amounts of energy and contribute to greenhouse gases. If not applied correctly, this mineral fertilisation can also lead to water pollution.

Specialisation of individual farms is associated with the intensification of the production and the increased use of chemical inputs (per unit area), the mechanisation and the simplification of landscape. As a result, the specialisation of individual farms considerably increases the pressure on biodiversity, soil, water and air quality. Such negative effects on the environment can be mitigated in regions which have a mix of farms. However, when farm specialisation occurs at the regional level, land use is changed towards less diverse cropping and/or livestock patterns due to more concentration on a limited number of products. The introduction of greening requirements under the CAP requires farmers with more than 10 ha of arable land to cultivate different crops:

This greening requirement has however not introduce diversification in some intensive mono-cropping areas in Europe.

In intensive area, a less diverse cropping/livestock pattern already causes a loss of diversity in farmland habitats, as well as in associated flora and fauna, crop varieties and livestock breeds, leading to overall reduction of genetic diversity. However, some specialised systems have positive impacts on the environment if there are able to produce environmental benefits. For instance, extensive cattle and sheep grazing in mountainous regions[3] can be highly specialised, but have a positive impact on the conservation of high-value EU habitats and associated biodiversity.

The environmental effects of mixed farming are less obvious, but as above, they are mitigated if the farming is extensive. Diversification can improve income security and thus the viability of a farm, by spreading risks over several activities. Diversification could potentially prevent land abandonment in such areas. If one activity fails, say, because of animal or crop disease, other activities may still render income. A specialised holding, on the contrary, mainly depends on a single activity. If this fails, the viability of the entire holding may be at stake. When farmers cease activities in marginal areas agricultural habitats are lost and the risk of soil erosion may increase.

Organic farms are more focused on integrated use of livestock and land resources. Through crop rotation, crop diversity and use of livestock manure, natural resources are managed in a more sustainable way than in specialised and intensive farms. The holistic approach of organic farming requires a livestock production related to the land, where the produced manure is used to nourish the crop production.