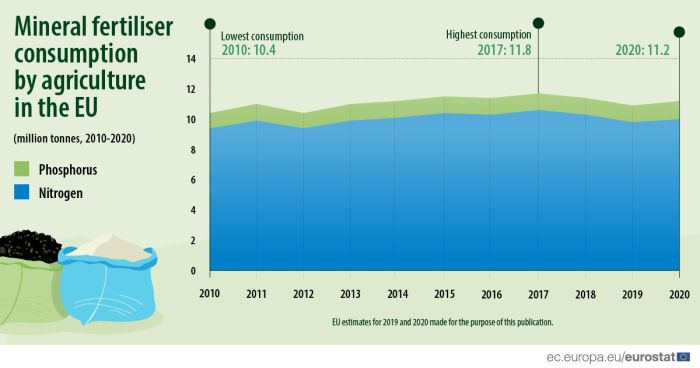 This article provides a fact sheet of the European Union (EU) agri-environmental indicator mineral fertiliser consumption. It consists of an overview of data, complemented by information needed to interpret these data. This article on mineral fertiliser consumption in the EU is part of a set of similar fact sheets, providing a comprehensive picture of the integration of environmental concerns into the Common Agricultural Policy (CAP).

The amount of mineral fertilisers - nitrogen (N) and phosphorus (P) – used in agricultural production in the EU (hereafter termed ‘consumption’) was 11.2 million tonnes in 2020 (see Figure 1). This represented a year-on-year increase of 2.9 % compared with 2019 and an increase of 8.3 % compared with the level in 2010, when use was impacted by relatively high prices (DG AGRI, 2011).

Note: Nitrogenous fertilisers (ammonia, urea, ammonium nitrate) are produced with energy input from natural gas, the price of which is strongly linked to oil prices. Phosphates are mined outside of the EU, which results in high production and transportation costs, also linked to oil prices. The EU’s nitrogen-based fertiliser industry is heavily dependent on gas of Russian origin and Russia and Belarus are key players in the world producton of rock-based fertilisers (phosphates and particularly potassium). The military aggression in Ukraine and application of sanctions on Russia has led to sharply higher fertiliser prices which will likely impact on the use of fertilisers in agriculture in the EU (European Commission, 2022). 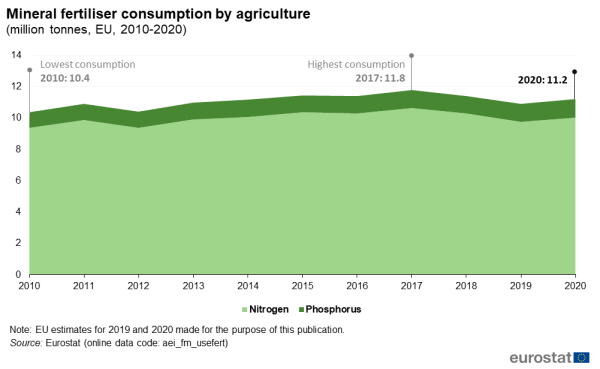 Nitrogen fertiliser consumption by agriculture in 2020 was an estimated 10.0 million tonnes in the EU. This was similar to the average amount consumed by agriculture during the period between 2010 and 2019, albeit 6.9 % above the level consumed in 2010 (see Figure 2).

This fluctuation in nitrogen fertiliser use around the medium-term average consumption level contrasts with the steep declines noted in the 1990s and 2000s, following the introduction of the Nitrates Directive (ND) in 1991 and the introduction of the national action programmes for designated nitrate vulnerable zones (NVZs). The CAP reforms, which moved away from payments coupled to production, also reduced the economic incentive to the use of an excessive amount of fertilisers (DG AGRI, 2019).

In 2020, the consumption of phosphorus fertilisers by agriculture in the EU was 1.2 million tonnes (see Figure 3). This was higher than the medium-term average and about 6 % higher than the level consumed in 2019. 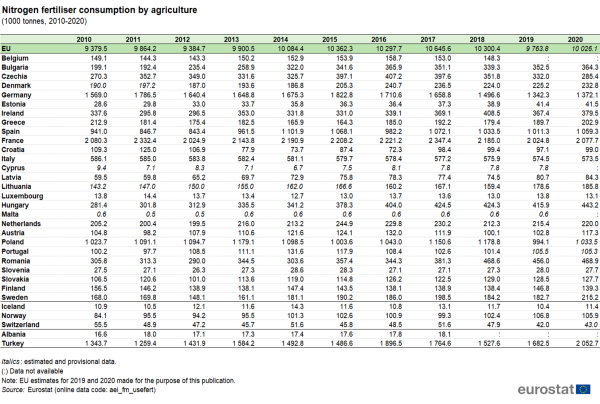 Between 2010 and 2020, there was growth in the use of nitrogen fertilisers in agriculture among a majority of Member States. The sharpest growth in use during this period was in Bulgaria (+83.0 %), Hungary (+57.5 %) and Romania (+53.4 %). This increase may represent the convergence of these countries to the EU average of fertilisers applied per hectare, having started from a relatively low level (DG AGRI, 2019). 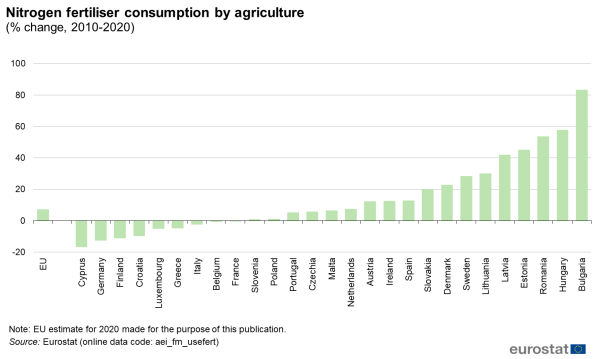 The greater use of nitrogen fertilisers in agriculture in some Member States more than offset reductions in others. Given the size of its agricultural sector, the decline in Germany (-12.6 % between 2010 and 2020) was significant in slowing the growth in use at the level of the EU as a whole. 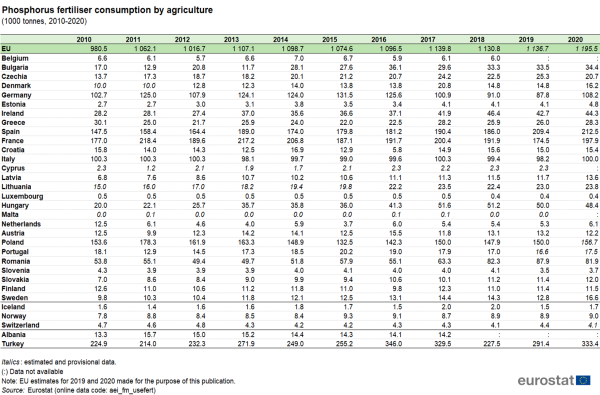 A majority of Member States reported an increase in the use of phosphorus fertilisers in agriculture in 2020 compared with 2010. The growth of use in some Member States was even sharper than that for nitrogen fertilisers over this period: Hungary (+142.2 %), Bulgaria (+102.1 %) and Latvia (+99.4 %). However, there were some Member States for whom the use of phosphorus fertilisers in agriculture decreased over the decade to 2020: among others, it halved in the Netherlands (-50.9 %) and fell by one quarter in Luxembourg (-24.5 %). 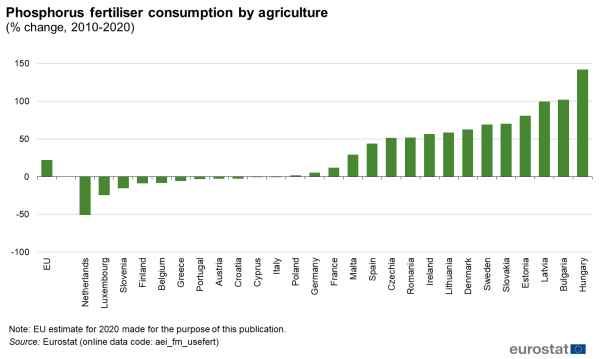 The consumptions of nitrogen and phosphorus fertilisers are linked to the gross nutrient balances, as nutrient inputs to the soil, as well as other agri-environmental indicators.

The data source used in the assessment of this indicator is national data. Tonnes of N and P inorganic fertiliser consumption for year t are transmitted annually each t + 1 at NUTS 0 level and (in some cases) at NUTS 2 level.

These data sources are however not harmonised. Data comes from different types of sources in the Member States, such as farm surveys, production/trade statistics, sales statistics, administrative records etc. Official statistics on mineral fertiliser use are lacking in some countries.

The reference period is the calendar year, however in some cases countries report data based on the crop year. In such cases, no corrections are currently made.

The comparability of the data is weakened by the lack of harmonization of data sources and (in some cases) of the reference year. Data from production/sales statistics may also overestimate the use of mineral fertilisers due to the inclusion of intermediary goods and of non-agricultural use of fertilisers.

Eurostat is working together with Member States to improve the data collection on mineral fertiliser used in agriculture.

Nutrients, such as nitrogen (N) and phosphorus (P), are absorbed from the soil by plants, for their growth. They mainly come in the form of mineral – inorganic – fertilisers, which are widely used in agriculture to optimise production, and organic fertilisers such as manure.

Nitrogen and phosphorus fertilisers greatly enhance crop production, but excessive use may lead to losses of these nutrients to the environment, contributing to environmental pollution. N and P behave differently in terms of their availability for loss from the agricultural system. N is highly soluble with limited build-up in the soils, and research shows a positive relationship between application rate and nitrate loss from the soil root zone. P losses from land occur due to soil erosion and agricultural run-off. Historic over-fertilisation of P can build up soil P saturation, in which case even negligible new fertiliser inputs may increase pollution.

The intensity of fertiliser use has implications for agricultural production and the potential environmental impacts of nutrient run-off from farmland. Agricultural research shows that nutrient requirements (and hence consumption) vary for different crop types and yield expectations and are influenced by previous land management, soil type and climatic factors.

Application of fertilisers is a major factor contributing to losses of nutrients such as nitrate and phosphate from agricultural soils into ground and surface water bodies. This loss can occur via run-off along the soil surface or as sub-surface loss via leaching and drainflow.

Consequently, legislative initiatives through the Nitrates Directive and the Water Framework Directive have sought to limit nutrient losses to water bodies through more careful management of agricultural land.

The Nitrates Directive included the designation of nitrate vulnerable zones (NVZs), establishment of Code(s) of Good Agricultural Practice to be implemented by farmers on a voluntary basis, establishment of Action Programmes to be implemented by farmers within NVZs on a compulsory basis, and national monitoring and reporting. In the Water Framework Directive, an indicative list of pollutants includes organophosphorus compounds and substances that contribute to eutrophication (in particular nitrates and phosphates). Measures suggested in this context aim at reducing the influx of nutrients, such as nitrogen and phosphorus to the groundwater and surface waters and include the reduction of nutrient application, the modification of cultivation techniques, proper handling of fertilisers, and the prevention of soil erosion through erosion minimising soil cultivation.

Other agri-environmental policies and initiatives that affect the consumption of nitrogen and phosphorus fertilisers, directly or indirectly include: