The EU potato sector - statistics on production, prices and trade

Production of potatoes, including seed, 2018 - share of EU-28 harvested production (%)

Potato production in the EU is highly concentrated

Potato production is mainly concentrated in seven Member States; Belgium, Germany, France, the Netherlands, Poland, Romania and the United Kingdom accounted for about three-quarters of the area planted (76.9 % in 2018) and of production (79.5 % in 2018). 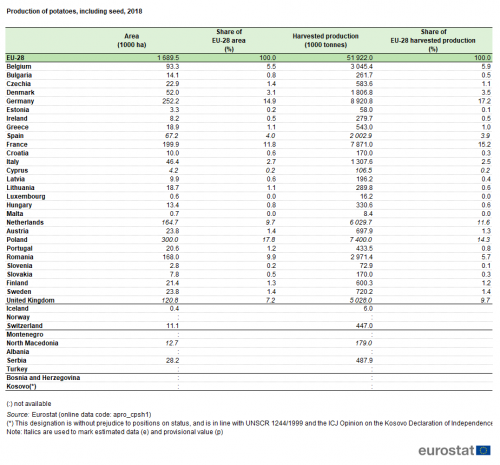 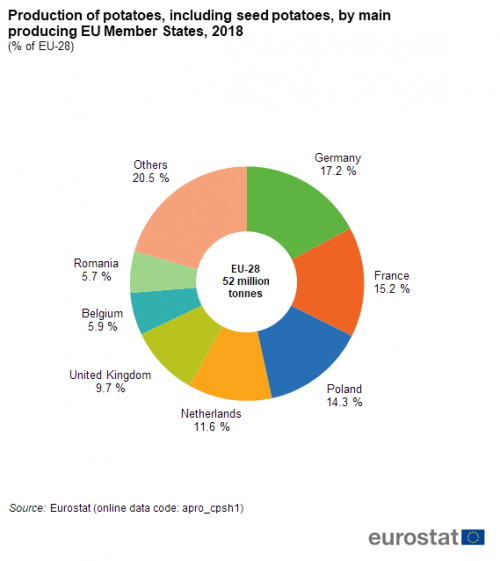 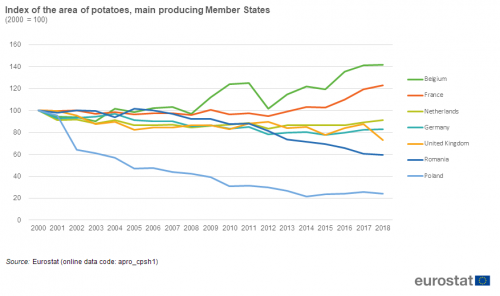 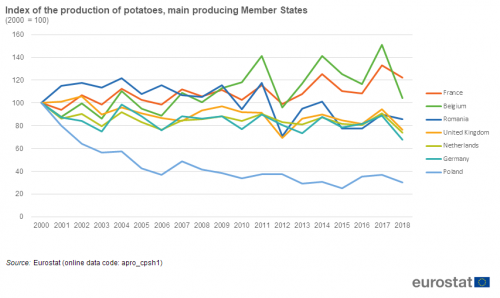 Almost 1.5 million agricultural holdings in the EU grew potatoes in 2016, of which two-thirds were in Romania (40.4 %) and Poland (25.2 %). However, almost 90 % of farms growing potatoes in the EU did so on an area of less than 1 ha. Indeed, the average area of potatoes cultivated on farms in Poland was 0.8  ha and in Romania was 0.2 ha. So whilst numerous, these holdings with very small potato areas of less than 1 ha only accounted for 14.8 % of the overall cultivated area in the EU (see Figure 5). By contrast, there were some Member States where holdings growing potatoes did so on a relatively large scale: in Denmark the average area of potatoes was 26.1 ha in 2016, and in the Netherlands and the United Kingdom it was 16.5 ha. So whilst relatively few in number, these larger-scale potato farms accounted for a relatively high share of the EU’s potato production area. Only 2.2 % of EU farms growing potatoes did so on more than 10 ha in 2016, but these same farms accounted for a clear majority (60.5 %) of the EU’s total cultivated area of potatoes. Organic potato production remains a relatively small segment of the market in most Member States. Only 20 000 holdings produced potatoes under organic farming conditions, with just over one half of these located in either Poland (23.7 %), Austria (14.7 %) or Germany (14.0 %) (see Table 2). In Austria, however, farms producing organic potatoes accounted for one-fifth (20.4 %) of all farms producing potatoes. 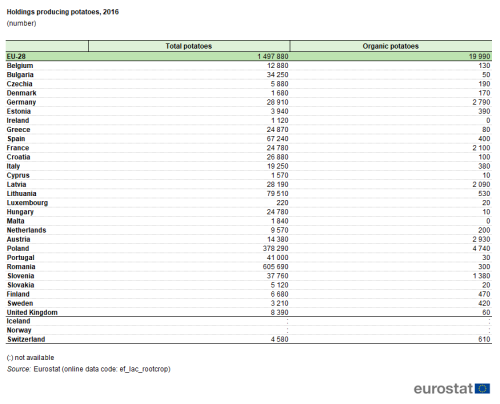 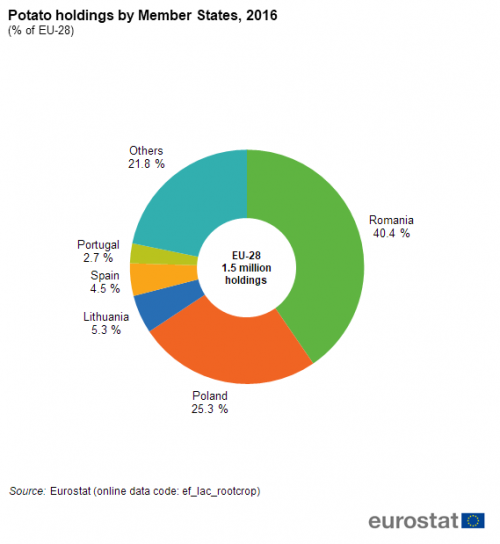 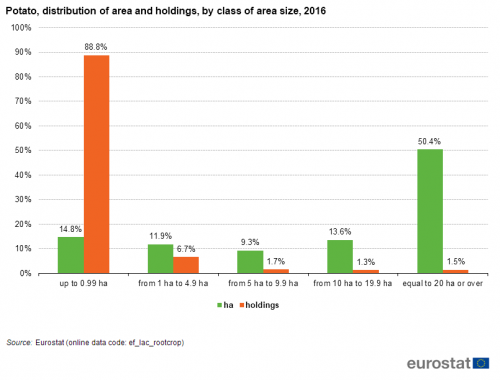 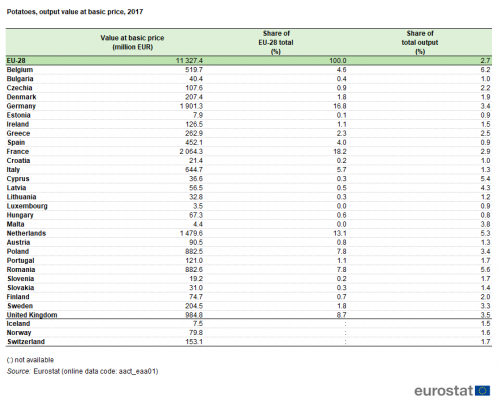 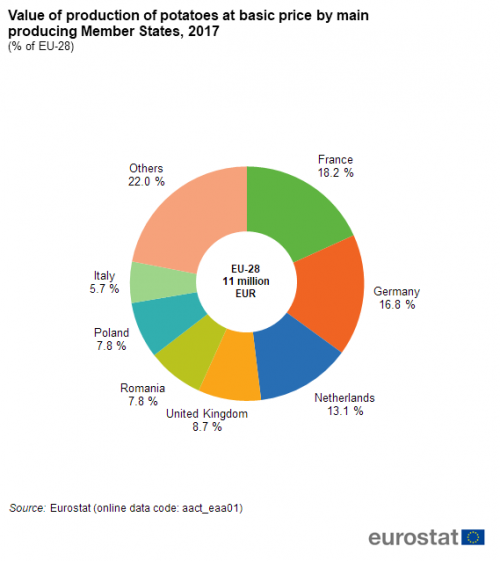 Volatile prices, both on producer and consumer markets

Selling prices for potatoes fluctuated significantly over time and between countries, on both producer and consumer markets (see Table 4), in part reflecting the strong annual fluctuations in production (see Figure 3). There are also often differences in price development between the two markets for the same year and Member State, 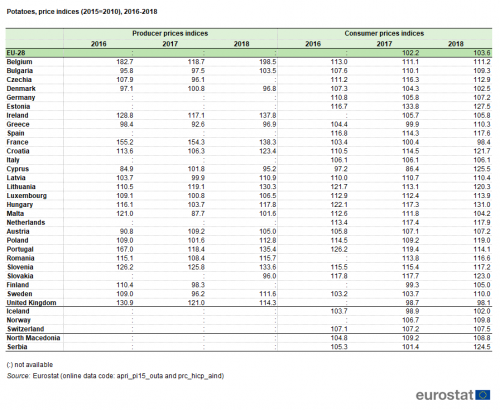 Potatoes were traded mainly on the EU’s internal market: France, the Netherlands and Germany were the leading traders

Member States traded about 7 million tonnes of potatoes between themselves (Intra EU trade) in 2018, the market value of which was EUR 1.7 billion (0.05 % of all intra-EU exports). Standard table (main crop) potatoes accounted for two-thirds (65.5 %) of total intra-EU potato exports in value terms; seed potatoes accounted for one quarter (25.2 %) of the total; early potatoes accounted for 7.6 %, with starch potatoes making up the remaining 1.8 %. Three Member States accounted for two-thirds of intra-EU exports of potatoes in value terms: France (28.0 %), the Netherlands (23.3 %) and Germany (16.8 %). Whereas France and Germany were the main export traders in main crop potatoes (36.8 % and 21.7 % respectively of the intra-EU total in value terms), the Netherlands was alone responsible for more than one half (58.2 %) of the value of all seed potatoes traded within the EU and Cyprus (24.9 %) was the principal intra-EU trader of early potatoes. 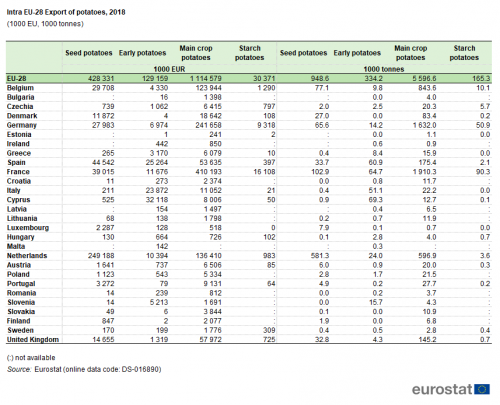 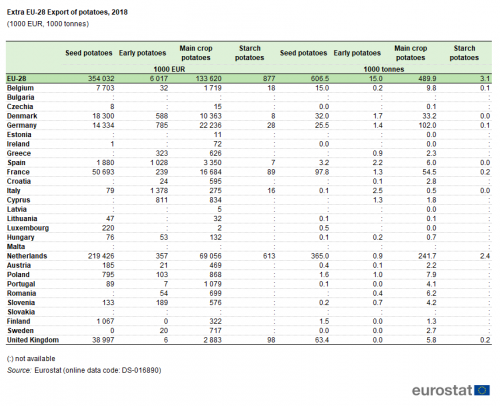 EU imports of potatoes tended to be "early potatoes"

The EU is a net exporter of potatoes. In 2018, it exported 1.1 million tonnes of potatoes with a value of EUR 495 million (0.03 % of the total value of extra-EU exports). These exports were mainly seed potatoes (71.6 % in terms of the total value of potato exports and 54.4  % in terms of volume) and crop potatoes (27.0 % in value and 44.0 % in volume). Exports of early and starch potatoes were almost negligible. Egypt and Algeria were the EU’s largest export markets for potatoes outside the EU (10.2 % and 10.0 % respectively of the volume and 13.9 % and 13.8 % respectively of the value), both exclusively for seed potatoes. Norway was the largest importer of main crop potatoes (10.1 % of the volume and 14.7 % of the value). Given the principal export markets, the vast majority of potato exports were transported by sea (78.7 % in quantity) rather than road (21.1 %). Among the Member States, the Netherlands was the leading exporter[1] to countries outside the EU, accounting for more than half of all extra-EU exports of potatoes, both in terms of value (58.5 %) and volume (54.7 %). To put this in some context, the next largest exporter was France, accounting for a little more than one-seventh of extra-EU potato exports (13.7 % in value terms and 13.8 % in volume terms).

Processed potatoes (mainly as frozen chips and crisps) were worth EUR 10 billion in 2017, or 1.5 % of the overall value of EU food industry output

Besides being consumed directly and traded as a raw commodity, potatoes are processed into four main types of product: frozen potatoes, dried potatoes, prepared or preserved potatoes, and potato starch (see Table 7). The overall value of EU processed potato production reached EUR 10.0 billion in 2017, or 1.5 % of the value of production of the whole European food industry. Frozen chips and crisps were the most significant products in terms of production value 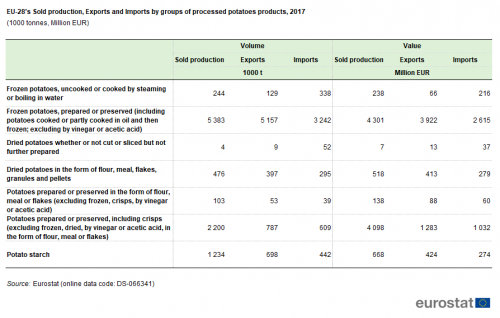 The statistical information presented in this publication is drawn from the Eurostat database, available at the Eurostat website.

COMEXT is the Eurostat reference database for international trade. It provides access not only to both recent and historical data from the EU Member States but also to statistics of a significant number of third countries. International trade aggregated and detailed statistics disseminated from Eurostat website are compiled from COMEXT data according to a monthly process. Because COMEXT is updated on a daily basis, data published on the website may differ from data stored in COMEXT in case of recent revisions. EU data are compiled according to community guidelines and may, therefore, differ from national data published by Member States. Statistics on extra-EU trade are calculated as the sum of trade of each of the 28 Member States with countries outside the EU. In other words, the EU is considered as a single trading entity and trade flows are measured into and out of the area, but not within it. The importance of the EU’s internal market is underlined by the fact that the proportion of intra-EU trade in goods is higher than extra-EU trade in goods in most EU Member States with few exceptions. The variation in the proportion of total trade in goods accounted for by intra-EU trade reflects to some degree historical ties and geographical location.

This article describes the potato sector in the European Union. The overall aim is to offer readers a statistical overview on a single commodity, vertically linking all the steps from the field to the market. The food chain approach is indeed one of the key issues within the EU Commission both for its socio-economic importance and for the extensive legislative EU framework, which is one of the most EU-level harmonised (e.g. General Food law Regulation (EC) No 178/2002). In addition, it is of great relevance also within international organisations, such as, among others, OECD - see the OECD Meeting of Agricultural Ministers held in Paris on 7-8 April 2016 and FAO.