This article provides background information on issues relating to international trade, such as intra and extra EU-trade, comparisons with other sources, asymmetries in the data, quality issues and revisions policies.

Intra-EU trade statistics record the movement of goods between Member States. By convention, goods entering the Member State are called arrivals (intra-EU imports) and those leaving the territory are dispatches (intra-EU exports).

Arrivals in a given Member State include goods entering which:

Intra-EU trade statistics do not cover transactions between private individuals or very small businesses which are not subject to VAT obligations.

The advent of the Single market on 1 January 1993, with its removal of customs formalities between Member States and subsequent loss of trade statistics data sources, required the establishment of a new data collection system: Intrastat. The Intrastat system can be characterised as follows:

For intra-EU trade, the providers of statistical information are all taxable persons reporting an intra-EU transaction whose annual trade value exceeds a certain threshold. This threshold is known as the ‘exemption threshold’ in the Intrastat system. Each Member State fixes its national thresholds, applicable separately to arrivals and dispatches.

Extra EU trade statistics record goods imported and exported by the EU from and to non-EU countries (note that movements of goods ‘in transit’ through a Member State are not recorded).

Imports into a given Member State include goods entering which are placed:

Exports from a given Member State include goods which have been placed:

Therefore, goods from a non-EU country imported into customs warehouses are not recorded unless they subsequently go into free circulation in the country of receipt (or are placed under the customs procedures for inward processing or processing under customs control). Conversely, outgoing goods from customs warehouses are not recorded as exports. This method of measuring international trade in goods is referred to as the special trade system.

Extrastat data on trade in goods with non-EU countries are collected by customs authorities and are based on the records of trade transactions in customs declarations. Extra-EU trade statistics do not cover goods declared orally to customs authorities which are non-commercial, or which are of a commercial nature but have a value not exceeding the statistical threshold of EUR 1 000 and 1 000 kg. The providers of statistical information are all natural or legal persons lodging a customs declaration in a Member State on condition that the customs procedure is of statistical relevance.

Statistical procedure and preferential treatment (for imports only) are additional data collected for extra EU trade. The first relates to customs procedures and distinguishes between different types of imports and exports, while the preferential treatment (according to the EU Generalised Scheme of Preferences - GSP) indicates whether reduced or zero rates of customs duty apply to a transaction.

Comparison with other sources

Discrepancies between Eurostat data and national data may exist due to the application of different concepts and definitions. The table shows the methodological discrepancies by Member State. The conceptual differences in the column "other" are the following:

When there is no methodological reason for discrepancies, it should nevertheless be kept in mind that data revisions may also alter the comparability of European and national data, at least for a transitional period. According to the EU legislation, revised data should be communicated to Eurostat within one month each time a revision occurs at national level. 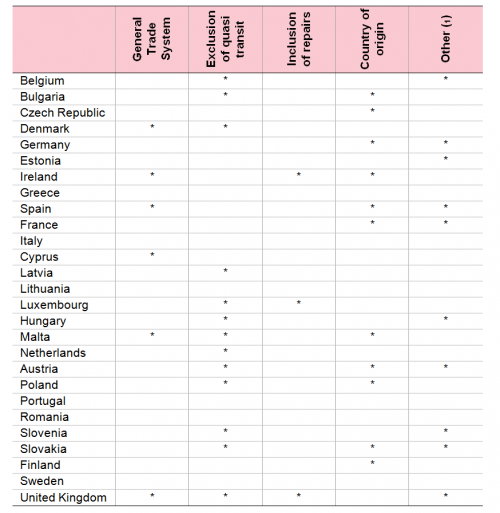 Although most Member States compile the goods account of their balance of payments from their international trade in goods statistics (ITGS), adjustments need to be made to meet the different definitions. In practice, these adjustments aim to convert trade in goods statistics to the basis required for the national accounts. This is because flows of goods and services are defined, in terms of coverage, in virtually identical fashion in the manuals relating to national accounts and balance of payments. The adjustments needed address differences in coverage, the treatment of particular operations, the valuation of transactions (conversion of import value from cost, insurance and freight (CIF) to free-on-board (FOB)) and the time the transactions are recorded. In addition, as already mentioned, some Member States make adjustments to deal with the incomplete coverage of their trade statistics. These adjustments are not discussed further in this guide but are set out in the publication Differences between Balance of Payments and Foreign Trade Statistics. It should, however, be stressed that it is necessary to distinguish carefully between the two methods of calculation to avoid confusion and to note that ITGS provide the most suitable dataset for the measurement of physical flows of goods.

Asymmetries occur when the declaration of the importer in country A is not consistent with the declaration of the exporter in country B. Asymmetries come either from errors in reporting or from differences in the concepts and definitions applied by the partner countries. Some of the asymmetries of a methodological nature could disappear thanks to further harmonisation in national practices; others will continue as they are linked to basic principles for compiling ITGS which are unlikely to change (e.g. CIF/FOB valuation). The most common causes of methodological asymmetries are the following:

Another possible source of asymmetries is the different application of thresholds for Intrastat declaration. The Intrastat legislation completely exempts traders with a low intra-EU trade value from any statistical reporting or allows the collection of simplified information. Member States nevertheless have to achieve the coverage rate required by the legislation: data must be collected directly from traders for 97 % of the dispatches in value and 95 % of the arrivals (93 % from 2014 onwards). The data not collected must be estimated but not at the most detailed level. The EU legislation states that estimates are to be allocated at least by chapter (HS2 codes) and partner Member States. Traders may also be given the possibility to report simplified information for small transactions below EUR 200. All these measures affect the data accuracy at the most detailed level, but full coverage of trade is still ensured. This amounts to a trade-off between data accuracy and the burden on businesses.

Users should be aware of these possible causes of asymmetry. Comparison of the sources selected may also be affected by other factors such as how old, how detailed or how up to date the information available is. It is worth noting that Eurostat’s database is based on a monthly data flow that allows revisions to be included on a regular basis.

Why is the intra-EU trade balance not equal to zero?

Considering that the intra-EU trade data are based on common and largely harmonised rules, one might expect the intra-EU trade balance to be zero or at least close to it. However, it is worth underlining that a perfect match is made impossible first of all by the CIF/FOB approach: the import value should be higher than the mirror export value as it includes extra transport costs.

A close match could nevertheless be legitimately expected given that trading partners within the EU are often neighbouring countries, but deliveries to vessels and aircraft are another methodological reason preventing this: such movements of goods create asymmetries in intra-EU ITGS as specific legal provisions state that only dispatches are to be reported.

At global level, most methodological reasons for asymmetries disappear. The remaining issues are in data reporting (e.g. missing Intrastat declarations, and trade in specific goods like sea-going vessels and aircraft not being properly captured).

What is the 'Rotterdam effect'?

When are data revised and considered as final by the countries?

International trade in goods statistics, like many published statistics, must balance the need for timely information with the need for accuracy. Inevitably, the detailed data sent for a given month are subject to the possibility of later revision as a consequence of errors, omissions or — particularly with the Intrastat system — late declarations by the providers of the statistical information. When monthly results already sent to Eurostat are subject to revision, revised results are to be sent no later than the month after they become available.

Data are revised frequently according to national needs and practices. However, Member States should provide Eurostat with final detailed data at the latest by October following the reference year. At that time data become ‘final’ and should not be revised further except in exceptional and well-justified cases. The importance of a revision will depend very much on the data user and what use they make of the data. To aid both the monitoring of revisions and users’ understanding of their impact, Eurostat and Member States have agreed on thresholds to define different levels of revision at the aggregate level.

Metadata reports are published each month showing the revision to EU and euro area aggregates and to individual Member State data. The reports show how much the data have changed since their previous publication (‘Subsequent data publications’) as well as since they were first published (‘first and last data publications’). The reports contain explanations of the agreed revision levels and indicate for individual Member States which level the revision is classified as.

The effect of revisions on the EU and euro area aggregates is also disseminated in a report updated each month showing all of the vintages, and the percentage change between the different vintages, for the following indicators:

Both the report containing the different vintages for the abovementioned aggregates and the metadata reports (Subsequent revision level and Revision level from first release) are available at this text link.

All the latest revisions sent by the Member States are included in the monthly updates.

When disseminated data are updated?