This article presents recent statistics on the structure of general government debt and its relationship to gross domestic product (GDP) in the European Union (EU). In the context of the Stability and Growth Pact's Excessive deficit procedure notification process, Eurostat publishes government debt data twice a year, in April and October, as well as quarterly government debt data transmitted to it in line with Regulation (EU) No 549/2013 (ESA 2010 transmission programme).

In order to analyse the debt structure in European countries, Eurostat collects additionally data in an annual survey providing information on Member States' government gross debt by sector of debt holder, by instrument, by initial and remaining maturity and by currency of issuance. The survey also collects information on (one-off) guarantees granted by the general government to non-government units as well as the market value of the Maastricht debt instruments and the apparent cost of government debt. One-off guarantees are contingent liabilities which are not included in general government gross debt.

This article examines the main results of the latest questionnaire, fully or partly completed by the EU-27, the United Kingdom and Norway.

Maastricht debt as a percentage of GDP

Breakdown by subsector of general government

According to ESA 2010, the general government sector (S.13) is divided into four subsectors:

Figure 2 gives an overview of the subsector breakdown, as a percentage of total debt for all subsectors, i.e. not consolidated between different levels of government.

In Germany (29.3 %) and Spain (20.1 %), state governments accounted for a significant share in the total gross debt (not consolidated between subsectors). State government as a subsector of general government exists only in four Member States, namely Belgium, Germany, Spain and Austria. The debt share of state government was 13.1 % in Belgium and 7.1 % in Austria. 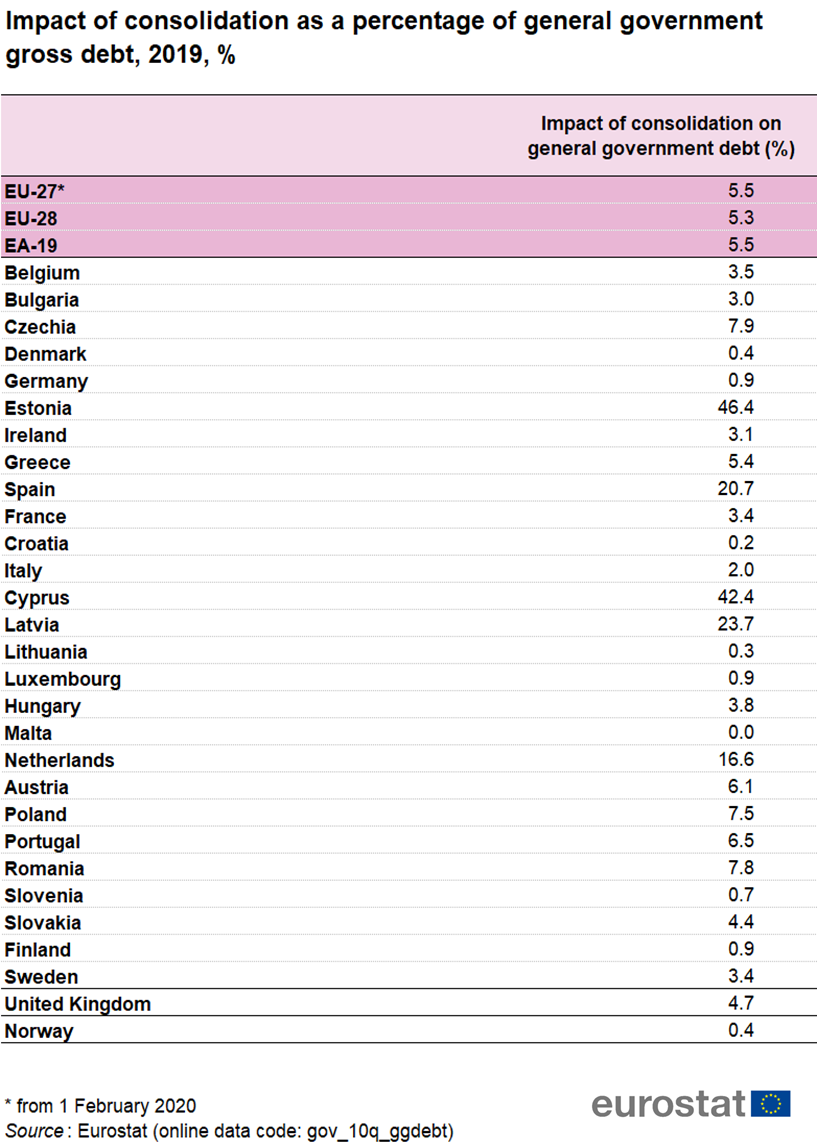 The majority of countries show a limited consolidation impact between the subsectors of general government, where the general government debt was reduced by less than 5 % in 16 of the 27 EU Member States as well as in the United Kingdom and Norway. A significant consolidation effect was observed in Estonia (46.4%), Cyprus (42.4 %), Latvia (23.7 %), Spain (20.7 %) and the Netherlands (16.6 %). Significant consolidation effects are often due to central government liabilities in deposits held by social security funds, for example in Estonia, Latvia and Cyprus. The level of consolidation tends to be influenced by the growing prevalence of cash pooling arrangements.

The Maastricht debt is divided into the following categories according to the ESA 2010 classification:

The breakdown of debt by financial instrument is presented in Figure 3.

For 25 of the 27 EU Member States, the most used debt instrument remained debt securities at the end of 2019; ranging from a share of 10.5 % of Maastricht debt in Estonia to 91.8 % of the general government debt in Czechia.

Estonia, Greece and Norway registered a different breakdown, with loans making up a share of 87.8 %, 80.6 % and 59.1 % respectively. Significant loan to total debt ratios were also recorded for Cyprus (41.4 %), Luxembourg (28.2 %) and Croatia (29.2 %). The countries reporting a higher share of loans tended to be those either having a relatively low level of general government gross debt (e.g. Estonia), a relatively high share of debt of subcentral sectors of government or having benefited in recent years from loans of EFSF, ESM and other international assistance (e.g. Greece and Cyprus).

At the end of 2019, currency and deposits represented less than 5 % of total debt for 24 countries. In contrast, currency and deposits accounted for 12.7 % of total general government gross debt in Portugal (due to saving certificates), 10.9 % in Ireland (due to defeasance structures) and 9.4 % in Italy (due to saving certificates).

Breakdown by sector of debt holder

The debt questionnaire aims to provide detailed information on the time structure of government debt based on its initial maturity. The maturity is subdivided into several maturity brackets: less than one year, one to five years, five to seven years, seven to ten years, ten to fifteen years, fifteen to thirty, and more than thirty years, as well as the summary category of more than one year. For some countries, which did not provide the complete breakdown, only two categories are shown: less than one year (short-term) and more than one year (long-term). For the other sixteen countries, a detailed debt maturity breakdown is available. The ratio of long-term and short-term debt to total debt is illustrated in Figure 5.

General government gross debt classified by maturity reveals a common pattern: between 75.4 % (in Norway) and nearly 100 % of the outstanding debt was issued on a long-term basis. Short-term debt levels of less than or equal to 1 % were recorded in Lithuania (0.0 %) and Bulgaria (0.1 %).

Breakdown by currency of issuance

As shown in Figure 6, of the 27 countries for which 2019 data is available, 16 Member States issued all or almost all (>99 %) of their central government gross debt in national currency. In particular, Belgium, Estonia, Lithuania, Luxembourg, Portugal and Finland issued 100 % of their debt in national currency (all in euro), while this ratio was above 99 % in Denmark, Spain, France, Italy, Latvia, Malta, the Netherlands, Austria, Slovenia and Slovakia. (Please see the notes below.)

Only two countries issued more than 50 % of their debt in foreign currency: Bulgaria (79.9 %, note that Bulgaria has a currency board arrangement vis a vis the euro) and Croatia (72.4 %). Romania (46.8 %) and Poland (28.1 %) also had significant shares of foreign currency debt. All four countries are not part of the euro area and the major share of their foreign currency issuances are denominated in euro.

Government guarantees as a percentage of GDP

Based on 28 replies from EU Member States and UK the ratio of government guarantees provided by central government on debt of non-government units, as a percentage of GDP, is shown in figure 9. At the end of 2019, the amount of government guarantees as a percentage of GDP exceeded 10 % for four countries (Denmark, France, Luxembourg and Finland) out of 22 countries for which data is available. At the end of 2018, the amount of guarantees in Germany and Austria exceeded 10% of GDP (latest year available for both countries). 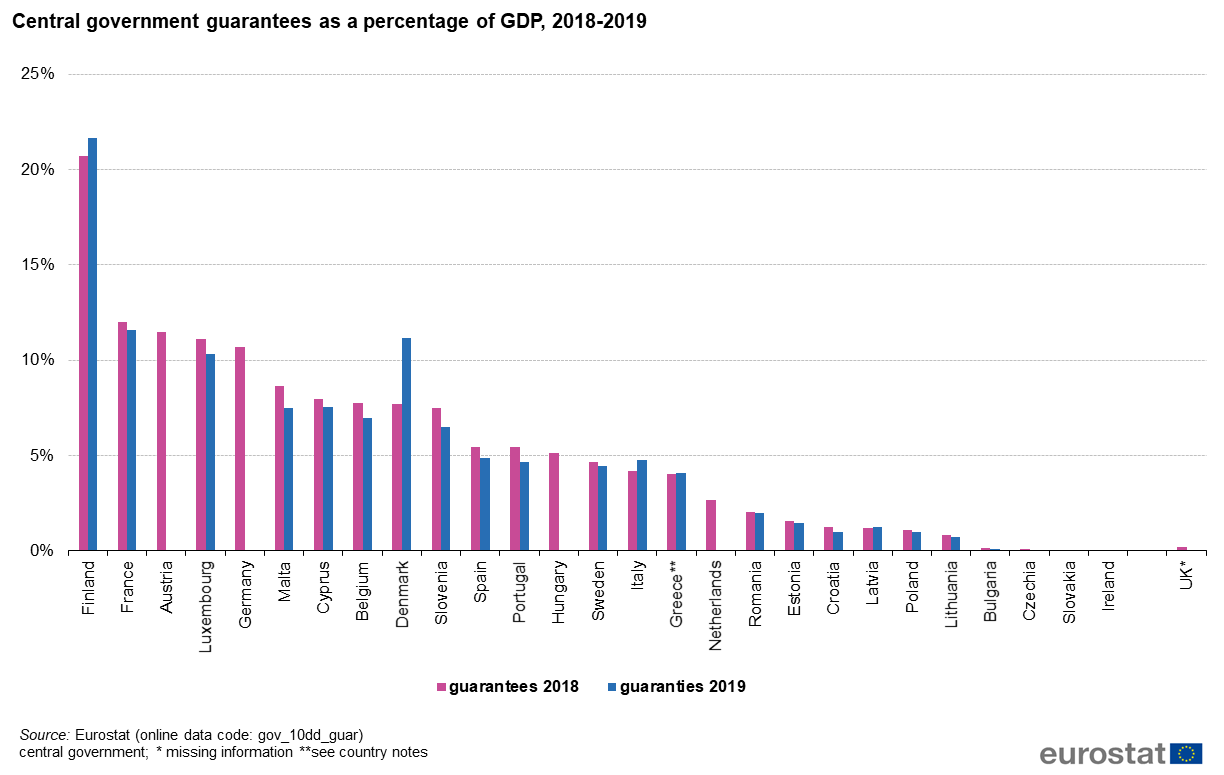 The market value is the price as determined dynamically by buyers and sellers in an open market.

In Council Regulation (EC) No 479/2009, as amended, the face value is used. This is equal to the undiscounted amount of the principal that the government will have to pay to creditors at maturity.

Debt figures on general government statistics and each of its subsectors are reported consolidated.

Consolidation is a method of presenting statistics for a grouping of units, such as institutional sectors or sub-sectors, as if it constituted a single unit. Consolidation thus involves a special kind of cancelling out of flows and stocks: eliminating those transactions or debtor/ creditor relationships that occur between two transactors belonging to the same grouping. Usually the sum of subsectors should exceed the value of the general government sector. Subsector data should be consolidated within each subsector, but not between them. ESA 2010 recommends compiling both consolidated and non-consolidated financial accounts. For macro-financial analysis, the focus is on consolidated figures. The Maastricht debt is also consolidated.

The survey presents breakdowns for the general government and its subsectors for the two previous calendar years, categorising the debt by sector of the debt holder, by instrument, by detailed initial and remaining maturity, by currency of issuance, as well as guarantees granted by the government to non-government units. The latter are contingent liabilities. In addition, the survey contains information on the market value of Maastricht debt instruments as well as on the apparent cost of government debt.

Some countries return the questionnaire for more than two calendar years.

For the EU-27 and EA-19, data from ESA table 28 (quarterly government debt) supplied in April 2020 is used to complement the analysis. For all countries, the data reported in the structure of government debt survey corresponds to the general government gross debt totals submitted in the context of the April 2020 Excessive Deficit Procedure notification.

For all 27 EU Member States, the United Kingdom and Norway, the data used in this article was reported in the structure of government debt survey. The survey is not fully completed by all countries. Hence the number of countries shown for each breakdown of gross debt as well as guarantees varies.

The analysis on breakdown by currency, apparent cost of the debt and state guarantees is based on central government data.

The most recent GDP supplied to Eurostat is used in the graphs and analysis.

The coverage of guarantees may still vary across countries and have an expanding coverage over time.

Some breakdowns of gross debt by debt holder by detailed maturity, by sector of debt holder and by currency may not sum to the total debt instrument/ gross debt, in case detailed information was not available for some items.

The United Kingdom: The initial maturity of a share of currency and deposits could not be determined. For this reason, shares shown do not add up to 100%.

Denmark: The coverage of data relating to the remaining maturity of central government gross debt is limited to debt securities.

Monitoring and keeping government debt in check is a crucial part of maintaining budgetary discipline which is essential as Europe undergoes dramatic demographic changes. Its ageing population, in particular, is expected to pose major economic, budgetary and social challenges.

The Protocol on the excessive deficit procedure (EDP) annexed to the Maastricht Treaty specifies that the ratio of gross government debt to GDP must not exceed 60 % at the end of the preceding fiscal year. The application of the Protocol is made operational by Council Regulation (EC) No 479/2009, as amended.

Fiscal data are compiled in accordance with national accounts rules, as laid down in the European System of Accounts (ESA 2010) adopted in the form of a Regulation (EU) No 549/2013 of the European Parliament and of the Council of 21 May 2013. The full text of compilation of General government debt data complies with ESA 2010 rules concerning the sector classification of institutional units, the consolidation rules, the classification of financial transactions and of financial assets and liabilities and the time of recording. The valuation is however different. Debt liabilities in ESA 2010 are valued at market value, whereas Maastricht debt is valued at nominal (face) value. Most data in the publication on the structure of government debt refer to general government gross debt (and various breakdowns) expressed at face value.