This article focuses on a selection of indicators on quarterly sector accounts for households in the European Union (EU) and the euro area. Covered are, among others, the household saving rate and the household investment rate. Another article focuses on quarterly sector accounts for non-financial corporations, covering, among others, the business investment rate and the profit share of non-financial corporations.

These data come from a detailed set of seasonally adjusted[1]quarterly European sector accounts released by Eurostat, the statistical office of the European Union and the European Central Bank (ECB).

In the euro area in the third quarter of 2020, in nominal terms, household income [2] increased by 4 % while consumption increased by not less than 11.7 % and investment (gross fixed capital formation, mostly in dwellings) increased remarkably by 15.1 %. 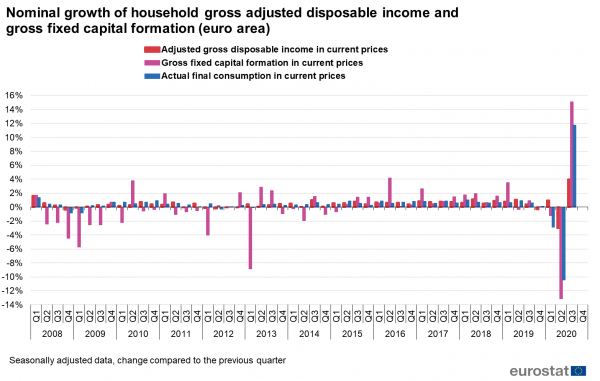 The compilation of the European sector accounts follows the European System of Accounts 2010 (ESA 2010) and covers the period from the first quarter of 1999 onwards.

Institutional sectors bring together economic units with broadly similar characteristics and behavior, namely: households (including non-profit institutions serving households), non-financial corporations, financial corporations, government and the rest of the world. In the latter, to measure the external transactions of the euro area / EU, it is necessary to remove cross-border flows within the area concerned.

Eurostat's website includes detailed annual sector accounts by country and derived key indicators, which also include the indicators that combine non-financial and financial accounts such as debt-to-income ratios.
The full set of quarterly sector accounts is published for euro area / EU aggregates. Quarterly sector accounts data are also available for most of the European Economic Area (EEA) Member States in the Eurostat database, and a subset of quarterly key indicators is published around 102 days after each quarter at Quarterly data. The EEA members whose GDP is below 1% of the EU total do not have to transmit the quarterly accounts of households to Eurostat.