This article highlights the development of natural gas prices for household and non-household consumers within the European Union (EU); it also includes price data from the United Kingdom, Liechtenstein, North Macedonia, Serbia, Turkey, Bosnia and Herzegovina, Moldova, Ukraine and Georgia.

The price of energy in the EU depends on a range of different supply and demand conditions, including the geopolitical situation, the national energy mix, import diversification, network costs, environmental protection costs, severe weather conditions, or levels of excise and taxation. Note that prices presented in this article include taxes, levies and VAT for household consumers but exclude refundable taxes and levies and VAT for non-household consumers.

Highest gas prices in Sweden, Spain and the Netherlands

For household consumers (defined for the purpose of this article as medium-sized consumers with an annual consumption between 20 Gigajoules (GJ) and 200 GJ), natural gas prices during the second half of 2019 were highest among the EU Member States in Sweden, Spain and the Netherlands (see Figure 1), and lowest in Romania, Hungary and Latvia. The price of natural gas for households in Sweden (EUR 0.1167 per kWh) was more than three times the price that was charged in Romania (EUR 0.0332 per kWh). 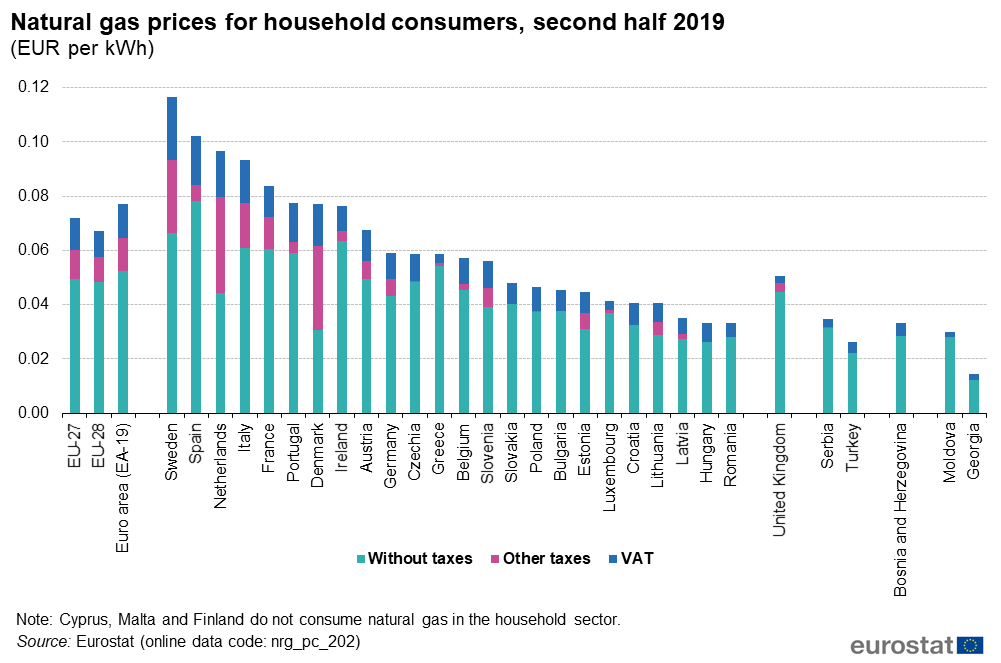 The average price in the EU-27 — a weighted average using the most recent (2018) data for natural gas consumption by household consumers — was EUR 0.0720 per kWh.

The development of natural gas prices for household consumers in the EU-27 since the first half of 2008 is presented in Figure 2. Generally, these prices are higher in the second semester of each year. This is due to the seasonal effect. Overall there was an upward trend in natural gas total prices in the EU-27 from a low EUR 0.0558 per kWh in the second half of 2009 to a peak of EUR 0.0746 per kWh in the second half of 2013. It decreased from 2013 to 2017 but started increasing again in 2018 until now. The price without taxes for the second semester of 2019 is below the price without taxes of the first semester 2008 adjusted for inflation despite the fact that the first semester prices are generally lower than the second semester prices. However, when including taxes, the decrease is less pronounced, since the weight of the taxes increased from 25 % in 2008 to 31 % in 2019. 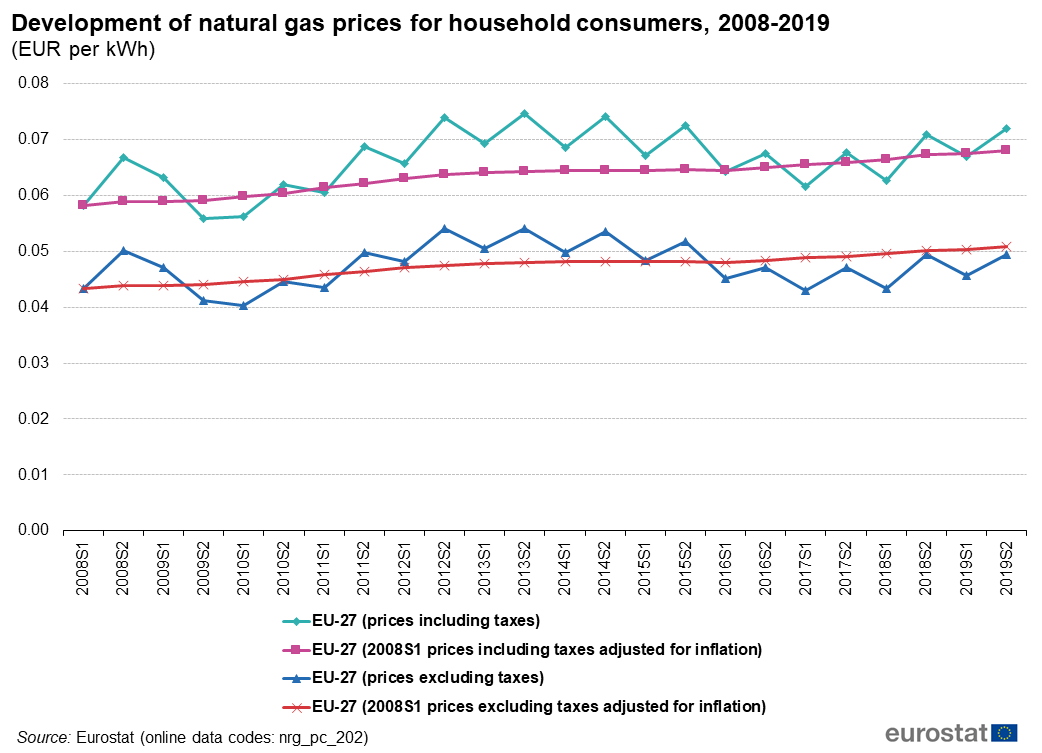 Weight of taxes and levies differs greatly between Member States

The proportion of taxes and levies in the overall natural gas retail price for household consumers is shown in Figure 3. The relative tax contribution in the second half of 2019 was smallest in Greece (7.8 %) where a low VAT rate is applied to the basic price. The highest taxes were charged in Denmark where 60.2 % of the final price was made up of taxes and levies, with this share also exceeding half of the price in the Netherlands (54.0 %). The VAT in the EU-27 represents 16.4 % of the total price. It ranges from 5.5 % in Greece to 21.3 % in Hungary 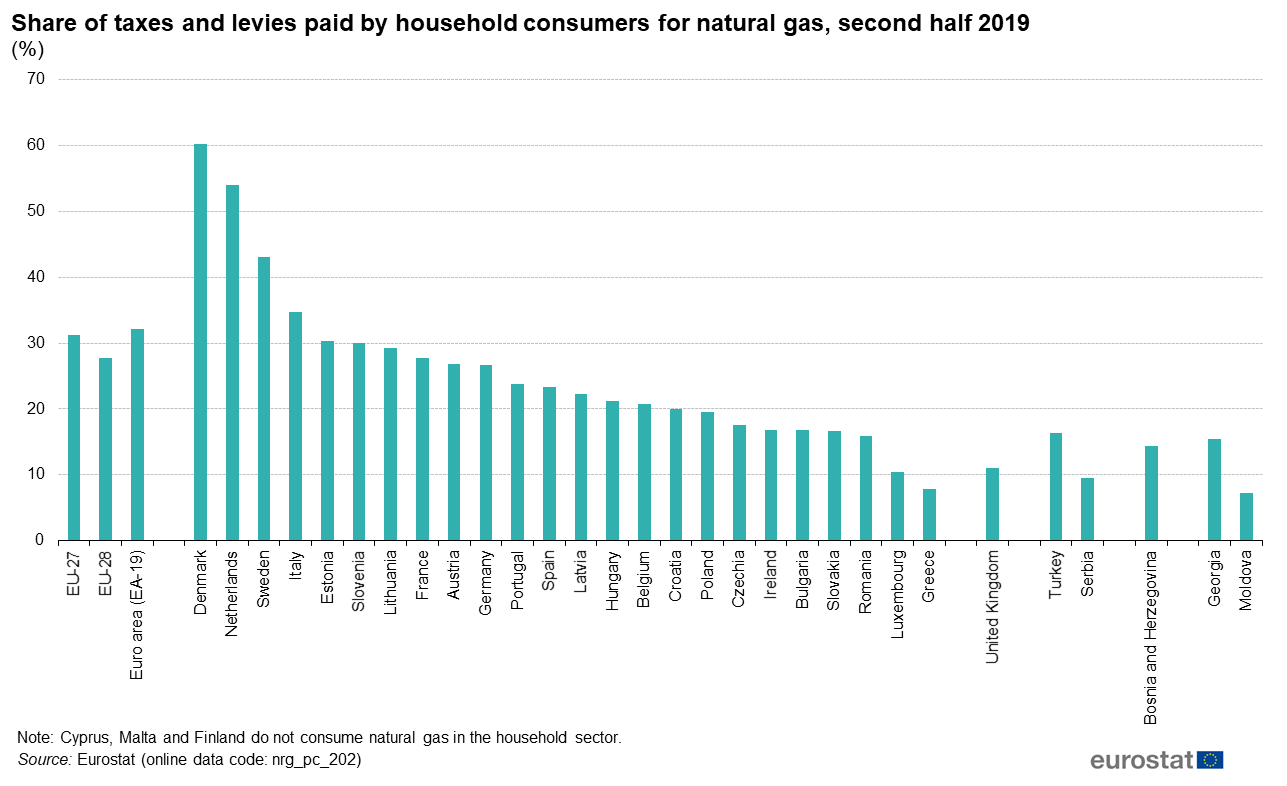 Figure 3: Share of taxes and levies paid by household consumers for the natural gas, second half 2019 (%)
Source: Eurostat (nrg_pc_202)

Largest increases in gas prices for household consumers in Bulgaria, Latvia and Estonia 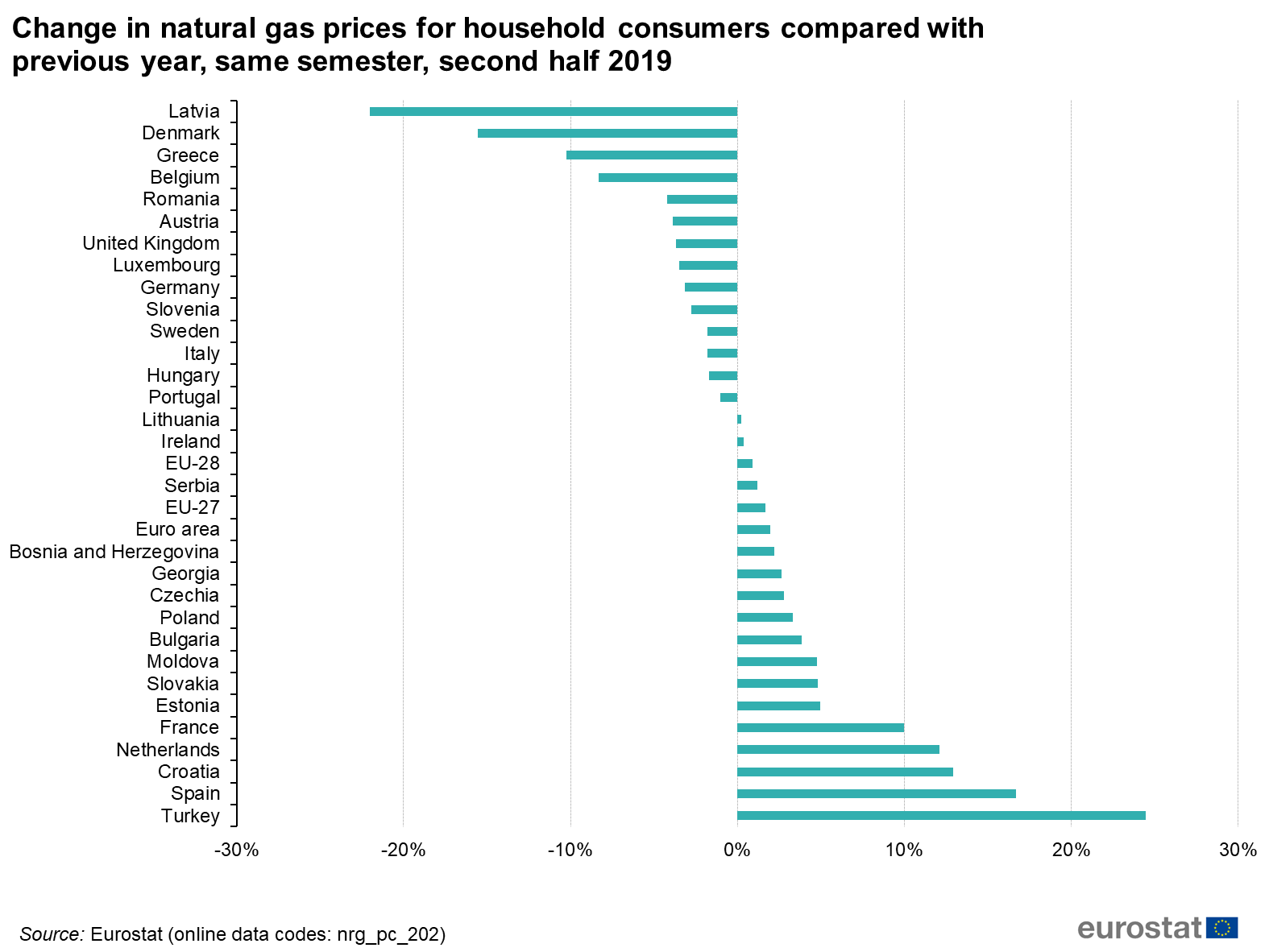 Gas prices for non-household consumers highest in Finland and Sweden

The EU-27 average price — a weighted average using the most recent (2017) data for natural gas consumption by non-household consumers — was EUR 0.0308 per kWh. 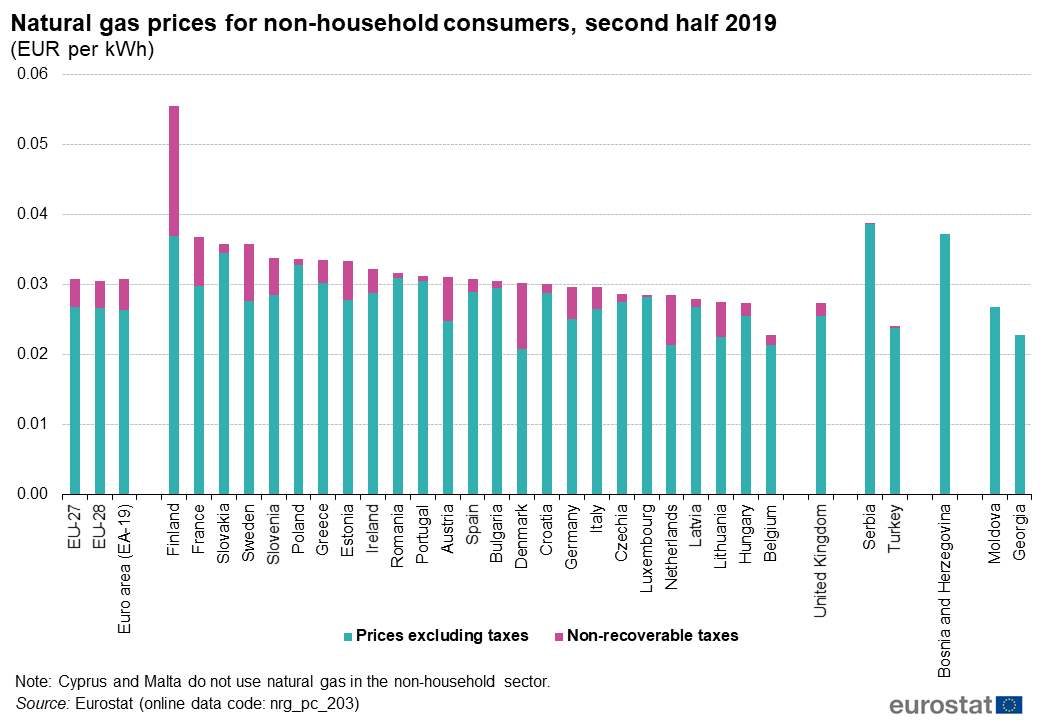 The development of natural gas prices for non-household consumers in the EU-27 since the first half of 2008 is shown in Figure 6. These prices display the same trend as observed for household consumers (see Figure 2) but without the seasonal effect. After falling to EUR 0.031 per kWh in the second half of 2009, the natural gas total price for non-household consumers increased each half year to peak at EUR 0.042 per kWh in the first half of 2013. Since then, it decreased every semester and reached EUR 0.029 in the second half of 2017. The latest data shows a significant increase that started in the first semester of 2018 except for the very last period reported. The weight of the taxes have increased from around 7 % in 2008 to around 13 % in 2019. When compared to the overal inflation, the price for the second semester of 2019 is much lower than the price of the first semester of 2008 adjusted for inflation (26 % lower than if the price strictly followed the inflation) 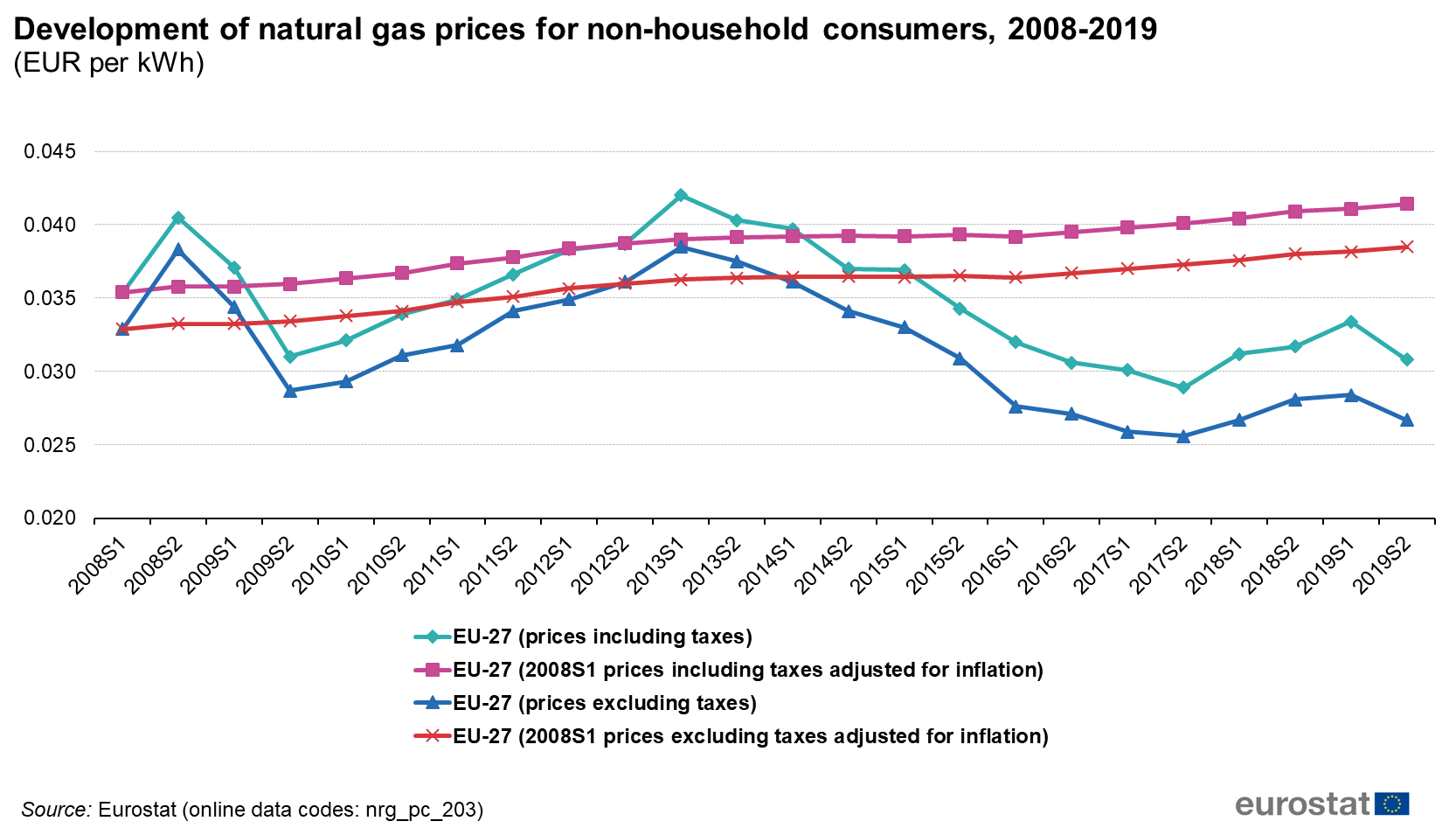 The proportion of taxes and levies that cannot be recovered by non-household consumers in the overall natural gas price is presented in Figure 7. For non-household consumers, the share of taxes in the first half of 2019 was lowest in Luxembourg (0.7 %), Romania and Portugal (both at 2.2 %). The highest shares of taxes were registered in Finland (33.5 %), Denmark (31.5 %) and the Netherlands (25.0 %). 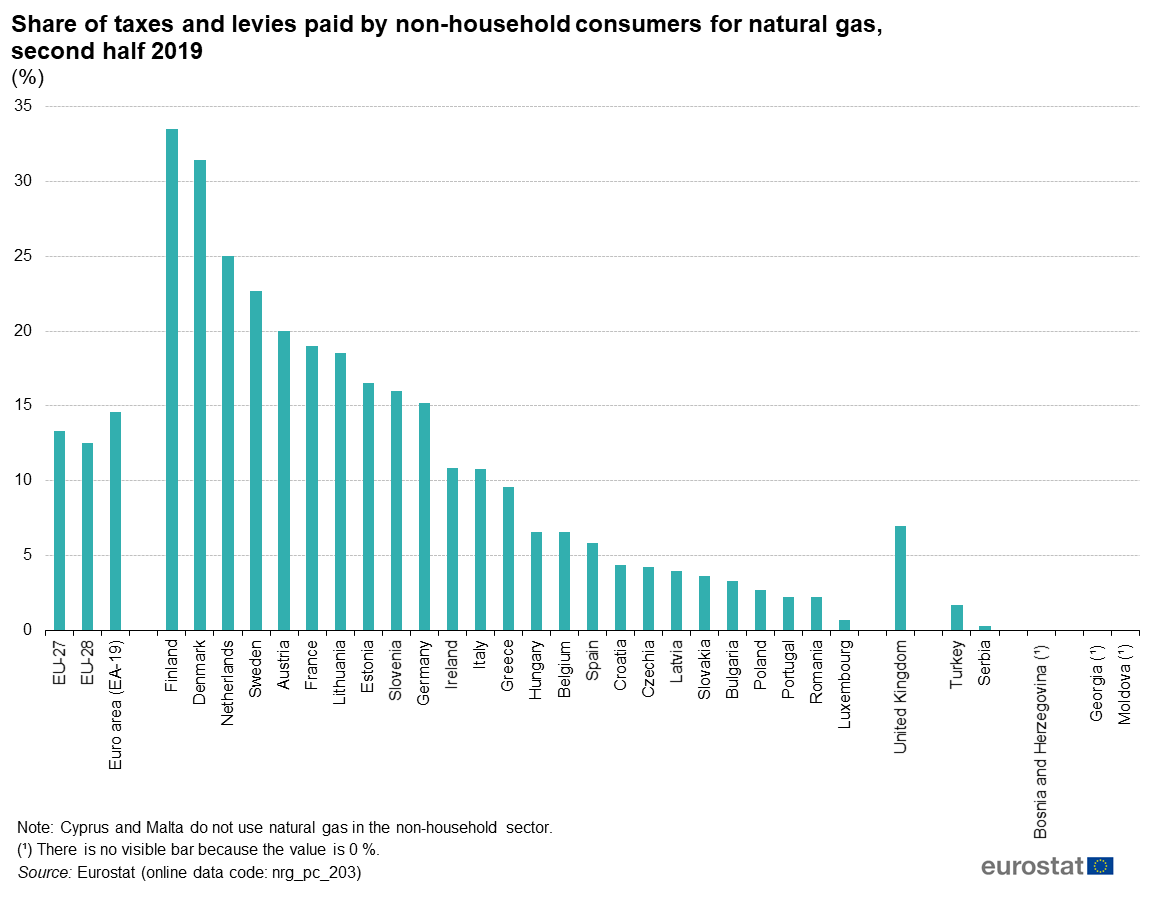 Figure 7: Share of taxes and levies paid by non-household consumers for the natural gas, second half 2019 (%)
Source: Eurostat (nrg_pc_203) 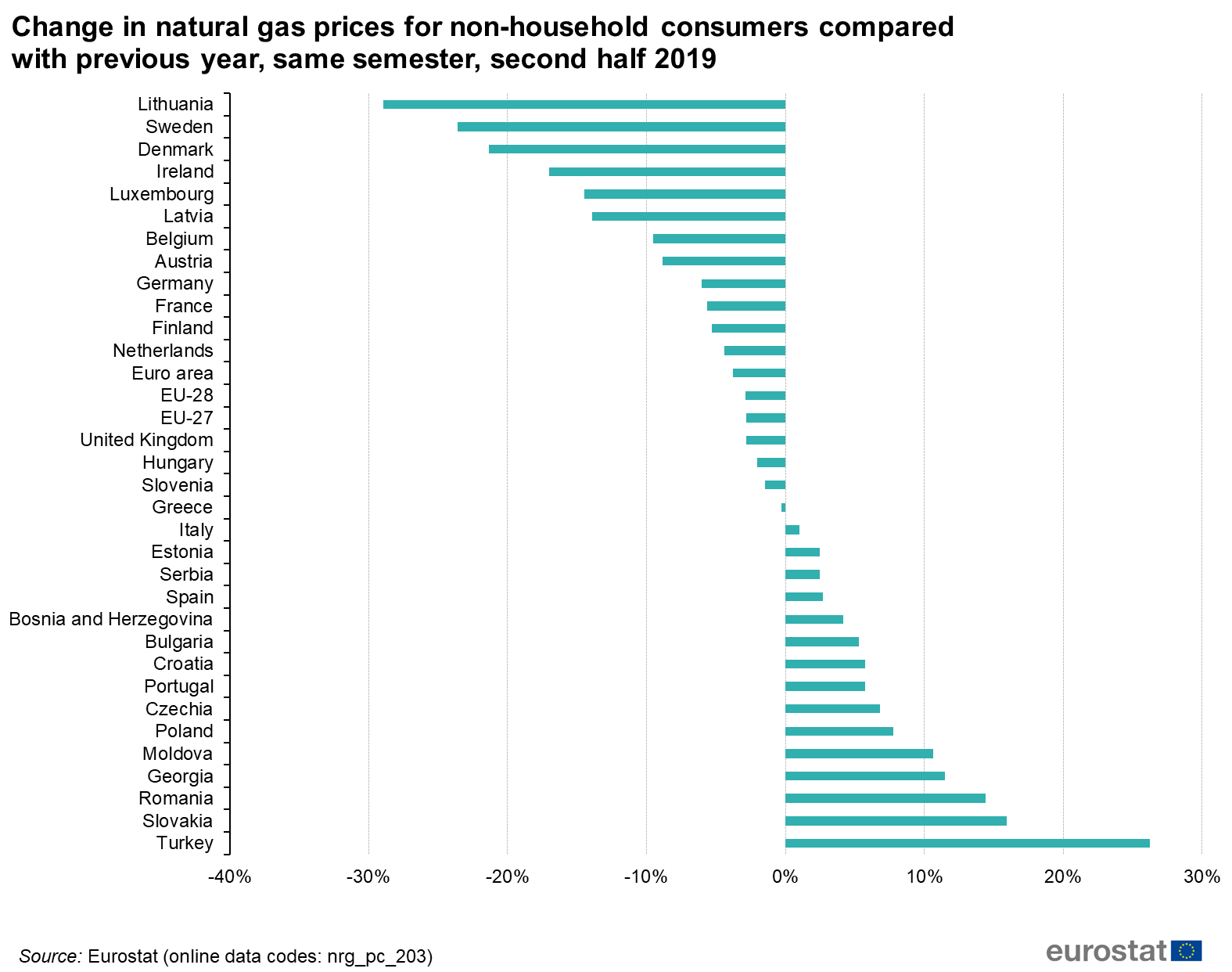 Prices in national currencies are converted into euro using the average exchange rate of the period for which the prices were reported.

Prices are always compared with the prices of the same semesters (i.e. year on year) in order to avoid seasonal effects.

The prices collected cover average prices over a period of six months (a half-year or semester) from January to June (first semester) and from July to December (second semester) of each year. Prices include the basic price of natural gas, transmission and distribution charges, meter rental, and other services. Natural gas prices for household consumers presented in this article include taxes, levies, non-tax levies, fees and value added tax (VAT) as this generally reflects the total price paid by household consumers. As non-household consumers are usually able to recover VAT and some other taxes, prices for non-households consumers are shown without VAT and other recoverable taxes/levies/fees. The unit for natural gas prices is that of euro per kilowatt-hour (EUR per kWh).

The price and reliability of energy supplies are key elements in a country’s energy supply strategy. Natural gas prices are of particular importance for international competitiveness, as natural gas might represent a significant proportion of total energy costs for industrial and service-providing businesses. Contrary to the price of fossil fuels, which are usually traded on global markets with relatively uniform prices, electricity prices vary widely among EU Member States.

The EU has acted to liberalise electricity and gas markets since the second half of the 1990s. Directives adopted in 2003 established common rules for internal markets for electricity and natural gas. Deadlines were set for opening markets and allowing customers to choose their supplier: as of 1 July 2004 for business customers and as of 1 July 2007 for all consumers (including households). Some EU Member States anticipated the liberalisation process, while others were much slower in adopting the necessary measures. Indeed, significant barriers to entry remain in many electricity and natural gas markets as seen through the number of markets that are still dominated by (near) monopoly suppliers.

In 2008, the European Commission Facing the challenge of higher oil prices (COM(2008) 384), called on the EU to become more efficient in its use of energy, and less dependent on fossil fuels — in particular, by following the approach laid out in the climate change and renewable energy package.

In July 2009, the European Parliament and Council adopted the third energy package (legislative package composed of 2 directives and 3 regulations) aimed at ensuring a real and effective choice of suppliers, as well as benefits for customers. One of the regulations was about the establishment of an agency for the Cooperation of Energy Regulators by 2011.

In May 2013, the European Council called on the Commission to carry out an in-depth analysis of the evolution of energy prices and costs in Europe.

In 2014, the European Commission, in response to the European Council request, prepared an in-depth analysis of energy prices and costs in Europe, to help policy makers understand the background context, the impact of recent price rises on consumers and the political implications. This report illustrated high global energy prices, with prices diverging considerably across EU Member States, and significantly higher for Europe than for its international trading partners, particularly the United States. Retail prices had risen more than wholesale prices because of increases in network price components and taxes and levies. Data weaknesses led to the recommendation to improve the detail, transparency and consistency of energy price data collection and to the Commission’s proposal and the adoption of Regulation (EU) No 2016/1952. It was also decided that such a report would be prepared every 2 years. The European Commission thus published such a report also in 2016 and 2018.

It is thought that increased transparency for gas and electricity prices should help promote fair competition, by encouraging consumers to choose between different energy sources (oil, coal, natural gas and renewable energy sources) and different suppliers. Energy price transparency can be made more effective by publishing and broadcasting as widely as possible prices and pricing systems.