The labour cost index (LCI) shows the short-term development of the labour cost, the total cost on an hourly basis of employing labour. In other words, the LCI measures the cost pressure arising from the production factor “labour”. This article takes a look at the most recent evolutions of the LCI, both at the level of the European Union (EU) and the Member States.

In addition, Eurostat estimates of the annual labour cost per hour in euros are provided for EU Member States as well as the whole EU. They were obtained by combining the four-yearly Labour cost survey (LCS) with the quarterly labour cost index. Since the release in April 2013, these figures have been moved to a separate article on hourly labour costs.

Eurostat publishes labour cost index data broken down by economic activities defined in sections B to S of the Statistical classification of economic activities in the European Communities (NACE Rev 2). The aggregate B to S is referred to as the "whole economy" for the purpose of simplification. For the EU and EA aggregates, these series are available from 2008 onwards. 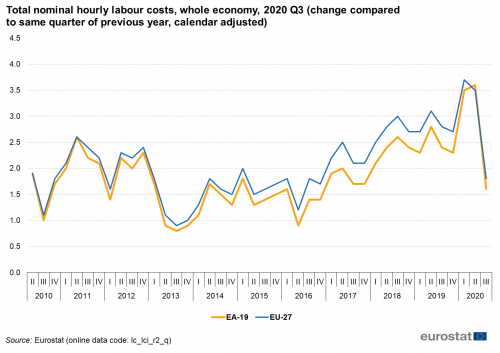 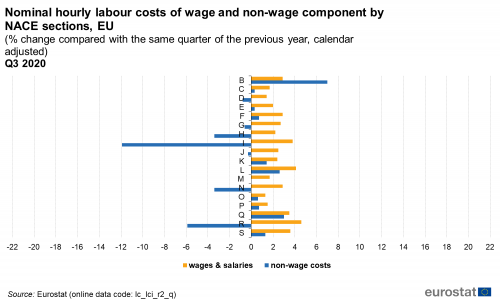 Since the release in April 2013, these figures have been moved to a separate article on hourly labour costs.

The labour cost index is defined as the Laspeyres index of labour costs per hour worked, chain-linked annually and based upon a fixed structure of economic activity at NACE Rev.2 section level. The current reference year of the index is 2016. In addition to the index numbers, annual and quarterly growth rates of labour cost are also calculated.

Since annual or even 4-yearly benchmark surveys, as well as estimation methods, play an important role for the production of quarterly LCI figures in most Member States, revisions are frequent and can go back several years.

Recording of COVID-19 support schemes: the main schemes introduced by EU governments to alleviate the impact of the COVID-19 pandemics on enterprises and employees consist of short-term work arrangements and temporary lay-offs. In most cases, schemes are recorded as subsidies (or tax allowances) recorded with a negative sign in the non-wage component of the labour cost index. However, when the government directly compensates the employees without channelling the support through the employer, the corresponding amounts are not recorded in labour cost statistics. Detailed guidance on the recording of government schemes related to the COVID-19 crisis in labour cost statistics can be found here.

For some Member States, COVID19-related support schemes may not have been recorded in full in the non-wage component of the labour cost, which may lead to revisions in the next release to be issued on 18 March 2021. Please note in particular that the data for the third quarter of 2020 are flagged provisional for most of the countries.

EU aggregates are obtained as weighted aggregates of the national data. The weights reflect the share of labour costs that each Member State has in the total EU aggregate. While the LCI itself is compiled in national currency and thus not influenced by exchange rate movements, the share of the Member State for the EU aggregates is measured in euro and can therefore vary according to the value of the national currency against the euro. In practice, these variations are however very small and have no influence on the comparability of the LCI series over time.

Eurostat has labour cost index data available for all Member States, the euro area and the EU on a quarterly basis from the year 2000 on. Data are broken down by cost items (Total cost, Wages and salaries, Other labour costs) and by economic activity (NACE sections). Index numbers and growth rates are made available for the total cost index as well as for the subdivisions wages and salaries and non-wage labour cost by economic activity.

In the news release, the following NACE aggregations are published:

In the database, all series are available in calendar adjusted form; this means that differences in hourly labour cost which arise due to a varying number of working days are corrected for. Also, all series are available on a seasonally adjusted basis. Seasonal adjustment corrects for infra-annual variations in the labour cost index which can arise due to recurring events, such as new school and university graduates entering the labour market in the autumn. Quarter-on-quarter growth rates are based on seasonally adjusted data, year-on-year growth rates are based on calendar adjusted data.

New data are released every quarter, about 75 days after the end of the reference quarter.

The labour cost index is an essential part of the range of statistics that are relevant for an understanding of the inflationary process and the cost dynamics in the economy.

Information on labour costs is required for economic and monetary policies, wage bargaining and economic analyses. Labour costs are an important potential source of inflation since they account for a large proportion of the total costs borne by private businesses, which may pass higher labour costs, in particular if not reflected in higher productivity, on to consumers via higher end prices, thus fuelling inflation. A timely labour cost index is therefore of utmost importance for the European Central Bank (ECB) in order for it to be able to monitor inflation in the euro area.