Acquisitions of citizenship per 1000 persons, 2018

This article presents recent statistics on the acquisition of citizenship in the European Union (EU).

Of those acquiring citizenship of an EU-27 Member State, 84 % had previously been citizens of non-EU countries. Of these, citizens of Morocco made up the highest numbers, followed by citizens of Albania, Turkey and Brazil. 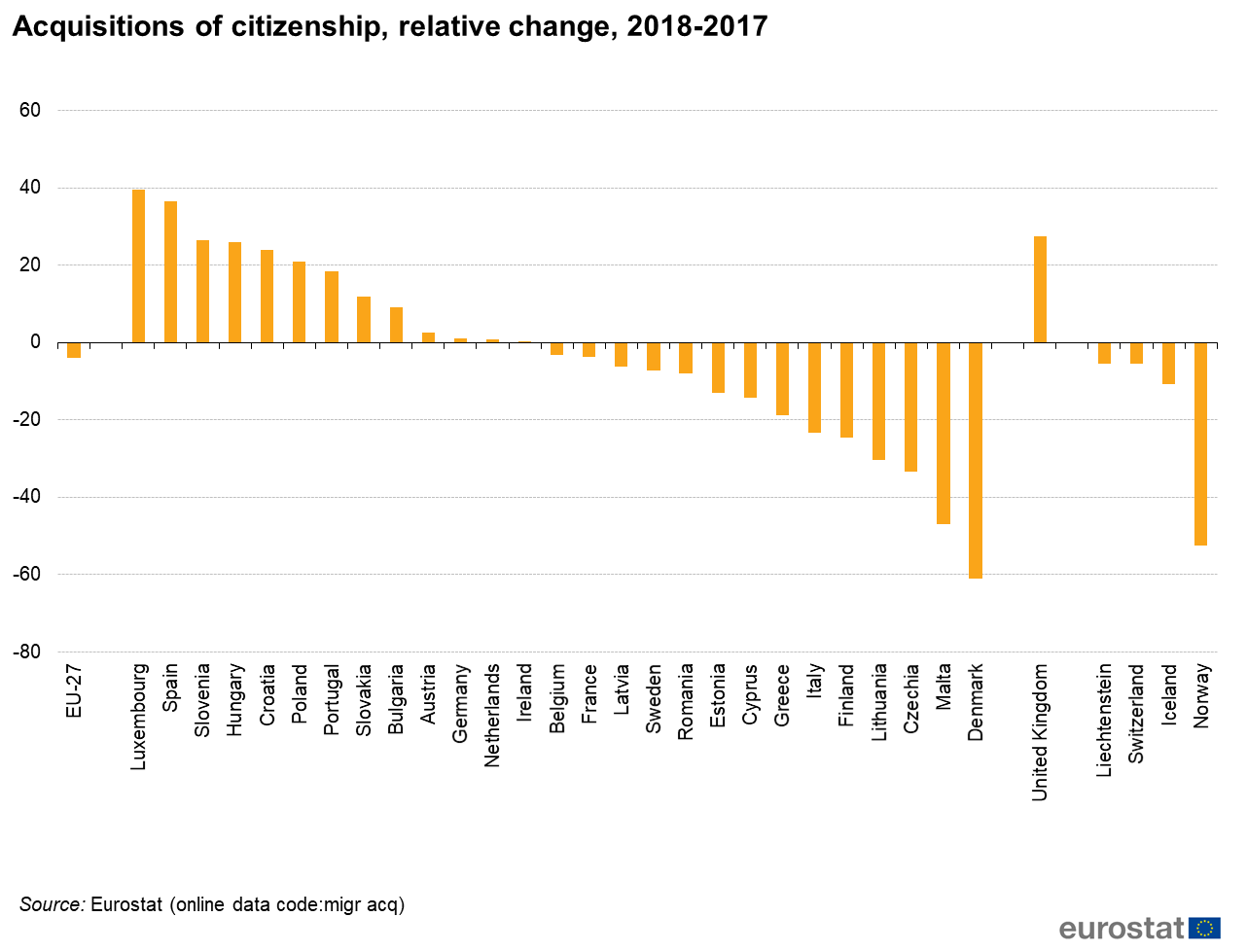 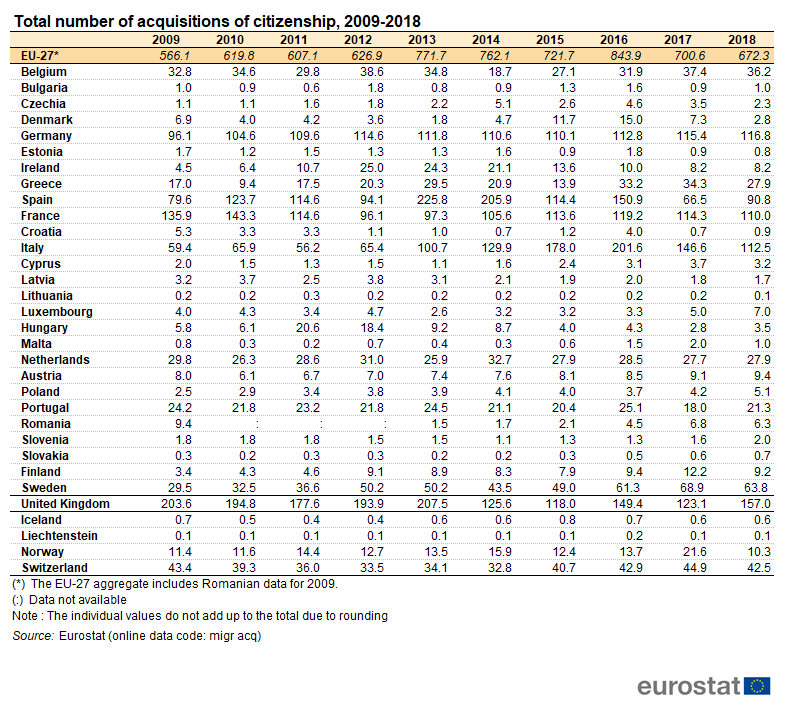 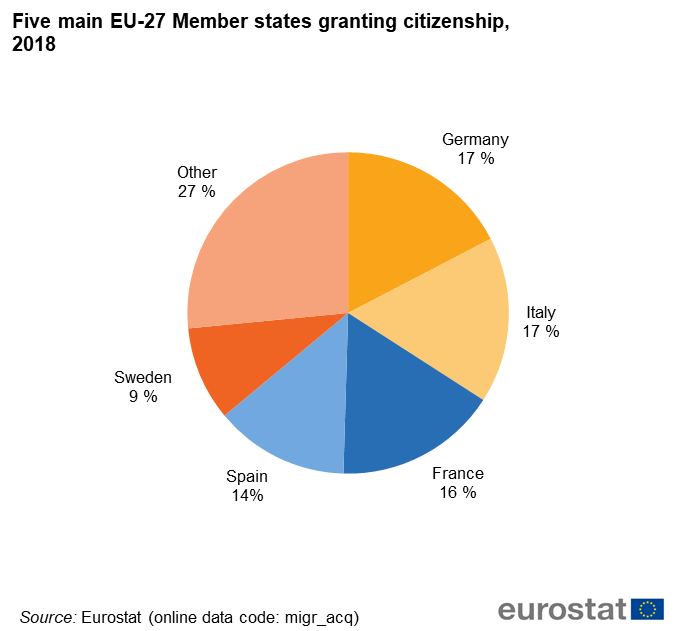 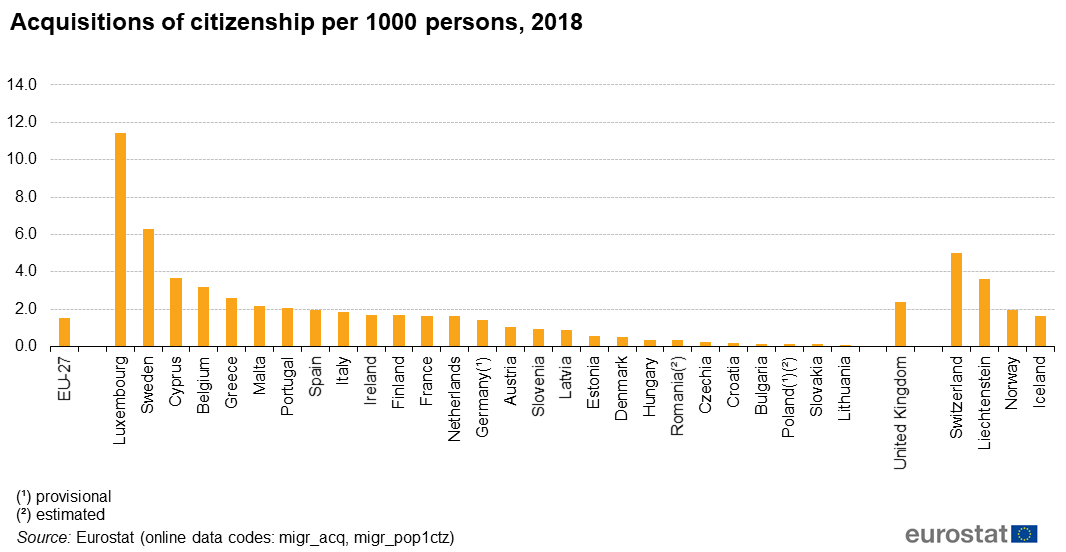 In relation to the population, the highest number of citizenships were granted by Luxembourg (11.4 per thousand persons) followed by Sweden (6.3) and Cyprus (3.7). (See figure 4) 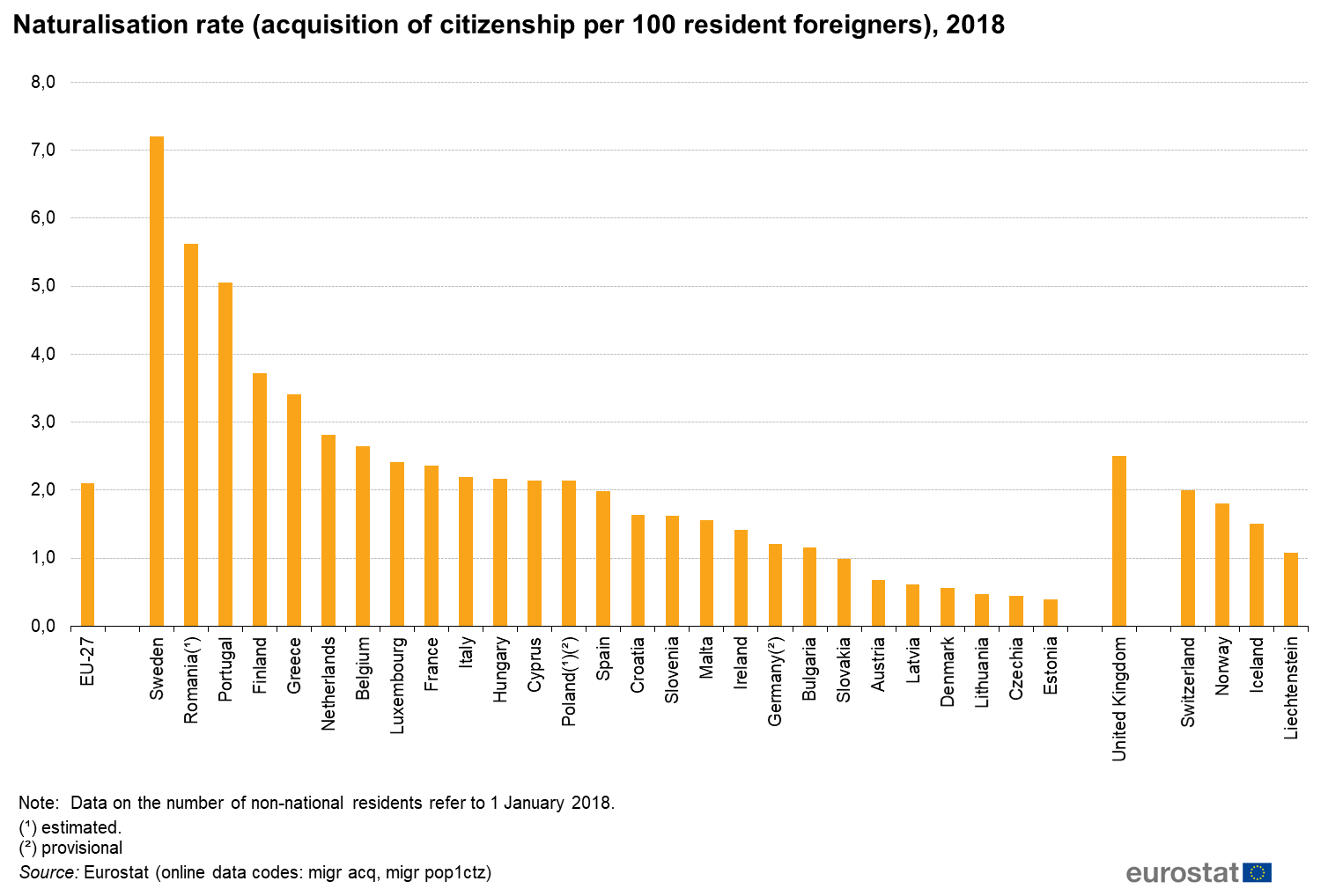 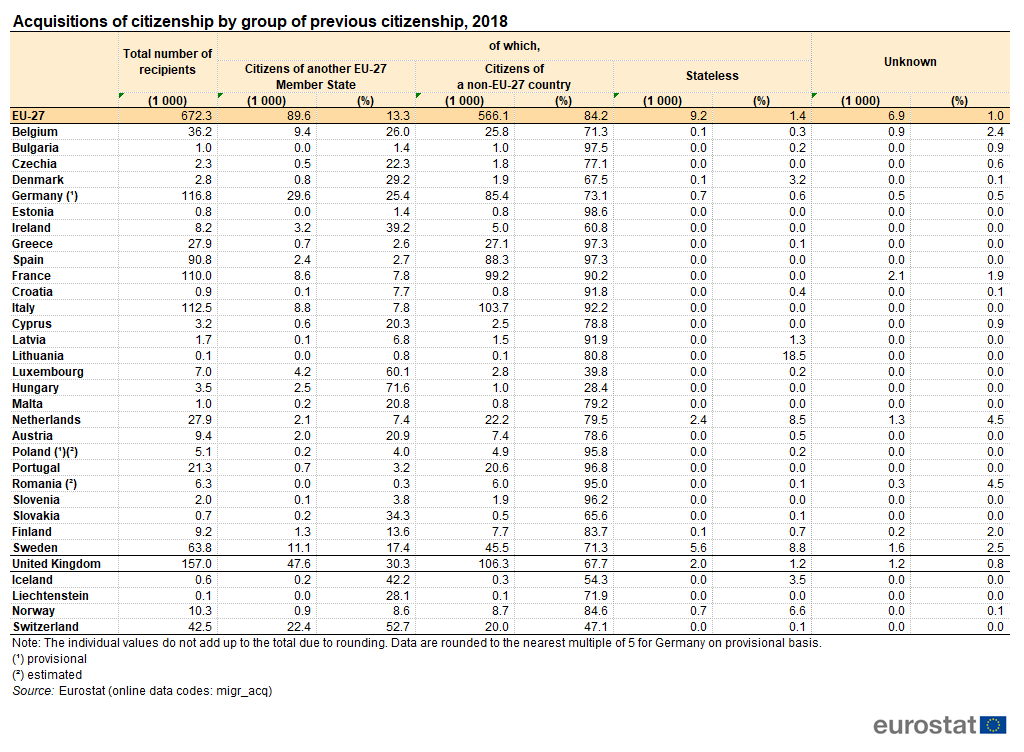 Only in Luxembourg and Hungary were the majority of new citizenships granted to citizens of another EU Member State. In the case of Luxembourg, Portuguese citizens accounted for the largest share, followed by French, Italian and Belgian citizens, in the case of Hungary EU nationals acquiring citizenship were almost exclusively Romanians.(see table 2) 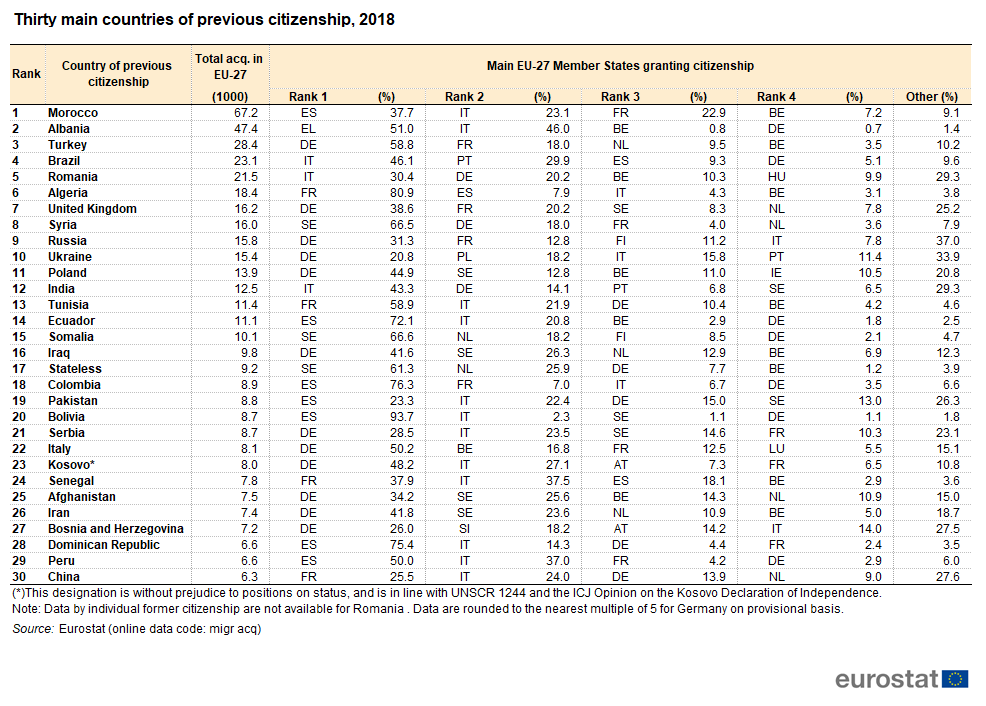 A quarter of new EU citizens were Moroccans, Albanians, Turks and Brazilians 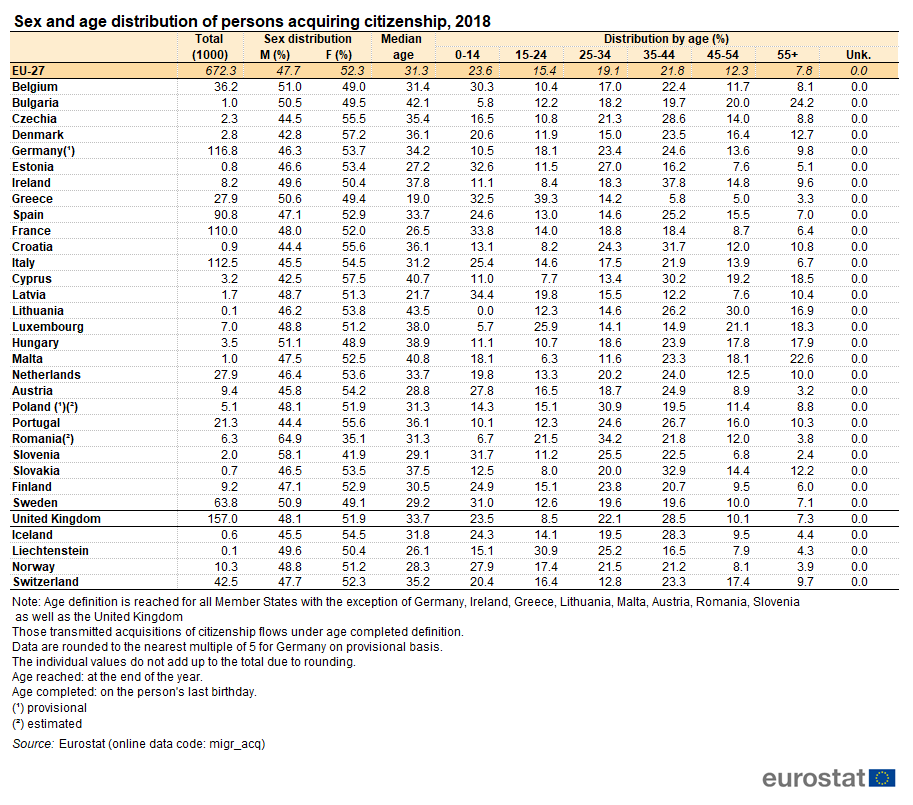 Half of those changing citizenship were aged 31 or less

In 2018, the median age of persons acquiring citizenship in the whole of the EU was 31. The Member State with the lowest median age was Greece; half of its new citizens were younger than 19. The highest median age (44) was in Lithuania.

Age distribution varied from one Member State to another due to differences in citizenship legislation and age structure of the non-national population (see Data sources). However, the common feature uniting all Member States was that most new citizenships were acquired by younger people, and that the numbers declined with age.

The proportion of citizenship acquisitions by children (0-14) was highest in Latvia (34 %) and France (34 %) and lowest in Lithuania (0 %). In Luxembourg, no children(0-10) were granted citizenship.

Bulgaria and Malta accounted for the highest share of grants of citizenship to persons aged 55 or older (24 % and 23 %, respectively), followed by Cyprus (19 %). The lowest shares of elderly new citizens were recorded in Greece (3 %), Austria (3 %) and Slovenia (2 %).

Figure 6: Distribution by sex and age of persons acquiring citizenship in the EU-27, 2018
Source: Eurostat (migr_acq)

Observed by age, there are two distinct peaks in terms of the predominance of acquisitions by women: one in the age group 25-29 and another one among those aged 30-34.

Eurostat produces statistics on a range of issues related to acquisitions of citizenship, international migration flows and migrant population stocks. Data are collected on an annual basis and are supplied to Eurostat by the national statistical authorities of the EU Member States.

The collection of data on acquisition of citizenship is defined by Regulation (EC) No 862/2007 and breakdowns and composition of the EU, EFTA and candidate countries groups are given in the implementing Regulation (EU) No 351/2010.

Data are rounded to the nearest multiple of 5 for Germany on provisional basis for 2018.

Data by individual former citizenship are not available for Romania for 2017 and 2018.

Age reached: at the end of the year.

Age completed: on the last birthday.

Citizenship: the particular legal bond between an individual and his or her State, acquired by birth or naturalisation, whether by declaration, choice, marriage or other means according to the national legislation. International law does not provide detailed rules, but it recognises the competence of every state in cases like: spouses of citizens, minors adopted by citizens, descendants of citizens born abroad returning to the country of origin of their ancestors, etc. Countries differ considerably in terms of the conditions to be fulfilled to acquire citizenship: in general a period of legally registered residence is required, combined with other factors such as evidence of social and economic integration and knowledge of national languages. Different conditions may apply for persons who were born in the country concerned (jus soli), or who have parents or other relatives with that country's citizenship (jus sanguinis).

Detailed information on the different modes of acquisition of citizenship in force in different countries can be found at the GLOBALCIT website.

The category recognised non-citizen is particularly relevant in the Baltic States.

In July 2006, the European Commission adopted a Communication on policy priorities in the fight against illegal immigration of third-country nationals (COM(2006) 402 final), which aims to strike a balance between security and an individuals’ basic rights during all stages of the illegal immigration process.

In September 2007, the European Commission presented its third annual report on migration and integration (COM(2007) 512 final).

A European Commission Communication adopted in October 2008 emphasised the importance of strengthening the global approach to migration: increasing coordination, coherence and synergies (COM(2008) 611 final) as an aspect of external and development policy. The Stockholm programme, adopted by EU heads of state and government in December 2009, set a framework and series of principles for the ongoing development of European policies on justice and home affairs for the period 2010 to 2014; migration-related issues are a central part of this programme. In order to bring about the changes agreed upon, the European Commission enacted an action plan implementing the Stockholm programme – delivering an area of freedom, security and justice for Europe’s citizens (COM(2010) 171 final) in 2010.

n May 2013, the European Commission published the ‘EU Citizenship Report 2013’ (COM(2013) 269 final). The report noted that EU citizenship brings new rights and opportunities. Moving and living freely within the EU is the right most closely associated with EU citizenship. Given modern technology and the fact that it is now easier to travel, freedom of movement allows Europeans to expand their horizons beyond national borders, to leave their country for shorter or longer periods, to come and go between EU countries to work, study and train, to travel for business or for leisure, or to shop across borders. Free movement potentially increases social and cultural interactions within the EU and closer bonds between EU citizens. In addition, it may generate mutual economic benefits for businesses and consumers, including those who remain at home, as internal obstacles are steadily removed.

The European Commission presented a European Agenda on Migration (COM(2015) 240 final) outlining immediate measures to be taken in order to respond to the crisis situation in the Mediterranean as well as steps to be taken in the coming years to better manage migration in all its aspects on 13 May 2015. The European migration network annual report on immigration and asylum (2016) was published in April 2017. It provides an overview of the main legal and policy developments taking place across the EU as a whole and within participating countries. It is a comprehensive document and covers all aspects of migration and asylum policy by the Directorate-General for Migration and Home Affairs and EU agencies.

On 15th of November 2017, the updated European Agenda on Migration focused on the refugee crisis, a common visa policy, and Schengen. Matters included resettlements and relocations, financial support to Greece and Italy, and facilities for refugees. Objectives included enabling refugees to reach Europe through legal and safe pathways, ensuring that relocation responsibility is shared fairly between Member States, integrating migrants at local and regional levels.

On the 16th of October 2019, the Commission published a progress report on the implementation of the European Agenda on Migration, focusing on key steps required on the Mediterranean routes in particular, as well as actions to consolidate the EU’s toolbox on migration, borders and asylum.

Acquisition of citizenship and migration data