Implemented in Friuli-Venezia Giulia, Italy and Carinthia in Austria, the Bio-Crime project provides a framework for joint actions to stop the spread of zoonoses – diseases transmitted from animals to humans – and illegal trade in animals. Such trade endangers human and animal health by facilitating the spread of zoonoses and poses economic and public safety threats. The project also developed school and law enforcement education and training programmes and  a cross-border bio-crime alert system platform. 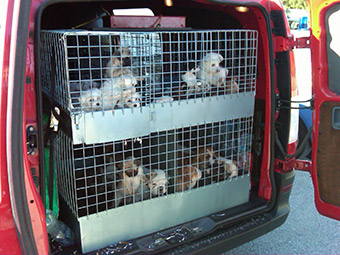 " Transnational organised crime requires a coordinated transnational response and the key feature of the Bio-Crime project is its emphasis on transregional development of best practices and innovative solutions, in particular in the areas of disease prevention programmes for public officials and police, early education for children, crime prevention, cross-border responses and better access to public services. "

Bio-Crime organised a series of 18-day theoretical and practical training courses on animal disease risks and prevention and animal handling for more than 1 000 Italian and Austrian officials and police officers. Further training was held for the Friuli-Venezia Giulia forest police.

The project developed digital tools such as a real-time system for alerting officials about illegal animal trade and a secure web platform for public officials and police. In addition, an educational channel on YouTube and a public website backed by a web traffic analysis system were set up.

Educational programmes for children aged 11-13 on the risks and prevention of zoonoses and human-animal interaction were another element of the project. A questionnaire with an evidence-based medicine approach was drawn up to assess children’s knowledge and the value of the educational programmes. A total of  240 children in Carinthia and 100 in Friuli-Venezia Giulia  took part, the latter on two occasions.

Transnational crime, in which criminal conduct in one country has an impact in another, or even several others, is increasing in the EU. Moreover, the project area includes important transit routes for the illegal trade of pets coming mostly from Eastern Europe. At the same time, the health threats facing the EU are changing ever more rapidly and public administrations need to be much faster in responding to them.

To address the lack of cross-border data sharing and coordination on the illegal pet trade and the spread of zoonoses, as well as low awareness and knowledge of these issues among authorities and the wider public, Bio-Crime deployed three particularly innovative methods.

The first was sentiment analysis, a type of data mining that gauges people’s opinions by using natural language processing, computational linguistics and text analysis to extract and analyse online information. Sentiment analysis software was used to assess perception of zoonotic risks among children taking part in the educational programmes.

The second was the implementation of an evidence-based medicine approach in school education programmes. The project demonstrated that more than 30 % of children in the two regions lack knowledge of zoonoses and correct human-animal interaction. Finally, as most bioterrorism agents are zoonotic, protocols were developed to investigate the origin and ability to cause disease of zoonotic pathogens, to protect the public against attacks.

Total investment for the project “Bio-Crime” is EUR 1 117 300, with the EU’s European Regional Development Fund contributing EUR 949 705 through the “Interreg V-A - Italy-Austria” Operational Programme for the 2014-2020 programming period.