An apple a day keeps birch pollen allergy away

The AppleCare project has developed a healthy and time-saving alternative to synthetic long-term immunotherapy to cure birch pollen allergy. Doctors and researchers from the cross-border area of Italy and Austria collaborated to develop a strategic diet for allergy sufferers to cure themselves at home, simply by eating apples. 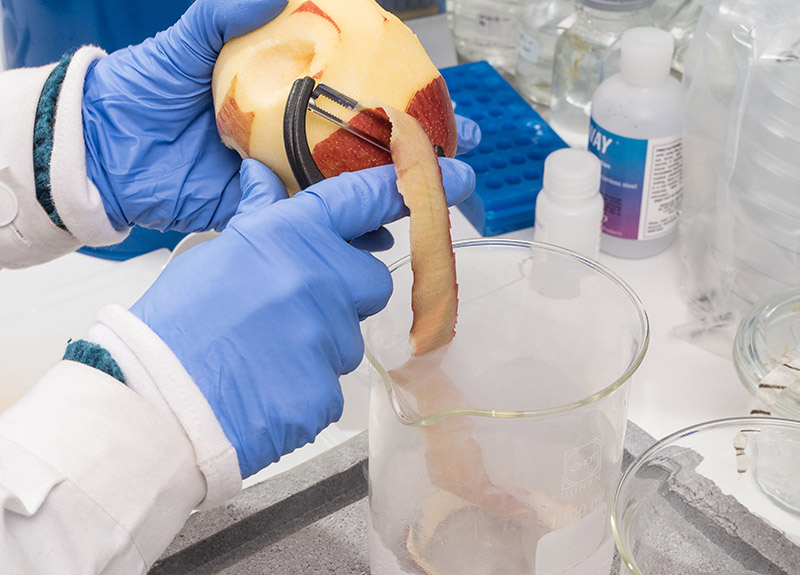 The peel of different apple varieties was shock-frozen to test for the expression of allergen-related genes. ©Laimburg Research Centre/ Thomas Letschka (2019)

" Patients who underwent this treatment in a preliminary study were not only able to eat apples without any symptoms afterwards, but also other fruits, nuts and vegetables they used to avoid due to the cross-allergy effects. "

Spearheaded by the Laimburg Research Centre in Italy, the project identified certain apple varieties that contain specific allergen dosages as the foundation of a diet that, over time, could successfully treat and cure pollen allergy.

The project created  an interregional database of allergy patients that not only helped the project recruit volunteers for clinical tests, but will also serve as the basis for new, joint projects and activities. In doing so, a project like AppleCare directly promotes cross-border collaboration and innovation.

AppleCare started its mission in South Tyrol, in northern Italy, by far the largest apple-producing region in Europe. Research institutes from Innsbruck,   the Health Care Service and the Research Centre Laimburg from Bolzano pooled their expertise in medicine, immunology, molecular biology and structural chemistry to identify the apple varieties best suited for a low-allergen diet.

The Laimburg Research Centre tested and analysed the flesh, peel and stem of over 30 regional apple varieties on a molecular and biochemical level to determine their allergen levels. Different apples were tested on allergic volunteers in clinical tests at the hospitals of Bolzano and Innsbruck.

High-resolution 3D analyses performed at the University of Innsbruck confirmed that the apple allergen Mal d1 has a similar composition and structure to the birch pollen allergen Bet v1. Over 70 % of birch pollen allergy sufferers show similar reactions when eating certain types of fruits, especially apples.

In these cases, the human immune system confuses the apple and the birch pollen allergen and causes the same strong reactions to the nose, mouth and throat – known as the oral allergy syndrome.

This led the project partners to believe that hypo-sensibilisation or immunotherapy could be induced by consuming certain types of apples.

The treatment that was subsequently developed – known as ‘the apple therapy’ – involves eating certain apple varieties in a specific quantity and sequence, for a set period. First, allergy-sufferers eat a low-allergenic variety for three months, such as Red Moon® or another red-fleshed variety. This is followed by eating a variety with medium allergy potential for three months, like Pink Lady®. The last step is eating a highly allergenic kind, such as Golden Delicious or Gala, for at least another nine months

Patients who underwent this treatment in a preliminary study were not only able to eat apples without any symptoms afterwards, but also other fruits, nuts and vegetables they used to avoid due to the cross-allergy effects.

Most of all however, patients suffered from significantly fewer hay fever symptoms in spring. These results are now to be confirmed in a large-scale clinical study.”

Until recently, one of the most efficient therapies to treat birch pollen allergy required taking synthetic compounds to adapt the human immune system. Although quite effective, the therapy lasts several years and requires frequent hospital visits for injections, making it challenging to stick to.

In Central Europe, 20 % of the population is affected by birch pollen allergy. During the flowering season, the pollen becomes airborne and cause irritations to the eyes, nose, mouth and throat. In Tyrol, allergy is a growing problem, not only because of birch pollen, but also because of the year-round availability of apple varieties, making it the perfect region to develop and test the new therapy.

Total investment for the project “AppleCare - Treat allergy to birch pollen by eating apples” is EUR 799 905, with the EU’s European Regional Development Fund contributing EUR 617 972 through the “Interreg Italy-Austria” Operational Programme for the 2014-2020 programming period. The investment falls under the priority “Research and innovation”.

Department of Dermatology, Venerology and Allergology

Department of Dermatology, Venereology and Allergology