Protection of Places of Worship

Attacks on people exercising their fundamental right to freedom of thought, conscience and religion in churches, mosques, synagogues and other places of worship continue to occur with dreadful consistency across Europe. Nice, Paris, Hanau, Bayonne, Copenhagen, Baerum, Rouen and Halle are the most recent additions to the increasing list of terrorist attacks on places of worship. This article looks into the aspects that need to be considered when planning the physical protection scheme of places of worship.

The freedom of thought, conscience and religion is a fundamental human right tenaciously protected in the EU by legal instruments at the level of international [1], European [2] and individual member state law. Yet, attacks on people exercising this very right in churches, mosques, synagogues and other places of worship continue to occur with dreadful consistency across Europe. Nice, Paris, Hanau, Bayonne, Copenhagen, Baerum, Rouen and Halle are the most recent additions to the increasing list of terrorist attacks on places of worship.

Anticipating, preventing, protecting and responding to malicious acts of religious intolerance and violent radicalization requires multi-disciplinary and multi-stakeholder efforts, which affect and are affected by the whole of society. This article is about the physical protection of places of worship. When all else fails to foil a terrorist attack, it is the presence of physical protection measures which remain as a last resort to save lives and mitigate consequences.

The term “place of worship” refers to any temple, shrine, site, faith community centre or religious school where worship to any religion is practiced. The basic principles to follow when designing tailor-made protection solutions for a particular place of worship are similar to techniques employed for other public spaces: threat identification and assessment, vulnerability assessment, likelihood evaluation, selection of counter/mitigation measures as well as rehearsal and review of security plans [3]. Nonetheless, places of worship bear particularities, which need to be addressed while analysing and managing the risk of terrorist and extremist attacks. This article looks into these particularities and discusses the aspects that need to be considered when planning the physical protection scheme of places of worship.

Across the world and in Europe, incidents of anti-religious attacks are on the rise. The Easter attacks in Sri Lanka in 2019 demonstrated that Daesh’s brand of radical Islamism remains a threat. Violent right wing extremism targeting religious worshippers is another trend that is gaining momentum around the world with attacks like the ones in Christchurch (New Zealand), Pittsburg (USA) and on European soil in Halle (Germany), Baerum (Norway) and London (United Kingdom).

The EU Agency for Fundamental Rights reports on persisting trends of anti-Muslim and anti-Semitic sentiments and behaviours across Europe [4]. Discrimination and actual or perceived inequality causes social isolation and breeds radicalization. Europol warns that the negative economic and social impact of the COVID-19 pandemic have the potential to further fuel radicalization across the ideological spectrum [5].

The recent attacks on places of worship have been lone-wolf attacks: radicalized individuals planning and executing an attack single-handedly inspired by previous attacks and propaganda stemming from the same ideology. Europol reports that in the past year the online material inciting lone-actor attacks has significantly proliferated [5]. The weaponry used in the last incidents are firearms, bladed weapons and ramming vehicles. The last EU Terrorism Situation and Trend Report [5] observes that terrorists are increasingly resorting to the use of improvised explosive devices, with triacetone triperoxide (TATP) being the most widespread. Below is a non-exhaustive list of recent terrorist attacks on places of worship in Europe, which exemplifies these trends.

Table 1: Examples of recent attacks on places of worship in Europe

The motivations behind attacks on places of worship of the same religion may differ in different parts of Europe. The European Jewish Congress, for example, considers that the threat to synagogues in Eastern Europe is posed mainly by right wing extremism, while in Western Europe it is mostly by Islamist fundamentalism [6]. Threat identification must also be adapted over time taking into consideration changes in the socio-political scene, new technologies and emerging or evolving threats.  Threat levels do not apply equally to each and every place of worship in the same area.

By their nature, places of worship are powerful symbols and are thus a potential target to extremists whose aim is to send a political message, spread radical ideologies or instil fear. Moreover, being places of spirituality and contemplation designed to promote inclusiveness and a feeling of welcoming and openness, places of worship often are not equipped with security measures, which makes them an easy and attractive target.

An assessment of the attractiveness of a place of worship as a possible target to a terrorist attack must include the following considerations: 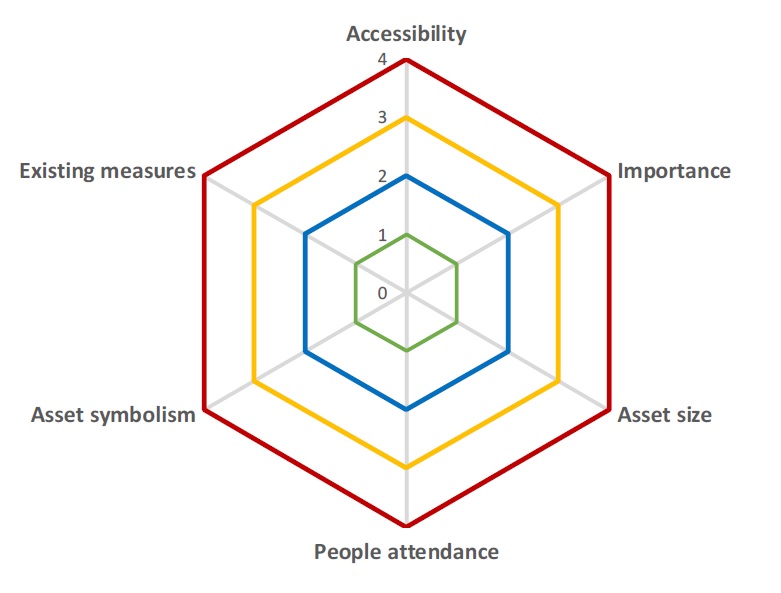 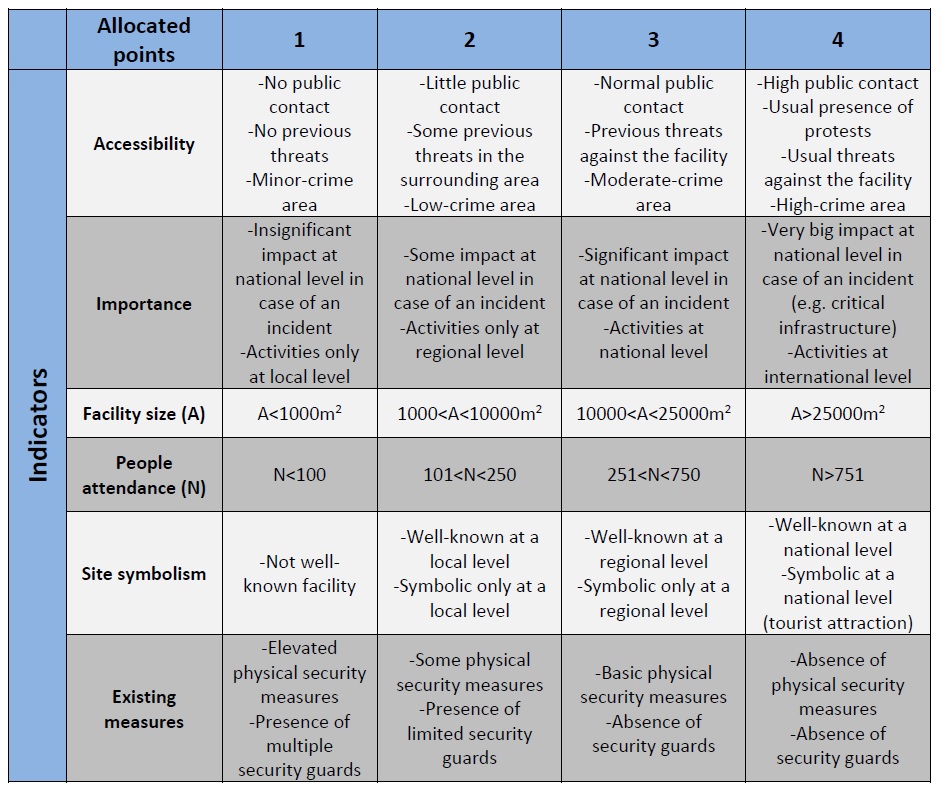 The next component of the risk analysis is the identification of the inherent vulnerabilities of a particular place of worship. Below several considerations are illustrated, which need to be accounted for when performing vulnerability identification/assessment and establishing potential attack scenarios: 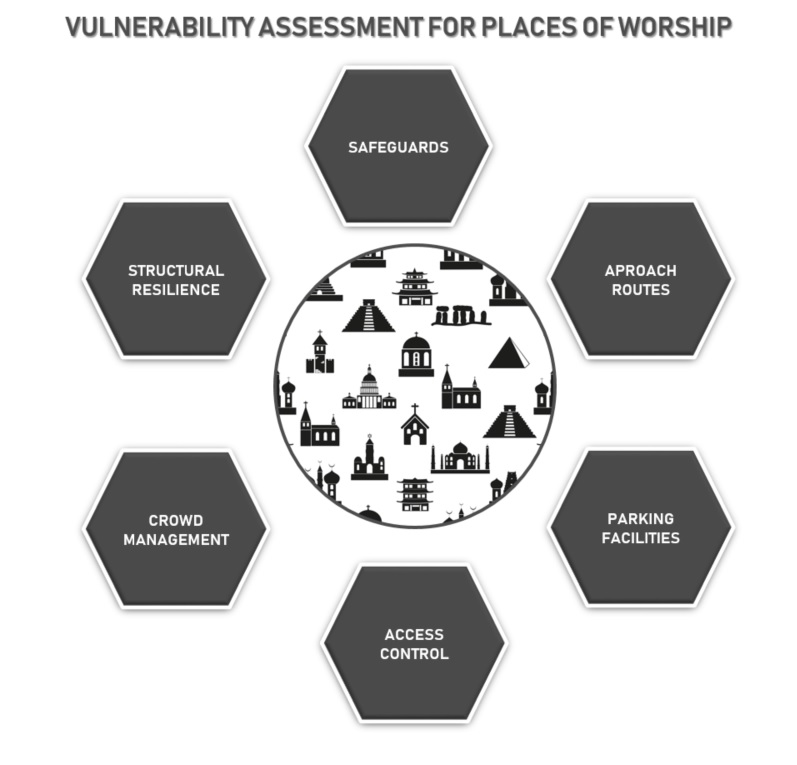 Another important aspect of the risk analysis are the potential consequences of an attack on a place of worship. Loss of human life, physical damage, damage to religious artefacts with high symbolic, cultural and artistic value are the immediate consequences. In the longer term, terrorist attacks on places of worship might cause lasting psychological traumas and disruptions in the functioning of the religious community. Indirect consequences include effects on the economy, such as repair costs and the impact on the tourism industry, as well as socio-psychological effects on the whole of society.

A thorough risk analysis considering various attack scenarios and different threats provides for an informed decision on the risk appetite - the risk we are ready to accept. Because in practice zero risk does not exist. The aim is to select proportionate protective solutions – solutions which do not impinge on the very nature and purpose of the place of worship and which correspond to the level of risk.

Protection measures should ideally be tailor made and well integrated within the design and architecture of the place of worship in order not to interfere with the feeling of contemplation and spirituality it aims to evoke. Often places of worship are considered sites of cultural heritage, so structural interventions or installations of security measures may be subject to approvals by religious or government authorities, which makes the selection a delicate and complicated procedure.  The adopted protection measures and security plans need to be revised and updated over time according to the site-specific threat assessment and risk analysis.

Effective protection measures do not have to be expensive, in-your-face declarations of fear. Often, it is the simple solutions that make the difference. In the attack on the Halle synagogue, for example, the hardened entrance door successfully hindered the attack as the perpetrator could not enter at the building’s interior and the security cameras in combination with the panic button ensured the fast response of the authorities and the interception of the attack [7]. Panic button systems can significantly shorten the time required for alerting law enforcement authorities in the case of an attack. Bollards or other vehicle barriers strategically placed at the external perimeter of the building may successfully intercept vehicle-ramming attacks and enforce an increased standoff distance.

Security measures must be regularly inspected and maintained to ensure their proper functioning and guarantee a performance level that is in line with their initial design. Having a reinforced door installed is good, but having a key handily kept at a known location to be able to lock the door quickly in the case of a perceived attack is even better. The table below provides a non-exhaustive list of relatively simple protection measures, which can be highly effective if installed and maintained properly. 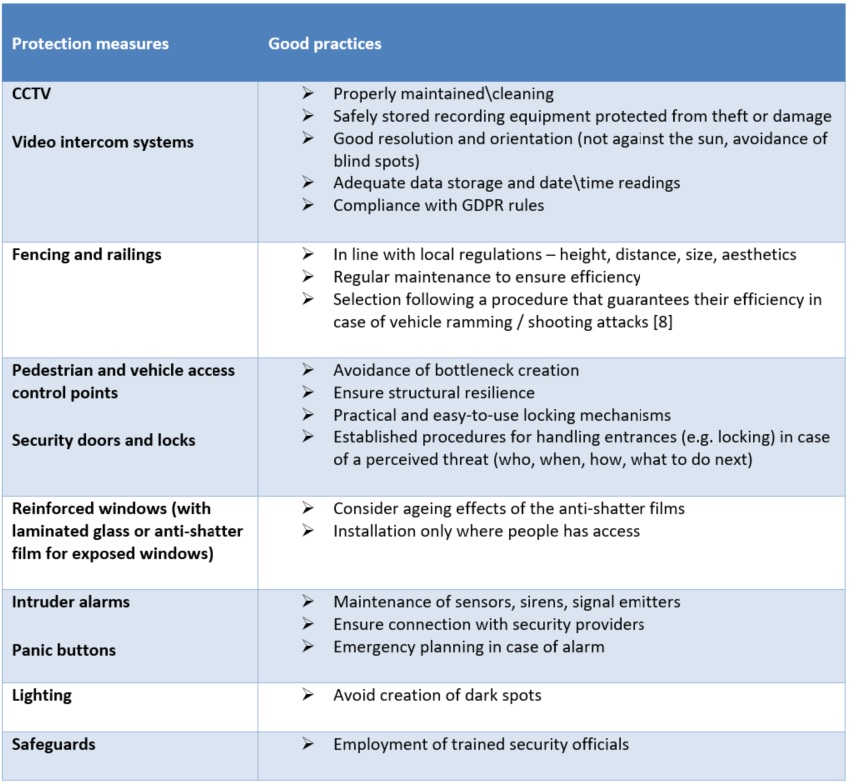 Table 2: Good practices for the installation and maintenance of common protection measures

Of fundamental importance for the security of places of worship is the communication and good relationship between public authorities, law enforcement agencies and religious institutions and faith community leaders. Faith community leaders must be kept informed about the levels and types of threat, while law-enforcement agencies must be notified about special events or whenever there is a need for increased protection.

The United Nations has come up with a plan of action to safeguard religious sites [9], which recommends that places of worship are mentioned as vulnerable places in the national security strategies of member states with established procedures and well-defined roles among actors for early-warning systems, emergency response, crisis management, security, and resilience.

Security plans are to be developed in collaboration among religious leaders and security operators or law enforcement agencies. Training practice on how to react in case of an attack, including evacuation plans, may help for a swifter reaction and save human lives.

Awareness-raising is another imperative factor in the protection of places of worship. Religious communities must be informed on ways to detect threats, report suspicious behaviour, notice signs of potential attacks and know how to respond. Schemes like “See Something, Say Something” or “Run-Hide-Tell” provide the wider community with a straightforward message for a ready response in case of an incident. Infographic material, advertisements and public information campaigns are also effective means to raise awareness. Transmitted messages need to avoid being confusing, ambiguous or contradicting to other ongoing campaigns.

The communication and collaboration among religious communities can provide invaluable exchange of best practices and lessons learned. The Declaration on Human Fraternity for World Peace and Living Together [10] signed by His Holiness Pope Francis and His Eminence the Grand Imam of Al-Azhar in February 2019 or the agreement signed between the Muslim World League and the Appeal of Conscience Foundation [11] in April 2019 pave the way for such initiatives.

Support by the European Commission

The European Commission helps Member States and organisations from different faiths to better protect their places of worship. The Commission has organized meetings with representatives from religious communities and Member States to discuss actions to reduce the space for such attacks and minimise their consequences when they do occur. The European Commission has made 20 Million Euro available to fund projects that will improve the security in places of worship on top of several other projects financed in recent years. The funding is aimed at fostering cooperation across different religious communities and with Member States’ authorities, particularly law enforcement, to share information on security threats, raise awareness and put in place basic protective measures in places of worship across the Union. 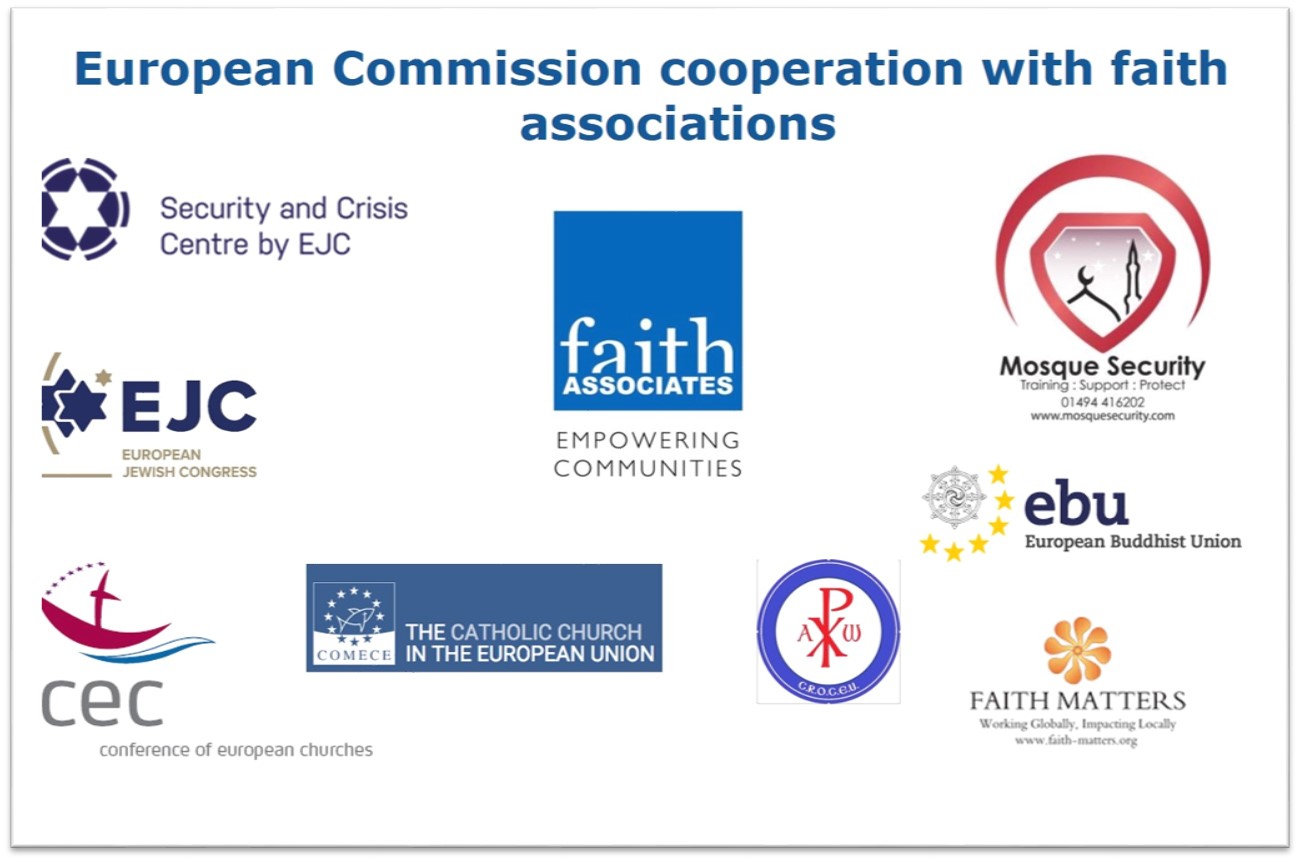 The European Commission is working on a technical guideline for the protection of places of worship from terrorist attacks. Follow this newsletter to receive updates.

In the following issues of this newsletter we will also provide information on projects focusing on the protection of places of worship.

[2] Article 10 (freedom of thought, conscience and religion), Article 21 (non-discrimination) and Article 22 (religious diversity) of the EU Charter of Fundamental Rights, Article 9 of the European Convention on Human Rights

[9] United Nations Alliance of Civilizations (2019): The United Nations Plan of Action to safeguard religious sites: in unity and solidarity for safe and peaceful worship https://www.un.org/sg/sites/www.un.org.sg/files/atoms/files/12-09-2019-UNAOC-PoA-Religious-Sites.pdf