In 2019, nearly half of all overnight stays of international tourists in the EU were in Spain, Italy and France.

In 2019, Spain was the most popular EU destination for international tourists, with 299 million nights spent in tourist accommodation, or 22 % of the EU total.

This article provides information on recent statistics in relation to tourism in the European Union (EU). Tourism plays an important role in the EU because of its economic and employment potential, as well as its social and environmental implications. Tourism statistics are not only used to monitor the EU’s tourism policies but also its regional and sustainable development policies.

Bed places in the EU: Italy and France predominate

It is estimated that there were almost 618 000 tourist accommodation establishments active within the EU in 2019 and that together they provided nearly 28.8 million bed places (see Table 1). More than one third (35.7 %) of all the bed places in the EU were concentrated in just two of the Member States, namely Italy (5.2 million) and France (5.1 million), followed by Spain and Germany (3.6 million bed places each). 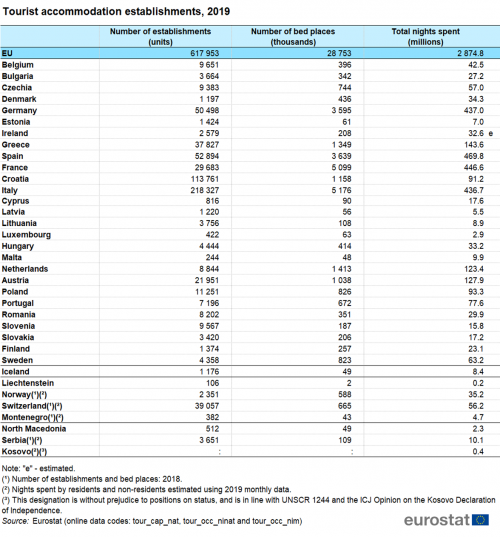 Nights spent by international guests in the EU: Spain on top

Nearly half of the total nights spent by international guests in the EU were spent in Spain, Italy and France 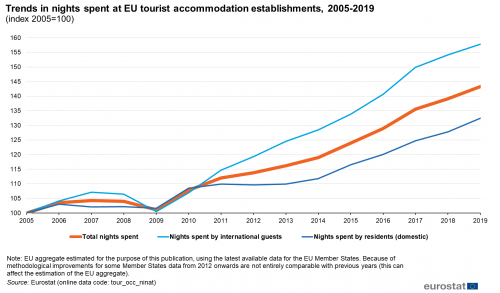 In 2019, Spain was the most common tourism destination in the EU for international tourists (people travelling outside their country), with 299 million nights spent in tourist accommodation establishments, or 22.0 % of the EU total (see Figure 2 and Figure 3). Nearly 7 out of 10 from these 299 million nights spent in Spain were concentrated in three regions: Canarias (Canary Islands), Illes Balears (Balearic Islands) and Cataluña (Catalonia), (see also the article "Tourism statistics at regional level").

The second most popular EU destination for international tourists in 2019 was Italy (221 million nights), followed by France (136 million nights) and Greece (120 million nights). These four countries together accounted for more than half (57.0 %) of the total nights spent by non-residents in the EU. On the other hand, the least common EU destinations in terms of nights spent, were Luxembourg, Latvia, Lithuania and Estonia. 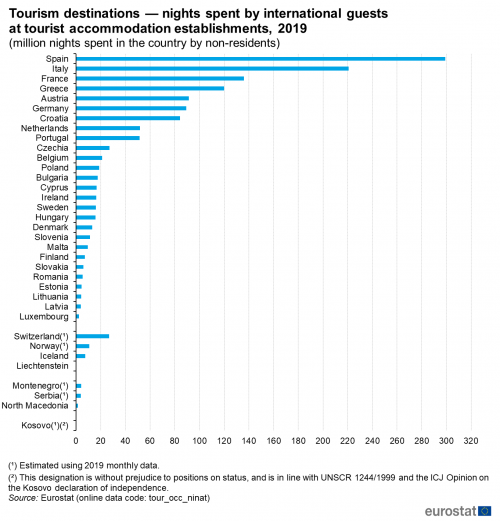 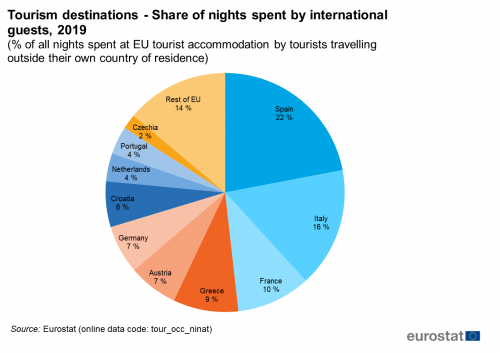 Figure 3: Tourism destinations - Share of nights spent by international guests, 2019
(% of all nights spent at EU tourist accommodation by tourists travelling outside their own country of residence)
Source: Eurostat (tour_occ_ninat) 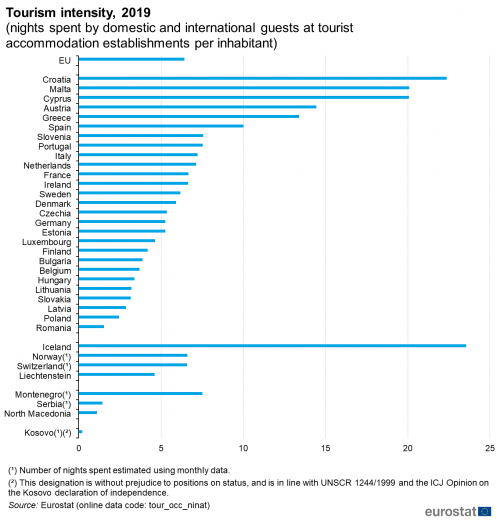 Tourism participation: More than eight out of ten residents of the Netherlands, Sweden, Finland and Luxembourg participated in tourism

It is estimated that 64.7 % of the EU population aged 15 or over took part in tourism for personal purposes in 2019, in other words they made at least one tourist trip for personal purposes during the year. Again, large differences can be observed between the EU Member States, as this participation rate ranged from 28.6 % in Romania to 85.0 % in the Netherlands (see Figure 5). 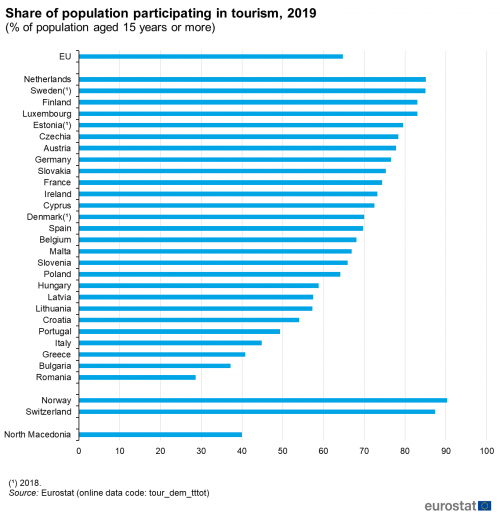 
Residents (aged 15 and above) from within the EU made an estimated 1.1 billion tourism trips in 2019, for personal or business purposes. More than half (56.9 %) of the total number of trips made were short trips of one to three nights (see Table 2), while 72.7 % of all trips made were to domestic destinations, with the remainder abroad. 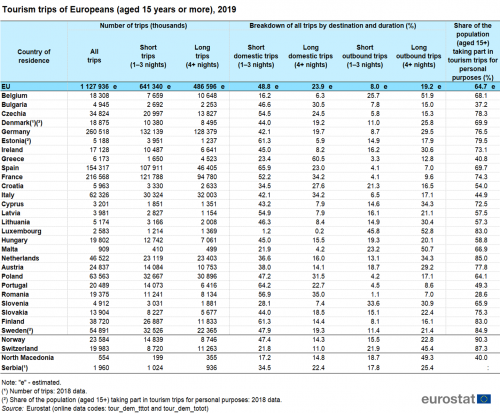 
EU residents showed a preference to travel in the summer months with nearly one in four of their trips made in July or August (see also article "Seasonality in tourism demand"). 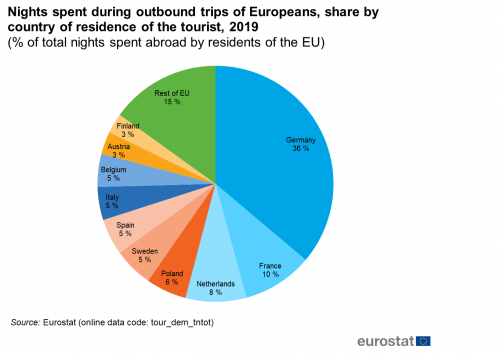 Figure 6: Nights spent during outbound trips of Europeans, share by country of residence of the tourist, 2019
(% of total nights spent abroad by residents of the EU)
Source: Eurostat (tour_dem_tntot)

When taking into account a country’s size in terms of its population, Luxembourg was the EU Member State whose residents spent the most nights abroad per inhabitant (an average of 31 nights in 2019), followed by Cyprus (18 nights) and Sweden (15 nights). At the other end of the spectrum, residents of Romania, Greece and Bulgaria spent, on average, less than two nights abroad in 2019 (see Figure 7). 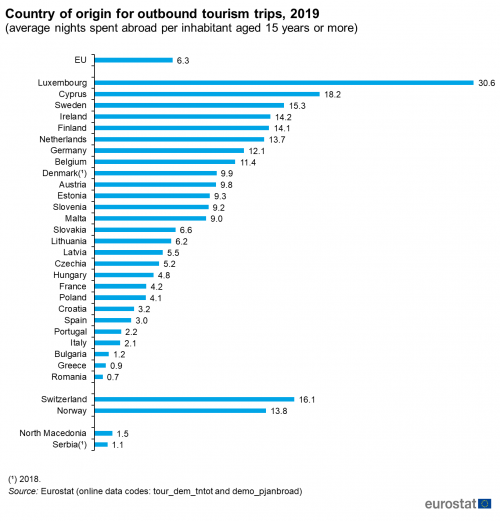 Germans were the biggest EU spenders on international travel, totaling EUR 83.3 billion in 2019

The economic importance of international tourism can be measured by looking at the ratio of international travel receipts relative to GDP; these data are from balance of payments statistics and include business travel, as well as travel for pleasure. In 2019, the ratio of travel receipts to GDP was highest, among the EU Member States, in Croatia (19.4 %), Cyprus (13.0 %) and Malta (12.5 %), confirming the importance of tourism to these countries (see Table 3). In absolute terms, the highest international travel receipts in 2019 were recorded in Spain (EUR 71.2 billion) and France (EUR 57.0 billion), followed by Italy (EUR 44.3 billion) and Germany (EUR 37.2 billion). 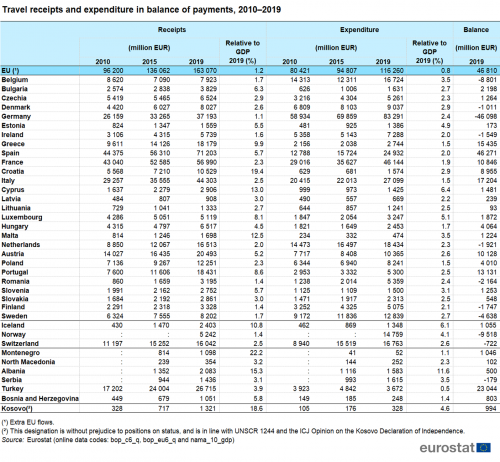 Germany recorded the highest level of expenditure on international travel, totaling EUR 83.3 billion in 2019, followed by France (EUR 46.1 billion), Italy (EUR 27.1 billion) and Spain (EUR 24.9 billion). When analysing this expenditure relative to the population, Luxembourg's residents spent on average EUR 5 289 per inhabitant on travel abroad in 2019, far ahead of the second ranked country, Cyprus (EUR 1 627 per inhabitant), which was followed by Denmark, Ireland and Belgium.

Spain was the EU Member State with the highest level of net receipts from travel in 2019 (EUR 46.3 billion), while Germany recorded the biggest deficit (EUR -46.1 billion).

Tourism, in a statistical context, refers to the activity of visitors taking a trip to a destination outside their usual environment, for less than a year. It can be for any main purpose, including business, leisure or other personal reasons other than to be employed by a resident person, household or enterprise in the place visited.

In July 2011, the European Parliament and the Council of the European Union adopted a new Regulation (EU) No 692/2011 concerning European statistics on tourism and repealing Council Directive 95/57/EC; this came into force for reference year 2012 and requires EU Member States to provide a regular set of comparable tourism statistics.

Tourism statistics in the EU consist of two main components: on the one hand, statistics relating to capacity and occupancy of collective tourist accommodation; on the other, statistics relating to tourism demand. In most EU Member States, the former are collected via surveys filled in by accommodation establishments, while the latter are mainly collected via traveller surveys at border crossings or through household surveys.

Statistics on tourism demand are collected in relation to the number of tourism trips made (and the number of nights spent on those trips), separated by:

The data are also analysed by the socio-demographic characteristics of the tourist:

Up to 2013, tourism statistics were limited to at least one overnight stay; as of reference year 2014, outbound same-day visits are also covered by official European statistics.

Data from a range of other official sources may be used to study tourism. These statistics include:

According to a United Nations World Tourism Organisation (UNWTO) publication titled ‘International Tourism Highlights’, the EU is a major tourist destination, with four of its Member States among the world’s top 10 destinations. Tourism has the potential to contribute towards employment and economic growth, as well as to development in rural, peripheral or less-developed areas. These characteristics drive the demand for reliable and harmonised statistics within this field, as well as within the wider context of regional policy and sustainable development policy areas.

Tourism can play a significant role in the development of European regions. Infrastructure created for tourism purposes contributes to local development, while jobs that are created or maintained can help counteract industrial or rural decline. Sustainable tourism involves the preservation and enhancement of cultural and natural heritage, ranging from the arts to local gastronomy or the preservation of biodiversity.

In 2006, the European Commission adopted a Communication titled ‘A renewed EU tourism policy: towards a stronger partnership for European tourism’ (COM(2006) 134 final). It addressed a range of challenges that will shape tourism in the coming years, including Europe’s ageing population, growing external competition, consumer demand for more specialised tourism, and the need to develop more sustainable and environmentally-friendly tourism practices. It argued that more competitive tourism supply and sustainable destinations would help raise tourist satisfaction and secure Europe’s position as the world’s leading tourist destination. It was followed in October 2007 by another Communication, titled ‘Agenda for a sustainable and competitive European tourism’ (COM(2007) 621 final), which proposed actions in relation to the sustainable management of destinations, the integration of sustainability concerns by businesses, and the awareness of sustainability issues among tourists.

The Lisbon Treaty acknowledged the importance of tourism — outlining a specific competence for the EU in this field and allowing for decisions to be taken by a qualified majority. An article within the Treaty specifies that the EU ‘shall complement the action of the Member States in the tourism sector, in particular by promoting the competitiveness of Union undertakings in that sector’. ‘Europe, the world’s No 1 tourist destination — a new political framework for tourism in Europe’ (COM(2010) 352 final) was adopted by the European Commission in June 2010. This Communication seeks to encourage a coordinated approach for initiatives linked to tourism and defined a new framework for actions to increase the competitiveness of tourism and its capacity for sustainable growth. It proposed a number of European or multinational initiatives — including a consolidation of the socioeconomic knowledge base for tourism — aimed at achieving these objectives.