The mountain typology is a classification based on the following two categories:

The first step for classifying mountain regions concerns the delineation of mountain areas. This was carried out using a digital elevation model (DEM), a 3-D approximation of the surface of a terrain produced from elevation data. The model provides a raster (grid) dataset with information captured every 30 arc-seconds (approximately, every 1 km²).

Within a European context, topographic mountain areas are defined using the following criteria:

The objective of the final criterion (for areas with elevation < 300 m) was to identify mountain areas with relatively large local contrasts in topography, such as Scottish or Norwegian fjords, or Mediterranean coastal mountain areas (for example, in Greece).

Once the delineation of mountain areas has been finalised, it may be used to identify NUTS level 3 regions where more than 50 % of the surface is covered by mountain areas.

Note the mountain typology is not defined/recognised within the NUTS Regulation, although the NUTS level 3 regions themselves are defined therein.

There are links between the degree of urbanisation (see Chapter 2) or the urban-rural typology (see Chapter 5) and the typology for mountain regions, insofar as rural areas and predominantly rural regions overlap, to some degree, with mountain regions. On the other hand, there are three capital regions which are classified as mountain regions: Ljubljana (in Slovenia), Oslo (in Norway) and Bern (in Switzerland).

Map 1 provides an overview of the final classification for the mountain typology showing each of the different classes described above. 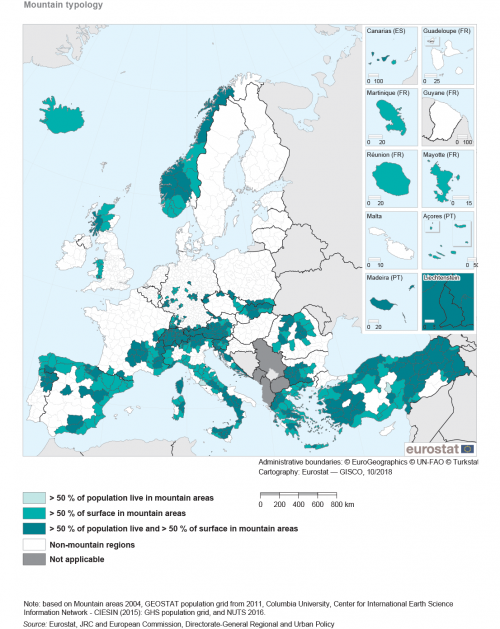 The mountain typology was developed by Nordregio through a project that was financed by the European Commission. Initially, the typology was based on information for local administrative units (LAUs), with mountain units defined as those with more than half of their surface covered by topographic mountain areas.

Thereafter, the most recent definition of mountain regions (as described above) was developed by the Directorate-General for Regional and Urban Policy in association with Eurostat.

The NUTS Regulation specifies that the classification of regions should remain stable for a period of at least three years; the most recent updates were for NUTS 2010, NUTS 2013 and NUTS 2016. After each revision of the NUTS classification, population grid statistics should be re-assessed in order to (re-)compute the share of each NUTS level 3 region living within mountain areas. Changes to the mountain regions classification resulting from a revision of population distributions for 1 km² grid cells are less common and these may be expected every 10 years. The next major update of the population grid is foreseen to take place for the 2021 reference year. At the time of writing there is no change foreseen in relation to the use of information derived from the global digital elevation model, although new technologies may result in more detailed elevation models being made available over time.

At the time of writing, a 2021 population and housing census implementing regulation is in the process of being adopted by the European Commission. It includes an article for 1 km² population grid statistics. As well as information for annual counts of populations, it also foresees more detailed analyses: population by sex, population by age, number of employed persons, population by place of birth, population by usual place of residence one year prior to the census.

Eurostat are also discussing post-2021 census developments with national statistical authorities. It is hoped that the European statistical system (ESS) will agree to produce — from the mid-2020s onwards — annual counts of populations (based on usual place of residence) for a 1 km² grid, with data to be made available within 12 months of the reference period.

Geodata for mountain areas; note, these files can only be read when using geographical information system (GIS) software.

A variety of different statistical surveys collect data for NUTS level 3 regions and this information may be used to calculate data for mountain and non-mountain regions. This process involves aggregating the data for NUTS level 3 regions to compute a total or an average for all mountain (and non-mountain) regions within a territory (for example a Member State, or the EU as a whole).

Eurostat publishes data for the mountain typology through Regions and cities illustrated.

Eurostat’s website provides information for a wide variety of indicators for the mountain typology. These statistics are available for the following statistical domains: demography, population projections, the labour market, crimes recorded by the police, economic accounts, business demography, intellectual property rights and transport. They are available here. 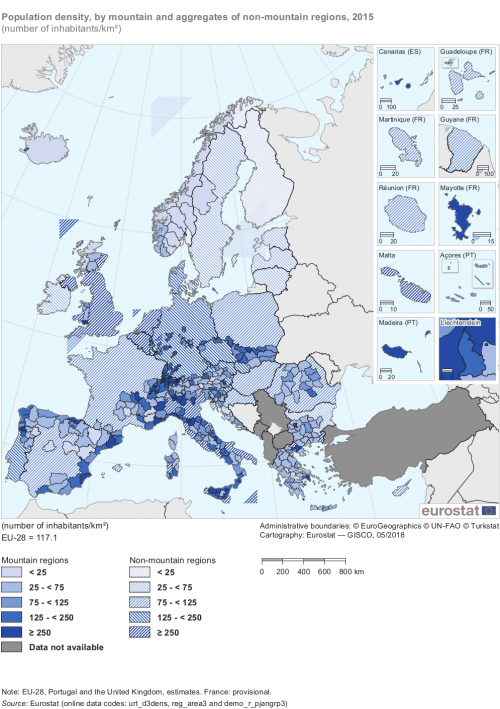