Compared with the average for the EU, regional labour productivity increased markedly between 2010 and 2017 in Dublin, South-East (both Ireland), Wolfsburg, Kreisfreie Stadt, Ingolstadt, Kreisefreie Stadt (both Germany) and Pieriga (Latvia). 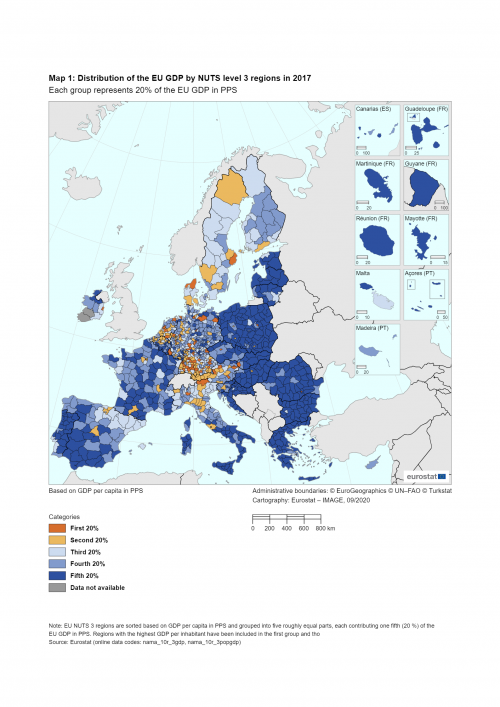 Classification of NUTS level 3 regions based on their GDP per inhabitant in PPS, 2017
Source: Eurostat (nama_10r_3gdp) and (nama_10r_3popgdp)

This article provides an analysis of regional accounts data available for the European Union’s (EU) NUTS level 3 regions. Regional data at level 3 provide more granular (detailed) information than the data at level 2, which are the ones most often presented in Eurostat publications. Based on the 2016 version of NUTS, there are 1 169 level 3 regions in the EU-27 compared with 240 level 2 regions.

The use of level 3 data makes it possible to have a regional analysis for several of the Member States that only have a single level 2 region: there are only two Member States — Cyprus and Luxembourg — that also remain a single region at level 3. Furthermore, level 3 offers a more enlightening regional analysis for Member States with only two or three regions at level 2, namely Ireland, Croatia, Lithuania and Slovenia. For these Member States, a level 2 analysis may well be particularly unbalanced due to the dominance of the region that contains the capital city; note that this can also happen at level 3 for Member States with only two or three regions. Equally, the information available at level 3 is much more detailed than that at level 2 for some of the larger Member States. Most notably, Germany has 401 level 3 regions compared with just 38 level 2 regions.

While a regional analysis is more detailed at level 3 than at level 2, data are available for far fewer national accounts variables. For example, there are no regional accounts data on the compensation of employees, hours worked, investment or household accounts. The information available from regional accounts for level 3 concerns gross domestic product (GDP) and population, as well as a relatively aggregated activity analysis (depending on the Member State, either for 6 or for 10 activities according to NACE) for gross value added and employment.

Statistics on regions — the NUTS classification

At the heart of regional statistics is the NUTS classification — a classification of territorial units for statistics. This regional classification for EU Member States is based on a hierarchy of regions and subdivides each Member State into regions that are classified according to three different levels, covering levels 1, 2 and 3 from larger to smaller areas. Some EU Member States have a relatively small population and may therefore not be subdivided at some (or even all) of the different levels of the NUTS classification. For example, Estonia, Cyprus, Latvia, Luxembourg and Malta are each composed of a single level 2 region according to the 2016 version of the classification. For non-member countries covered in this article — the United Kingdom, EFTA countries and some candidate countries — the concept of ‘statistical regions’ is used instead of NUTS. This applies principles analogous to those used in the establishment of NUTS, but is based on gentlemen’s agreements between the countries concerned and Eurostat (rather than having any legislative basis). Table 1 provides an overview of the number of NUTS and statistical regions in each Member States as well as the above mentioned non-member countries. 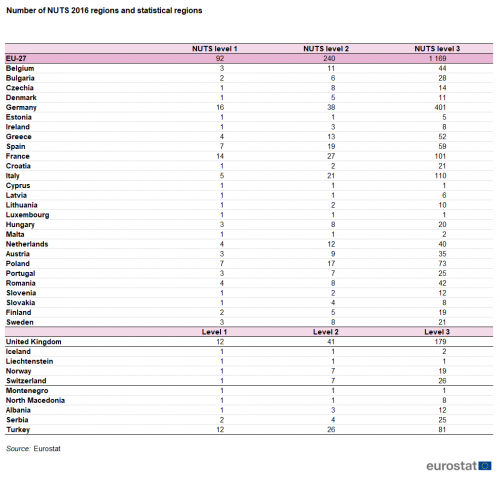 Regional concentration of economic activity within the EU

Map 1 shows the regional concentration of economic activity within the EU. For each region, the GDP per inhabitant (also referred to as GDP per capita) has been calculated based on GDP data presented in purchasing power standards (PPS).

GDP expressed in PPS is calculated by applying purchasing power parities, the latter being indicators of price level differences between countries. The use of purchasing power parities rather than market exchange rates to convert currencies makes it possible to compare the output of economies and the material welfare of their inhabitants in real terms, in other words controlling for differences in price levels. By convention, for the EU as a whole, GDP in PPS has the same value as GDP in euro; these values (in PPS and euro) are different for individual EU Member States and regions, depending on the underlying price level differences.

Presenting the data as a ratio to the number of inhabitants in each region standardises the data to take account of the different size (in population terms) of each region.

The 1 167 regions for which data are available have been sorted based on the value of their GDP per inhabitant. They have then been grouped into five roughly equal parts, each accounting for approximately PPS 2.6 trillion (thousand billion) of GDP in 2017, in other words one fifth (20 %) of the EU-27’s total GDP. Just 86 level 3 regions made up the first fifth of the EU economy in 2017. These include 63 German regions (which together contributed 38 % of the total GDP for this first group), five Austrian regions, four Dutch regions, two regions each from Denmark, France and Italy, and one region each from Belgium, Czechia, Ireland, Luxembourg, Poland, Romania, Slovakia and Sweden. These 86 regions cover an area of approximately 52 000 square kilometres, representing 1.2 % of the total area of the EU. The other groups (second to fifth) are composed of 133, 208, 317 and 423 level 3 regions respectively.

Map 1: Classification of NUTS level 3 regions based on their GDP per inhabitant in PPS, 2017
Source: Eurostat (nama_10r_3gdp) and (nama_10r_3popgdp)

Secondly, the use of national PPS (as regional ones are not available) overstates the GDP per inhabitant in PPS in relatively expensive regions within any given Member State, while the values for relatively cheaper regions within a Member State are understated. The French regions of Paris and Mayotte are good examples. Applying the national PPS underestimates the price level in Paris and overestimates the price level in Mayotte. There are no official estimates of regional variations in price levels across the EU. However, estimates based on detailed data for consumer prices in Germany indicate that the regional variation may be as high as 26 %, between level 3 regions, in particular, due to housing costs [1].

Bearing these issues in mind, Table 2 shows what percentage of the GDP of each EU Member State belonged to each of the five groups (based on the value of GDP per inhabitant in each region) for the year 2017. Looking at the bottom 20 % group, it includes regions that represent around 60 % of the national economy in Bulgaria, Greece, Croatia, Hungary, Poland, Romania and Slovakia and around 20 % of the national economy in Spain, France (2016 data) and Italy. The impact of commuting is clearly visible in the capital regions of Czechia, Slovakia and Poland, which are part of the top 20 % group while the rest of the regions of those countries are included in the two bottom groups. 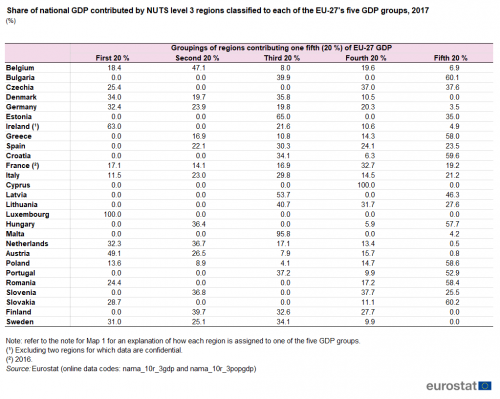 Another interesting aspect of the concentration of regional economic activity is to analyse the developments observed over a number of years. Map 2 classifies the level 3 regions for which data are available according to two different criteria: whether their share of EU-27 GDP decreased or increased between 2010 and 2017 and whether their share of national GDP decreased or increased during the same period. By definition, non-member countries do not have any share of EU-27 GDP, and so the values shown for regions in these countries reflect the change in the ratio of their GDP to the EU-27’s GDP. 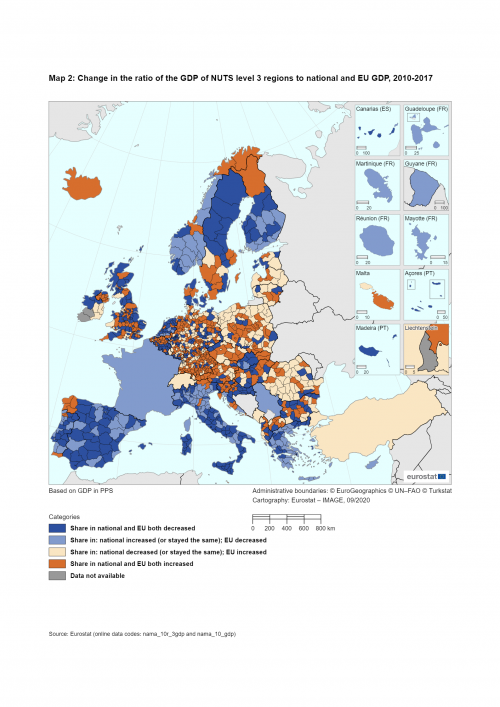 Looking at the share in national GDP (rather than in the EU-27 total), 20 out of 28 Bulgarian regions saw their share of national GDP decrease, as was the case for four of the five Estonian regions, 42 of the 60 Spanish regions, 8 of the 10 Lithuanian regions, five of the seven Latvian regions and 33 of the 43 Romanian regions. In most cases, the decreases in the shares were explained by an increase in the more developed regions of those Member States.

Regarding the level 3 regions that were in the top 20 % of the EU economy (as shown in Map 1), increases in the share of national GDP were observed for several regions, including many capital city regions and other relatively wealthy urban areas, such as Groot-Amsterdam (the Netherlands), Bucureşti (Romania), Stockholms län (Sweden), Byen København (Denmark), Miasto Warszawa (Poland), München, Kreisfreie Stadt (Germany), Milano (Italy) and Bratislavský kraj (Slovakia). However, there were exceptions; some capital city regions were in the top 20 % of the EU economy but experienced decreases in their share of national GDP, as was the case for example in Hlavní město Praha (Czechia), Arr. de Bruxelles-Capitale/Arr. van Brussel-Hoofdstad (Belgium), Wien (Austria) and Dublin (Ireland). 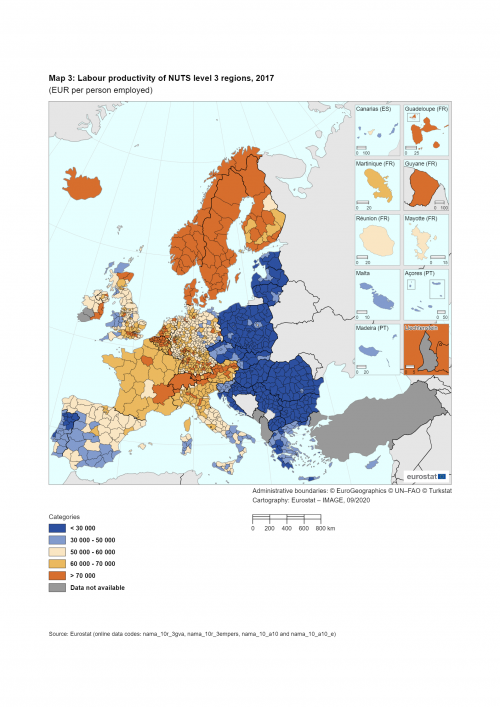 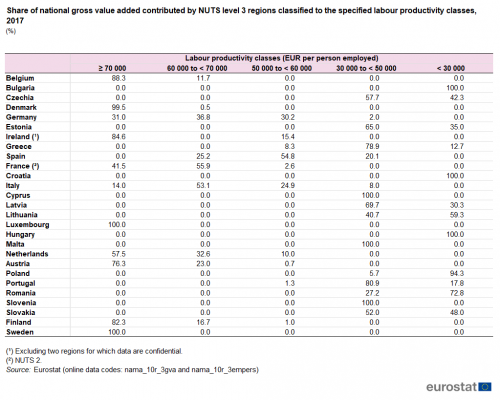 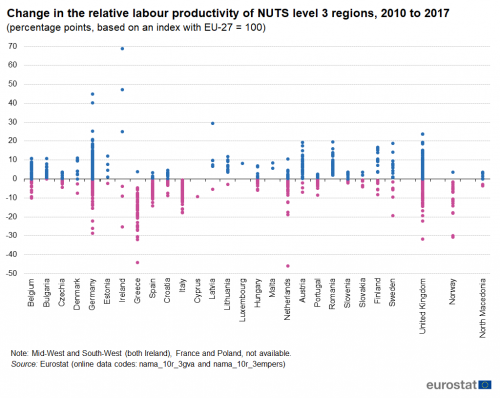 The final section of this article looks at regional specialisation of level 3 regions. For this purpose the Krugman specialisation index is used. The index measures the extent to which the structure of a region’s output (based in this case on value added) differs from the average for the EU-27. If the index is close to zero, it implies that the economic structure of the region is very similar to that of the EU-27. The structure has been analysed based on six economic activities which collectively cover the whole economy and for which data are available for all level 3 regions.

There are 214 level 3 regions in the EU for which the Krugman index was above 0.40. These relatively high levels can, at least in part, be explained by a high degree of specialisation in industry, agriculture, finance, tourism-related activities or government. An index above 0.40 was observed for a relatively high proportion of regions in Czechia (9 out of 14), Lithuania (6 out of 10), Hungary (12 out of 21) and Bulgaria (12 out of 28) regions. 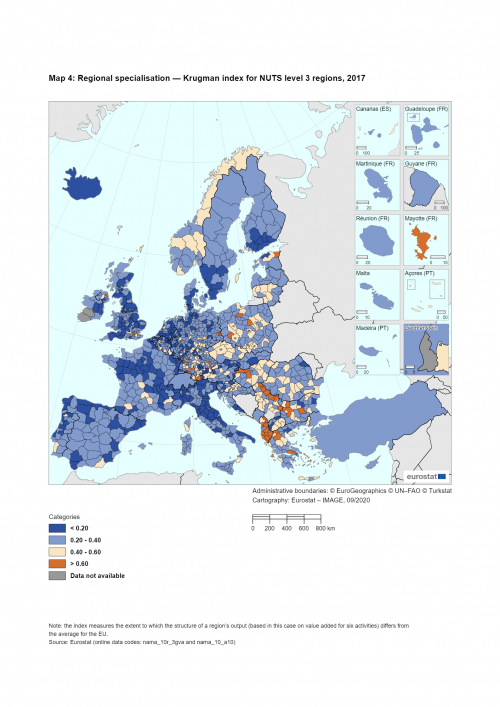 In her political guidelines for the European Commission for 2019-2024, President van der Leyen highlighted a desire to strive for a European economy that works for people, based on social fairness and prosperity. To do so she called, among other actions, for a deepening of economic and monetary union, greater support for small and medium-sized enterprises (SMEs), the full implementation of the European pillar of social rights, and fairer taxation.