Railway safety statistics in the EU

(Redirected from Rail accident fatalities in the EU)

In 2020, more than half of fatalities from railway accidents in the EU involved unauthorised persons on the tracks (60%) and almost one third occurred at level crossings (31%). 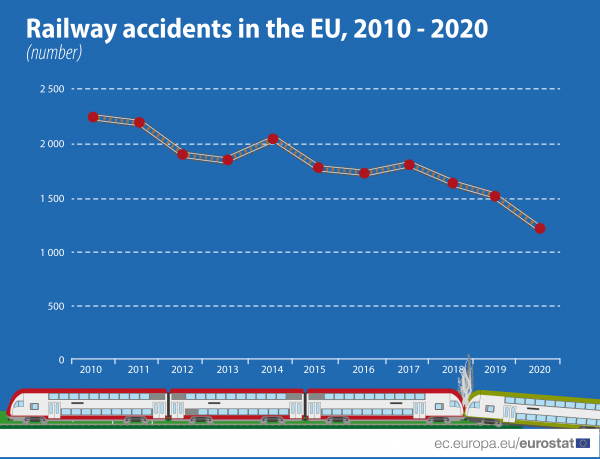 In 2020, 1 331 significant railway accidents were reported in the EU. A total of 687 persons were killed in these accidents, while another 468 persons were seriously injured. At EU level, the number of fatalities in railway accidents decreased gradually over the last decade, from 1 245 in 2010 to 687 in 2020, a fall by 45 %. However, it should be noted that from 2019 to 2020, the decreases in railway accidents, fatalities and seriously injured persons coincided with a sharp drop in passenger transport by rail caused by the Covid-19 pandemic. The large increase in remote working and home schooling, combined with recommendations to avoid unnecessary travel during the pandemic, contributed to a rail passenger transport almost halving in the EU – see the article on railway passenger transport statistics for more details.

Suicides occurring on railways are reported separately. With 2 204 reported cases in 2020, suicides outnumber the victims accounted for by railway accidents.

Eurostat publishes data collected by the European Union Agency for Railways (ERA) in Eurobase. This information is also published by ERA. It should be noted that there are no railways in the EU Member States Cyprus and Malta, nor in the EEA/EFTA country Iceland.

Continued fall in the number of railway accidents

Accident figures for EU countries are comparable from 2010 onwards, following the implementation of common definitions across all Member States. Prior to 2010, Belgium, Poland and Slovakia generally reported all railway accidents instead of only significant accidents. As a result, there was a lower number of accidents in several categories from 2010 onwards compared with previous years. 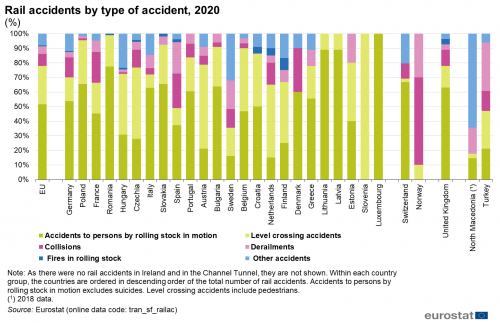 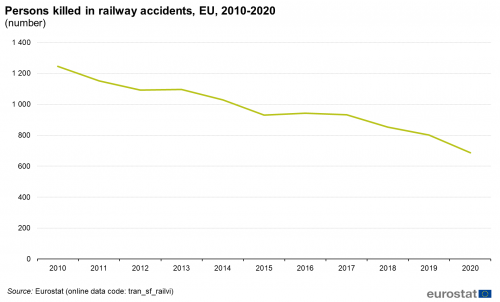 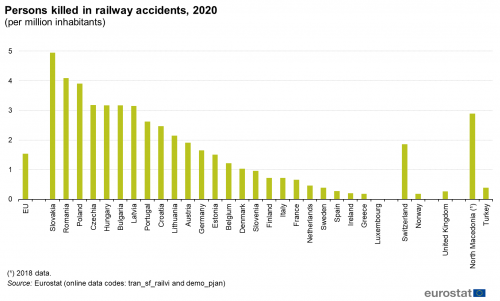 The overall trend in the data shows that travelling by railway is safe, with few fatalities among rail passengers. Based on the most recent data, ERA has estimated that the fatality risk for passengers travelling on trains is 0.033 fatalities per billion passenger-kilometres at EU level, or correspondingly one fatality each 30 billion passenger-kilometres. [1] However, it should be noted that there are substantial differences between Member States.

Most fatalities were persons unauthorised on tracks and railway premises 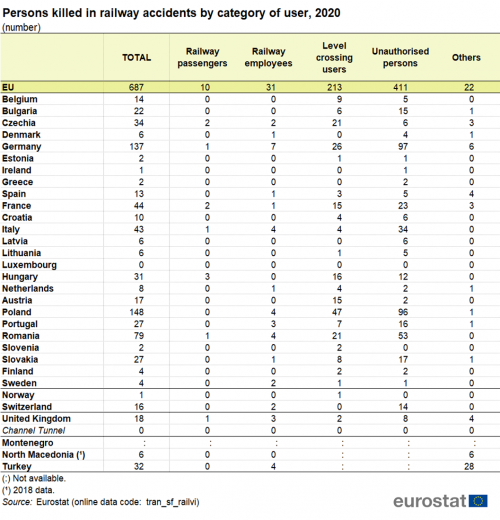 Table 2 outlines the fatalities from railway accidents according to the type of accident. In 2020, close to two thirds (66 %) of these fatalities in the EU were caused by “Accidents to persons by rolling stock in motion”, typically involving persons that are unauthorised on the railway tracks and are hit by a running train. Together with level-crossing accidents, which caused 31 % of fatalities, these accidents were responsible for over 97 % of all deaths occurring in railway accidents in the EU. 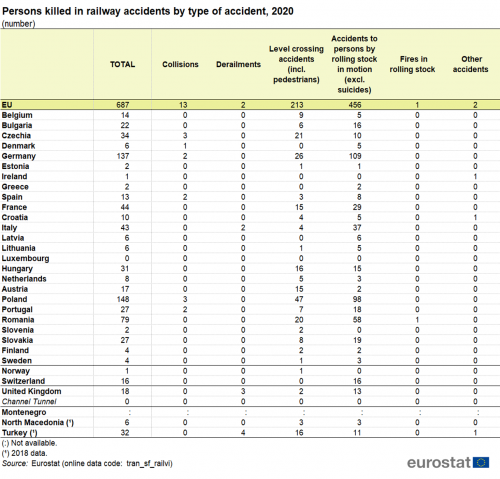 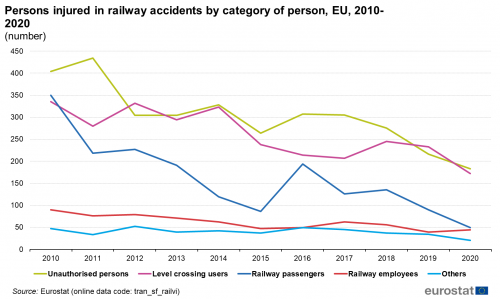 Focusing on the year 2020, Table 3 illustrates the correlation between the various accident categories and the number of persons injured in the different types of accidents. More than half of the seriously injured persons were registered in accidents involving rolling stock in motion (251 injured persons, or 54 % of the total), followed by level crossing accidents (179 persons, or 38 %). 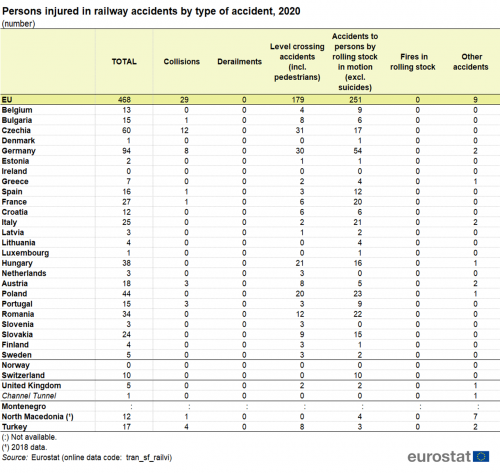 Suicides occurring on railways are reported separately from persons killed or injured in railway accidents. For the EU as a whole, the number of such suicides remained at between 2 200 and 2 800 per year in the period 2010-2020. The highest number was recorded in 2012 with 2 734 suicides on railway premises. In the following years, the numbers fluctuated, changing by between -7 % and +6 % year-on-year. The numbers of suicides on railway premises have fallen consistently since 2017.

In 2020, 2 204 suicides were reported, 109 fewer (-5 %) than in the previous year. The number of suicides on railway premises is significant in most of the Member States. With 678 recorded suicides in 2020, Germany alone accounted for almost one third (31 %) of the EU total. There were also significant numbers of such suicides in Czechia (204 recorded cases), France (203) and the Netherlands (198). 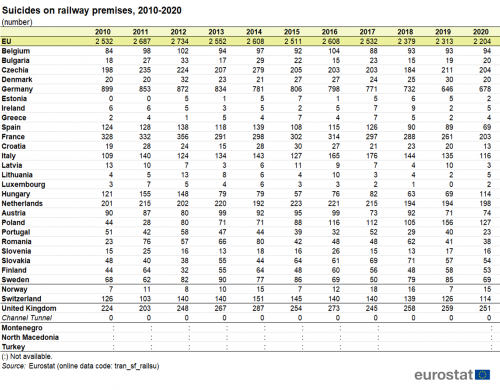 The sources used for the statistics in this publication are data reported to the European Union Agency for Railways (ERA). Railway safety data have been collected by ERA since 2006 through the Common Safety Indicators (CSIs). These were introduced by Annex I to the Railway Safety Directive (Directive 2004/49/EC). Member States have a legal obligation to submit their CSI data to the ERA. ERA publishes an overview of safety-related CSIs as soon as data have been consolidated. The CSIs data are reported via and available through the ERAIL system. The full set of CSI data is made available in the annually published Railway Safety Performance Report. Accident figures are reliable from 2010 onwards, following the strict application of standard definitions. In the past, Belgium, Poland and Slovakia typically reported all railway accidents instead of significant accidents only. This meant a lower count in several categories of accidents since 2010.

Eurostat has signed an agreement with ERA to disseminate these railway safety data through Eurobase. The data disseminated by Eurostat constitute a subset of the data available at ERA.

The railway accident data collected by ERA data are located in the “Multimodal data (tran)” section under “Transport safety (tran_sf)” in Eurobase. Historic data based on Annex H can be found in the section “Railway transport - Historical data (2004-2015) (rail_ac_h)”.

Some differences may occasionally exist between these data, as ERA handles its own compilation procedures and quality checks. Also, whereas data reported to ERA are provided by the national safety authorities, data reported to Eurostat under the framework of Regulation (EC) No 91/2003 were reported by the national statistical institutes. The NSIs might have depended on data from the same national safety authorities, but not necessarily.

It should be noted that the EU Member States Cyprus and Malta have no railways.

Regarding the data for EFTA countries, Iceland has no railways, while Liechtenstein's railways are included in the Austrian data as they are operated by the ÖBB.

Data for Montenegro, North Macedonia and Turkey are extracted from Annex H to Regulation (EC) No 91/2003.

Some data for the most recent reference year may remain provisional for some time. This is linked to ongoing investigations and hence decisions whether to include or exclude certain accidents and or their categorisation.

National rail networks have different technical specifications for infrastructure – gauge widths, electrification standards and safety and signalling systems – which make it more difficult and costly to run a train from one country to another. EU policies exist to overcome such differences. Creating an integrated European railway area thus requires better technical compatibility – 'interoperability' – of infrastructure, rolling stock, signalling and other subsystems of the rail system. Procedures for authorising the use of rolling stock across the EU's rail network also need to be simplified.

The European Union Agency for Railways (ERA) helps promoting interoperability and develop uniform technical standards, a process in which cooperation between EU countries and rail stakeholders is essential.

ERA, based in Lille/Valenciennes (France), is helping to build an integrated European railway area by improving rail safety and interoperability. Set up in 2006, it develops shared technical specifications and approaches to safety, working closely with stakeholders from the rail sector and national authorities, the EU institutions and other interested parties. Featuring a dedicated safety unit, the Agency also monitors and reports on rail safety in the EU.

Directive 2004/49/EC has been repealed and replaced by: