This article presents key messages from selected European Union (EU) annual national accounts figures, together with some practical and methodological background information. National accounts are a powerful source of information for studying many aspects of the economy. The main aggregates, covering the annual and quarterly gross domestic product (GDP) and its components, are among the most significant indicators of the state of any economy, be it at a national or European level. Data on the evolution of GDP, production, expenditure and income as well as related indicators (e.g. on employment and productivity) are often headline figures and are of key interest to users.

While typical users of quarterly national accounts (QNA) figures, such as market analysts, forecasters or economic and monetary policy advisors are primarily interested in assessing the state of the current business cycle, users of annual national accounts data (ANA) are typically interested in analysing structural changes in the economy from a medium-term perspective.

The EU economic data are the result of aggregating the data for the individual economies of 27 Member States. They are fairly heterogeneous in terms of size, income levels, economic structure and recent economic performance.

Table 1 provides an overview of the relative size of their economies between 2001 and 2011 based on GDP measured at current prices and current exchange rates. Member States are sorted in descending order according to their share in EU-27 GDP in 2011. They have been classified into three groups. A first group of five large Member States accounted for more than 70 % of the EU-27 economy in 2011 (71 %). A second group of 12 medium-sized Member States accumulated about one quarter (26 %) of EU GDP. Lastly, a group of 10 small Member States represented just 3% of the EU economy. 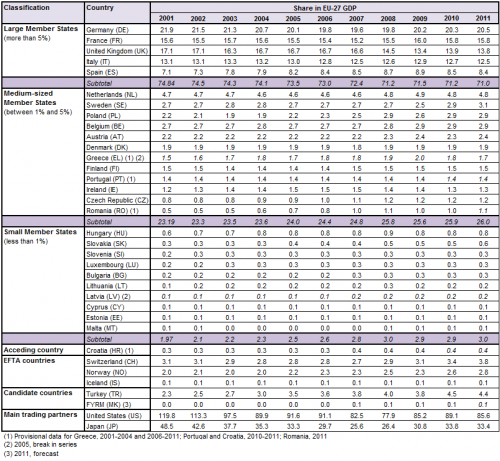 The table provides some interesting facts. For example, the Member State with the largest economy (Germany) is more or less the same size as the combined economies of the twenty smaller Member States. It therefore follows that the main features of the EU economy chiefly result from developments in the largest Member States. This is the case even if their respective share of EU GDP has decreased since 2001 excepted in France and Spain. All medium-sized and small Member States have maintained, and in most cases increased their relative weights since 2001, however four countries (Greece, Ireland, Hungary and Lithuania) faced a slight decrease since 2008. Member States that joined the EU after 2004 benefited from economic growth above the EU average until the economic and financial crisis in 2008.

These figures not only reflect changes in Member States' respective growth but also differences in price levels among countries du to exchange rate fluctuations as the currencies of many EU Member States lost ground against the euro between 2007 and 2009.

The influence of exchange rate effects and differing population sizes on the comparability of nominal GDP levels across countries over time underlines the importance of GDP per capita expressed in purchasing power standards (PPS) for comparing relative income levels.

Figure 1 shows adjusted GDP figures per inhabitant, indexed to EU-27=100 for the years 2006, 2010 and 2011. Based on the figures of 2011, Luxembourg stands with an index of 271.7 while the Netherlands, Ireland, Austria and Sweden had an index of 25 % above the EU average. On the other side eight countries – Slovakia, Estonia, Lithuania, Hungary, Poland, Latvia, Romania and Bulgaria were more than 25 % below the EU-27 average. Although comparisons through time should be taken with caution as many factors affect the way PPS figures change, the comparison with 2005 figures suggests some convergence in GDP per capita as countries that were relatively poorer grew faster than in the relatively richer countries.

Though GDP in PPS is a standard measure for comparing income levels across countries, it is not always the most appropriate indicator. Indeed, GDP is based on the concept of domestic production and as such does not account for net primary income transfers with the rest of the world. This is the case of Luxembourg where a significant part of the wages and salaries paid in relation to domestic production go to cross-border commuters. In Ireland the difference was due to the major presence of foreign multinational corporations. Their profits were included in Irelands GDP, but the dividends repatriated by the multinationals were not reflected in gross national income (GNI).

The next sections analyse further the main components of EU GDP in order to highlight the sources of EU growth and its main features but also the origin of disparities that exist among member States.

Figure 2 gives an overview of GDP in volume growth for the EU, the euro area, US and Japan for the period 2001-2011. EU-27 and the euro area GDP presented a similar trend. Following a period of relative strong growth between 2001 and 2007, the financial and economic crisis let to a sharp worsening of the global economic situation. In 2008 GDP growth rates declined and even turned negative in 2009 reaching -4.3 % and 4.4% in both the EU and the euro area. However the economy showed a significant recovery the following years with a rate of 1.5 % in the EU and of 1.4 % in the euro area in 2011.

GDP volume growth in selected non-EU countries has generally recovered in 2011 compared to the negative growth rates experienced in 2009. However, the growth rates (excepted in the case of Turkey) did not reach the level before 2008 and remained even negative for Japan (-0,8 %). The GDP volume change gives a rough indication of the short-term evolution of living standards. However over longer periods the increase in volume GDP does not necessarily translate into an improvement in living standards: changes in population should be taken into consideration. For short-term economic analysis (quarter-on-quarter or year-on-year developments), population changes are relatively small and therefore the GDP volume change in GDP is a very good approximation of the increase in living standards.

The sources of growth

In Figure 5, GDP in volume per person growth is further broken down into the contributions to the growth of labour productivity per person employed and the growth of persons employed divided by the population for the period 2001–2011. Overall, it can be seen that more than two thirds of EU-27 and euro area (EA-17) growth stemmed from higher labour productivity. The most impressive gains in productivity were displayed by Romania (+5.4 %), Latvia (+4.5 %) and Lithuania (+4.1 %). It is interesting to note that the countries experiencing the highest gains in labour productivity were the eastern European new Member States. The only EU countries that faced negative labour productivity growth were Luxembourg (-0.2 %) and Italy (-0.3%). The EU candidate countries have also experienced significant productivity gains. On the other hand, the highest increase in employment ratios was observed for Luxembourg (+2.9 %), Cyprus (+2 %) and Malta (+1.4 %). The respective EU-27 and EA-17 average growth rates were both 0.5 % per year. Four countries showed a negative employment ratio namely Latvia, Portugal, Hungry and Romania while outside the EU it was the case of Japan.

Following analysis of the overall GDP aggregate, the remainder of this investigation focuses specifically on the structure of, and changes, in, main output, expenditure and income aggregates.

A core selection of national accounts data focuses on developments at the aggregate level of the total economy. For instance, GDP is a central measure of the economic performance of a country (or region). It can be calculated using three approaches: the output approach, which sums the gross value added of various industries, plus taxes and minus subsidies on products; the expenditure approach, which sums the final use of goods and services (final consumption and gross capital formation), plus exports and minus imports of goods and services (external balance); and the income approach, which sums compensation of employees, net taxes on production and imports, gross operating surplus and mixed income. Figure 6 presents the respective size of these aggregates for the EU. 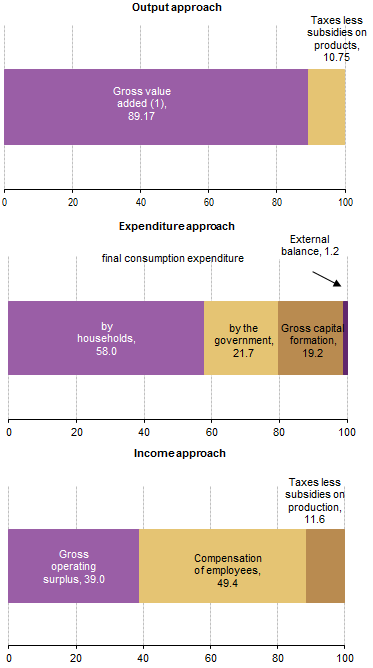 Starting from the production side, Figure 7 presents the breakdowns of EU-27 gross value added by 10 industries according to the revised classification NACE Rev.2. 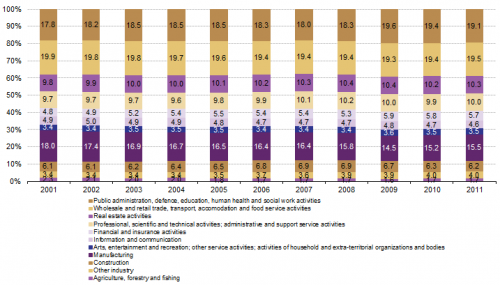 Manufacturing generated 15.5% of the total gross value added, construction 6,2 %, other industries and agriculture, hunting, forestry and fishing accounted for respectively 4 % and 1.7 % of the total GVA.

Looking at the evolution of GVA on a longer term perspective, one can see that the weights of industries slightly decreased while the service sector expanded between 2001 and 2011. Manufacturing showed the highest loss of weight among industries as it accounted for 18 % of GDP in 2001 and only to 15.5 % in 2011. Agriculture, forestry and fishing remained on a steady downward trend around 2 %. On the other side, three main items drove the service sector expansion. Financial and insurance activities gained 0.9% and real estate activities 0.5% share of GDP throughout the period while public administration, defence, education, human health and social work activities accounted for almost 20 % of EU GDP in 2011 compared to 17.8% in 2001.

Figure 8 shows on the basis of 2011 figures that the structure of GVA vary significantly across member states . The countries presenting the highest share in industries were Romania (48.4 %), Slovakia (39.5 %) and the Czech Republic (39.1 %). The share of manufacturing was highest in Slovakia, Ireland, the Czech Republic and Hungary (above 22 %). Construction activities exceeded 10% in Spain and Romania while agricultural GVA was highest in Romania, Bulgaria and Latvia where it was above 5 %. On the other hand the services based economies appeared to be Luxembourg, Greece, Cyprus and Malta with shares of GVA around 80 %. Public administration activities were the highest in Denmark and Sweden. Lithuania, Latvia, Poland and Greece had the largest share in wholesale and retail trade above 25%. Italy, France and Greece presented a substantive high share in real estate where they accounted for more than 13 %. Malta showed a significantly higher share (above 11 % of GVA) in other services compared to the other Member States. 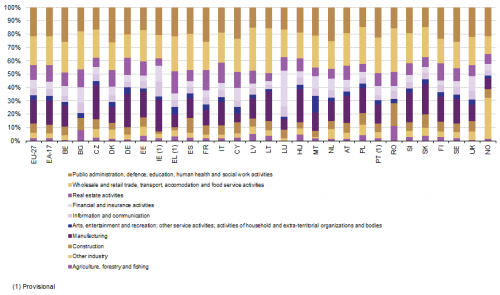 Figure 9 shows the respective EU-27 shares of GDP of each expenditure component for the period 2001-2011. Private final consumption was by far the most important component representing around 58 % of EU GDP throughout the period. Government final consumption and gross capital formation accounted respectively for 21.7 % and 19.2 % of GDP in 2011. While the weight of government final consumption showed on overall an upward trend since 2001, the weight of gross capital formation was more versatile during this period. It increased between 2003 and 2007, reaching its highest level in 2007 with 22.1 % and decreased to 18.3 % of GDP in 2009, its lowest level of the decade. Even if the share of the external balance of goods and services does not represent a large part of GDP (1.2 %), it is worthwhile to note that exports and imports accounted respectively for 43.7 % and 42.5 % of GDP in 2011. 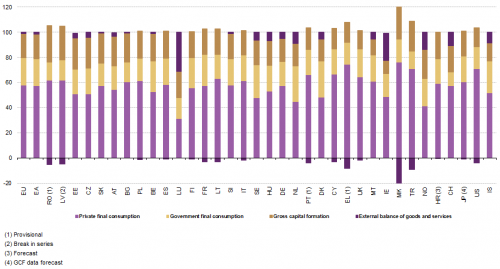 Luxembourg and Ireland showed a particularly strong external balance of goods and services that can be explained by their specific particularities in terms of large cross-border-income, goods and services flows. For instance, in Luxembourg, the significant purchases of fuel, cigarettes and alcohol by non-residents is counted as exports of services. On the other hand Romania and Greece presented a significant negative external balance of respectively -5.2 % and -8.1 % of GDP.

Figure 11 shows the relative share of EU-27 GDP for each component of the income side. Compensation of employees presents a relatively constant share around 50 % of GDP for the period 2001-2011, with a downward trend of 2 percentage points between 2001 and 2007. This is mostly explained by the wages and salaries, as the weight of employer’s social contributions did not change that much throughout that period.

The share of gross operating surplus and mixed income grew until 2007 but this effect reversed in 2008 and 2009 due to the financial and economic crisis. It finally stabilised around 39% of GDP in 2011. The taxes on production and imports less subsidies component showed a similar trend with a share of GDP of 11,8 % in 2011.