The United Kingdom was the EU's largest partner for imports of recyclable paper, plastic and glass in 2021.

The EU exports more recyclable products than they import.

The EU exports more recyclable products than they import 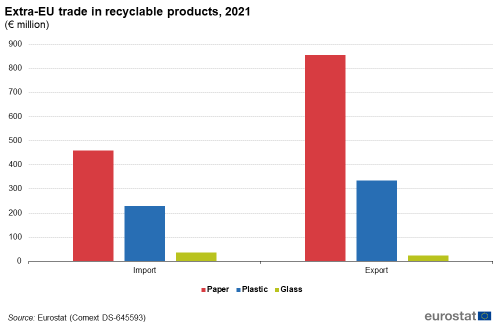 In terms of value, imports of recyclable paper into the EU in 2021 were 31 % higher than they were in 2010 (see Figure 2). Much larger increases occurred in recyclable plastic and glass, for which the value of imports increased by 231 % and 126 % respectively.

In terms of weight, imports of recyclable paper in 2021 were 1 % higher than in 2010. Much larger increases occurred in recyclable plastic and glass, for which the value of imports increased by 52 % and 85 % respectively (see Figure 3).

Exports of two of these three groups of recyclable products from the EU were lower, in value terms, in 2021 than they had been in 2010 (see Figure 4). The sharpest decrease was for recyclable plastic (down 56 %) and then paper (down 13 %), while glass exports increased by 27 %. 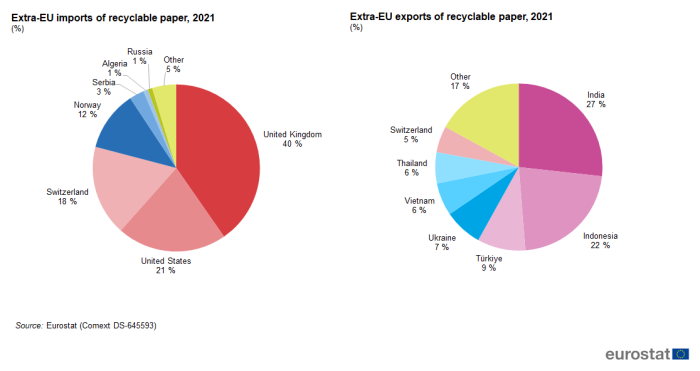 Three of the top-5 partners for extra-EU imports of recyclable plastic were European countries, of which the United Kingdom (47 %) had by far the largest share (see Figure 8). Türkiye (26 %) was the largest partner for extra-EU exports of recyclable plastic but the United Kingdom (14 %), Indonesia and Malaysia (both 12 %) also had double digit shares (see Figure 9). 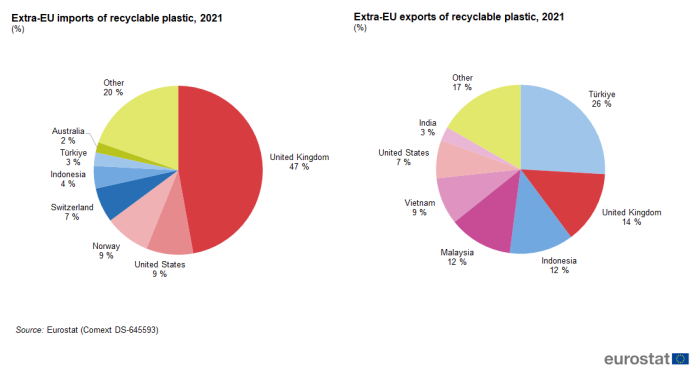 The United Kingdom was the largest partner for both extra-EU imports (49 %) and exports (48 %) of recyclable glass. Switzerland was the only other country with double digit shares both in imports (21 %) and exports (11 %), as shown in Figures 10 and 11. 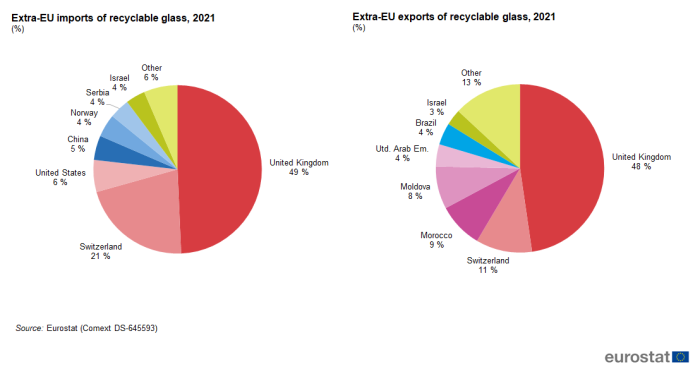 Product codes The products codes from the harmonized system for the products discussed in this article are:

Trade is an important indicator of Europe’s prosperity and place in the world. The bloc is deeply integrated into global markets both for the products it sources and the exports it sells. The EU trade policy is an important element of the external dimension of the ‘Europe 2021 strategy for smart, sustainable and inclusive growth’ and is one of the main pillars of the EU’s relations with the rest of the world.