Industrial turnover in the EU increased steadily until spring 2008 when a rapid decline set in (see Figure 1). Within a period of just over one year the index for European industrial turnover fell back to the level of 2005. Between April 2009 and July 2011, a steady increase brought turnover values almost back to the pre-crisis level. Between mid-2009 and 2016 turnover values in total industry more or less stagnated; the non-domestic market showed some decline which was compensated by a small increase in domestic markets. Only in recent years industrial turnover increased again on all market and surpassed level before the financial crisis. In February 2020 the Covid-19 crisis set in and industrial turnover fell by more than 35 index points in just two months. The following months from May to July saw a rapid recovery. In the first months of 2021 turnover in industry regained the pre-crisis level of February 2020 and is now almost 4 index points above that level.

Table 1 shows the annual rates of change of industrial turnover (mining and quarrying and manufacturing) in the European Union, the euro area, the EU Member States and some other countries for which data are available (calendar adjusted data). During the growth phase between 2005 and 2008, all EU Member States (with the exception of Malta) continued their industrial expansion which had already started some years before. Particularly high average growth rates were experienced in Belgium, Bulgaria, Romania, Croatia, Slovakia, and the Baltic countries.In 2009 industrial turnover dropped in all EU Member States. In the following years rates of change were generally rather low or even negative, only in 2017 and 2018 almost all Member States regained positive growth levels which generally continued in 2019 albeit at a lower level. 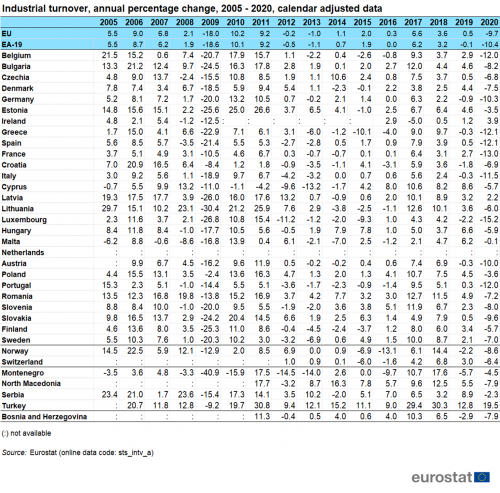 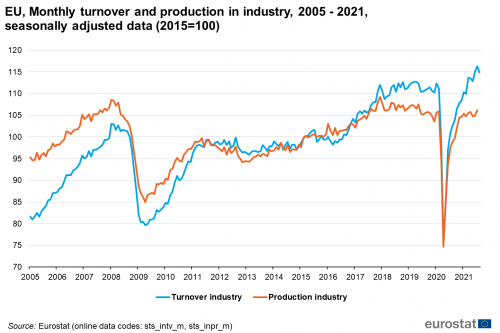 The definition of turnover is rather straightforward. It comprises basically what is invoiced by the seller. Rebates and price deductions are taken into account as well as special charges that the customer might have to pay. Turnover does not include VAT or similar deductible taxes.

Information on industrial turnover is often collected by business surveys. However, quite a number of National Statistical Institutes rely on administrative sources, i.e. VAT declarations, to obtain the data.

According to the European business statistics regulation and the Implementing regulation data on service turnover have to be made available by the National Statistical Institutes on a monthly basis. European aggregates are calculated by summing up weighted national indices. The weights correspond to the share of the countries in the turnover of industrial activities in the base year.

All results for the indicator of turnover in industries are published on the Eurostat website.

The turnover indicator in industry represents the development of sales in industry. It is therefore a value indicator which is influenced by two factors: changes in prices of the traded industrial goods and changes of the traded volumes of goods. Apart from the influence of price changes which constitute a differences between turnover and production volumes there are also some other methodological differences, e.g. production figures include stocked good which are not yet sold. Nevertheless the connection between both indicators is relatively close as is indicated by Figure 2 which represents the seasonally adjusted monthly indicator values for turnover and production in industry for the years 2005 - 2021.