Statistics produced on the basis of NACE are comparable at European and, in general, at world level. The use of NACE is mandatory within the European statistical system.

The international system of economic classifications 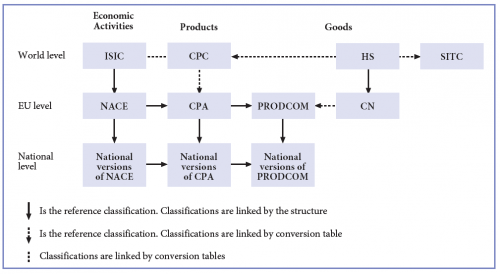 The comparability at world level of statistics produced on the basis of NACE is due to the fact that NACE is part of an integrated system of statistical classifications, developed mainly under the auspices of the United Nations Statistical Division. From the European point of view, this system can be represented as follows:

In order to ensure international comparability, the definitions and the guidelines established for use of NACE within the EU are consistent with those published in the introduction to ISIC.

Statistical classifications are characterised by:

NACE is the European standard classification of productive economic activities. NACE presents the universe of economic activities partitioned in such a way that a NACE code can be associated with a statistical unit carrying them out.

An activity as defined here may consist of one simple process (for example weaving), but may also cover a whole range of sub-processes, each mentioned in different categories of the classification (for example, the manufacturing of a car consists of specific activities such as casting, forging, welding, assembling, painting, etc.). If the production process is organised as an integrated series of elementary activities within the same statistical unit, the whole combination is regarded as one activity.

Structure and coding of NACE

NACE consists of a hierarchical structure (as established in the Regulation (EC) No 1893/2006), the introductory guidelines and the explanatory notes. The structure of NACE is described in the NACE Regulation as follows:

The divisions are coded consecutively. However, some “gaps” have been provided to allow the introduction of additional divisions without a complete change of the NACE coding. These gaps have been introduced in sections that are most likely to prompt the need for additional divisions. For this purpose, the following division code numbers have been left unused in NACE Rev. 2: 04, 34, 40, 44, 48, 54, 57, 67, 76, 83 and 89.