Economic indicators such as turnover or production do not develop smoothly over time. These data may follow a long-term trend but there are also strong infra-annual influences that make a direct month-on-month or quarter-on quarter comparison of unadjusted data difficult. This article will present the effects due to different seasonal patterns of economic time series and their statistical adjustment. Calendar effects which are e.g. due to holidays falling into different months will be discussed in another article.

An important aspect for the quality of the adjustment is that the residual component of the gross data is rather small, or in other words that most of the development of a time series is either explained by a trend, by seasonal effects or by calendar effects.

A major influence on many STS data series are the summer holidays. Figure 2 shows the average monthly variation of the production in industry for the years 2000 - 2019 for the EU-27. Total industrial production in August is around 16% lower than during the average year. Especially strong is the reduction in textile production (-42%). There are however remarkable differences between industries. The production of electricity, gas, and steam is highest in the months between November and February and lowest during the summer. Food production is spread out relatively evenly during most of the year but increases in September and October. 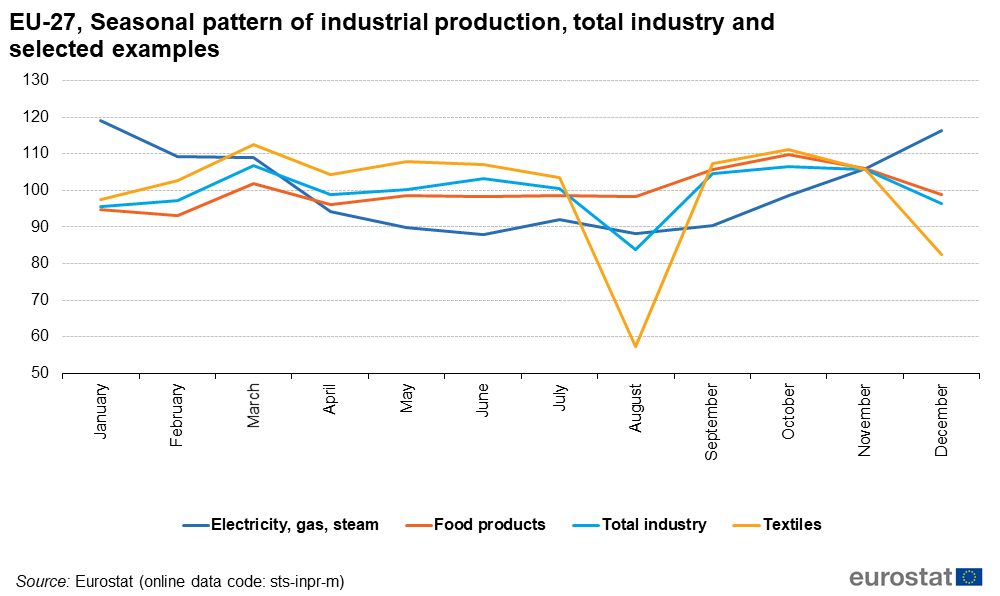 In construction production the pattern is similar to the one for total industrial production. However the levels of production during the winter months are generally lower due to the effects of the weather (Figure 3). 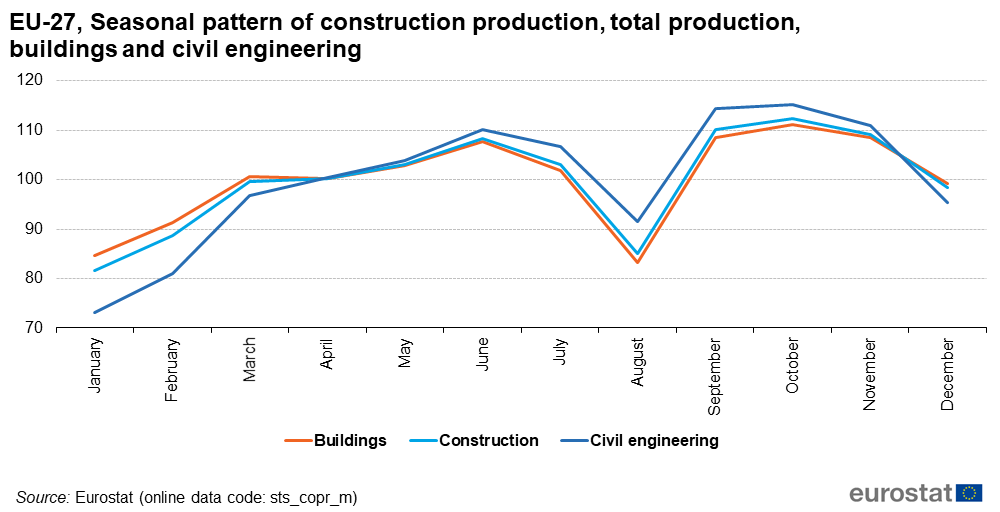 There are not only different seasonal patterns for different industries, there are also considerable differences in the seasonal patterns of different countries. Figure 4 shows the average seasonal variations in the industrial production of Germany, Italy and Sweden for the years 2000 - 2019. In Germany the overall variations are relatively small, the months with the highest production level are March, September and October. In Italy the production level varies much more strongly from month to month and shows a pronounced reduction during August (-40%). A similar strong reduction during the month of August can also be found in other southern European countries, e.g. in Spain, Portugal, France, and Slovenia. The seasonal pastern of Sweden is similar to the one of other Northern European countries (e.g. Finland, Denmark, Estonia) where the summer holidays generally are taken in July. 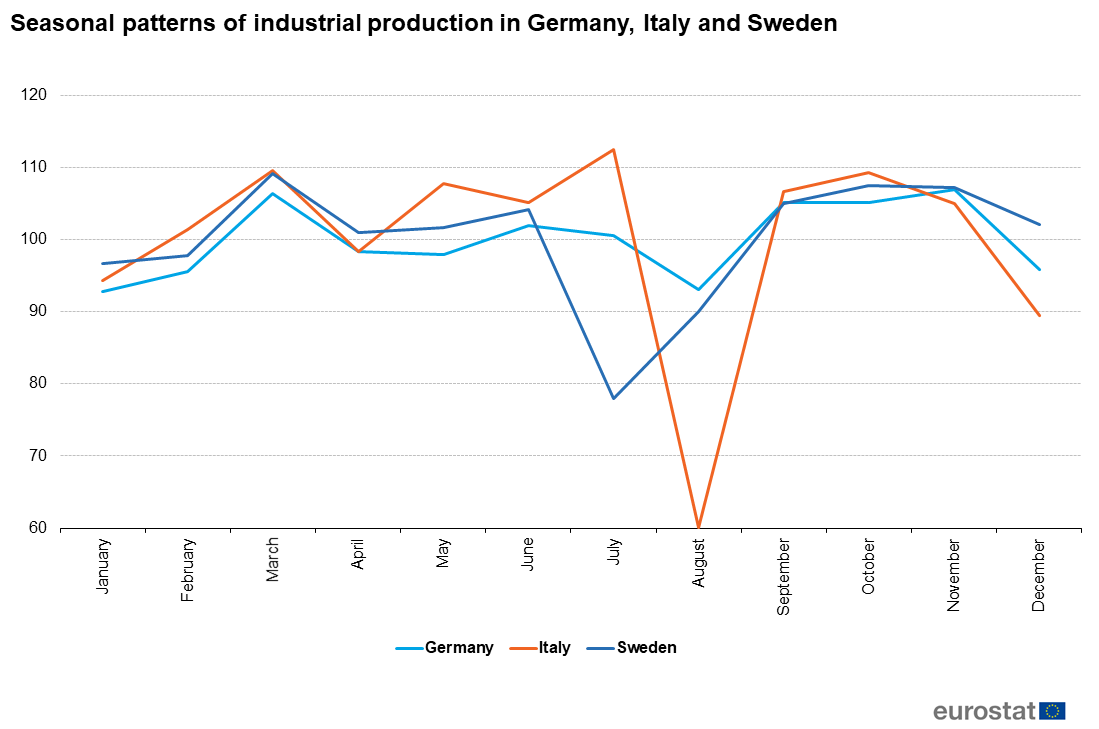 Generally, the STS Regulation does not oblige Member States to transmit seasonally adjusted data to Eurostat but only requires calendar adjusted data.

With some exceptions, seasonally adjusted data are calculated by Eurostat for all countries and for all data series. However, in a number of cases Member States calculate their own seasonally adjusted data and transmit them on a voluntary basis to Eurostat. Where this happens, Eurostat publishes the national results in order to avoid discrepancies between European published data and nationally published data.

As of 1 March 2012 Eurostat changed the method for seasonal adjustment of European Union (EU) short-term statistics (STS) data from a direct to an indirect approach. In this section the two approaches are described and their respective advantages and possible shortcomings are outlined.

Note that in this article the terms "direct" and "indirect" refer to the geographical dimension of the STS data, i.e. the way in which national data are aggregated to European data. In another context direct and indirect methods might be used, for instance, to aggregate data from sub-industry level to industry level etc.

In the indirect approach seasonally adjusted European aggregates are calculated as follows:

In the direct approach the national time series (either calendar adjusted or unadjusted data) were first weighted and aggregated and the seasonal adjustment was then performed directly on the European aggregate.

Table 1 illustrates the two methods with a simplified example for the industrial production index in July 2011. According to the indirect method the value of the index is 101.5 which is the weighted sum of the independently seasonally adjusted values for Germany, Spain, France and Italy. According to the direct method the value for the index is 99.8 which is calculated from the working-day adjusted weighted index for the four countries with a model that is specific for the aggregate of these four countries.

Benefits and shortcomings of the direct and the indirect approach

The indirect approach has several advantages. 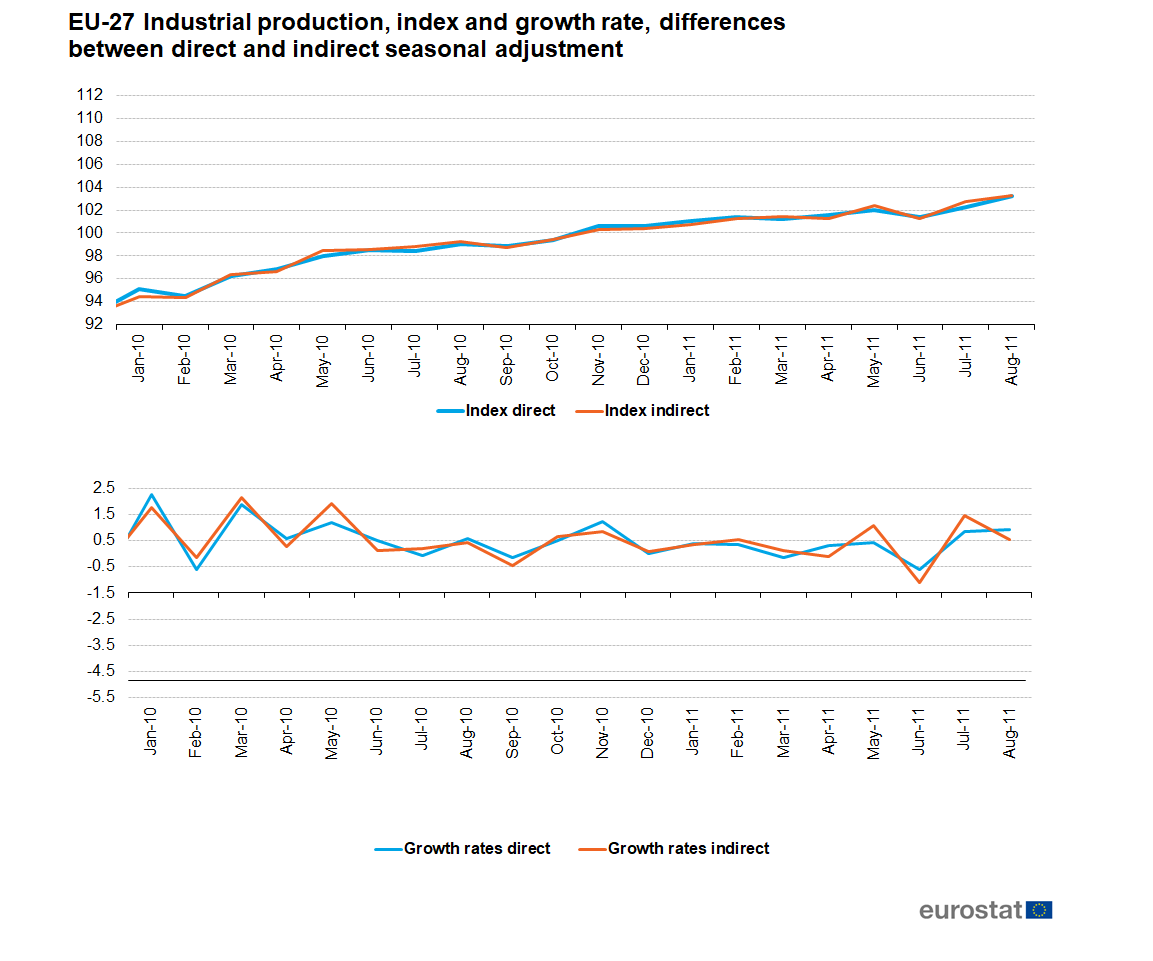 Which method – direct or indirect – is better cannot be decided a priori but depends on the circumstances (see above). For most European STS-indicators the quantitative differences between the two approaches are not very big.

Figure 5 shows the recent development of the EU-27 industrial production index calculated with the direct and the indirect method. For the indices differences are marginal. For the respective growth rates however differences can be observed. The advantage of the indirect method of guaranteeing consistency between European aggregates and national results is therefore of particular importance for the growth rates.

The new software is recommended by Eurostat and the ECB for seasonal and calendar adjustment of official statistics in the EU. Moreover, the ESS guidelines on seasonal adjustment recommend in a broader sense the use of JDemetra+ by Eurostat and by the Members of the European Statistical System.

The new software does not affect the basic adjustment method used by Eurostat. Eurostat continues to use the geographically indirect approach of seasonal adjustment (see above). Therefore time series that are adjusted for calendar and seasonal effects by the reporting countries are not affected by the introduction of the new software.

As regards the time series that are adjusted by Eurostat the change to the new software will not result in significant revisions for most European STS time series. The current seasonal adjustment specifications are converted to the new production system and comparisons of the results calculated with the old and the new software show differences that are smaller than 0.1 index points for the headline figures (growth rates) published in the Eurostat's regular news releases on volume of retail trade, industrial production and production in construction.

Differences may be bigger for those time series where the irregular component is significantly large which makes it difficult to split normal seasonal from irregular effects, typically for the 2- and 3-digit levels of the activity classification (NACE rev. 2.0) of volume and value indicators and for the STS labour indicators.

STS series for prices, including industrial producer prices, are not seasonally adjusted and will not be affected by this change.

At the same time Eurostat changed its method for the estimation of missing country data, An ARIMA forecast replaced the former method of applying the available countries' growth rates to the missing countries.