This article is about carbon dioxide (CO2) emissions classified by final use of products in the EU-27, also known as 'carbon footprints'. Eurostat uses a modelling approach to compile these estimates, based on economic information and air emissions accounts (AEA). Carbon footprints are one particular analytical application of AEA.

Eurostat also records and publishes the AEA, which include a range of greenhouse gas (GHG) emissions. AEA are suited for integrated environmental-economic analyses such as the 'footprints' presented here or for calculating emission intensities. As a third set of greenhouse gas emissions statistics, Eurostat disseminates GHG emissions classified by technical processes. These are recorded in so-called GHG emission inventories and form the official data for international climate policies.

Eurostat estimates that the total carbon footprint of EU-27 was equal to 6.8 tonnes of CO2 per person in 2019. The EU-27 emitted 0.29 tonnes CO2 per person more to produce exports in goods and services, than it avoided by importing goods and services. Services, that accounted for 25 % of the total carbon footprint, only accounted for 7 % of the direct CO2 emissions (transport, construction and real estate services are accounted for separately). The majority of the emissions originate from EU production activities.

The right-hand bar of Figure 1 shows the carbon dioxide (CO2) emissions due to final use of products within the EU-27 economy. The EU-27 final use of products encompasses consumption by private households and governments as well as the use of products for gross fixed capital formation, or in other words investments, such as buildings, plants and machinery, motor vehicles, and infrastructure. The estimate includes CO2 emitted to produce the final product, including emissions from intermediate inputs and CO2 emissions avoided due to importing intermediate and final products. The estimate of avoided CO2 emissions can be interpreted as an approximation of the CO2 emitted abroad to produce the imported products by the EU-27. As the point of reference is the final product, it gives a consumption perspective of CO2 emissions and is also referred to as consumption-based accounting. This type of estimate is also known as a ‘carbon footprint’. Eurostat's carbon footprint of the EU-27 measures how much CO2 would have been emitted due to EU-27's demand for products, if all imported products were produced within the EU-27 using an EU-27 average production technology.

The EU-27's total carbon footprint was equal to 6.8 tonnes CO2 per person in 2019. It consists of about 1.6 tonnes of CO2 per person directly emitted by private households from burning fossil fuels (for example for heating dwellings and fuelling private vehicles) and 5.2 tonnes/person emitted indirectly along the production chains of final products which were either consumed or invested in within the EU-27. A majority of the latter — 4.1 tonnes/person — stemmed from domestic production activities actually located in the EU-27. A smaller part, equal to 1.0 tonnes/person, is estimated to have been avoided by importing intermediate and final products into the EU-27, eventually for EU-27 final use. 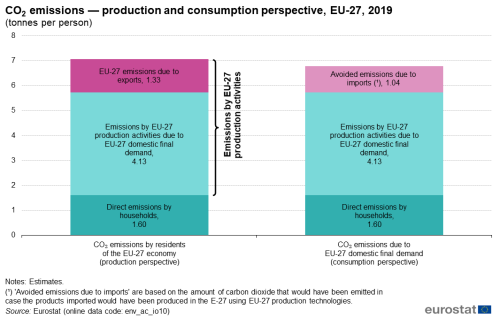 Eurostat's carbon footprint estimate is based on the ‘domestic-technology-assumption’. This assumption is used to approximate the emissions embodied in imported products by assuming that the imported products are produced with production technologies similar to those employed within the EU-27. By importing various goods and services from the rest of the world, the EU-27 can be seen to have ‘avoided’ ca. 1.0 tonnes of CO2 emissions per person that would otherwise have been emitted by its own production activities. However, average production technologies in the EU-27 may not match very closely the production technologies used outside the EU-27 to produce products that are imported by the EU-27. To estimate emissions embodied in EU-27 imports based on the production technologies used abroad, a global model and accompanying dataset that include all inter-industry trade flows are needed. Although several research projects have produced global datasets, a regularly produced, standardised dataset is currently not available. Eurostat is developing such a dataset in the FIGARO project, but due to the scope and complexity, it will take time before the development has advanced enough to use the dataset in carbon footprint modelling.

Note that, due to the modelling assumptions, among which the domestic technology assumption, Eurostat’s carbon footprint estimate is more uncertain than the production-based emissions reported in the air emission accounts.

Net emission balance due to trade 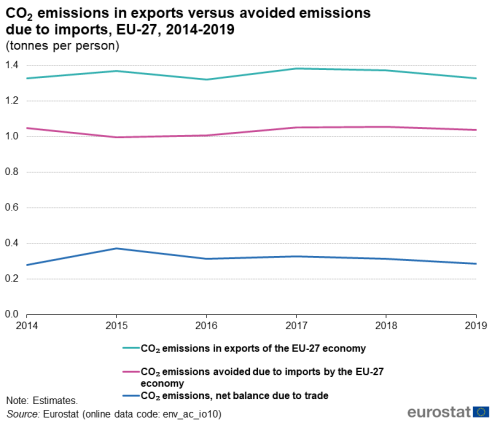 Products with largest contribution to the carbon footprint

The broad product group classified here as 'Materials & manufactured products' represents 23 % of the total CO2 emissions due to domestic final demand for products. The groups 'Utilities' and 'Construction and real estate' represent 11 and 12 % of the CO2 emissions, respectively. Transport accounts for 6 %. The group 'Other services' represents with 25 % a slightly larger share as the tangible products of the group 'Materials & manufactured products'. Whereas services generally emit relatively little CO2 directly (7 %, source: air emission accounts), the CO2 footprints of the services product groups clearly show that the demand for some of these services is also an important driver of CO2 emissions, due to the indirect CO2 that is emitted to supply these services.

Note that, in Figure 3, the reported CO2 emissions for these broad product groups cover the CO2 emissions due to domestic demand for products, which is 76 % of the total EU-27 carbon footprint. The other 24 % consists of direct emissions by households, which amounts to 1 603 kg of CO2 emissions per person. 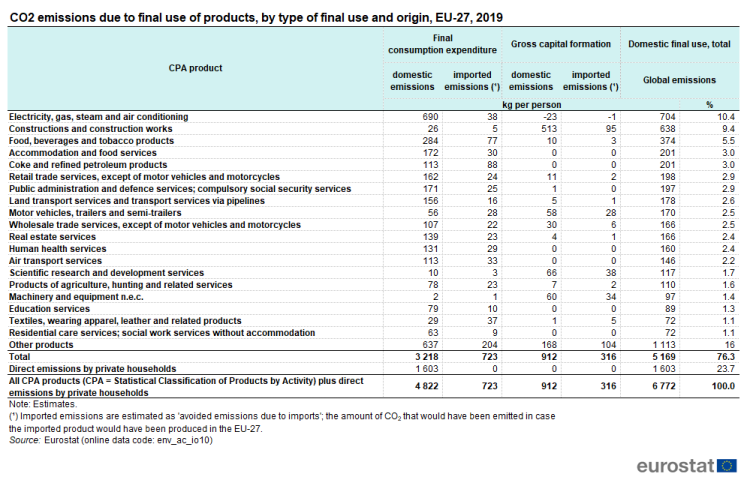 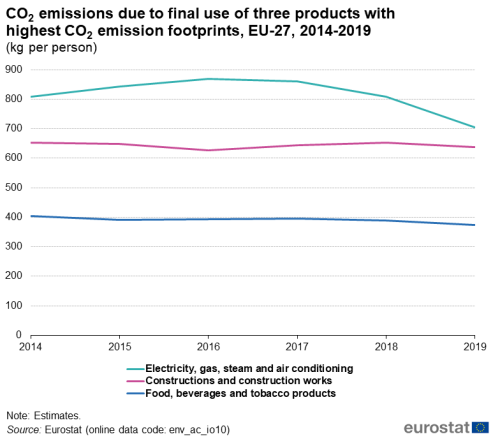 Two main Eurostat data sources feed into the modelling to compile the estimates presented above.

The carbon footprint estimates are based on single-region environmentally extended input–output modelling. The modelling is based on the aforementioned air emissions accounts which are integrated with ESA supply and use tables. The latter ESA supply and use tables have to be estimated for the aggregated EU economy; the latest reference year available is 2019 because this estimation procedure has been discontinued.

Please note that the subdivision into domestic and exported emissions shown on the left-hand side of Figure 1 — the production perspective — is also a result of this modelling. The model is implemented as Excel tool and available via Environment – methodology.

The modelling results are published in the dataset 'Emissions of greenhouse gases and air pollutants from final use of CPA08 products - input-output analysis, ESA 2010 (env_ac_io10). This dataset contains estimates not only for CO2 emissions, but for all greenhouse gas emissions, as well as several air pollutants.

Estimates for the most recent year in the dataset are estimated based on national accounts data for the year before and early estimates of air emissions accounts.

Supply and use tables portray production and consumption activities of national economies in a detailed manner. They form the basis for so-called input–output models and analyses. Both the tables and the models constitute powerful tools for addressing a range of policy areas. The focus of these models is generally made through an analysis of long-term structural changes within economies, for example, by studying value added shares, trade shares, or accumulated value added along certain production chains.

By adding environmental information (for example, air emissions or the use of energy) to these input–output models, it is possible to extend their analytical scope. Environmentally extended input–output analyses are of particular relevance for policy areas such as sustainable production and consumption, the sustainable use of natural resources, and resource productivity.