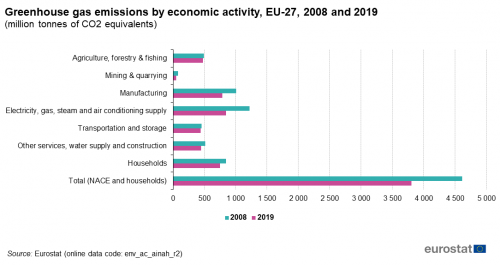 This article is about emissions of greenhouse gases (GHG emissions) classified by emitting economic activities. Eurostat records and publishes these in air emissions accounts (AEA), one of the modules in the European environmental economic accounts (for which the legal basis is Regulation (EU) No 691/2011). AEA are suited for integrated environmental-economic analyses such as calculating emission intensities or 'footprints'.

In 2019, GHG emissions generated by industries and households in the EU-27 stood at 3.8 billion tonnes of CO2 equivalents.

Air emissions accounts offer a detailed analysis by 64 emitting industries (classified by NACE) as well as households as defined and classified within national accounts. For the purpose of this article these 64 industries have been further aggregated to six groupings.

In most activities carbon dioxide was the most emitted greenhouse gas. Agriculture, forestry and fishing and mining and quarrying were the only activities where emissions of methane and nitrous oxide (expressed in CO2 equivalents) were greater than those of carbon dioxide (Figure 2). 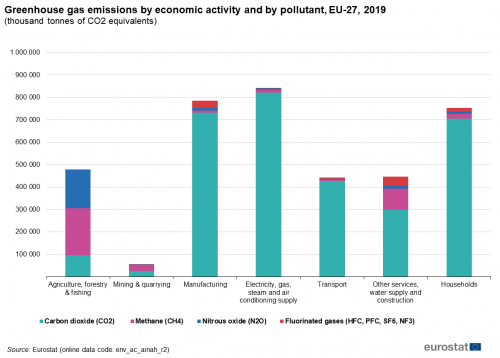 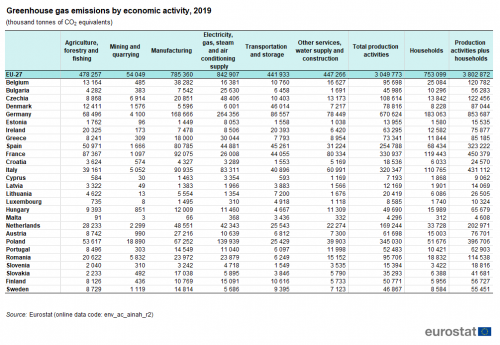 The breakdown of production activities into 64 classes is the same as for economic statistics (national accounts), therefore enabling integrated analyses. Figure 3 compares emissions of ozone precursors with the gross value added (GVA) for the 64 production activities (NACE classification). 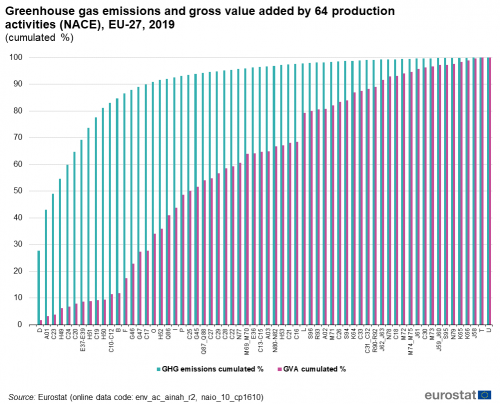 Eurostat calculates early estimates for greenhouse gases in air emissions accounts (timeliness: T+12 months). The developed methodology is based on the Proxy GHG inventories published by the European Environment Agency. In Figures 1, 2, 3 and Table 1 of this article, year 2019 data are the early estimates calculated by Eurostat.