General government expenditure in the EU on general public services made up 6.2 % of GDP in 2020. 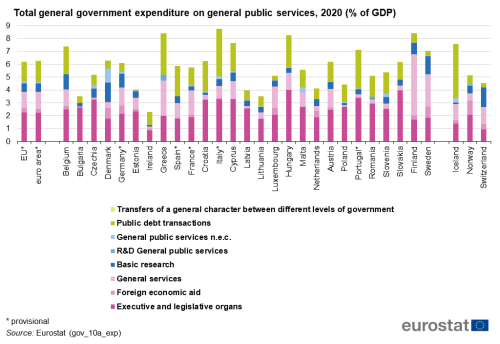 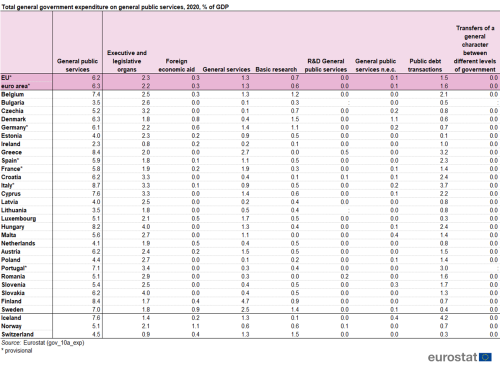 In Italy (8.7 % of GDP), followed by Greece and Finland (both 8.4 % of GDP) as well as Hungary (8.2 % of GDP) expenditure related to 'general public services' was higher than in the other reporting countries.

Ireland (2.3 % of GDP), Bulgaria and Lithuania (both 3.5 % of GDP), Estonia and Latvia (both 4.0 % of GDP) were the countries reporting the lowest levels of expenditure on 'general public services' for 2020. This was partially due to the relatively low level of general government gross debt in Bulgaria, Estonia, Latvia and Lithuania as well as generally low levels of total expenditure in these countries.

Within the division 'general public services', expenditure related to the COFOG group 'public debt transactions' amounted to 1.5 % of GDP for the EU and 1.6 % of GDP for the euro area in 2020. At the level of the reporting countries in 2020, expenditure in this COFOG group amounted to 3.7 % in Italy, 3.2 % in Greece, followed by Portugal at 3.0 % of GDP. Iceland reported 4.2 %. The relatively high amount for Iceland is explained by the inclusion in government accounts of units engaged in providing loans. At the other end of the scale, total expenditure in 'public debt transactions' amounted to 0.1 % of GDP in Estonia, 0.3 % of GDP in Luxembourg and Switzerland, and 0.4 % in Sweden in 2020. This COFOG group contains almost exclusively interest payments to service government gross debt as well as indirectly measured financial intermediation service charges (FISIM). Along with the group 'executive and legislative organs', the group 'public debt transactions' represents the largest share of expenditure within the COFOG division 'general public services' at EU and euro area level.

In 2020, at the level of the EU, around 23 % of the expenditure on general public services was in the form of 'property income, payable'. Almost entirely, this concerned interest on general government debt instruments. Around 25 % of expenditure in this function was in the form of 'compensation of employees', around 21 % on other current transfers (e.g. for third and fourth EU own resources allocated to group 'executive and legislative organs', grants in the context of foreign economic aid) and around 16 % on 'intermediate consumption'.

Evolution of expenditure on general public services over 1995-2020