General government expenditure in the EU on defence amounted to 1.3 % of GDP in 2020. 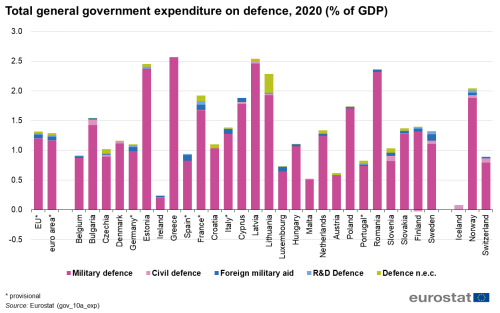 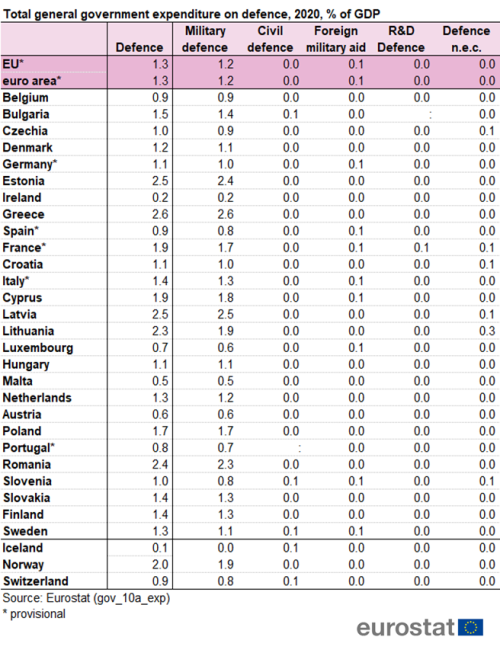 At the level of the EU, the major part of 'defence' expenditure is concentrated in the COFOG group 'military defence' (1.2 % of GDP in 2020). 'Civil defence', 'foreign military aid', 'R&D defence' and defence expenditure not elsewhere classified together amounted to around 0.1 % of GDP at the level of the EU. Research and development on defence made up a negligible part of government expenditure in all countries except France (0.1 % of GDP). 'Foreign military aid' amounted to 0.1 % of GDP for the EU, with notable amounts in Germany, Spain, France, Italy, Cyprus, Luxembourg, Slovenia and Sweden (all at 0.1 % of GDP).

Expenditure on 'defence' by type of transaction

At the level of the EU, a bit less than half (48.4 %) of total expenditure on 'defence' in 2020 was devoted to 'compensation of employees', that is wages and salaries as well as employers' actual or imputed social contributions. 28.1 % was devoted to 'intermediate consumption', consisting of government purchases of goods and services, except where these are regarded as capital formation. 20.4 % of defence expenditure related to capital investments in 2020, such as the purchase of new equipment.

For 'defence', the groups are

In particular, as regards defence expenditure, COFOG division 'defence' cannot be easily compared with NATO measures of defence expenditure. The main reasons are: COFOG is a classification by main purpose implying that some expenditure within COFOG 'public order and safety' might be counted under NATO methodology; the treatment of pensions in COFOG is within division 'social protection' and the COFOG treatment of employers' social contributions follows ESA 2010 and the time of recording may be different.