With the exception of Israel, female activity rates across the European Neighbourhood Policy-South countries were considerably lower than those in the EU.

The gender gap in employment rates was larger in the European Neighbourhood Policy-South countries than in the EU, except in Israel.

With the exception of Israel, agriculture, forestry and fishing as well as construction accounted for a higher share of the workforce in European Neighbourhood Policy-South countries than they did in the EU. 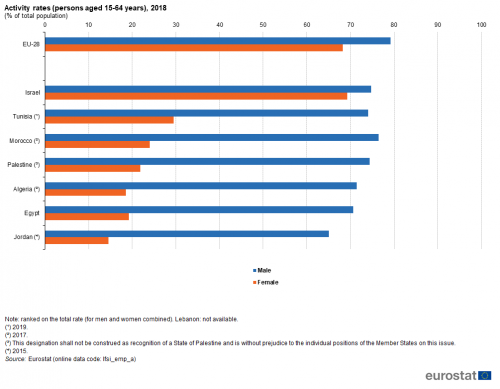 This article is part of an online publication and provides data on some key characteristics of labour markets in 8 of the 10 countries that form the European Neighbourhood Policy-South (ENP-South) region — Algeria, Egypt, Israel, Jordan, Lebanon, Morocco, Palestine [1] and Tunisia; no recent data for Libya or Syria. The article presents, among others, indicators such as activity rates, employment rates, an analysis of employment by economic activity, and statistics in relation to unemployment for the ENP-South countries and the European Union (EU).

The participation of women in the labour force in the ENP-South countries is generally low, although some countries have a range of initiatives designed to promote, empower and mobilise women’s participation. It should also be noted that many women work within the family unit in these countries and there may be difficulties in measuring their labour input for official statistics, for example, when working in a family business or helping with agricultural activities.

There was a narrowing of the employment gender gap in the EU-28 between 2008 and 2018, from 14 percentage points to 11 points (see Figure 2). With the exception of Israel (where the gap between the sexes was narrower than in the EU-28), employment rates for women ranged from 42 to 51 points lower than those for men in the remaining ENP-South countries for which data are available: Tunisia (2019 data), Palestine, Morocco (2017 data), Algeria (2017 data) and Egypt. 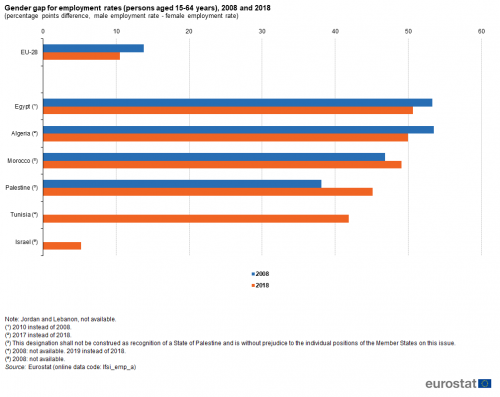 Table 1 shows an analysis of the structure of employment for 2008 and 2018. Within the EU-28, the services sector dominated the labour market and accounted for 72.1 % of those employed (aged 15 years or more) in 2018; its share of the total number of persons employed rose by 4.6 percentage points between 2008 and 2018. In Israel, 81.8 % of the workforce was employed in services, with the next highest share among the ENP-South countries being considerably lower, 62.4 % in Palestine. Among the six ENP-South countries for which data are available, the lowest share of services in the workforce was recorded in Morocco, at just over two fifths (42.2 %; 2017 data).

The share of the workforce in agriculture, forestry and fishing fell between 2008 and 2018 in the EU-28 as it did between the years shown in Table 1 for all four of the ENP-South countries with a long time series available: Algeria, Egypt, Morocco and Palestine. The share of the labour force employed in services expanded in three of these four countries, as the only decline was recorded for Palestine between 2008 and 2018. The shares employed in industry and construction also increased in three of the countries, with Morocco (2008-2017) the only exception for industry and Algeria (2008-2017) the only exception for construction. 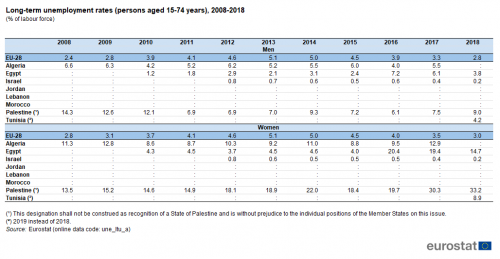 In the EU-28, long-term unemployment rates for men and for women were slightly higher in 2018 than they had been in 2008. In Israel the latest long-term unemployment rates for 2018 were clearly lower than those at the beginning of the series shown in Table 3, whereas in Egypt the rates had clearly increased. In Algeria and Palestine, the situation was mixed, with lower rates for men in 2017 (Algeria) or 2018 (Palestine) than in 2008 while the rates for women had increased during the same period.

By contrast, unemployment rates for those with a tertiary level of education reached a level in excess of one tenth of the labour force in the remaining four ENP-South countries for which data are available. In Egypt, Morocco (2017 data), Tunisia (2019 data) and Palestine, the highest unemployment rates analysed by educational attainment were recorded for those with a tertiary level of education. These differences may, at least in part, be explained by the difficulties faced by educated women in finding work in some of these countries, but may also be compounded by a higher proportion of jobs being concentrated in areas of the economy that are characterised as having relatively low productivity or a low level of skills. The highest unemployment rate among people with a tertiary level of education was recorded in Palestine (30.7 %).

Labour market statistics are increasingly used to support policymaking and to provide an opportunity to monitor participation in the labour market. In the aftermath of the global financial and economic crisis, these statistics have been used to monitor the knock-on effects of the crisis and subsequent recovery on labour markets which commonly lag behind fluctuations in economic output.

In March 2010, the European Commission launched the Europe 2020 strategy for smart, sustainable and inclusive growth. One of the headline targets for the strategy was to raise the employment rate for women and men aged 20-64 years old to 75 % by 2020. EU Member States could set their own national targets in the light of these headline targets and draw up national reform programmes that included the actions they aimed to undertake in order to implement the strategy.

In June 2016, the European Commission adopted a Skills Agenda for Europe (COM(2016) 381/2) under the heading ‘Working together to strengthen human capital, employability and competitiveness’. This was intended to ensure that people develop the skills necessary for now and the future, in order to boost employability, competitiveness and growth across the EU.