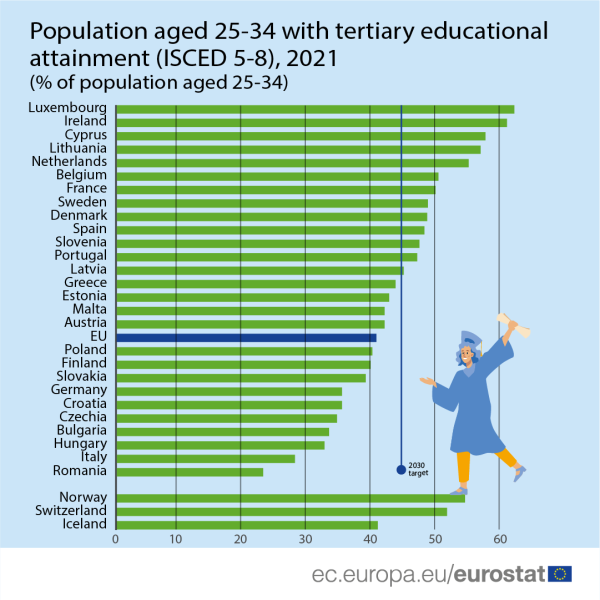 This article provides recent statistics on levels of education by country, age group and sex of the population in the European Union (EU), EFTA and candidate countries. The article forms part of an online publication on education and training.

Educational attainment is becoming an increasingly important factor, both in the labour market and for individuals as well as society in general. In the labour market, education is valued by employers when hiring employees. In the coming years it is expected that there will be an increased demand for highly skilled people with the relevant education in order to manage jobs that are more flexible and complex. More generally, having at least an upper secondary education is often considered as the minimum level that helps individuals to be equipped for a full participation in society and to live a fulfilling life. 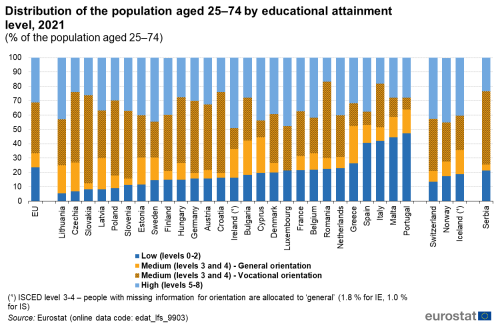 The distributions of the different educational attainment levels vary between the Member States as is shown in Figure 1. Lithuania, Czechia, Slovakia, Latvia and Poland had the lowest shares of people with a low level of education (all less than 10 %), while Spain, Italy, Malta and Portugal had the highest (all above 40 %). This proportion ranged from 5.4 % in Lithuania to 47.2 % in Portugal. Ireland and Luxembourg reported the highest shares of people with tertiary education (over 45 %; this is also the case for Norway), while Romania, Italy, Croatia and Czechia reported the lowest shares (together with Serbia, all below 25 %). Overall, the share of people with higher education ranged from 16.8 % in Romania to 49.2 % in Ireland.

For the medium level of education, the proportions were lowest in Spain and Portugal (below 25 %) while they were highest in Slovakia and Czechia (above 65 %). For this educational level, a distinction into general and vocational qualifications is possible, the latter being considered as more relevant for the labour market because they are more job-oriented. Looking at the orientation of the medium level qualifications, the share of people that had a qualification with vocational orientation was higher than the one with a general orientation in almost all countries. The only exceptions were Cyprus, Greece, Portugal, Ireland, Spain and Malta. The extent to which such qualifications prevail in a country reflects both national education systems and labour markets.

For people in the EU with a medium level of educational attainment, the share of those with a vocational oriented qualification was about the same for the two age groups: 76.7 % for those aged 25-54 and 80.8 % for those aged 55-74. However, these shares varied a lot between countries, from 100.0 % in Luxembourg for both age groups down to 34.2 % in Cyprus for the younger and 19.4 % in Portugal for the older. Moreover, notable differences between the age groups can be observed in countries with overall low shares of vocational qualifications: in Portugal the share of vocational qualifications was almost double for the younger (37.2 % vs. 19.4 %), and in Greece the share of the younger outnumbered that of the older by a factor of 1.6 (42.3 % vs. 27.3 %). A similar but less pronounced pattern can be observed for Spain, Cyprus and Ireland. Reforms in the national education systems in favour of vocational training could explain such developments. 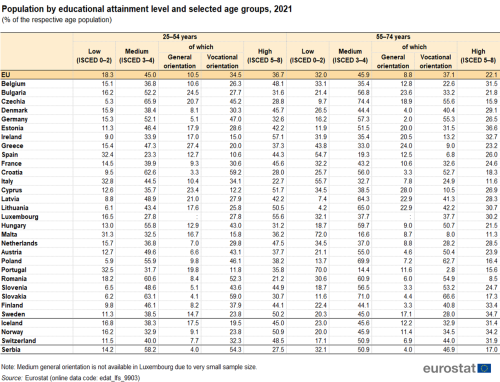 Within the strategic framework of the European Education Area several strategic priorities for the period 2021-2030 have been decided and seven EU-level targets have been agreed upon. Two indicators of educational attainment are used for policy monitoring, namely the EU-level target indicator on tertiary attainment and a complementary indicator regarding the share of people with at least an upper secondary education.

Having successfully completed tertiary education is becoming more important due to the increased demand for highly skilled individuals in the labour market within the European Union. Higher education plays an essential role in society by fostering innovation, increasing economic development and growth, and improving more generally the well-being of citizens. For more detailed information see the statistics explained article on tertiary education.

In February 2021, the Council approved the Resolution on a strategic framework for European cooperation in education and training towards the European Education Area and beyond (2021-2030). This resolution sets an EU-level target that the share of 25-34 year-olds with tertiary educational attainment should be at least 45 %, by 2030.

Figure 3 shows the share of the population aged 25-34 with tertiary education in 2021. Within the EU this share amounted to 41.2 %. Almost half of the EU Member States have already reached the target for 2030; this was also the case for Norway and Switzerland. The highest shares were found in Luxembourg and Ireland, slightly over 60 %. By contrast, the lowest shares of people with tertiary educational attainment were observed in Romania and Italy, where the proportion of persons with tertiary education was below 30 %.

... but completion of upper secondary education is also of interest for policy ...

The share of people aged 20-24 with at least an upper secondary qualification has been agreed as a supplementary indicator to the EU-level target for early leavers from education and training.

The skills and competences gained in upper secondary education are increasingly seen as the minimum credentials for a successful labour market entry as well as the basis for further learning and a fulfilling life.

Figure 5 below shows that in 2021 the average share of people aged 20-24 with at least an upper secondary education was 84.6 % within the EU. The lowest shares among the Member States were found in Denmark, Luxembourg and Germany with around 76 %; an even lower share was reported for Iceland with 66.6 %. The highest shares were found in Croatia, Ireland and Greece where over 95 % of people aged 20-24 had at least an upper secondary education. Compared to 2011, this share increased in all countries except Sweden, Slovakia, Czechia and Bulgaria. Spain and Portugal reported the largest increases, 16.8 pp. and 25.0 pp. respectively. 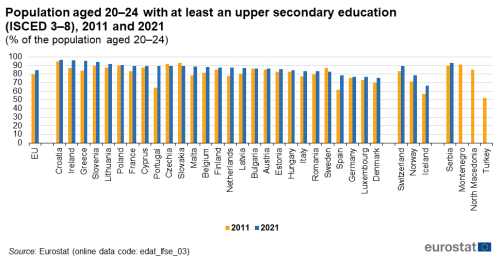 ... and more women than men have completed at least an upper secondary level of education

A higher proportion of women reached this level of education compared to men, as the share was 87.3 % for women and 82.1 % for men, see Figure 6. The share for women was higher than for men in all Member States except in Bulgaria and Romania. In Denmark and Spain the differences between men and women were the largest, with over 9 percentage points in advantage for women; this was also the case in Norway, and in Iceland the advantage was even more pronounced (14.3 pp.).

For data on educational attainment based on the LFS the International Standard Classification of Education 2011 (ISCED 2011) is applied as from 2014. Up to 2013 ISCED 1997 is used.

At this level of aggregation data are comparable over time for all available countries except Austria and Estonia.

As from 2021, for ISCED levels 3 and 4, a breakdown by orientation general/vocational is available for all age groups. Up to 2020, this breakdown is only available for those aged 15-34.

Educational attainment is the visible output of the education systems and forms a measure of their success. For individuals, achievement levels have a major impact, both personally and professionally, on the quality of life and job opportunities. The level of educational attainment people reach is measured according to the International Standard Classification of Education (ISCED).

The February 2021 Council resolution on a strategic framework for European cooperation in education and training towards the European education area and beyond (2021-2030), builds on the previous frameworks for European cooperation in education and training (ET), namely the ET2010 and ET2020 frameworks. It fixes five strategic priorities: improving quality, equity, inclusion and success for all; making lifelong learning and mobility a reality for all; enhancing competences and motivation among teaching professionals; reinforcing European higher education; and supporting the green and digital transitions. The document also sets out seven EU-level targets, the first five of which are to be achieved by 2030. The EU-level target for tertiary level attainment is that the share of 25-34 year olds with tertiary educational attainment should be at least 45 %. One supplementary indicator complementing the EU-level target on early leavers from education and training is defined as the share of people aged 20-24 with at least an upper secondary qualification. For more information regarding early leavers see the statistical explain article on the subject.

Indicators on educational attainment – amongst others – are also used to reflect the principles of the European Pillar of Social Rights and to monitor the Sustainable Development Goals.