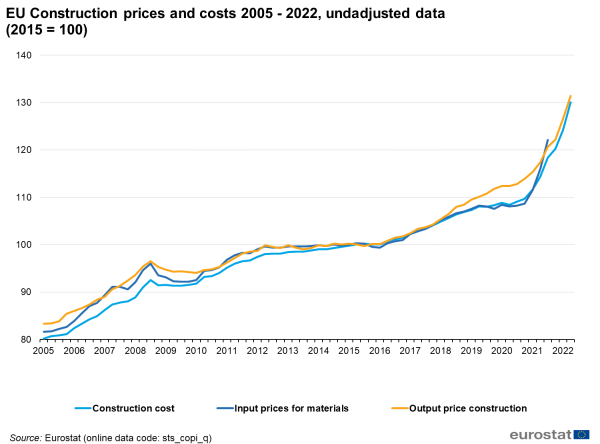 The construction cost index (CCI) is a European Union (EU) business cycle indicator showing the trend in the cost for new residential buildings.

The current European business statistics regulation (EBS-R) (EC) No 2019/2152 calls for quarterly indices on construction costs for new residential buildings (excluding residences for communities). Countries that do not have data on construction costs may use the construction producer price indices (CPPI, sometimes also referred to as “construction output price index”) as an approximation. Some countries produce both - cost and price - indicators. Some countries also produce monthly cost indicators on a voluntary basis. Figure 1 shows that the indicators for costs and prices for the EU develop in a very similar way (a European labour cost indicator cannot be calculated as a result of a low coverage).

Between 2005 and mid-2008 construction costs (for residential buildings) increased relatively steadily in the EU (Figure 1). After peaking in the third quarter of 2008 the index began to fall and reached its lowest level about one year later. In total, however, the decline was not particularly pronounced. In 2010, the index started to increase again. Less than one year later it regained the level it had displayed before the financial and economic crisis. Until 2012, the indices increased further and then stagnated for a relatively long period between 2012 and 2016, when another continuous increase set in. The construction cost and prices indices were not strongly affected by the Covid-19 crisis in the first and second quarters of 2020.

In 2021 a dynamic growth set in that was particularly driven by the costs for input materials. Between the first quarter of 2021 and the second quarter 2022, i.e. within only one year and a half, construction cost increased by more than 16.5 % and output prices for construction by 14.0 %.

The development of the construction cost index was mainly influenced by the material cost component (which accounts for around two thirds of the total costs), while the labour cost component continued to grow even during the crisis - although at a slower pace than before.

Table 1 provides the annual growth rates for the EU, the euro area, and the Member States for the period between 2005 and 2021. With few exceptions, the EU countries display a development that is broadly similar to the one for the EU aggregate. Some differences can be found in the timing and the size of the decrease in the cost index.

During the financial and economic crisis the construction cost index for residential buildings started to fall first in Ireland (in 2008), in the other countries this development occurred several months later. The reductions in the cost index were relatively strong in Ireland and in the Baltic States. In a number of countries the rates of change in 2008 and 2009 remained positive although generally lower than in the first half of the period under observation. In 2011, only Ireland experienced a decline in the construction cost index.

During the years 2011 to 2016, construction costs annually increased by around 1.5 %, during the last three years the growth accelerated to around 2.3 % per year. The annual data for 2020 do not show a strong effect of the Covid-19 pandemic. While during the first quarters of the year the costs might have stagnated or declined, the development during the second half of the year compensated this. In 2021 prices increased quite strongly in the majority of countries with double-digit growth rates in Hungary (15.7 %), Malta (12.4 %), Bulgaria (12.2 %), Slovenia (10.7 %), and Austria (10.4 %). 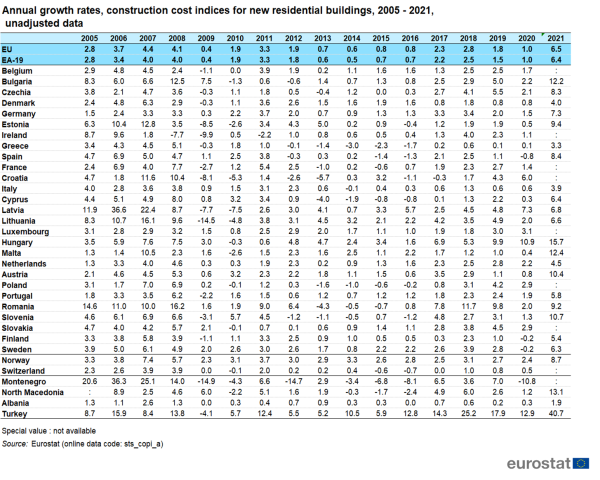 The Regulation (EU) No 2019/2152 of 27 November 2019 (European Business Statistics Regulation) calls for quarterly indices on construction costs for new residential buildings, excluding residences for communities. Data are revised when additional information from national statistical authorities becomes available. In general, no special surveys are undertaken in order to calculate the construction cost index since it is possible to use other indices that are already available from different sources.

Data collected by Member States are transmitted to Eurostat as an index. The weighting for aggregating this index between Member States is generally turnover in building construction and is derived from information obtained from structural business statistics or other statistics. The base year is usually changed every five years.

The CCI presents the total costs for new buildings. In addition, an index for material costs and an index for labour costs are available. Material and labour costs represent the most important cost components for construction (Figure 2).

Countries that do not have data on construction cost may use construction producer prices (construction output prices) as an approximation (see above). 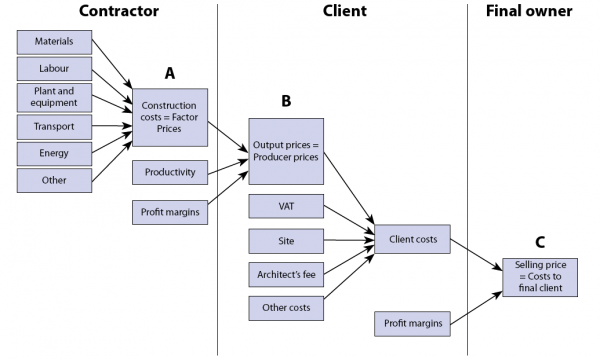 The CCI provides important additional aspects to the information provided by other construction data. The CCI measures developments from the points of views of the building contractors. It reflects the prices that they have to pay for the input factors in the construction process (see A in Figure 2). The cost index therefore has to be distinguished from the producer price index for construction (also called output price index) which is seen from the point of view of the contractors' clients. The producer price index/output price index (see B) shows the development of prices paid by the client to the contractor. These two indices can be distinguished from the “selling price index” (item C) which measures changes in the prices paid by the final owner of the output to the client. It includes the price of the land, architect’s fees and client’s margins.

The CCI measures the relationship between the costs, at constant technology and constant input mix, that are associated with the implementation of a fixed amount of construction work. This type of index is different from a producer price index, which measures movements in prices charged to clients of construction work. This is especially true when the price index is calculated from tender prices, which can vary from time to time and place to place depending on the state of competition and market conditions. Producer price indices include changes both in productivity and in the contractor’s margins. This corresponds to item B in Figure 2.

The material costs index is generally calculated using materials prices and should be based on actual prices rather than list prices. They should also be based on a sample of products and suppliers. Prices are exclusive of VAT.

It is assumed that neither the construction method nor the building organisation have undergone any change, and consequently the calculations take no account of factors such as productivity improvements, more efficient utilisation of materials, etc. which may influence cost trends. Changes in the profit margins, which also affect a producer price index, have not been taken into account either.

The construction producer price index (CPPI) measures the development of transaction prices for the quarterly construction output. According to the STS-Regulation National Statistical Institutes may produce the CPPI as an approximation for the construction cost index (see above).

The CPPI is an output index – it measures price changes from the makers of a product. The appropriate price for calculating the PPI is the basic price that excludes VAT and similar deductible taxes which are directly linked to turnover. Price indices are calculated as a weighted average of the relevant products.