This article is about emissions of air pollutants classified by technical processes. These are recorded in so-called emission inventories for air pollutants and form the official data for international policies on transboundary air pollution.

In addition, Eurostat disseminates emissions of air pollutants classified by emitting economic activities. Those are recorded in air emissions accounts (AEA). Furthermore, Eurostat estimates and disseminates 'footprints' which are emissions of air pollutants classified by products that are finally demanded by households or government, or that are invested in or exported.

Air pollutants are emitted from human activities, mainly the combustion of fuels. Thanks to a wide range of environmental policy measures, emissions of air pollutants in Europe decreased significantly over the last 28 years. 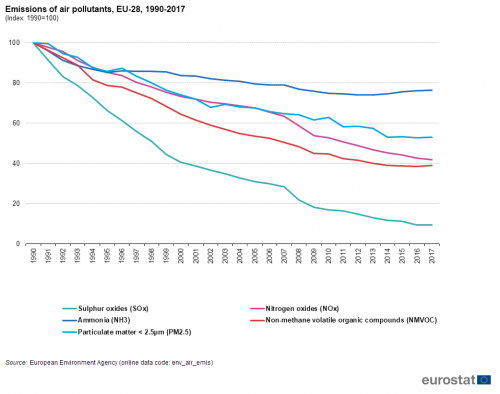 For the last 28 years (1990 to 2017) the EU-28 recorded reductions in emissions of all air pollutants considered in this article (see Figure 1). The biggest fall was reported for sulphur oxides (SOx) which decreased by 90%, followed by non-methane volatile organic compounds (NMVOC) and nitrous oxides (NOx), which declined roughly by 60 %. Emissions of fine particulate matter (PM2.5) decreased by almost a half since the year 1990. The smallest decrease was reported for ammonia (NH3) emissions, which fell by roughly one quarter.


The following main findings are widely based on the European Union emission inventory report 1990–2017 under the UNECE Convention on Long-range Transboundary Air Pollution (LRTAP)(published by EEA).

The pollutant with the greatest reduction in emissions across the EU-28 has been SOx. Emissions of SOx in 2017 stood at 2.3 million tonnes compared to 25 million tonnes in 1990 (see Figure 2). The majority of SOx emissions were reduced in the energy production and distribution sector (15.3 million tonnes less). SOx reductions have been a result of a combination of policy measures: 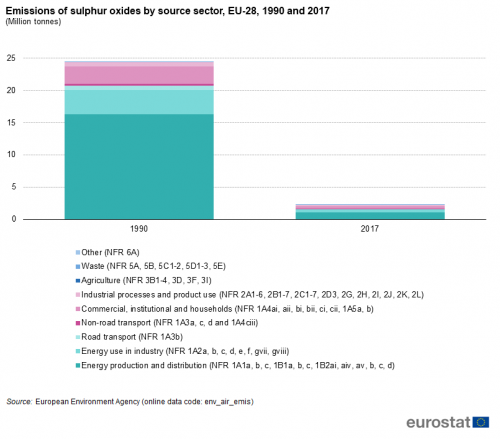 Over the last 28 years, EU-wide emissions of NOx more than halved from 18 to 7.5 million tonnes (see Figure 3). The largest reduction took place in road transport (4.6 million tonnes less) which is the main contributing sector to total NOx emissions. Emission reductions from the road transport sector are primarily a result of fitting catalysts to vehicles. The legislative standards known as 'Euro' standards have driven this move. NOx emissions in the energy production and distribution sector decreased by 3 million tonnes thanks to the introduction of specific abatement technologies (e.g. low-NOx burners, flue-gas abatement techniques), and switching fuel from solid to gaseous. 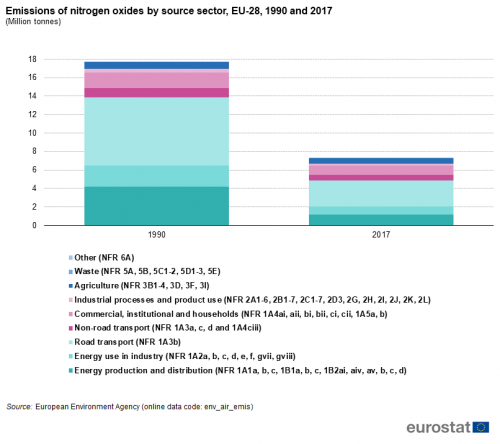 Emissions of NH3 almost entirely derive from agriculture (see Figure 4). Compared to other pollutants, reductions in NH3 emissions were moderate. In the EU-28 over the past 27 years the emissions of NH3 decreased only by roughly one quarter from 5.2 to 3.9 million tonnes. Main reductions were achieved through better manure management. Nowadays, ammonia is likely to be the most significant acidifying gas emitted in Europe. 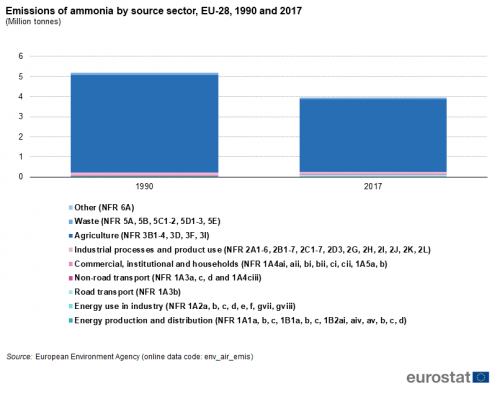 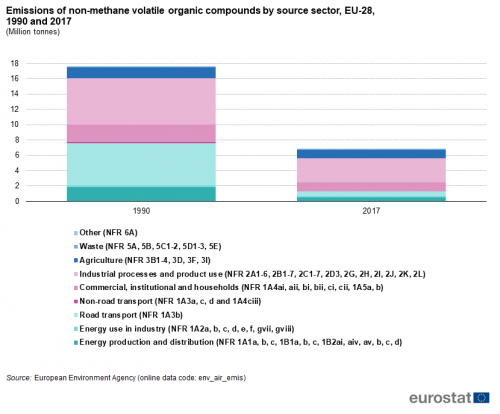 EU-wide emissions of PM2.5 dropped by almost 50 % between 1990 and 2017 (see Figure 6). Most significant reductions took place in the energy production and distribution sector, in the commercial, institutional and households sector, as well as in road transport. 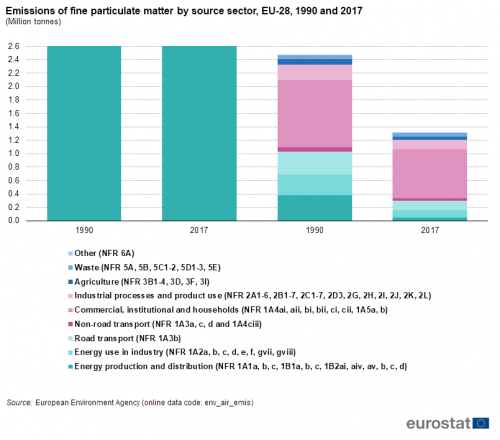 Air pollution has been one of Europe's main environmental policy concerns since the late 1970s. The control of emissions from mobile sources, improving fuel quality and promoting and integrating environmental protection requirements into the transport and energy sector are part of these aims.