This article is about emissions of air pollutants classified by technical processes. These are recorded in emission inventories for air pollutants and form the official data for international policies on transboundary air pollution.

In addition, Eurostat disseminates emissions of air pollutants classified by emitting economic activities. These are recorded in air emissions accounts (AEA). Furthermore, Eurostat estimates and disseminates 'footprints' which are emissions of air pollutants classified by products that are finally demanded by households or government, or that are invested in or exported.

Air pollutants are emitted from human activities, mainly the combustion of fuels. Thanks to a wide range of environmental policy measures, emissions of air pollutants in Europe decreased significantly over the last 30 years. 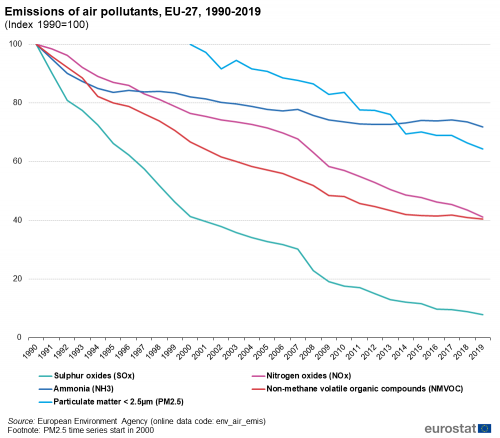 For the last 30 years (1990 to 2019) the EU recorded reductions in emissions of all air pollutants considered in this article (see Figure 1). The biggest fall was reported for sulphur oxides (SOx) which decreased by 92 %, followed by non-methane volatile organic compounds (NMVOC) and nitrous oxides (NOx), which declined roughly by 60 %. Emissions of fine particulate matter (PM2.5) decreased by more than a third since the year 2000. The smallest decrease was reported for ammonia (NH3) emissions (28 %).

The European Union has set itself the goal to achieve levels of air quality that do not give rise to significant negative impacts on, and risks to, human health and the environment. Since the early 1970s, the EU has been working to improve air quality by controlling emissions of harmful substances into the atmosphere, improving fuel quality, and by integrating environmental protection requirements into the transport and energy sectors.

In 2018, the European Commission adopted a Communication A Europe that protects: Clean air for all that provides national, regional and local actors with practical help to improve air quality in Europe.

Via this website, you can find more information on what the European Union is doing to reduce national air pollution emissions as well as air pollution from the main sources, and thus improve air quality.