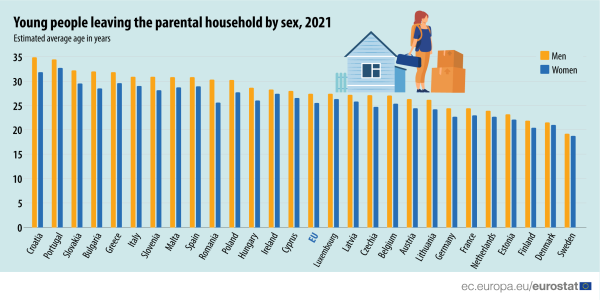 Leaving the parental home is considered a milestone in the transition from childhood to adulthood. The reasons behind this step may vary from being materially independent to studying, working, moving in with a partner, getting married and having children, etc. However, the path to independence may not be straightforward and may occur at different ages across EU countries, as shown in this article. This disparity may reflect the diversity of challenges that young people face across Europe, as well as cultural differences between countries.

This article presents data on the average age of leaving the parental home in the European Union (EU) as a whole, as well as in the individual EU Member States and Serbia. Special attention is given to geographical and gender differences, as well as on the developments over time.

This average varies a lot among the EU Member States. Portugal, Croatia, Slovakia, Greece and Bulgaria recorded the oldest average ages of leaving the parental home, at 30 years and over. Young people in Serbia also had left their parental household on average at an age older than 30. By contrast, Estonia, Denmark, Finland and Sweden showed the youngest average ages, 23 years or less.

The lowest average age of young people leaving their parental household was recorded in Sweden (19.0 years) while the highest was found in Portugal (33.6 years). 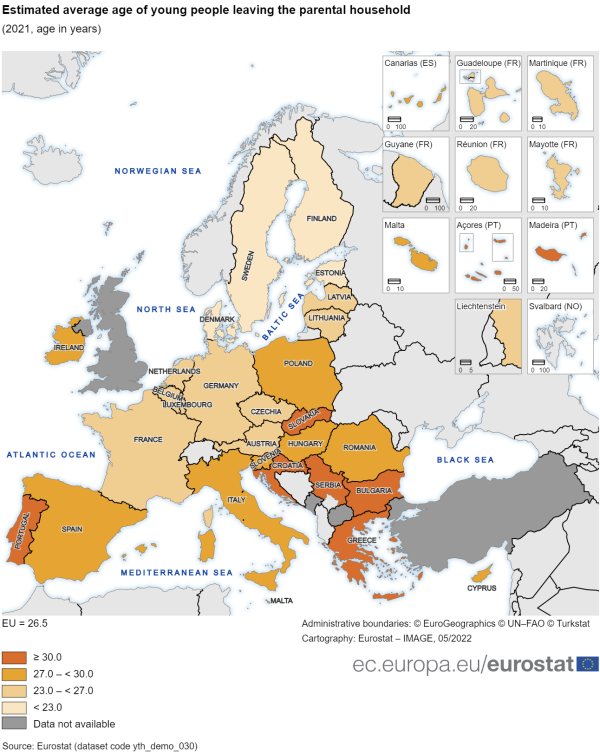 In 11 EU countries (Croatia, Portugal, Slovakia, Bulgaria, Greece, Slovenia, Italy, Malta, Spain, Romania and Poland), men left their parental home on average after the age of 30. By contrast, women moved out of their parent's home after this age in only 2 countries (Portugal and Croatia).

In 2021, the gender gap in the average age of leaving the parental home was 1.9 years at EU level. Among EU countries, the gender gap was the largest in Romania (4.7 years), Bulgaria (3.5 years) and Croatia (3.1 years). In Serbia, the gap was even wider, with 5.0 years. By contrast, the gender gap was smaller than a year in Ireland, Denmark and Sweden.

Figure 2 presents the long-term trend in the EU of the average age at which young people are moving out from the parental household.

Focusing on men, the age of moving out was 28.0 years in 2006, which was the highest point for the time series. From 2006 onwards, this age started to decline to reach its lowest point in 2019, of 27.1 years. Consequently, it dropped by almost one year between 2006 and 2019. Then, in 2020, the age of men leaving the parental home moved up by 0.3 years, the highest year-to-year increase since 2006. This important change between 2019 and 2020 was probably triggered by the COVID-19 pandemic, which might have led young people to reconsider moving out and remaining a bit longer at their parent’s home. Finally, between 2020 and 2021, the average age of young men leaving the parental household remained stable.

The long-term trend of the age at which women are leaving the parental household does not reveal as much fluctuation as for men: it only fell by 0.3 years, from 25.5 years in 2006 to 25.2 years in 2019. However, as for men, the average age of women leaving the parental household had its highest year-to-year increase from 2019 to 2020, of 0.3 years, most probably due to the COVID-19 pandemic, and then remained stable between 2020 and 2021. 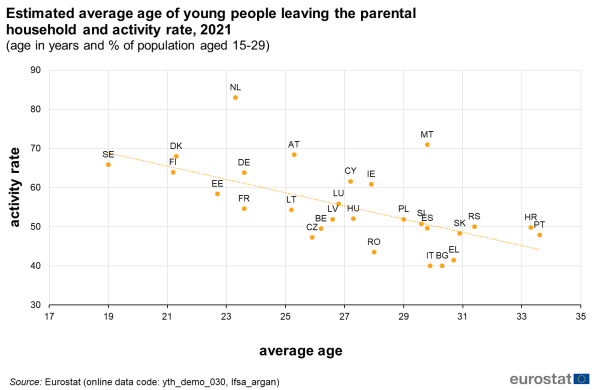 Source: Statistics presented in this article are derived from the European Union Labour Force Survey (EU-LFS). The EU-LFS is the largest European household sample survey providing quarterly and annual results on the labour participation of people aged 15 to 89. It covers residents in private households and excludes those in collective households. Conscripts in military or community service are not included in the results. The EU-LFS is based on the same target population and uses the same definitions in all countries, which means that the results are comparable between the countries.