This article presents statistics on transboundary waste shipments in the European Union (EU).

In the EU, the transboundary shipments of waste are regulated by Regulation (EC) No 1013/2006 on shipments of waste, commonly referred to as the Waste Shipment Regulation (WShipR). It implements the Basel Convention which bans exports of hazardous waste from OECD to non-OECD countries. According to the WShipR, all hazardous waste, as well as some problematic waste streams and other wastes defined by the WShipR, must be notified to the authorities before it is allowed to be shipped across borders. The terms 'export' and 'import' are used for transboundary waste shipments both within the EU and to other OECD countries. Detailed information about notified transboundary waste shipment can be found in the article on 'Waste shipment statistics based on the European list of waste codes'.

The main findings based on the amounts of shipped waste out of the Member States are described below.

Shipments of hazardous waste - total amount and per capita

Between 2001 and 2016, the amount of hazardous waste shipments from EU Member States to other EU Member States or out of the EU increased by 63 %, from 4.0 million tonnes in 2001 to 6.5 million tonnes in 2016, peaking in 2007 at 8.1 million tonnes. There was an increase of 23 % from 2012 to 2013, largely due to increased export from Germany, France and the United Kingdom. Sweden and Italy showed the largest decrease of hazardous waste shipments during this period. From 2013 to 2014 there was a decrease of 9 %, largely due to reduced exports from France and the United Kingdom (cf. Table 1). The Netherlands had a large fall in exported hazardous waste from 2009. This decrease can be partly explained by changes in the classification of the reported waste: some wastes reported earlier as hazardous were in fact non-hazardous. 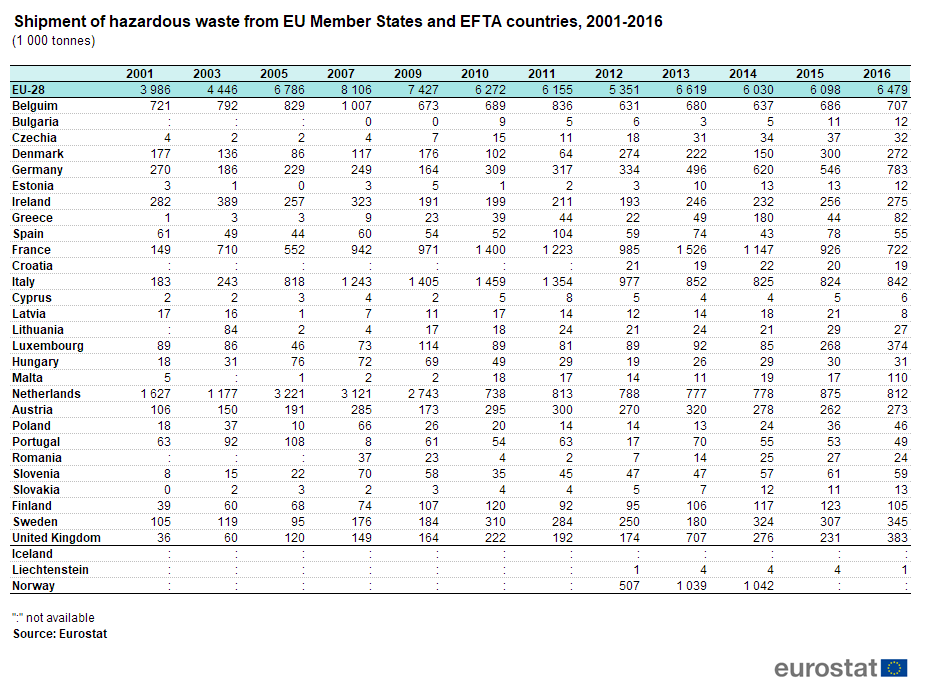 Over the period 2014-2016, EU-28 exports rose again by 7 %, mainly due to the increased exports from Denmark, Germany, Luxembourg, Malta and the United Kingdom whereas France, Greece and Latvia reduced considerably their exports over the same period (cf. Table 1). 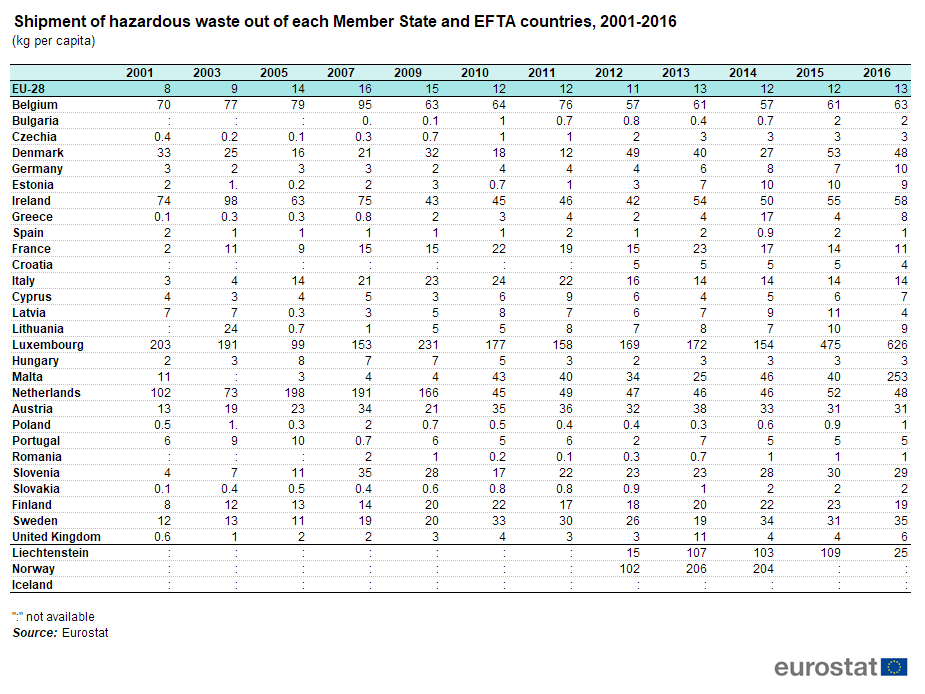 The interactive flow map on transboundary waste shipment shows, among others, the amounts of waste shipped out of each of the EU Member States (cf. Map1). 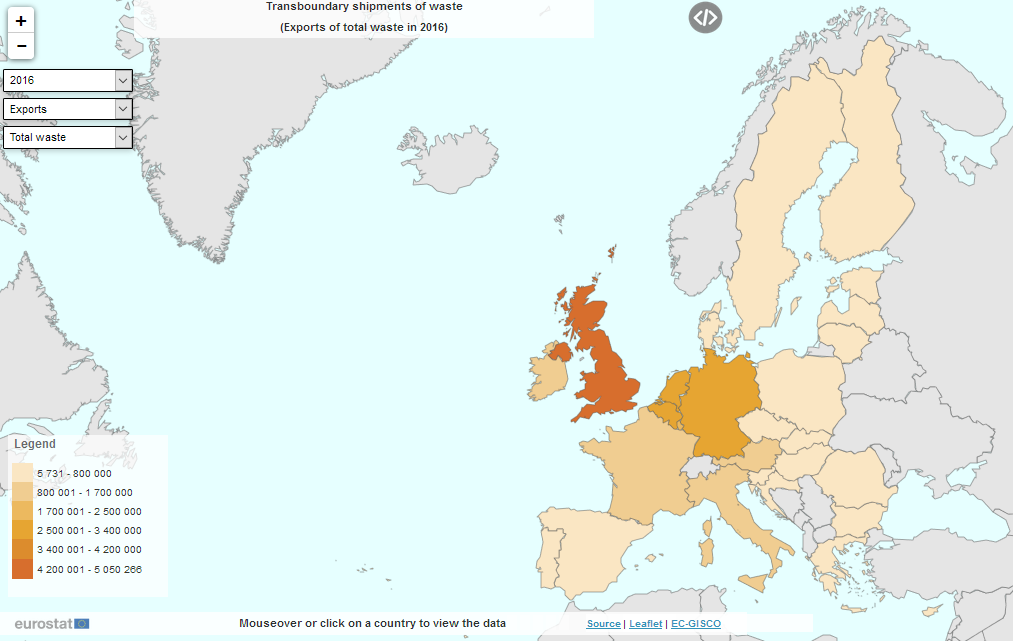 Map 1: Flow map transboundary waste shipments, 2016
Click on the map for an interactive view of the data. 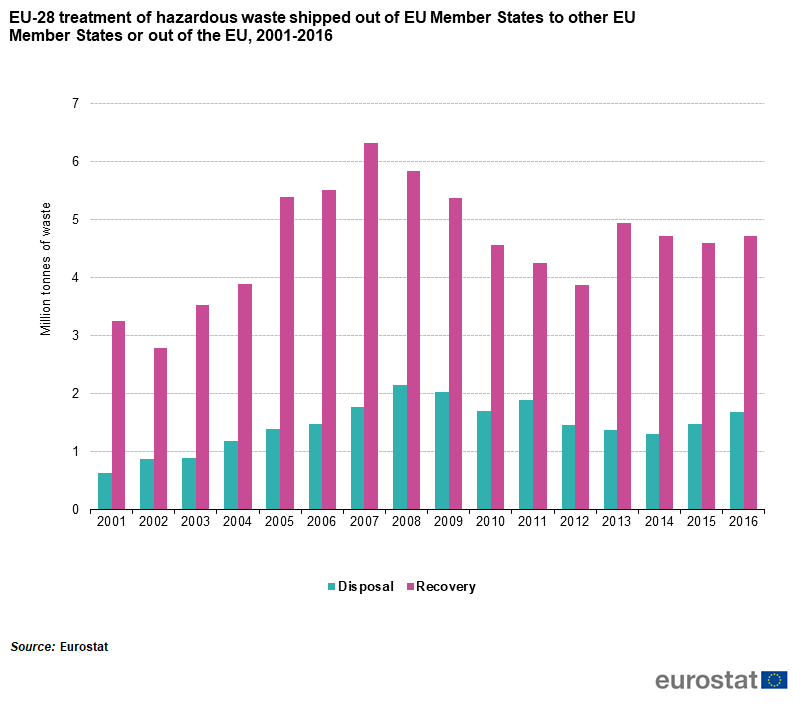 Figure 1:Treatment of hazardous waste shipped from EU to either other EU Member States or out of the EU 2001-2016
Source: Eurostat

As a percentage of the total, disposal has increased from 16 % in 2001 to 26 % in 2016. Correspondingly, the share for recovery has declined from 82 % to 73 % over the same period. However, since 2011 the amounts going to disposal have decreased and the amounts to recovery have increased.

The precise treatment of the hazardous waste must be reported by Member States. The treatment of waste is broken down by recovery and disposal operations listed in Annexes I and II to the Waste Framework Directive 2008/98/EC of the European Parliament and of the Council of 19 November 2008 on waste and repealing certain Directives. Incineration with and without energy recovery (codes R1 and D10, respectively, according to the Directive) dominates, accounting for 1.3 million tonnes, or about 20 % of the exported hazardous waste in 2016 (cf. Figure 2). The large difference of hazardous waste exported between 2009 and the following years for incineration can be explained by the change in the classification of Dutch waste. The changed classification resulted in an increase in the amount of non-hazardous waste shipped for incineration in the EU from 1.1 million tonnes in 2009 to 7.5 million tonnes in 2016. 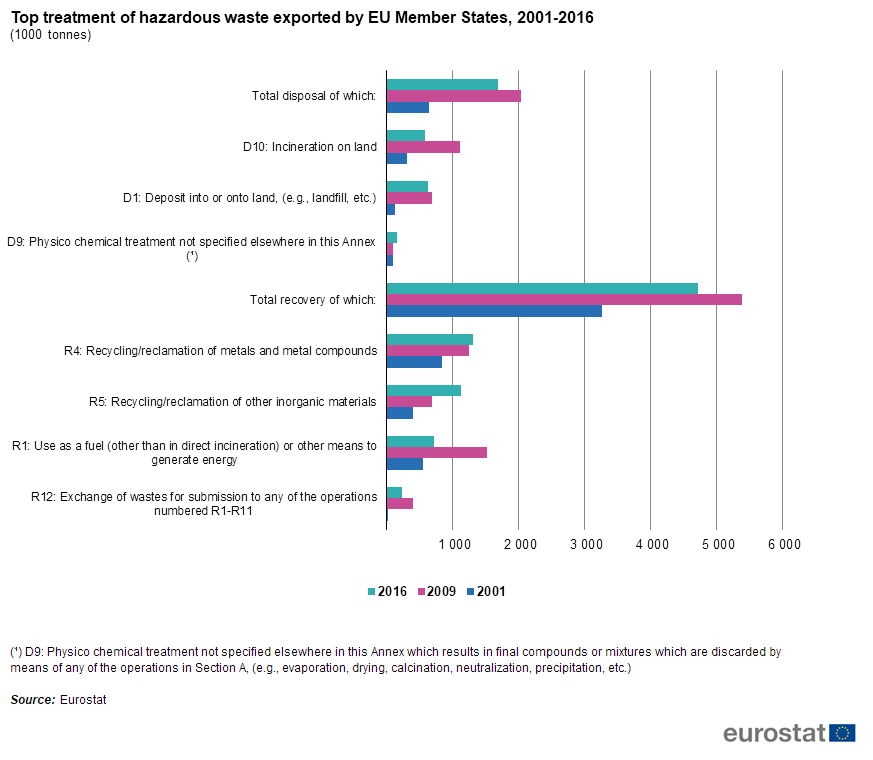 Shipments of hazardous waste within and out of the EU 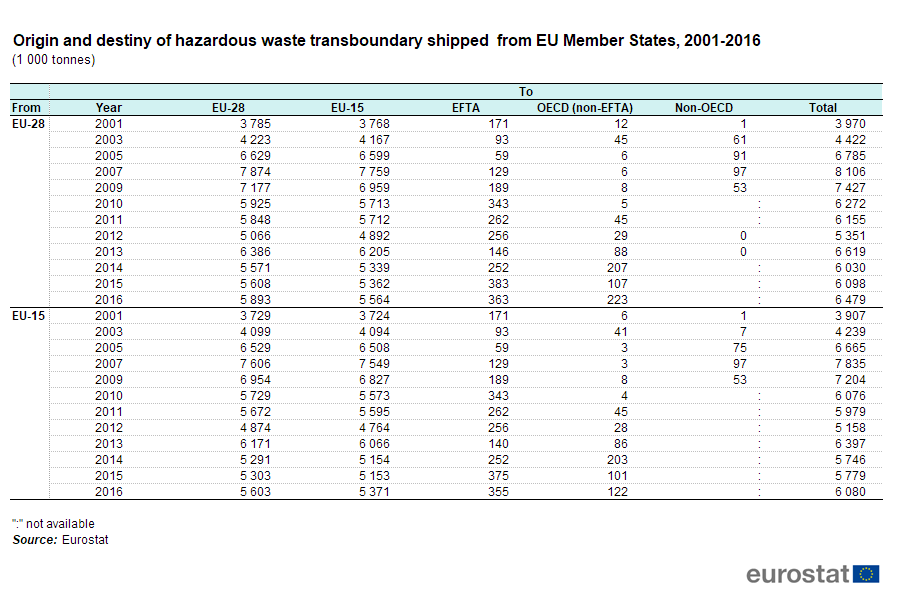 Consequently, no hazardous waste exports to non-OECD countries have been recorded since 2010.

Export of all notified waste, in tonnes

Export of all notified waste (hazardous and non-hazardous) has tripled in the EU, from 6.3 million tonnes in 2001 to 21.6 million tonnes in 2016 (cf. Table 4). In addition to hazardous waste, notified waste includes mixed household waste, residues from the incineration of household wastes and certain other waste types, which according to the WShipR must be notified before shipment. 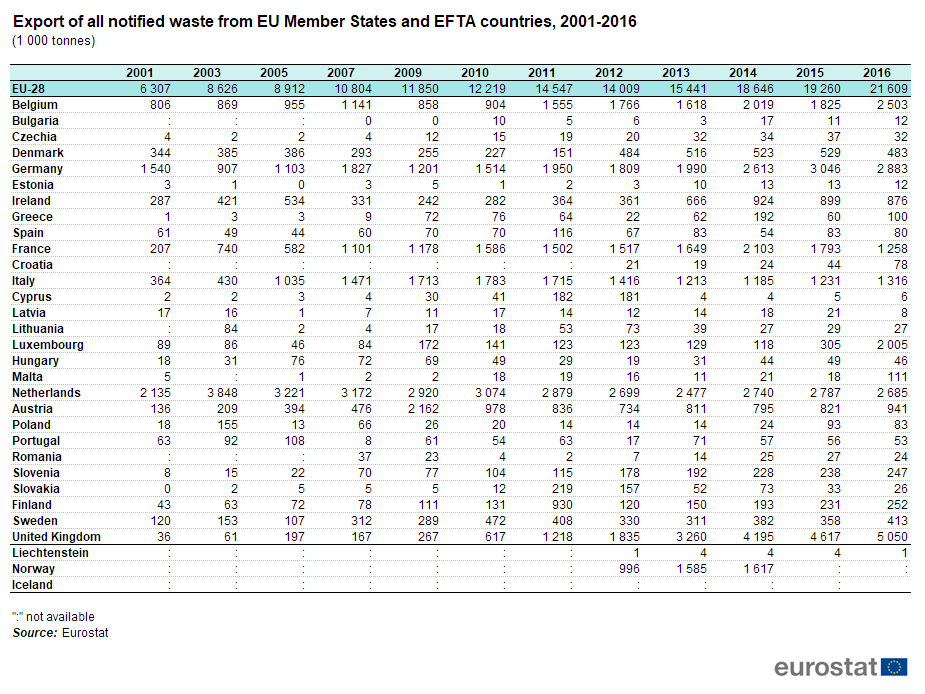 The amount of notified waste has grown quite steadily since 2005 with the exception of the crisis years 2009 and 2010. Moreover, it dropped in 2012 because Finland has re-classified iron-oxide flows to China from waste to product, and therefore no longer notifies these shipments. The largest exporters are the United Kingdom followed by Germany, the Netherlands, Belgium, Luxembourg, Italy, France, Austria and Ireland. Austria had a very large increase in 2009 mainly due to the inclusion of excavated soil from an infrastructure project in the province of Vorarlberg.

According to the WShipR, all hazardous waste as well as some problematic waste streams and other wastes defined by the WShipR, must be notified to the authorities before it is allowed to be transboundary shipped. Member States are required to submit to the Commission before the end of each calendar year a report for the previous year on the amounts of notified transboundary shipped waste and the amount of hazardous waste generated. The submitted data regarding transboundary shipments of waste covers both waste shipped out of and into the EU Member States, and the latest data covers 2007, 2008, 2009, 2010, 2011, 2012, 2013, 2014, 2015 and 2016. By July 2018, all of the Member States had reported data for 2016.