Tourists aged 65 or over accounted for nearly 1 in 4 tourism nights for private purposes by EU residents in 2018, while people aged 55+ accounted for 41 %. 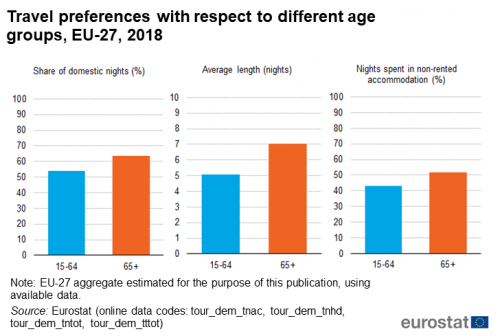 Senior tourists make longer trips, preferably in their country of residence and staying at non-rented accommodation

This article looks at the relationship between age and tourism behaviour, focusing on senior citizens. It compares the participation in tourism of EU residents aged 65 or over with younger age groups and analyses tourism preferences in terms of destination, period of travel, length of stay, type of accommodation used and expenditure habits during trips. This article was based on earlier analyses performed for the workshop of the Directorate General Growth of the European Commission ‘Towards an age-friendly tourism: Opportunities for low and medium season’ which took place in Brussels in September 2016. The data in this revised version refers to the year 2018, unless footnoted differently.

European statistics on trips made by residents cover both those for personal and professional reasons. Since this article focuses on comparing senior citizens with the rest of the population, only trips for personal purposes are considered for this publication. Figure 1 justifies this limitation of the scope in terms of purpose of the trip. It shows that only 3 % of trips made by EU residents aged 65 or over were for professional purposes, while in the other age groups business trips accounted for 13 % of all tourism trips made. 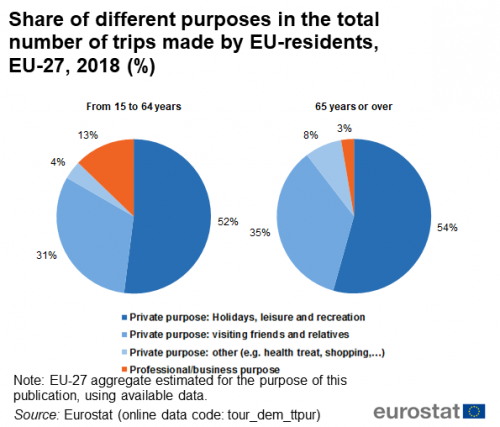 Figure 1: Share of different purposes in the total number of trips made by EU-residents, EU-27, 2018 (%)
Source: Eurostat (tour_dem_ttpur)

Within the trips for personal purposes, the share of trips for leisure, holidays and recreation was lower for senior travellers, while the category "other private/personal purposes" was higher — this category included trips relating to health treatment. No significant difference was observed between the younger and older tourists regarding trips to visit relatives and friends (see Figure 2). 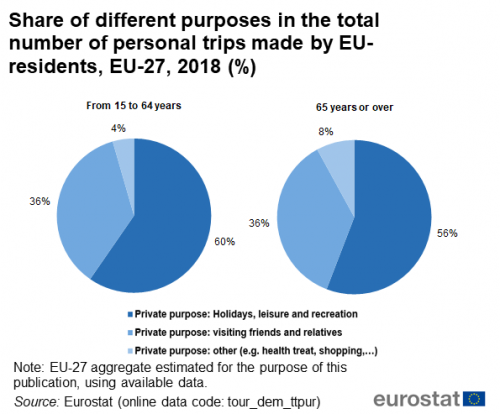 Figure 2: Share of different purposes in the total number of personal trips made by EU-residents, EU-27, 2018 (%)
Source: Eurostat (tour_dem_ttpur)

Tourists aged 65 or over accounted for nearly 1 in 4 tourism nights for private purposes spent by EU residents aged 15 or over (see Figure 3). This figure was equal to this age group’s share in the population aged 15+ (24 %). However, when looking at the broader group of tourists aged 55 or over, the gap increased by 2 % as people aged 55+ accounted for 41 % of tourism nights for private purposes while their share in the population aged 15+ was 39 %. 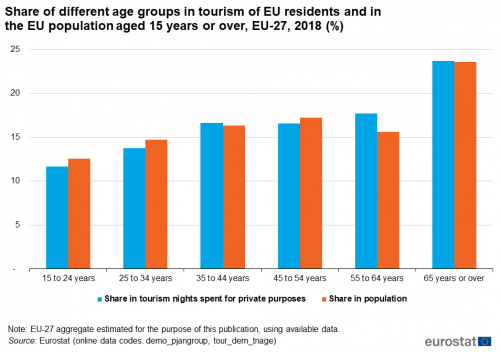 Figure 3: Share of different age groups in tourism of EU residents and in the EU population aged 15 years or over, EU-27, 2018 (%)
Source: Eurostat (tour_dem_tnage) (demo_pjangroup) 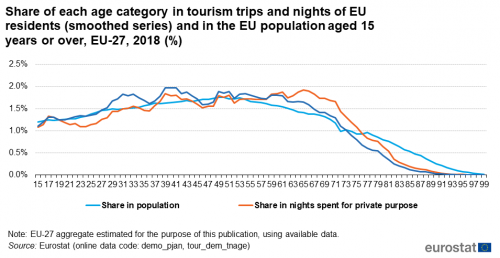 Figure 4: Share of each age category in tourism trips and nights of EU residents (smoothed series) and in the EU population aged 15 years or over, EU-27, 2018 (%)
Source: Eurostat (tour_dem_tnage) (demo_pjan) 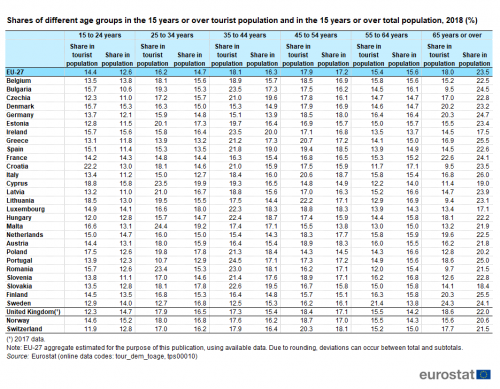 In 2018, 36 % of the European residents aged 15 and over did not participate in tourism, which means that they did not make any trip for personal purposes with at least one night away from home. Looking at age groups, more than half (51 %) of people aged 65+ did not undertake any trip (see Figure 5); this is by far the highest proportion of people not participating in tourism in any age group. Among the rest of the population (people aged 15-64), only 32 % on average did not make any trips. 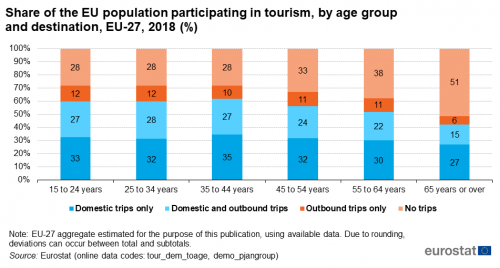 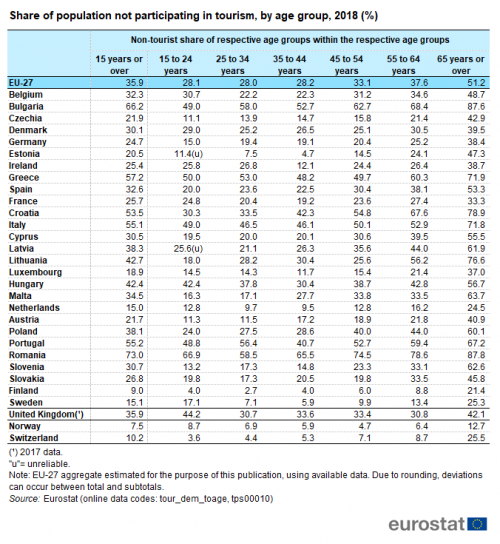 There were still major discrepancies between countries. Finland had by far the lowest general non-participation rate (only 9 % of the population aged 15+ did not engage in tourism), followed by the Netherlands and Sweden (both with 15 %). The share of older people aged 65 or over not participating in tourism was 21 % in Finland and 25 % in the Netherlands and in Sweden. It should be mentioned here that Norway had even lower shares, with only 7 % of the population 15+ and 13% of people aged 65+ not participating in tourism.

On the other hand, Romania had the highest general non-participation rate (73 % of the population aged 15+), followed by Bulgaria (66 %), while the share of people aged 65+ not making any trips was in both countries 88 %.

Data on reasons for not participating in tourism is transmitted to Eurostat every three years. In this article we present data for the reference year 2016.

Tourists aged 65+ had very different reasons not to travel compared with other age groups. 46 % gave health as one of the main reasons, and this was the most frequently cited reason (see Figure 6). However, among the rest of the population (tourists aged 15 to 64), only 10 % cited health.

Furthermore, 30 % of tourists aged 65+ showed no interest in travelling, almost double the proportion in other age groups (in the 15-64 age group, this figure was 18 %).

More than half (53 %) of the Europeans aged 15-64 who did not make tourism trips mentioned financial reasons, while only one out of three (34 %) persons aged 65+ cited financial considerations as a reason for not travelling.

This disparity was mirrored at national level. In Table 3, the main reason for not travelling is highlighted for each country and for each age group (15-64 and 65+). Looking at the 15-64 age group, in 22 of the 27 EU Member States, financial reasons were mentioned most frequently. Among people aged 65+, health reasons were the most commonly stated reason in 20 out of the 27 Member States. 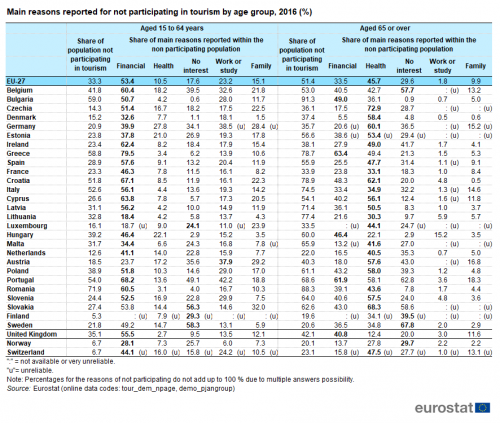 Figure 7 shows that younger people tend to travel during school holidays and were therefore over represented in the summer season, while older people travelled more in the ‘shoulder season’, i.e. the travel period between peak and off-peak seasons, with a less pronounced summer peak. The difference between 65+ and the younger age groups was most pronounced just before summer (May, June) or early autumn (September, October), meaning older tourists are extending the peak tourism season. 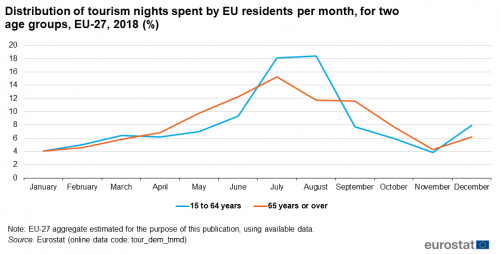 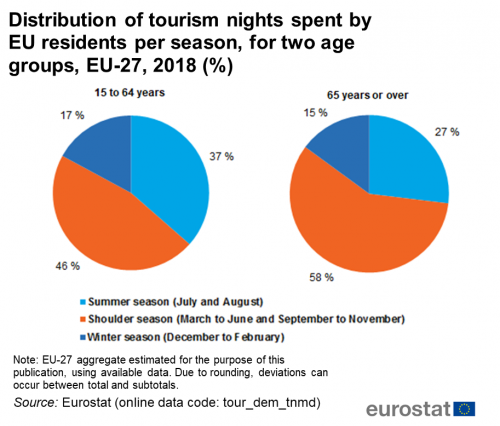 EU residents aged 65+ made on average longer trips than people aged 15-64, with the exception of Cyprus, Lithuania and Romania. Furthermore, the older age group spent more nights in non-rented accommodation when compared to the younger age groups except for Germany, Austria and Sweden. 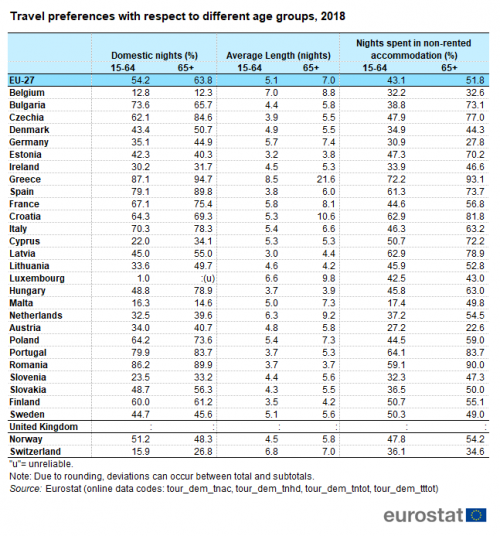 On average, i.e. regardless of the type of the trip, tourists aged 65+ spent less. Figure 10 shows that people aged 65+ accounted for nearly 1 in every 4 nights spent (24 %), but their share of tourism expenditure was just above €1 of every €5 spent (21 %). This can partially be explained by the travel habits of older tourists outlined in the previous paragraph. 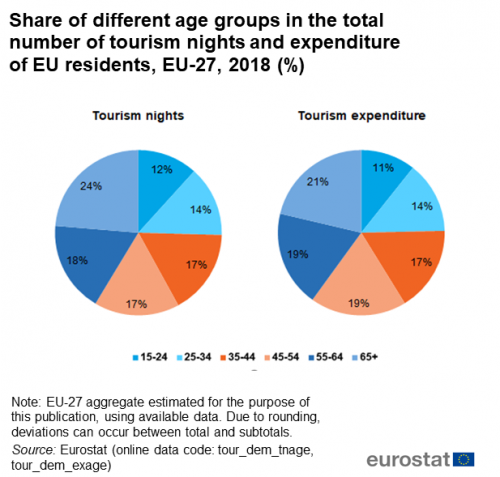 Figures 11a to 11d look at groups of trips that are similar in nature in order to reduce the structural effects of the trip's characteristics. In other words: do senior tourists show different expenditure when considering comparable types of trips?

Figure 11a shows the overall difference regardless of the type of trip: on average older residents spent less all year round (-12%). However, when taking into account the observations on the travel preferences highlighted above (see Figure 8) and looking at the differences in spending between age groups for similar types of trips, the effect is far less pronounced. 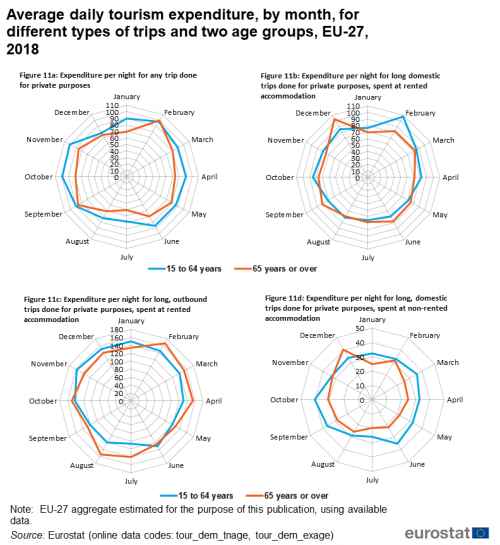 Figures 11b to 11d show the difference in expenditure for the three most popular types of trips that accounted for more than two thirds of all nights spent made by EU residents. During long domestic trips (Figure 11b) and long trips abroad (Figure 11c) spent in rented accommodation, the average daily expenditure of persons aged 65+ was higher than the daily expenditure of people aged 15-64 for comparable trips (differences of +2% and +9% respectively).

However, when looking at long domestic trips spent in non-rented accommodation, Figure 11d shows that the average daily expenditure of people aged 65+ was 18 % lower than that of people aged 15-64.