Highlights
Tweet
Spain and Italy were for EU residents the top foreign destinations in 2018.
Tweet
The United Kingdom, the USA and Switzerland were the top 3 tourist destinations outside the EU in 2018.

Destinations for outbound trips made by EU residents within the EU, in terms of nights spent, EU-27, 2018

This article is part of the Eurostat online publication Tourism trips of Europeans, providing recent statistics on tourism demand in the European Union (EU) and EFTA countries. The article takes a closer look at the destinations chosen by the residents of those countries for their trips in 2018.

In 2018, residents of the European Union (EU-27) made 1 134 million trips (for personal or professional purpose) and spent 5 882 million nights during those trips (see Table 1). Tourist expenditure amounted to EUR 516 713 million.

Seven out of ten trips (70.5 %) were domestic trips – i.e. trips in the tourist's own country of residence – but in terms of nights spent and expenditure, domestic trips accounted for 56.2 % and 40.0 % of the total respectively. For most EU countries, the domestic market was dominant; only for Belgium, Luxembourg, Malta and Slovenia this was not the case (see Tables 2 to 5). Belgian and Luxembourgish tourists made more outbound trips to one single foreign country (France) than those made inside their own country.

Spain and Italy - top foreign destinations for EU residents in 2018 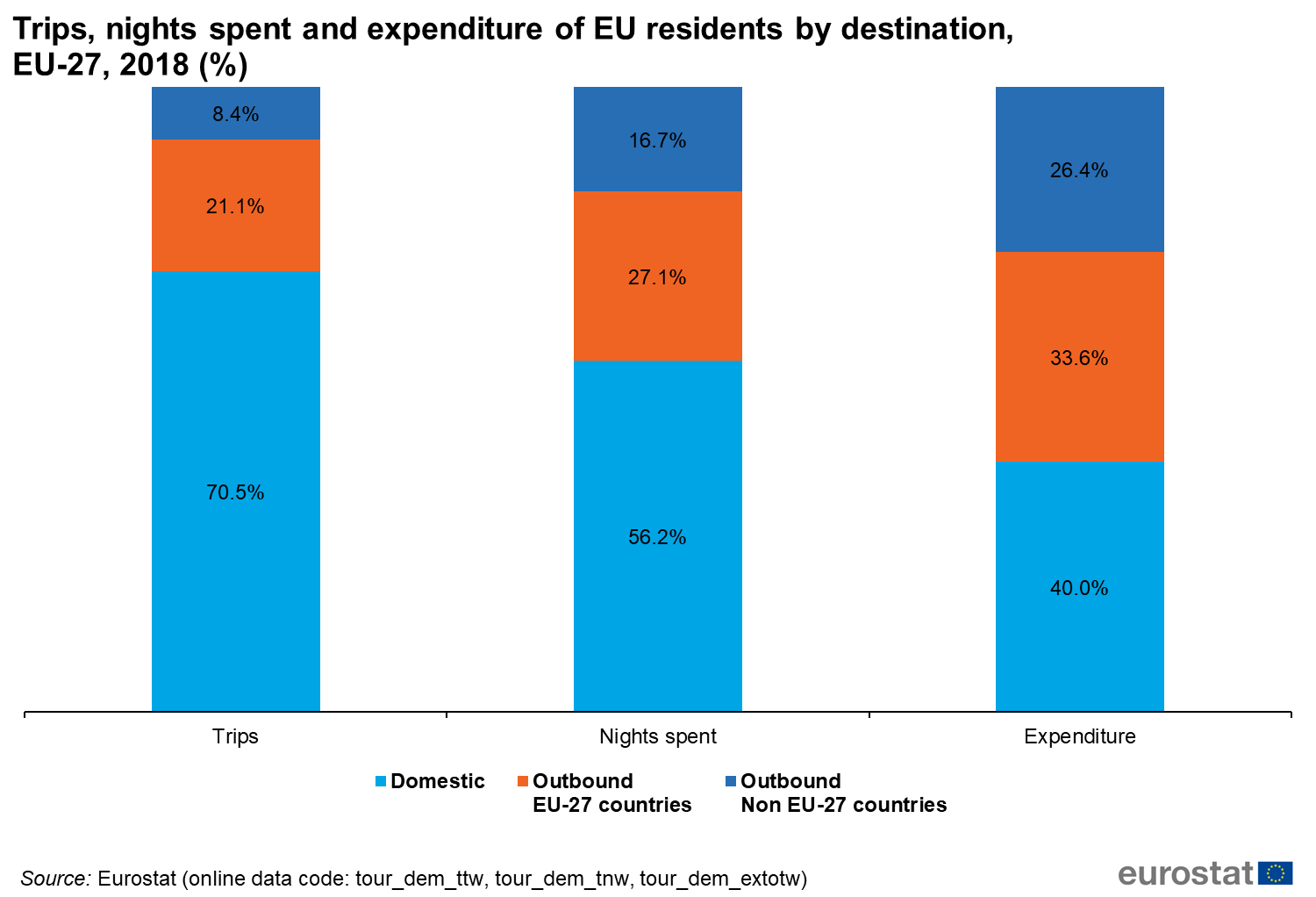 A neighbouring or nearby country was the preferred foreign destination for trips of nearly all the European tourists. However, this was not the case for tourists from Denmark, Romania and Sweden for whom Italy or Spain was the top foreign destination. In terms of duration and expenditure, the proximity of the destination became less dominant: further away destinations - also outside Europe - took a bigger share.

More than seven out of ten (71.8 %) outbound trips of Europeans were spent inside the EU (see Figure 2). In terms of nights spent, this represents more than six out of ten outbound tourism nights (61.9 %). The three top EU destinations (Spain, Italy and France) accounted for 44.3 % of these nights (see Figure 3). These trips are dealt with in more detail in the article "Intra-EU tourism flows". 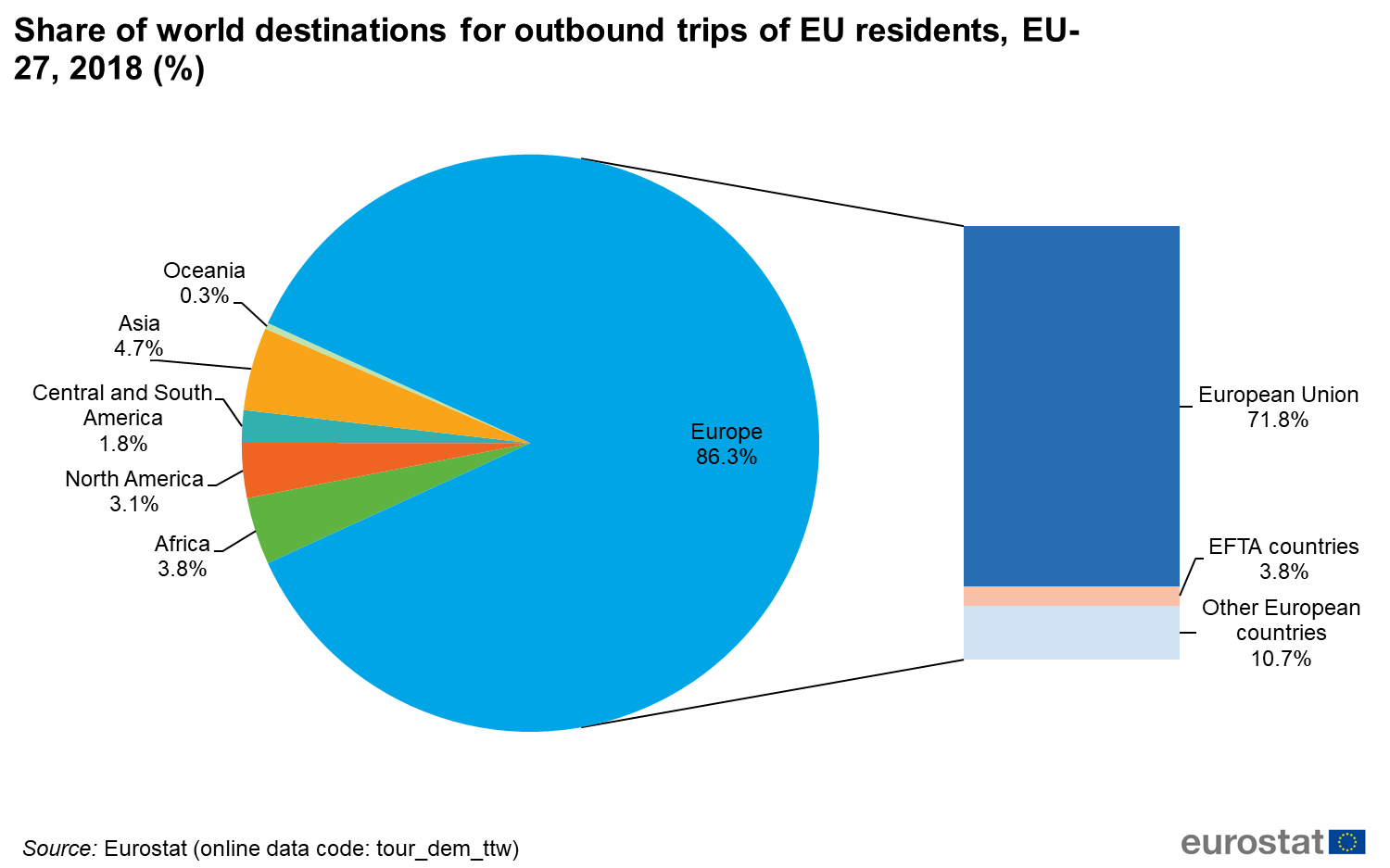 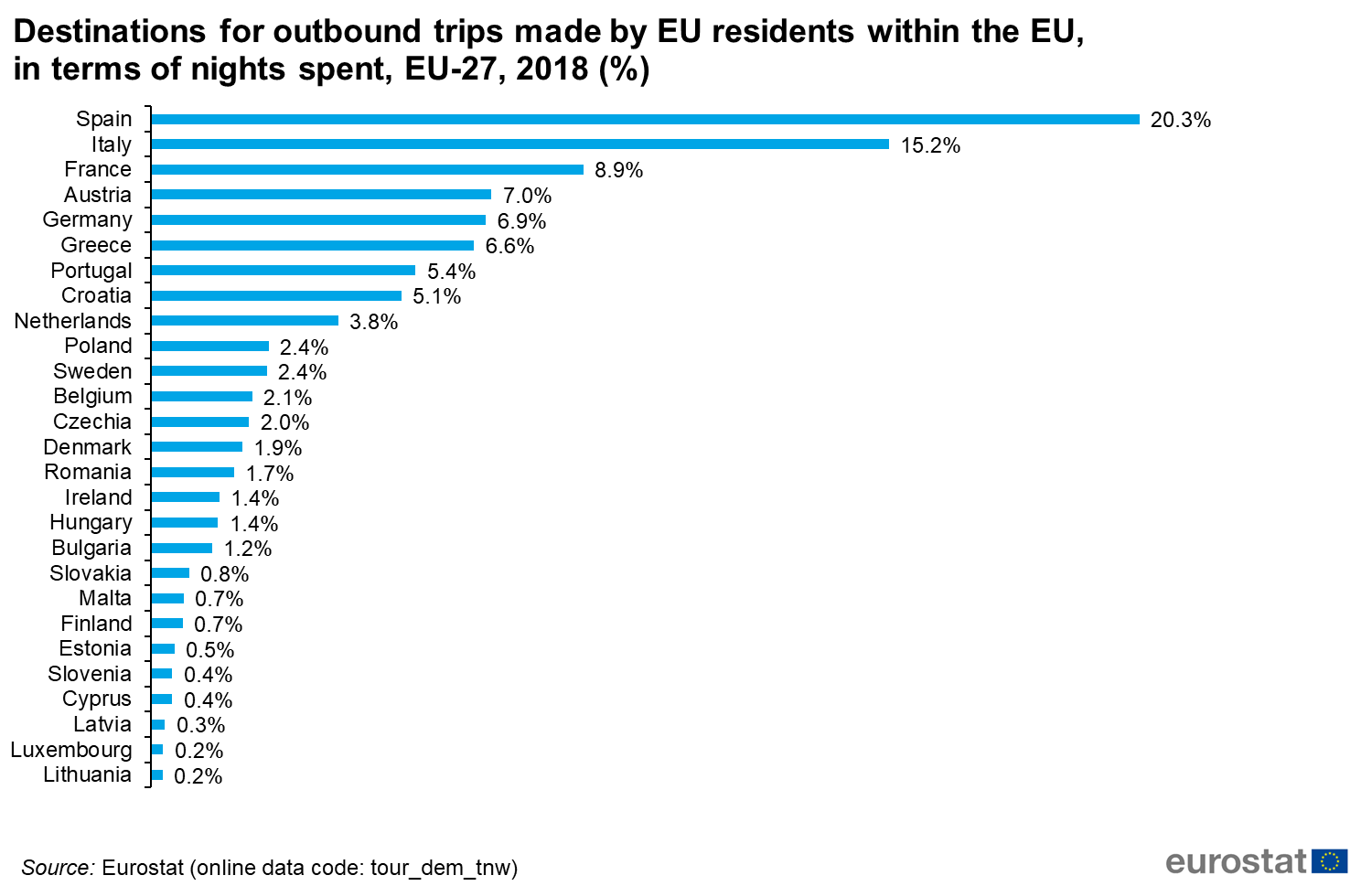 Figure 3: Destinations for outbound trips made by EU residents within the EU, in terms of nights spent, EU-27, 2018 (%) - Source: Eurostat (tour_dem_tnw)

United Kingdom, USA and Switzerland - top 3 destinations outside the EU

Destinations outside the European continent made up only 13.7 % of all outbound trips (see Figure 2): 4.9 % to America, 4.7 % to Asia and 3.8 % to Africa. Only 0.3 % of trips had Oceania as a destination. Often, these intercontinental flows were dominated by a few generating countries. Behind the average at EU level, big differences were observed; at least one in five outbound trips made by French or Portuguese tourists had a destination outside Europe while less than 5 % of Bulgarian, Croatian, Hungarian, Romanian or Slovenian trips were to another continent.

The United Kingdom, the United States and Switzerland were the top 3 destinations in terms of number of trips made by Europeans outside the EU in 2018 (see Figure 4). 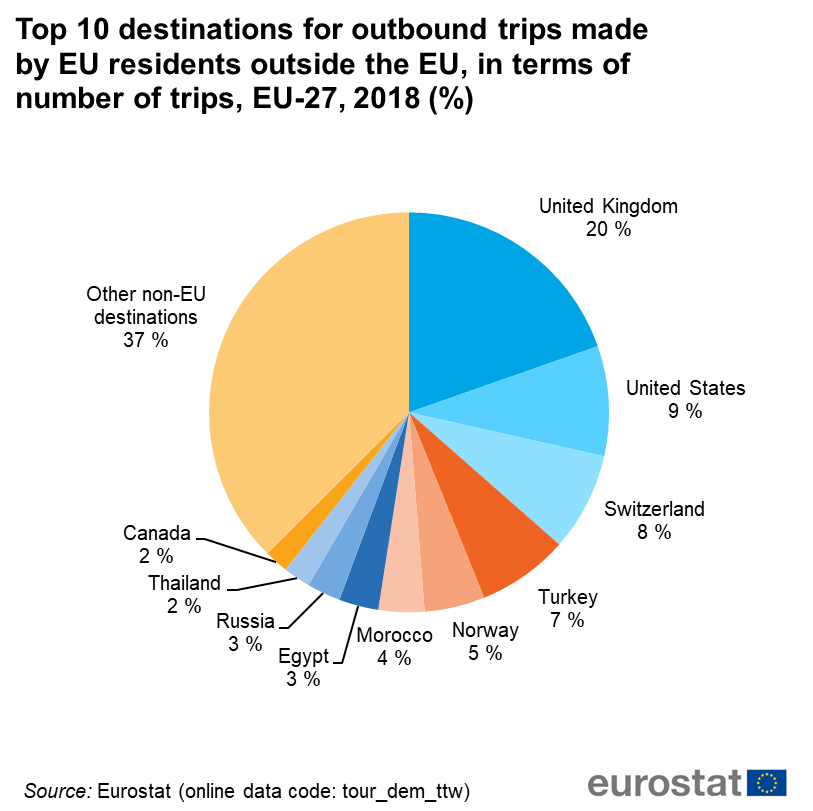 Tables 2 to 5 present a detailed overview per country, for convenience of presentation split into four geographical zones. In most cases, the choice of destination may be determined by proximity and/or relative attractiveness (e.g. in terms of climate). However, historical migrant flows, former colonial ties or language may also influence the choice of destination, for instance United Kingdom for residents of Cyprus and Malta, Portugal for the Luxembourgish residents or India for United Kingdom residents. 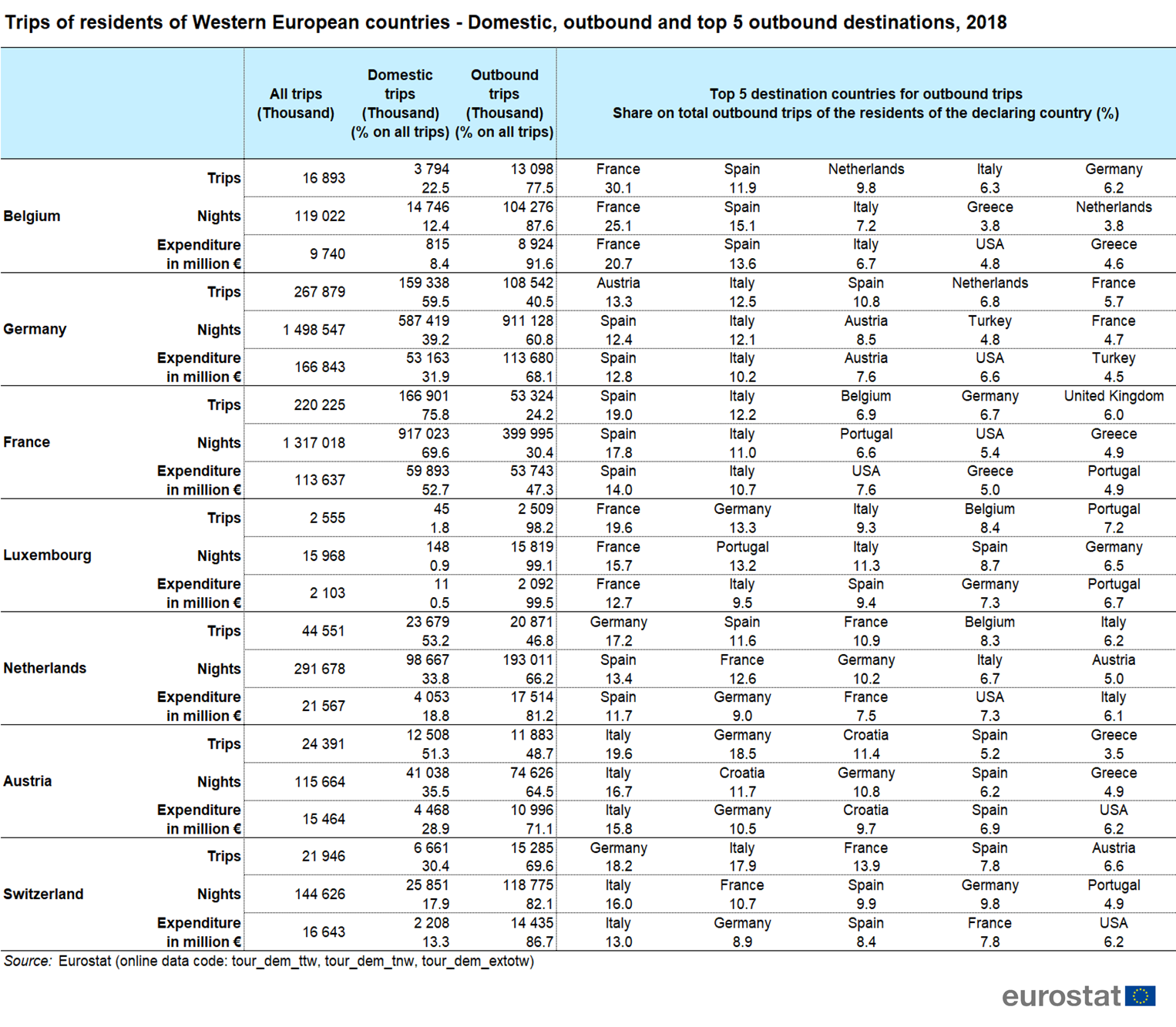 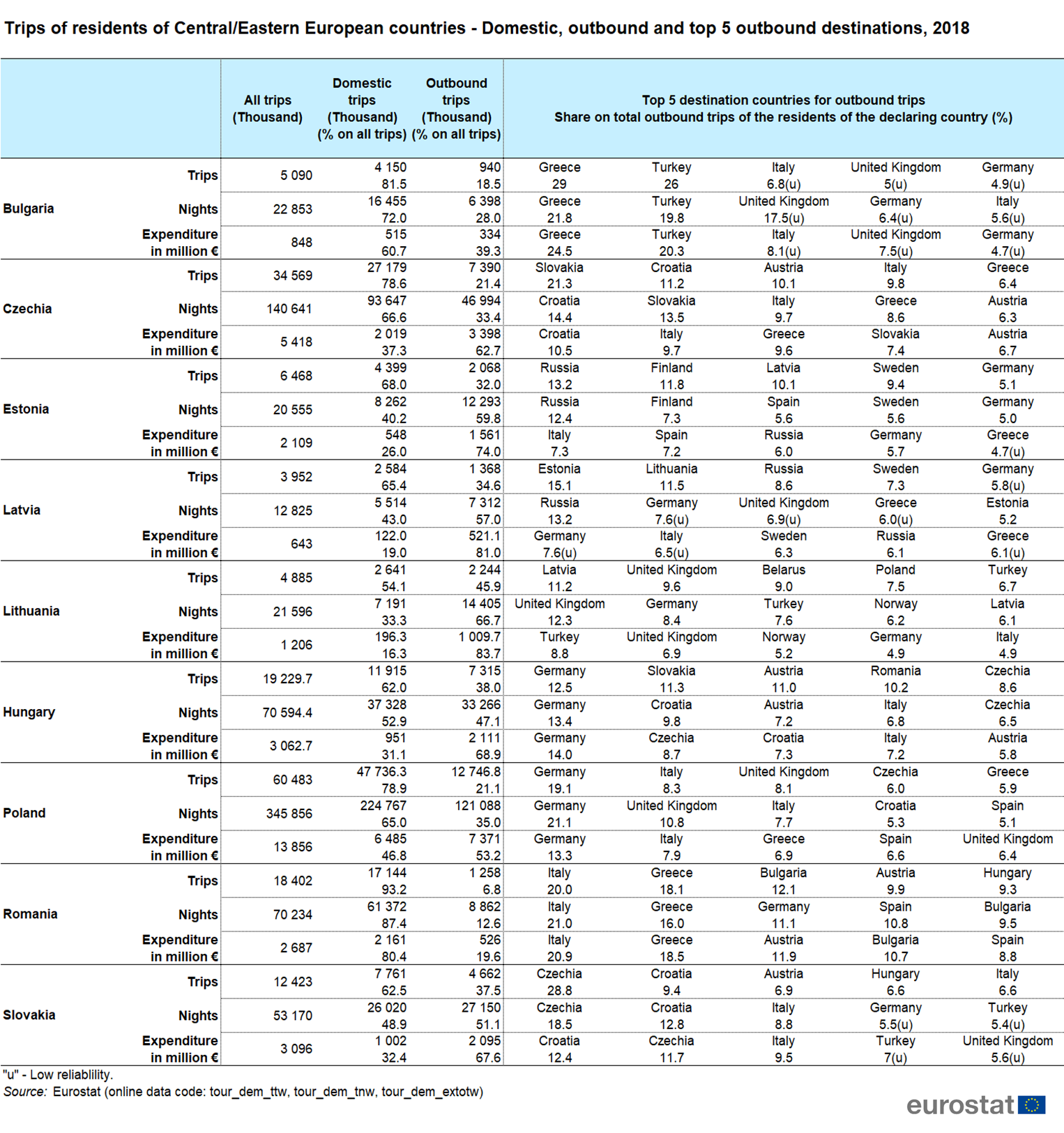 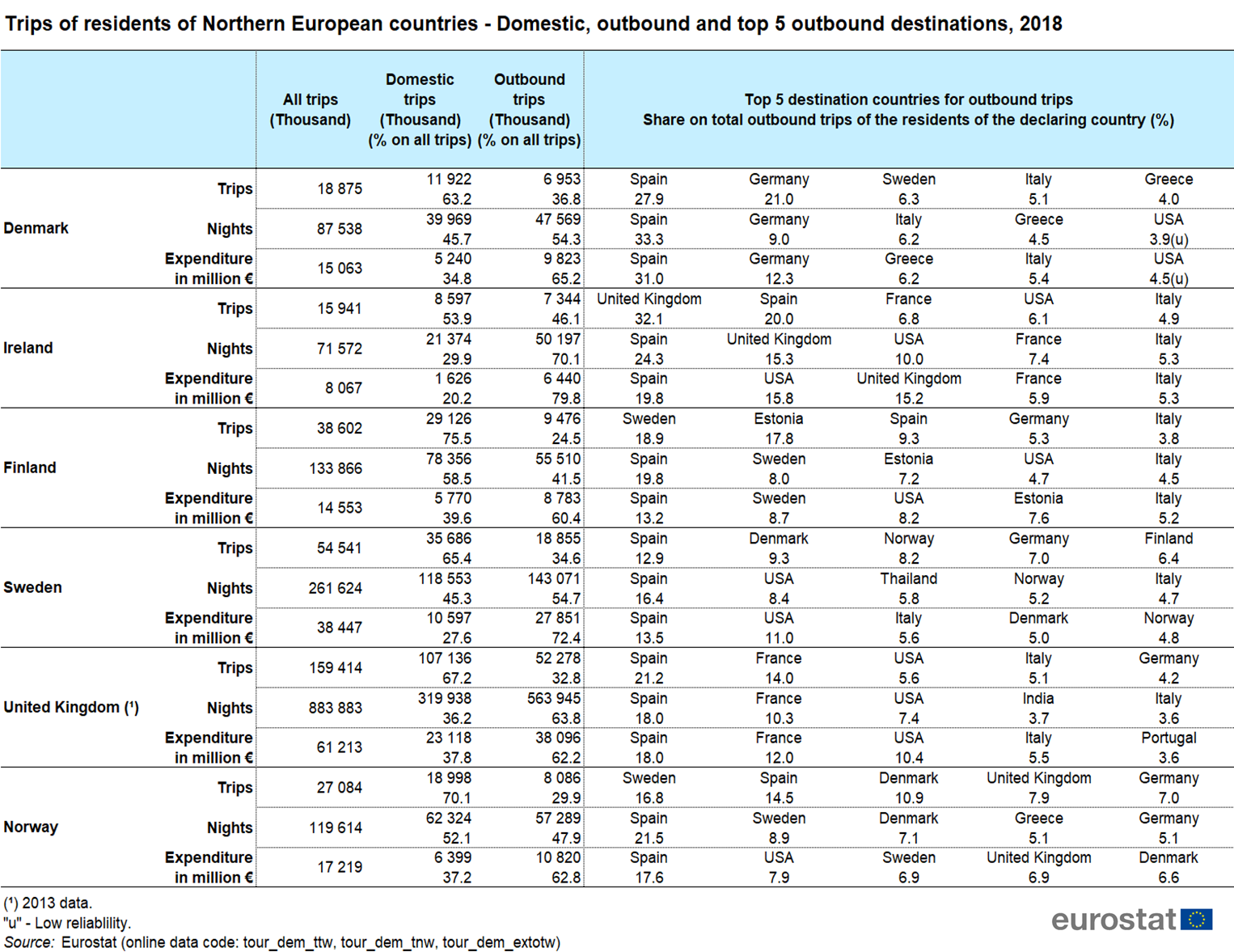 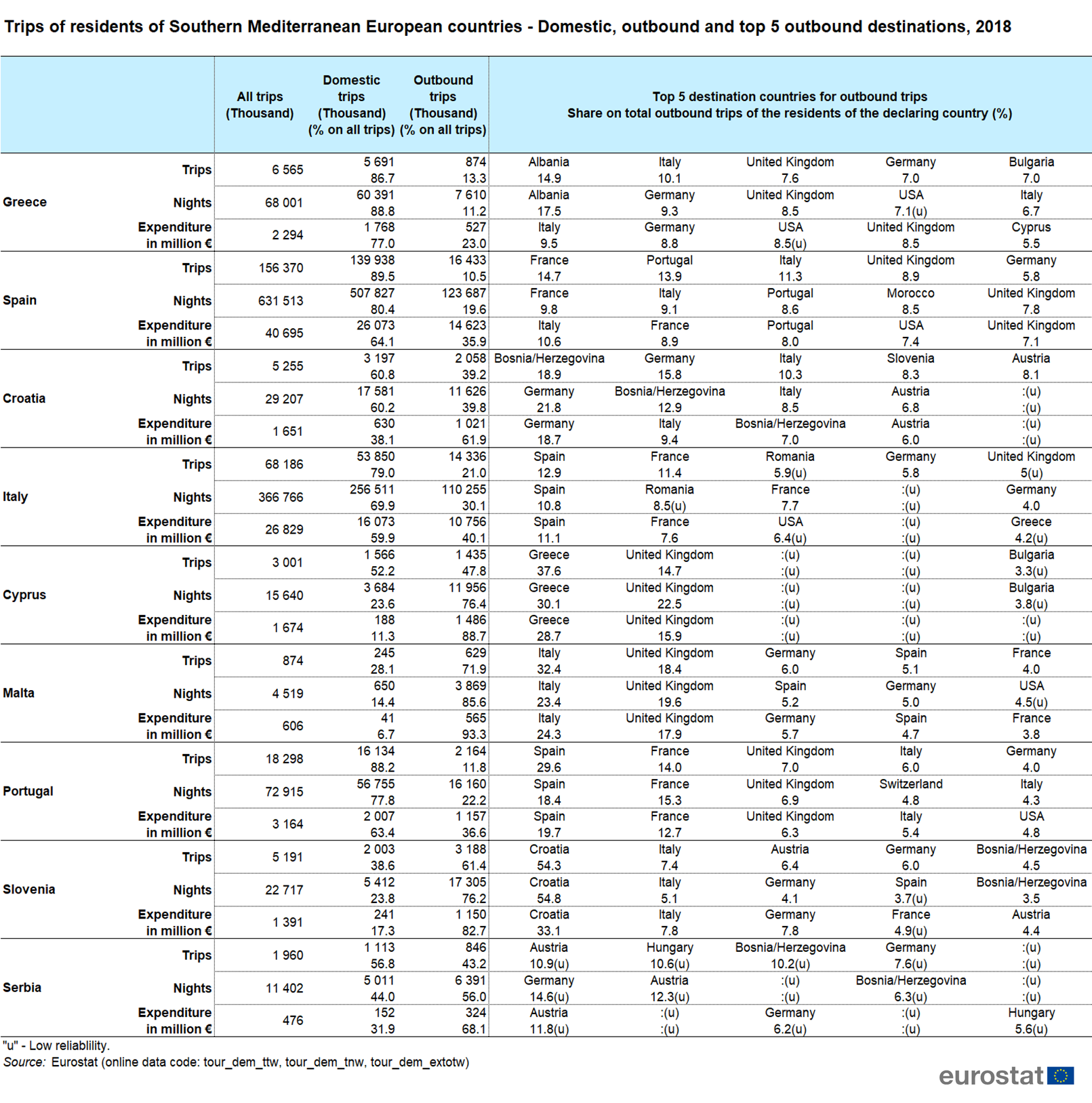