There were 1.7 million students from abroad who were undertaking tertiary level studies across the EU-28 in 2017. 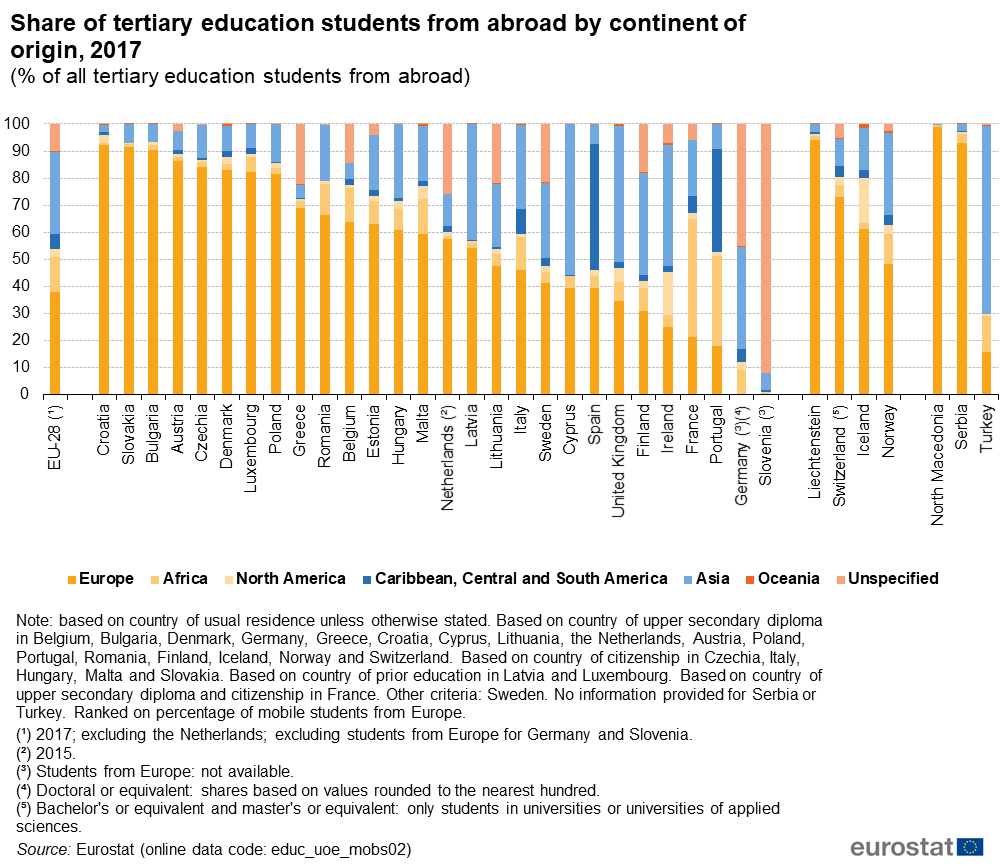 This article presents statistics on the mobility of tertiary education students in the European Union (EU) and forms part of an online publication on education and training in the EU. It focuses on tertiary education students who are internationally mobile. In theory, this concerns students who completed their secondary education somewhere other than the EU Member State where they are studying (regardless of whether this was in another EU Member State or in a non-member country); in practice, a number of different criteria are used, notably the country of usual or previous residence, or citizenship. The first part of the analysis focuses on tertiary students, the second part on tertiary graduates, followed by an analysis comparing the number of students with the number of graduates. The article concludes with a brief presentation of data on credit mobile graduates, in other words, students who are temporarily abroad (for study or work placement) for the purpose (usually) of gaining academic credit within the framework of enrolment in a tertiary education programme at a home institution.

There were 1.71 million students from abroad who were undertaking tertiary level studies across the EU-28 in 2017: in other words, foreign students studying in a country other than that where they completed their secondary education. As is the case for all students, not just those from abroad, the highest shares of these students were studying for either a bachelor’s degree (45.6 %) or a master’s degree (41.9 %), while 9.3 % were studying for doctoral degrees and 3.1 % followed short-cycle tertiary courses.

In 2017, the highest shares of students from abroad studying for short-cycle tertiary courses were recorded in Cyprus and Denmark, with their shares 48.9 % and 14.6 % respectively. More than one quarter of all students studying for bachelor’s degrees in Cyprus (28.0 %) and Luxembourg (25.8 %) were from abroad, while Austria (18.9 %), the United Kingdom (14.4 %) and Czechia (11.1 %) were the only other EU Member States where more than 1 in 10 students at this level were from abroad. Around three quarters (75.8 %) of master’s students in Luxembourg were from abroad, as were more than one third (33.9 %) in the United Kingdom and around one fifth in Austria, Ireland and Denmark; there were 15 further Member States that reported double digit shares of students from abroad at this level. For doctoral students, Luxembourg again reported the highest share (85.2 %), followed by the Netherlands (43.1 %), the United Kingdom (42.1 %), France (39.7 %), Denmark (35.2 %) and Sweden (35.1 %). By contrast, less than 5.0 % of all doctoral students in Lithuania, Romania, Poland and Greece were from abroad. 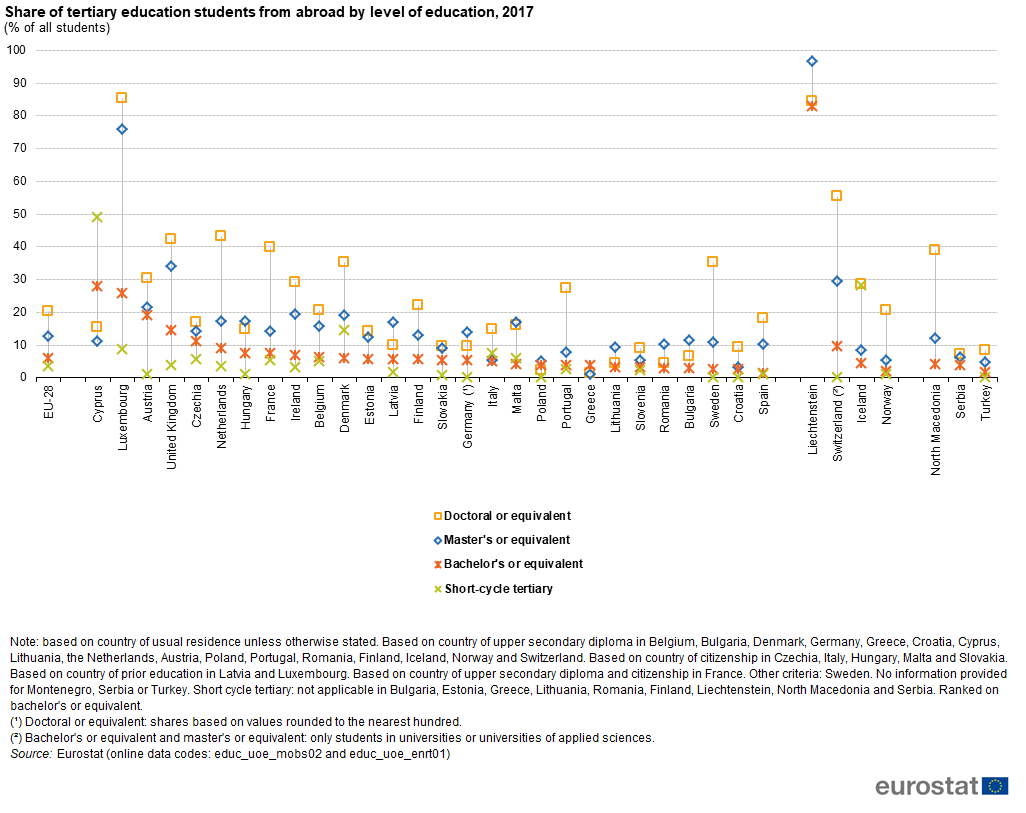 Figure 1: Share of tertiary education students from abroad by level of education, 2017
(% of all students)
Source: Eurostat (educ_uoe_mobs02) and (educ_uoe_enrt01)

Origin of students from abroad

For several of the EU Member States, the distribution by continent of their tertiary education students from abroad reflects a common language, cultural or historical ties, for example with countries that were formerly colonies. This may be balanced against the fact that many students who study abroad do so in neighbouring (European) countries, and so the share of students from Europe in some of the EU Member States is often very high. Indeed, for 16 of the Member States for which data are available (incomplete data for Germany and Slovenia), a majority of students from abroad in 2017 were from elsewhere in Europe, with this share exceeding 90.0 % in Bulgaria, Slovakia and Croatia (where a peak of 92.3 % was recorded), while the proportion of tertiary students from elsewhere in Europe was close to one quarter (25.1&nbsp:%) of the total in Ireland, one fifth (21.5 %) in France and reached a low of 17.8 % in Portugal.

Across the whole of the EU, China (including Hong Kong) was the most common country of origin for tertiary students from abroad in 2017, accounting for 11.2 % of the total. There were more students from China (than any other foreign country) studying in Germany (excluding doctoral studies), Ireland, Italy and the United Kingdom, while Chinese students accounted for the second largest population of foreign students within the tertiary education sectors of France, the Netherlands, Finland and Sweden. Alongside the neighbouring countries of Albania, Belarus, Bosnia and Herzegovina, Russia, Serbia and Ukraine, the only other non-member country that appeared multiple times in the rankings was India. 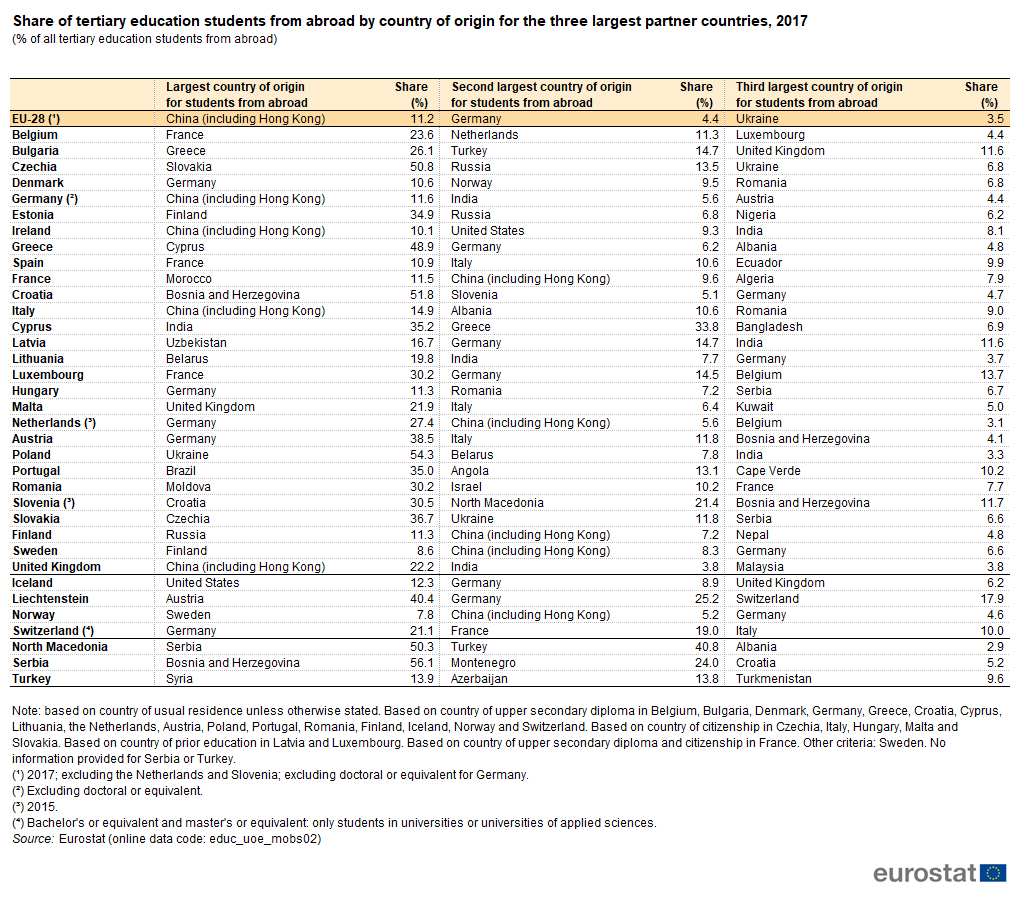 Field of education for students from abroad 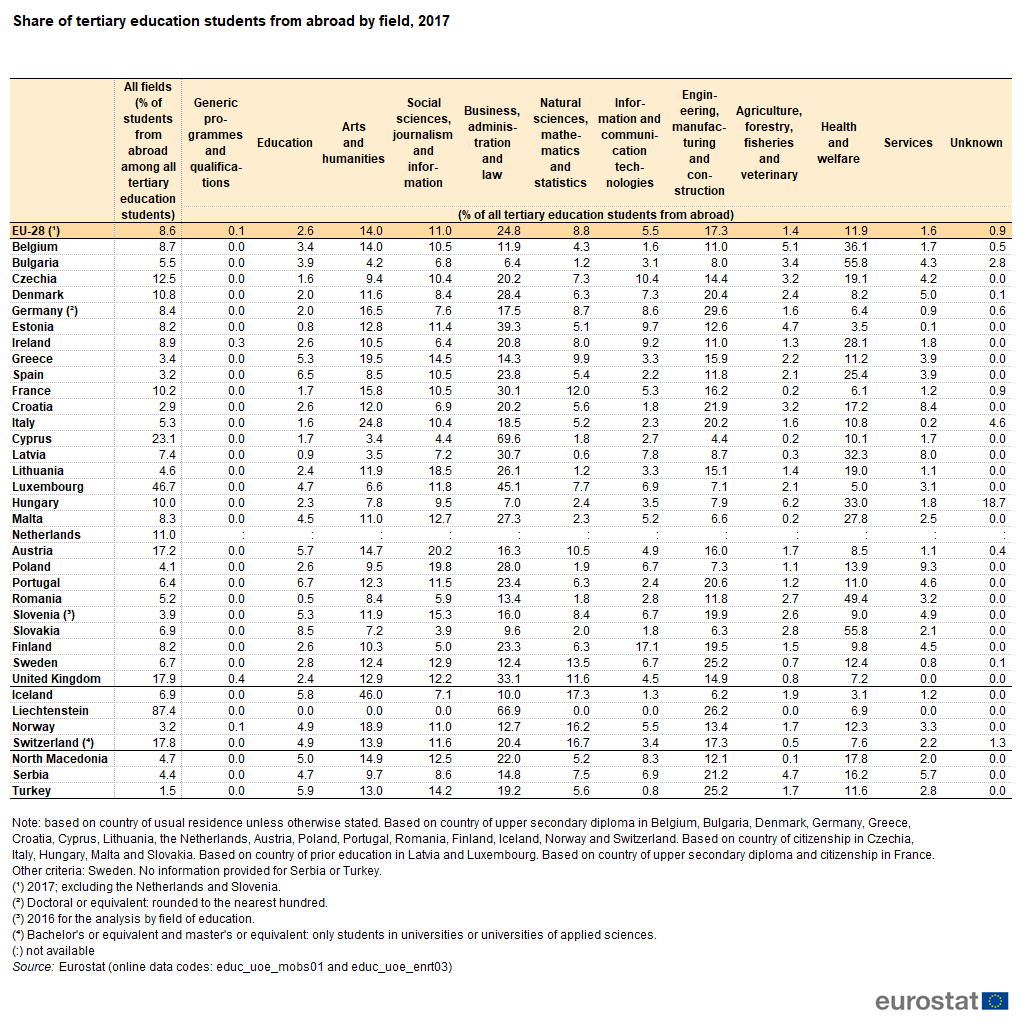 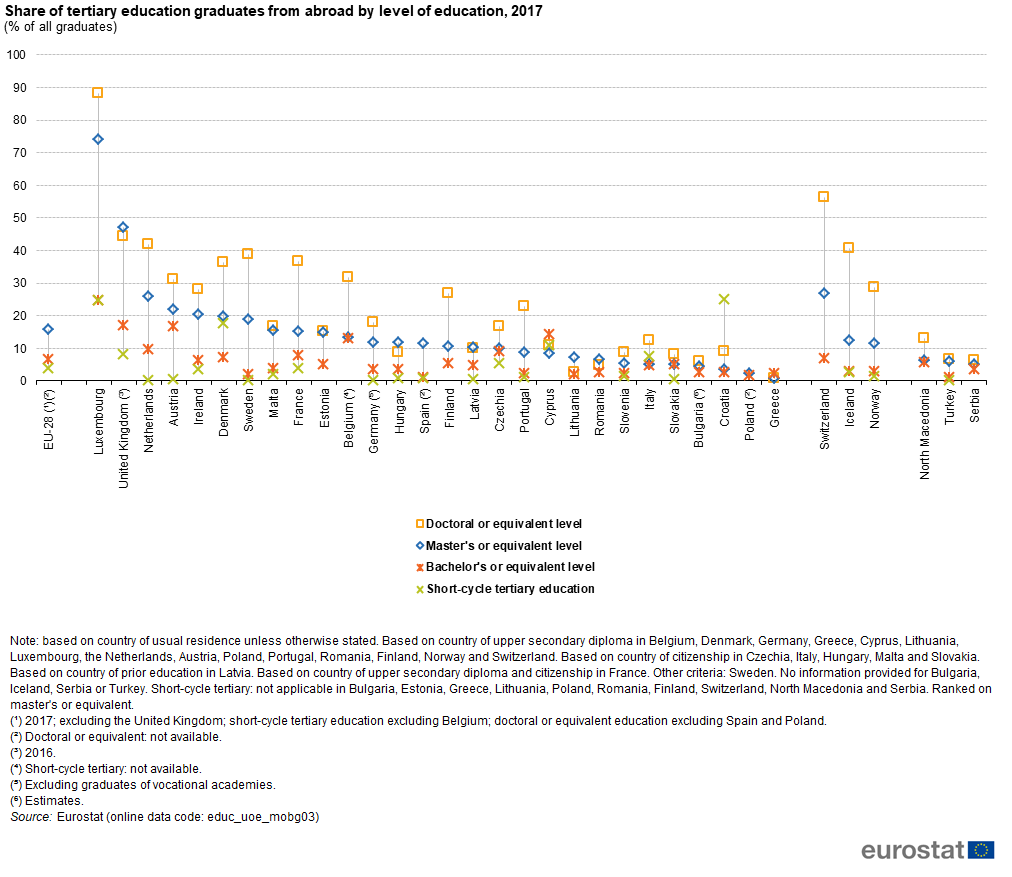 Figure 3: Share of tertiary education graduates from abroad by level of education, 2017
(% of all graduates)
Source: Eurostat (educ_uoe_mobg03)

Origin of graduates from abroad 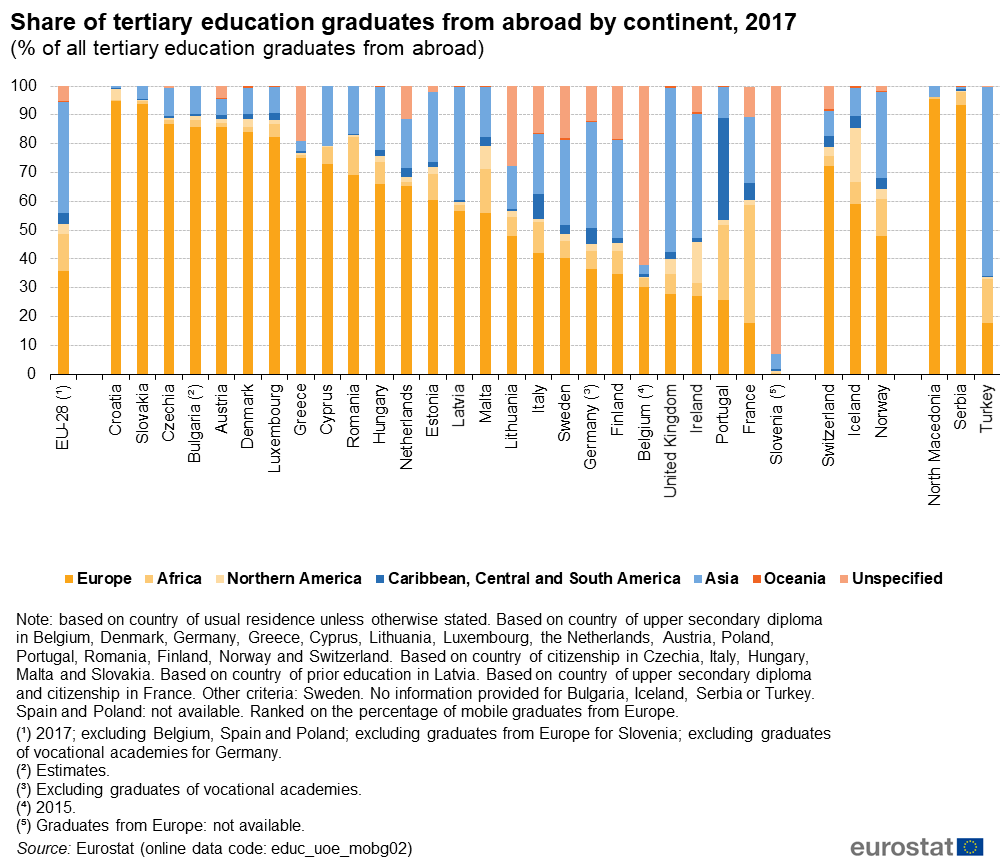 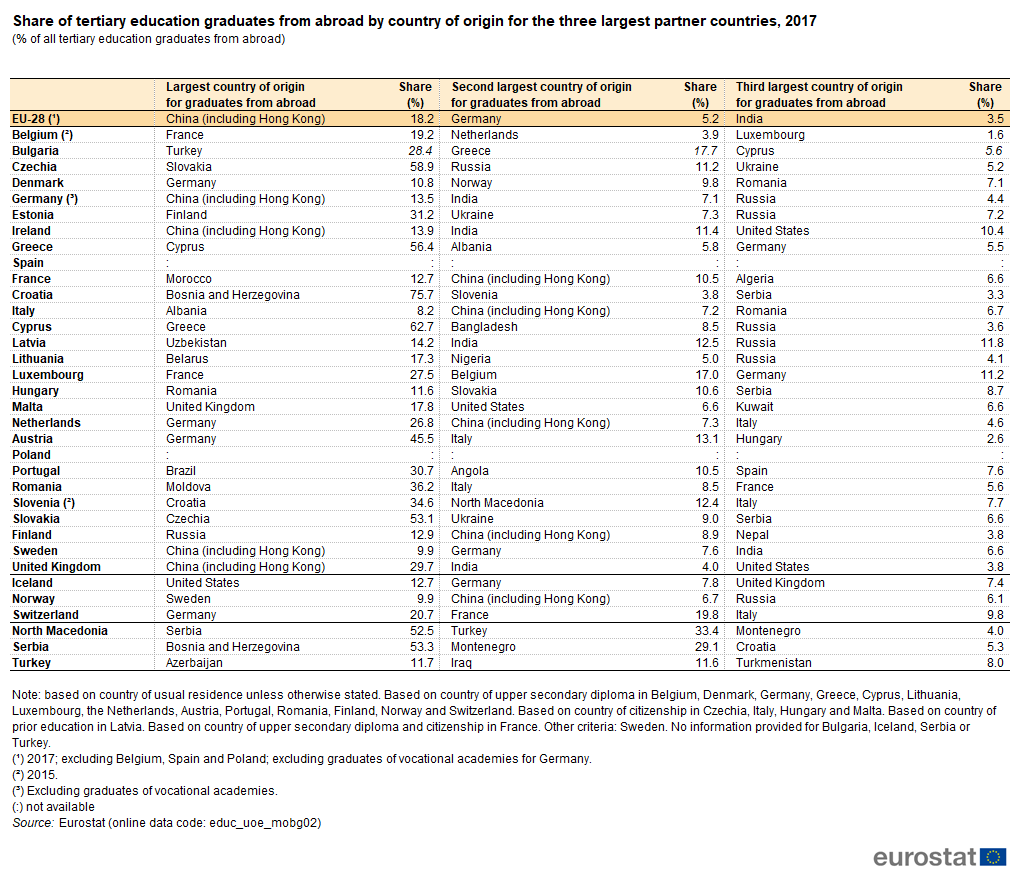 Field of study for graduates from abroad 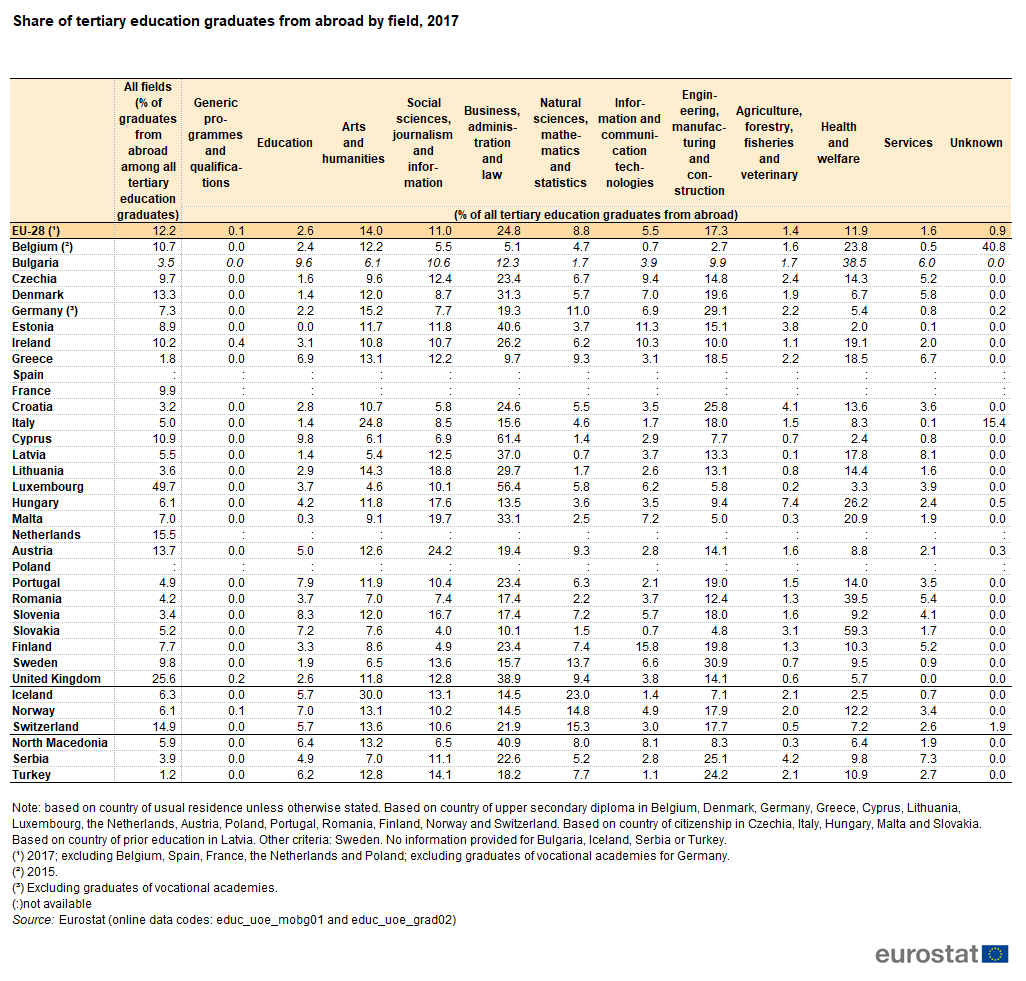 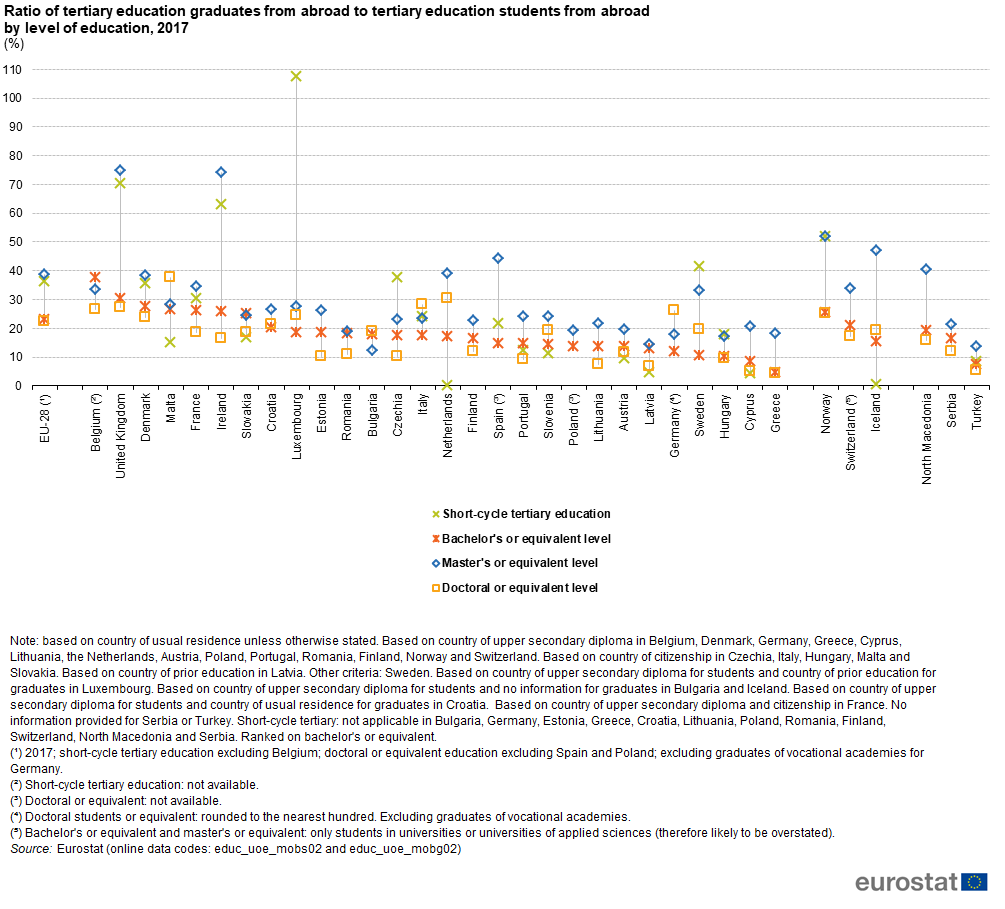 Based on available information (as shown in Figure 5), the ratio of graduates from abroad to students from abroad for short-cycle degrees in the EU (based on those EU Member States for which data are available) was 36.4 % in 2017, while the ratio for master’s degree courses was slightly higher, at 38.8 %; both of these ratios are relatively high, reflecting the short length of most courses (especially for master’s degrees if these are taken after having already obtained a bachelor’s degree). Considerably lower ratios were recorded for doctoral degrees (22.2 %) and for bachelor’s degrees (23.0 %), where it is typical for students to spend at least three years studying or researching before they graduate. 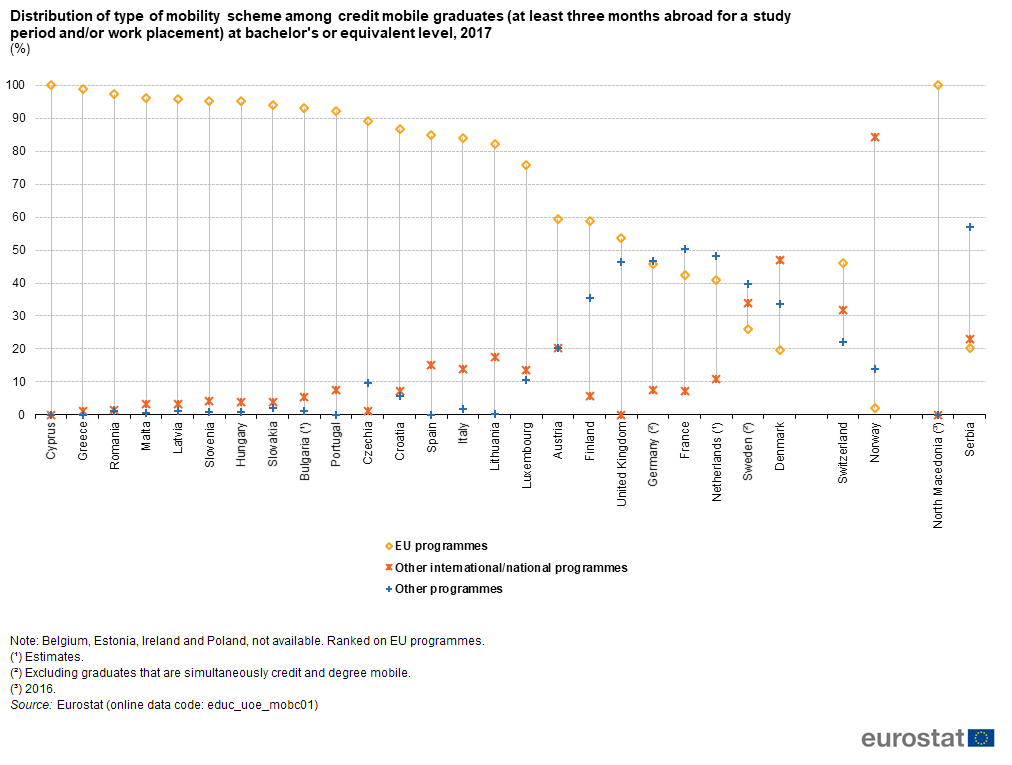 Eurostat data by fields of education are classified according to the ISCED-F 2013 classification; this classification has been used for Eurostat data from reference year 2016 onwards (and is therefore the basis for the information presented within this article). The fields of education — as classified by ISCED-F 2013 — are broad domains, branches or areas of content covered by an education programme or qualification. The classification was designed principally to describe and categorise fields of education and training at the secondary, post-secondary and tertiary levels of formal education. It has a three-level hierarchy based on broad fields (the highest level), narrow fields (the second level) and detailed fields (the third level) of education. The 11 broad fields include: generic programmes and qualifications; education; arts and humanities; business, administration and law; natural sciences, mathematics and statistics; information and communication technologies; engineering, manufacturing and construction; agriculture, forestry, fisheries and veterinary; health and welfare; and services.

The UOE data collection covers domestic educational activity, in other words education provided within a country’s own territory regardless of ownership or sponsorship of the institutions concerned (whether public or private, national or foreign) or of the education delivery mechanism (whether face-to-face or at a distance). In particular, all students studying within a country, including internationally mobile students from abroad, should be included in the statistics of the reporting country. Students who have left the reporting country to study abroad should not be included by the reporting country even where such students are partially or fully-funded by national or subnational authorities. Concerning short exchange programmes (of at least three months but shorter than one academic year), students who remain enrolled in their home institution and where credits for successful completion of the study abroad are awarded by the home institution should be reported by the country of the home institution in which they are enrolled.

By contrast, educational activities which take place abroad — for example, in institutions run by providers located in the reporting country — should be excluded.

The Bologna process put in motion a series of reforms to make European higher education more compatible, comparable, competitive and attractive for students. One of the operational goals of the Bologna process was to remove obstacles to student mobility across Europe, and more broadly support the mobility of students, teachers and researchers. It established a European Higher Education Area to facilitate student and staff mobility, to make higher education more inclusive and accessible, and to make higher education in Europe more attractive and competitive worldwide.

The strategic framework for European cooperation in education and training (known as ET 2020), was adopted by the Council in May 2009. It set out four strategic objectives for education and training in the EU including making mobility a reality. Two benchmarks on learning mobility were adopted by the Council in November 2011, supplementing a set of benchmarks laid down in ET 2020:

The Erasmus programme was one of the most well-known European programmes and ran for just over a quarter of a century; in 2014 it was superseded by the EU’s programme for education, training, youth and sport, referred to as Erasmus+. In the field of higher education, Erasmus+ gives students and academic staff the opportunity to develop their skills and boost their employment prospects. Students can study abroad for up to 12 months (during each cycle of tertiary education). During the period between 2014 and 2020, some four million people are expected to benefit from Erasmus+, including around: two million higher education students (including 25 thousand students on joint masters’ programmes); 650 thousand vocational training and education students; 800 thousand lecturers, teachers, trainers, education staff and youth workers.