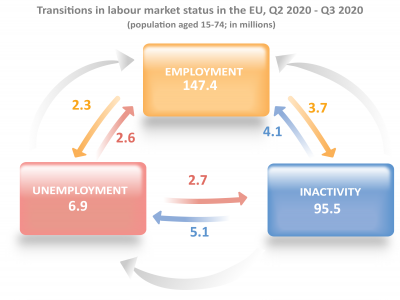 Out of all those persons in the European Union (EU) who were unemployed in the second quarter of 2020, 56.5 % (6.9 million persons) remained unemployed in the third quarter of 2020, while 21.1 % (2.6 million) moved into employment and 22.4 % (2.7 million) towards economic inactivity. Of all those initially in employment, 96.1 % (147.4 million persons) remained in employment, while 1.5 % (2.3 million) of those employed in the second quarter of 2020 were recorded as unemployed in the third quarter 2020, and 2.4 % (3.7 million) transitioned into economic inactivity. The partial recovery of the EU labour market, given the relaxation of COVID-19 measures, is particularly visible in the moves of economically inactive persons into the labour market: out of all those persons who were economically inactive in the second quarter of 2020, 91.2 % (95.5 million persons) remained economically inactive in the third quarter of 2020, while record highs of 4.0 % (4.1 million) moved into employment and 4.9 % (5.1 million) towards unemployment. Figure 1 gives an overview of all possible transitions and shows the aggregate transitions between the second quarter and the third quarter of 2020 for 26 EU Member States (data not available for Germany) between the different labour market statuses. Data is shown in absolute numbers to allow a comparison of the actual size of the different flows. The levels indicated for employment, unemployment and inactivity refer to those remaining in each status between the two quarters. The grey arrows indicate the net direction of flows between two statuses. The matrix in Table 1 shows the same flows in % of the initial status, to give an impression of the share of individuals leaving each labour market status. All data shown is seasonally adjusted. 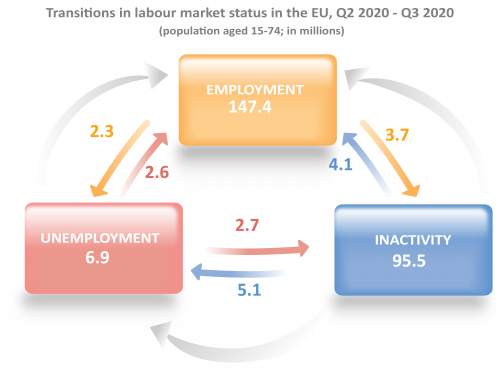 Data on country level is shown in Figure 2. To allow comparison, the focus is on outflows of unemployment from 2018 to 2019. In Estonia and Denmark outflows from unemployment into employment exceeded 55 %. In Greece and Romania less than 20 % of those who were unemployed in 2018 found a job in 2019. 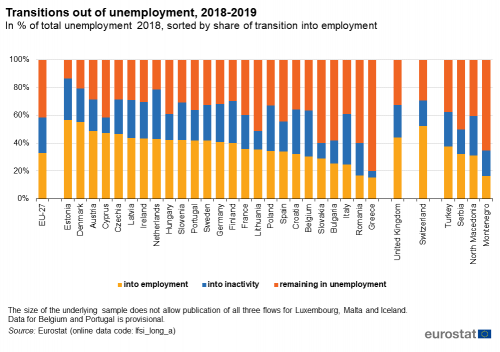 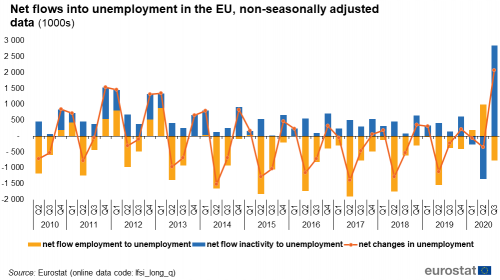 Figure 4 shows the same information using seasonally adjusted data. From Figure 3 we know that the flows are highly seasonal, which means that the size and direction of a flow in and out of unemployment depends not only on general economic conditions, but also on seasonal factors that are repeated in a similar fashion each year. These seasonal factors are removed from the data ("seasonally adjusted data") in Figure 4, and it becomes visible that the red line peaks at the end of 2011, which means that inflows into unemployment were largest (or outflows from unemployment were smallest) during that period. From 2012 on, the red line significantly decreases, indicating a decreasing inflow into unemployment or an increasing outflow from unemployment. From the second quarter of 2014 on, net outflows of unemployment have exceeded inflows in all quarters until 2020. Starting with the second quarter of 2020, the impact of the COVID-19 crisis becomes clearly visible. 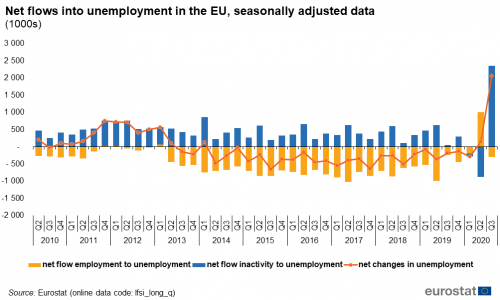 The flow sample weights are then adapted to match the distribution in the target period, namely for each age group x sex x labour status. The steps described in the following could be applied to each individual matrix produced that way. However, in order to avoid empty or poorly populated cells as far as possible and to get more robust results, calculation of the headline indicators for the age group 15-74 starts with a further aggregation of the previous results over age, i.e. all intermediate transition matrix results calculated so far for an individual country are combined into one single matrix, by sex. As they are just added up, also these combined matrices match the relevant ILO labour status distribution in the target period , by sex.

The production of these statistics is, however, not straightforward, as the matched sample is relatively small for most countries; for quarterly transitions, quarterly data is pooled and annual averages are used. As this still does not result in a sufficiently large sample in many cases, a simple regression based method to estimate transition probabilities is applied to the flow of interest, e.g. unemployment to employment. The set of explanatory variables is chosen not depending on an underlying economic model, but instead is driven by the demand for specific breakdowns mentioned above, as well as the availability of data in the LFS, i.e. there is no use made of external sources. The relevant advantage of the regression approach is that it allows us to include a function of age into the regression, exploiting the fact that we have a continuous variable at our disposal. This makes it possible to "borrow strength" from the distribution of age over the dependent variable. From the estimated coefficients of the regression, predicted probabilities are derived. Currently, nine tables of breakdowns based on this methodology are published under Eurostat's "experimental statistics" label. Figure 5 shows an example of the breakdown by age group for job-to-job transitions, one often requested flow based indicator. The figure shows the probability of an individual employed in both the initial and the target quarter, having changed jobs in between (defined as starting a new work contract between the two interviews). The figure gives a good impression of the differences between countries with regard to the total predicted probability. The probability of an employed individual changing jobs between two quarters in 2015 ranged from almost 6% in Sweden to below 1% in Romania and Greece. However, in all countries the transition probability for employed individuals aged 15-24 was much higher than that of older workers, with the lowest rate found for those aged 55-74. This confirmation of a specific pattern for a breakdown for all countries, while overall transition probabilities are so different, shows the need for these as well as further breakdowns. 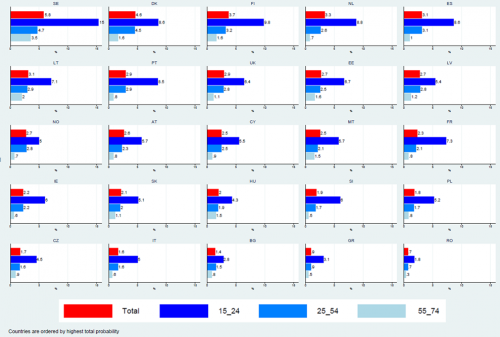