When distinguishing between the main industrial groupings, data show that the production of capital and intermediate goods peaked just before or at the same time as total production and then fell rapidly for over one year until April 2009. Afterwards production in these areas recovered relatively quickly until the first half of 2011. A moderate decline followed this recovery which lasted until early 2013. Between 2013 and 2018 production in these areas increased again until early 2018 and since then has more or less stagnated. In 2020 the production of capital goods decreased massively in March and April but then recovered in the subsequent month.

For energy products the development of the output level was quite different from the evolution of the other areas. During the period from April 2008 to April 2009 production levels in this industry fell by 14 percentage points. But production levels in the energy sector tend to be rather volatile and the drop in production during the main years of the crisis was not so much different from e.g. the period between March 2006 and January 2007 when it had already dropped by 10 percentage points. Overall, the production volume in the European energy production has been on a relatively stable downward trend for several years and in the summer of 2019 stood only at about 80 % of the level in the spring of 2008. In 2020, energy production decreased during the Covid-19 crisis but not to the same degree as other product groups. The recovery, on the other hand, was relatively slow.

Table 1 shows a breakdown of the general development of the main industrial groupings in more detailed NACE divisions. The 2009 decline in production was particularly strong for the production of basic metals, machinery and equipment, and for motor vehicles which together account for more than one fifth of total industrial production. The magnitudes of the various rates of change for consumer goods reflect consumers' possibilities and inclinations to adjust their consumption to the new circumstances in the economic crisis. (Table 1). The only sector that did not register a decline in production levels during the crisis years was the pharmaceutical industry. 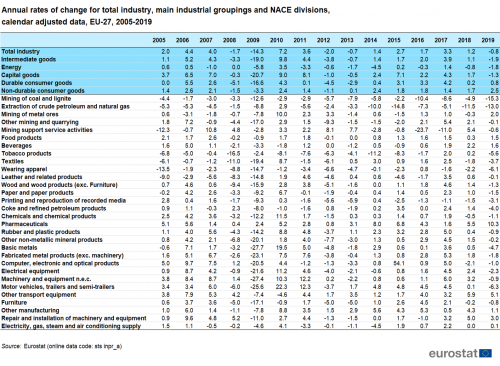 The growth rates for the different industrial sectors for the year 2019 are displayed in Figure 2. Strong increases were recorded for the production levels of pharmaceuticals, and other transport equipment while the mining of coal and lignite fell by 15.3 %. 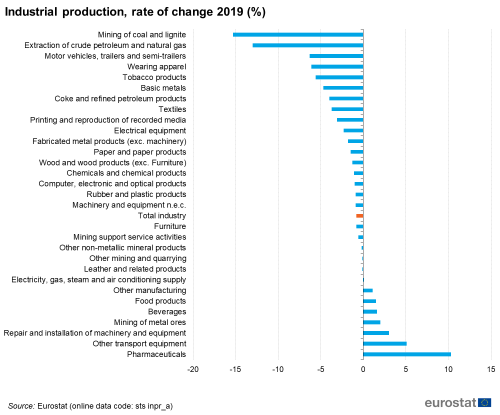 The economic crisis did not start in all Member States at exactly the same moment (Table 2). Several countries (Estonia, Greece, Spain, Luxembourg, Malta and Portugal) already recorded rates of change below -4 % in 2008 but a relatively large number of countries still displayed positive growth rates of industrial production. In 2009, all EU countries experienced a fall in industrial production and the European average rate of decline was more than -14 %. In 2010, all EU countries with the exception of Greece, Croatia, and Cyprus had returned to positive growth rates. After two years of recovery the EU-27 as a whole in 2012 again displayed a negative industrial development. This downwards trend for the EU-27 continued for the following year. However, the negative growth rates were smaller in 2013 than in 2012. In 2014, the EU returned to a positive growth which continued in 2015, 2016, 2017, and 2018. In 2019, industrial production dropped again in the EU-27 and in the euro area, in particular in Germany, Luxembourg, and Romania. 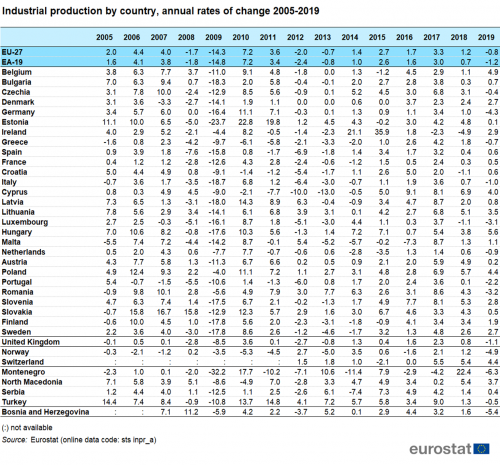 Despite its name the industrial production index is not intended to measure production but should – in theory – reflect the development of value added in the different branches of industry. This means that the inputs obtained by one branch from another must be deducted from its gross output. In this way double counting of production is prevented and the degree of vertical integration of branches should not influence the results for the indicator.

In practice, however, it is difficult to collect value-added data on a monthly basis. Most statistical institutes therefore derive monthly production data from other sources including deflated turnover, physical production data, labour input, intermediate consumption of raw materials and energy etc.

Eurostat publishes, on a monthly basis, the industrial production index for the EU, for the euro area and the Member States; data are also collected for several non-EU countries (Table 2). Data are presented in calendar adjusted/working-day adjusted and in seasonally adjusted form. Currently the indices for industrial production are calculated with 2015 as the base year (=100).

The industrial production index is one of the most important short-term statistics indicators. It is used to identify turning points in the economic development at an early stage and to assess the future development of GDP. In order to serve this purpose it is available on a monthly basis in a detailed activity breakdown and with a rather short delay (1 month and 10 days). The industrial production index is one of the so-called 'Principal European economic indicators (PEEI)' which are used to monitor and steer economic and monetary policies in the EU and in the euro area.