This article presents trends in emissions of all greenhouse gases, namely: carbon dioxide (CO2), methane (CH4), nitrous oxide (N2O), hydrofluorocarbons (HFCs), perfluorocarbons (PFCs), sulphur hexafluoride (SF6) and natrium trifluoride (NF3). In line with the EU international headline target of 20 % reduction of GHG emissions by 2020, data presented in this article include emissions from international aviation and exclude emissions or removals from land use, land use change and forestry (LULUCF). 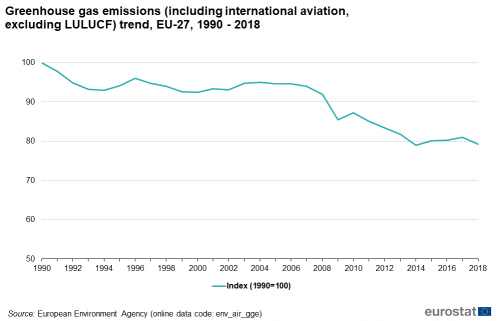 Figure 1 shows that there was a general downward trend to emissions during the 1990–1999 period (aside from a relative peak in 1996, when a cold winter led to an increase in heating requirements). From 1999 to 2008 the evolution of greenhouse gas emissions within the EU-27 remained relatively unchanged. The year 2009 saw a sharp drop in emissions as a consequence of the global financial and economic crisis and the resulting reduced industrial activity. Emissions increased in 2010 and decreased again from 2011 onward. Between 2015 and 2017, GHG emissions had slightly been increasing. In 2018 emissions decreased by 2.1 % (83.6 million tonnes of CO2-equivalents) compared to 2017 levels. 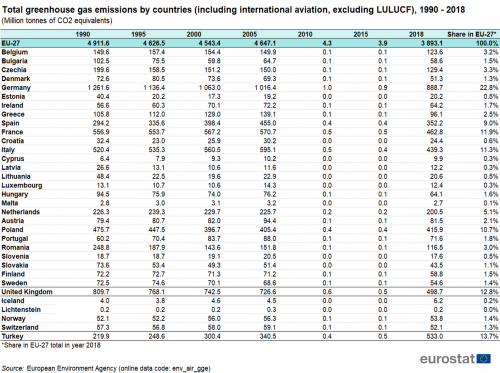 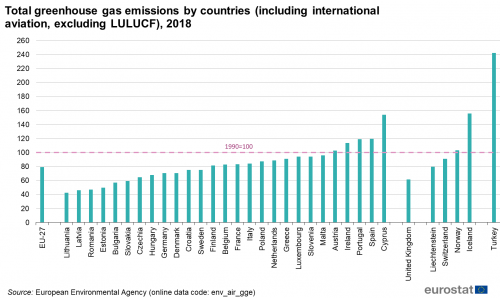 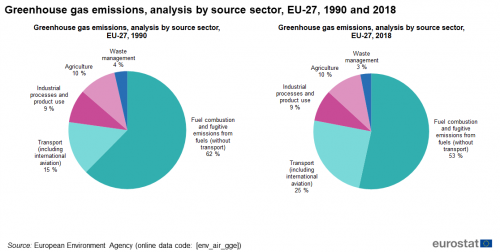 The EU is fighting climate change through ambitious policies at home and close cooperation with international partners. The EU has set itself targets for reducing its greenhouse gas emissions progressively. The EU is on track to meet the 20% emissions reduction target for 2020. By 2050, Europe aims to become the world’s first climate-neutral continent.