In 2018, employment rates for women were below 50 % in four of the candidate countries and potential candidates — North Macedonia, Bosnia and Herzegovina, Turkey and Kosovo. In the EU-27 the rate was 66.5 %.

In each of the candidate countries and potential candidates a higher share of the workforce was composed of self-employed and family workers than was the case in the EU-27.

This article is part of an online publication and provides information on a range of labour market statistics for the European Union (EU) enlargement countries, in other words the candidate countries and potential candidates. Montenegro, North Macedonia, Albania, Serbia and Turkey currently have candidate status, while Bosnia and Herzegovina and Kosovo* are potential candidates.

The activity rate in the EU-27 for persons aged 20-64 was 77.9 % in 2018, in other words approaching four fifths of all people aged 20-64 were either in employment or were unemployed. The remainder (22.1 %) who were outside of the labour force were economically inactive, for example, studying, caring for other people, or retired. The EU-27 activity rate for men was considerably higher, at 84.0 %, some 12.2 percentage points above the corresponding figure for women (see Figure 1).

Activity rates in the candidate countries and potential candidates were generally much lower than in the EU-27 and this was particularly true for women. The latest data available reveal that activity rates for women in the candidate countries and potential candidates were highest in 2018 in Albania (65.4 %), Serbia (64.8 %) and Montenegro (62.5 %), while North Macedonia also reported that more than half of all women aged 20-64 were either in work or available for work. At the other end of the range, the activity rate for women was less than half in Bosnia and Herzegovina, around two fifths in Turkey and just over one fifth in Kosovo.

Gender inequality in activity rates may reflect, among other factors, patriarchal family structures, the degree of female empowerment, religious beliefs, other cultural factors, pay differences between men and women, and difficulties in relation to both access to jobs and career development for women.

A comparison between activity rates for men and women in 2018 across the candidate countries and potential candidates shows that the widest gender gaps were recorded in Kosovo and Turkey, where activity rates for women were 52.0 and 43.0 percentage points lower than the corresponding rates for men. Three of the candidate countries and potential candidates reported gender gaps of less than 25 points: Albania (19.1 points), Montenegro (16.2 points) and Serbia (15.5 points).

Concerning developments in the gender gap for employment rates, there was a mixed picture among the candidate countries and potential candidates, with five widening and two narrowing

The EU-27 employment rate for men (78.3 %) remained considerably higher than the corresponding rate for women (66.5 %) in 2018, with this gender gap remaining at 11.8 percentage points as it had been five years earlier (see Figure 3). 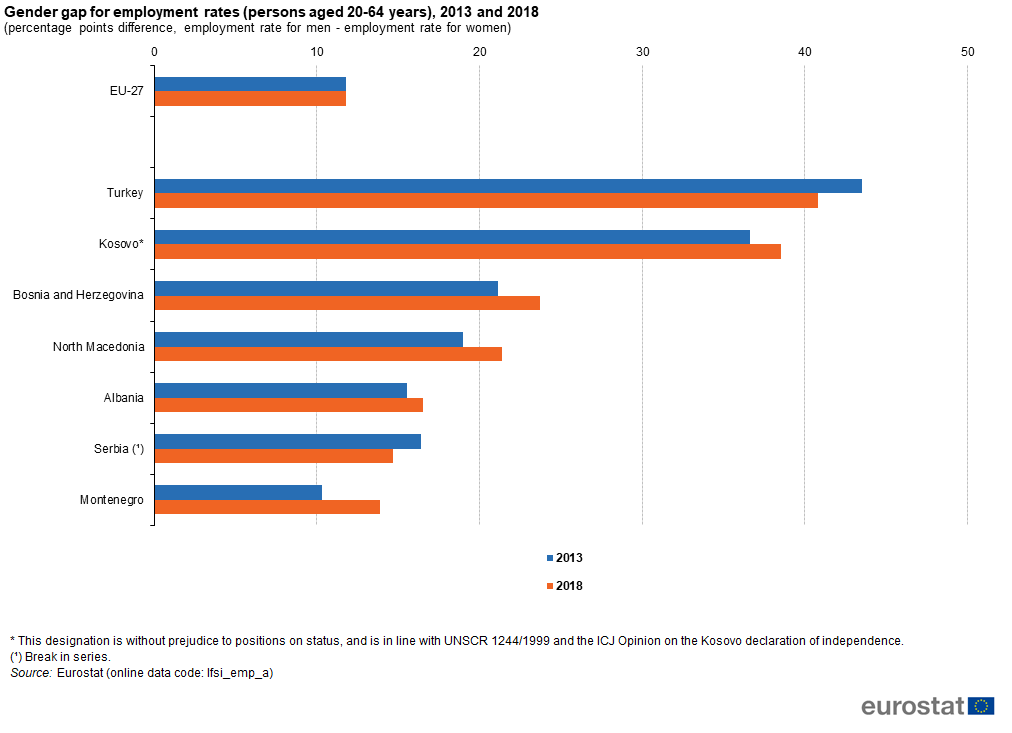 Among the candidate countries and potential candidates, the gender gap in employment rates in 2018 was lowest in Montenegro (13.8 points difference between the rates for men and women), while four other candidate countries and potential candidates recorded gaps that did not exceed 25 points. At the other end of the range, the largest differences between employment rates for men and women were recorded in Kosovo and Turkey, with gaps of 38.5 and 40.8 points respectively.

There was a narrowing of the employment gender gap in two of the candidate countries and potential candidates between 2013 and 2018, as shown in Figure 3. This was strongest in Turkey where the gap narrowed by 2.7 percentage points, while the gap also narrowed in Serbia (note there is a break in series). The employment gender gap widened elsewhere, most notably in Montenegro where it increased by 3.5 points over the period under consideration.

In Albania, nearly two fifths of the workforce was engaged in agriculture, forestry and fishing

In four of the candidate countries and potential candidates, the share of people employed by industry in 2018 was higher than the share recorded for the EU-27 (18.2 %): this was not the case in the services-dominated economies of Montenegro and Kosovo or in the agriculture-dominated economy of Albania, where lower shares were recorded.

Analysis of employment by working status

One out of every seven (14.4 %) people in employment in the EU-27 in 2018 were self-employed or a family worker; as such, the vast majority (85.6 %) of the workforce were employees. The share of the self-employed and family workers in total employment in the EU-27 declined during the period 2013-2018 (as shown in Table 2). This share tends to fall gradually during periods of economic growth and rise during periods of more testing economic conditions (for example, at the height of the global financial and economic crisis in 2009 and 2010).

The structure of employment by working status was quite different in most of the candidate countries and potential candidates. Indeed, self-employed and family workers accounted for more than half (55.6 %) of total employment in Albania, close to one third (32.0 %) of total employment in Turkey, and just under three tenths in Serbia (28.3 %) and Kosovo (27.7 %). These comparatively high proportions reflect, to some degree, the relative significance of agricultural activities in the enlargement economies, with work spread across numerous small scale, family-run farms or farming co-operatives. By contrast, the structure of employment by working status in Bosnia and Herzegovina, Montenegro and North Macedonia more closely resembled that of the EU-27, as the shares of self-employed and family workers in total employment were between one quarter and one fifth. In contrast to the situation in the EU-27 and in the other candidate countries and potential candidates for which a time series is available, this share rose between 2013 and 2018 in Montenegro.

While in many economies the largest contractions in economic activity as a result of the global financial and economic crisis were recorded in 2009, it was not uncommon to see unemployment rates continuing to increase in 2010 and beyond. Indeed, the EU-27’s annual unemployment rate rose from a low of 7.2 % in 2008 to reach 11.4 % by 2013 (see Table 3). However, in the most recent five years for which data are available the EU-27 unemployment rate fell by 0.5-1.0 points each year, such that by 2018 the share of the labour force that were unemployed stood at 7.3 %.

Table 5 provides a summary of developments in labour markets with data for 2008, 2013 and 2018. Aside from long-term unemployment rates, another indicator that has received a great deal of attention in recent years is the youth unemployment rate. Just under one sixth (16.1 %) of the EU-27’s labour force aged 15-24 years was without work in 2018, compared with 24.5 % in 2013 (as youth unemployment had increased during the financial and economic crisis) and 16.2 % in 2008.

Data for the enlargement countries are collected for a wide range of indicators each year through a questionnaire that is sent by Eurostat to candidate countries or potential candidates. A network of contacts has been established for updating these questionnaires, generally within the national statistical offices, but potentially including representatives of other data-producing organisations (for example, central banks or government ministries). The statistics shown in this article are made available free-of-charge on Eurostat’s website, together with a wide range of other socio-economic indicators collected as part of this initiative.

The economically active population (labour force) comprises employed and unemployed persons, but not the economically inactive, for example children, students and pensioners as well as people caring for family members; some of these may be of working-age.

The EU LFS defines persons in employment as those aged 15 and over, who, during the reference week, performed some work, even for just one hour per week, for pay, profit or family gain. The labour force also includes people who were not at work but had a job or business from which they were temporarily absent, for example, because of illness, holidays, industrial disputes, education or training. This definition follows guidelines of the International Labour Organisation (ILO).

Employment statistics are frequently reported as employment rates to discount the changing size of countries’ populations over time and to facilitate comparisons between countries of different sizes. These rates are typically published for the working age population, which is generally considered to be those aged between 15 and 64 years, or those aged between 20 and 64 years (the latter ratio takes account of the generally increasing proportion of young people who remain in education after compulsory education has ended).

Eurostat publishes unemployment statistics based on a definition of unemployment provided by the International Labour Organisation (ILO) for which there are three criteria, namely: being without work, actively seeking work, and being available for work. An unemployed person is defined by Eurostat, as:

The activity rate is, for any given age group, the proportion of active persons in relation to the total population for that same age group. The economically active population comprises employed and unemployed persons.

The employment rate is, for any given age group, the percentage of employed persons in relation to the total population of that same age group.

The unemployment rate is, for any given age group, the proportion of people who are unemployed as a share of the total labour force for that same age group.

Labour market statistics are increasingly used to support policymaking and to provide an opportunity to monitor participation in the labour market. In the aftermath of the global financial and economic crisis, these statistics have been used to monitor the effects of the crisis on labour markets (which notoriously lag behind fluctuations in economic activity).

Eurostat has the responsibility to ensure that statistical production of the enlargement countries complies with the EU acquis in the field of statistics. To do so, Eurostat supports the national statistical offices and other producers of official statistics through a range of initiatives, such as pilot surveys, training courses, traineeships, study visits, workshops and seminars, and participation in meetings within the European statistical system (ESS). The ultimate goal is the provision of harmonised, high-quality data that conforms to European and international standards.