In 2019, price levels for investment in the EU were highest for Finland (32% above the EU average) in Finland and lowest for Romania (35% below the EU average).

Tweet
Portugal and Denmark had the highest price level for machinery and equipment in the EU in 2019, while Finland was the most expensive for construction investment.

In 2019, the highest price levels for investment among the EU Member States were observed in Finland at 32% above the EU average, while in the least expensive EU Member State, Romania, the price level was 35% below the EU average. These are the main conclusions drawn from the results of two price surveys carried out in 2019 within the Eurostat-OECD Purchasing Power Parities (PPP) Programme. The two surveys cover construction (residential buildings, non-residential buildings and civil engineering works) and machinery, equipment and other products.

The results of the surveys are expressed in price level indices (PLIs), which provide a comparison of countries' price levels with respect to the EU average.

Figure 1 shows the 2019 PLIs for total investment. Norway, Switzerland and Finland record the highest price levels for investments, with PLIs of 140, 137 and 132, respectively. At the other end of the spectrum, the least expensive countries for investment are North Macedonia and Turkey, with PLIs of 55 and 57.

Machinery, equipment and other products

Figure 2 shows the PLIs for machinery and equipment, including metal products and equipment, electrical and optical equipment and transport equipment (see classification of investment products used). The most expensive countries for machinery, equipment and other products are Iceland, Norway, Portugal, Denmark and Malta with respective PLIs of 121, 120 115, 115 and 113, while Poland and Hungary are the least expensive countries, with respective PLIs of 91 and 92. The main characteristic shown by this chart is that the price levels for this type of product are relatively homogeneous across countries.

Table 1 shows the countries’ PLIs for the aggregate machinery and equipment as well as for its three main sub-categories: metal products and equipment, electrical and optical equipment and transport equipment. In addition, the PLIs for software are shown. Countries are sorted according to their overall price level for investment shown in the first column. The shaded fields indicate the highest and lowest PLIs per category among all 37 participating countries. The highest and lowest PLIs among the 27 EU Member States are marked in bold. 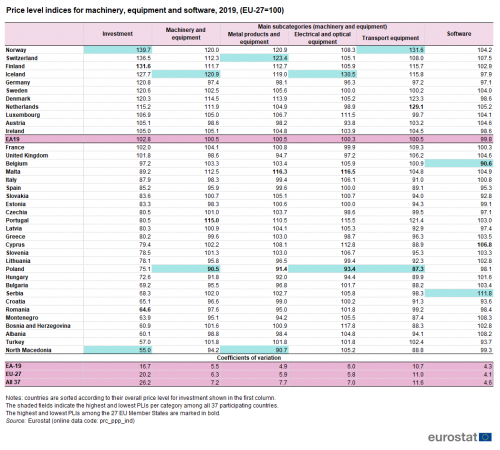 The coefficients of variation at the bottom of Table 1 confirm the relatively low price dispersion across countries for these investment products. The highest homogeneity is visible within the euro area.

Figure 3 presents the PLIs for construction. The most expensive countries for construction investment are Switzerland, Norway, Finland, Sweden, Germany and Iceland with PLIs of 175, 150, 147, 144, 144 and 138 respectively. On the other hand Turkey, North Macedonia, Bosnia and Herzegovina, Albania, Romania, Montenegro, Serbia and Croatia are the least expensive countries for investment in construction, showing price levels below 50% of the EU average. The lowest construction price levels were observed in Turkey and North Macedonia, both with a PLI of 37. 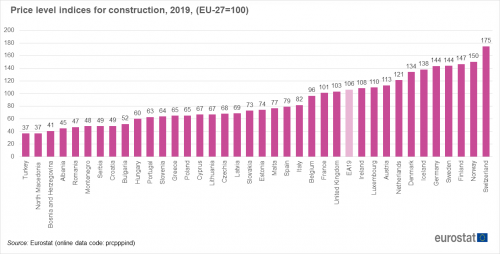 Table 2 shows the PLIs for the main categories of construction expenditure (residential buildings, non-residential buildings and civil engineering works). Countries are sorted according to their overall price level for investment shown in the first column. As in Table 1, the shaded fields indicate the highest and lowest PLIs per category among all 37 participating countries. The highest and lowest PLIs among the 27 EU Member States are marked in bold. 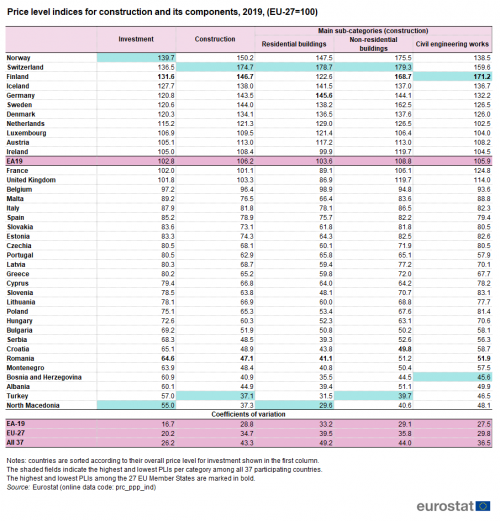 Published PPPs usually refer to product groups or broad aggregates like gross domestic product (GDP) rather than to individual products. However, these aggregate PPPs are based on data for individual goods and services.

As explained above, the PLI for a given country is calculated as its PPP divided by its annual average exchange rate to the euro. This implies that exchange rate movements have an impact on the PLIs. The depreciation of a country’s currency against the euro will make the country less expensive in comparison to euro area countries and this will be shown as decrease of the relative price level expressed in the PLI.

Main characteristics of the survey on prices for machinery, equipment and other products

From the sub-groups listed as investment categories, no prices are collected for other transport equipment, boats, steamers, tugs, floating platforms and rigs, locomotives, rail-cars, vans, wagons and other rail equipment, aircrafts, helicopters, hovercrafts and other aeronautical equipment, and products of agriculture, forestry and other products. PLIs for these sub-groups are estimated taking PPPs of other sub-groups as proxy.

Main characteristics of the survey on construction prices

The 2019 survey on construction prices, whose results are published in this article, was carried out in three months - May, June and July 2019.

Countries collected prices for a list of "bills of quantities", which are comparable construction projects such as a detached house, an office building or an asphalt road. Each bill of quantities consists of a number of chapters or major components (like earthworks, concrete, masonry, etc.) which are made up of items or elementary components (like excavation of the terrain, dumping and compacting of soil, etc.).

PPPs are also applied in analyses of relative price levels across countries. For this purpose, the PPPs are divided by the current nominal exchange rate to obtain a price level index (PLI) which expresses the price level of a given country relative to another, or relative to a group of countries like the EU-27.

The common rules for the provision of input data, and for the calculation and dissemination of PPPs, are laid down in Regulation (EC) No 1445/2007 of the European Parliament and of the Council of 11 December 2007.