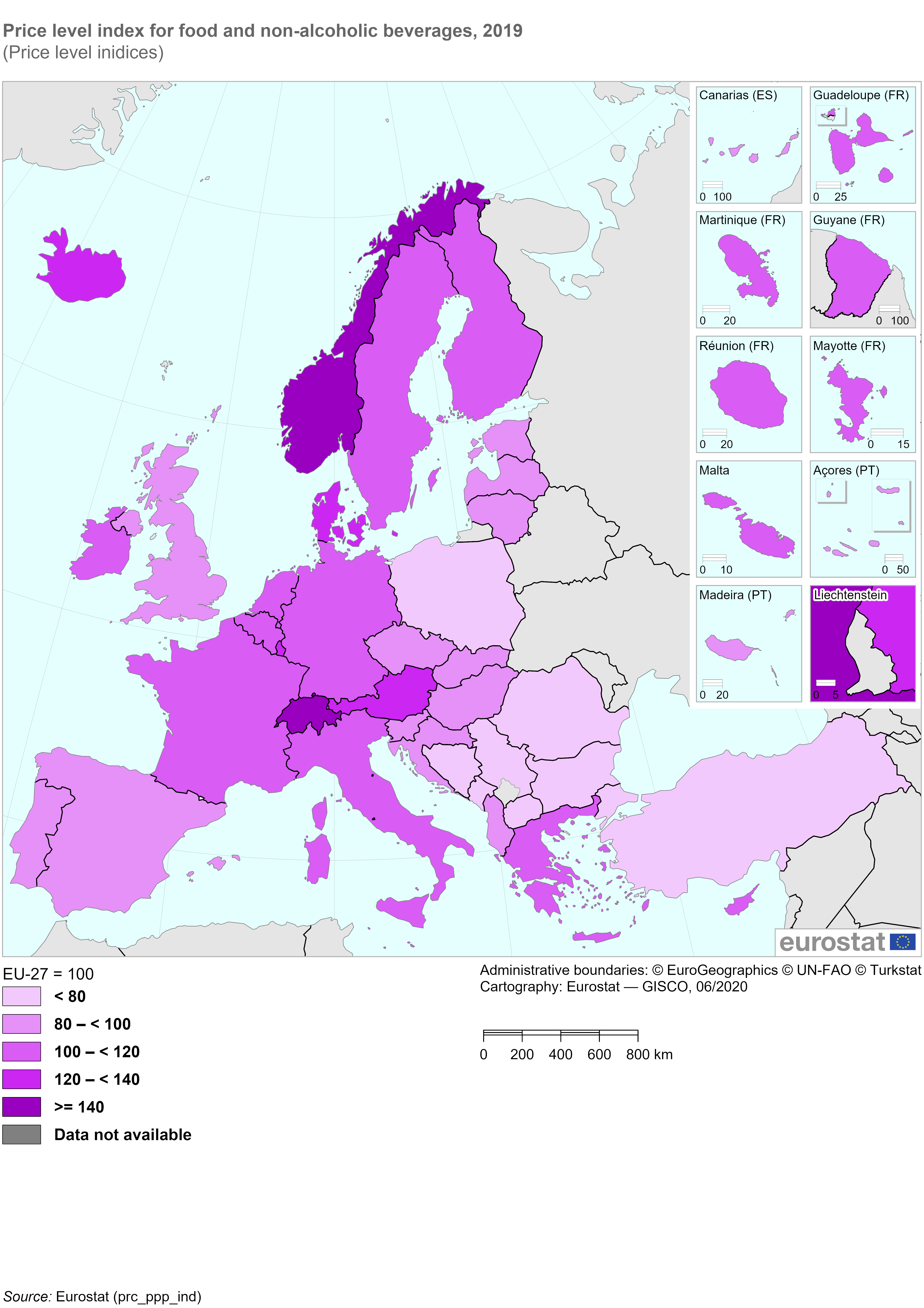 The results of the survey are expressed in price level indices (PLIs), which provide a comparison of countries' price levels with respect to the European Union average. Map and Figure 1 show the 2019 PLIs for food and non-alcoholic beverages, while the tables present PLIs for sub-groups of products.

Table 1 shows the PLIs for four important groups: food, non-alcoholic beverages, alcoholic beverages and tobacco. These groups represent on average 16%, 2%, 2% and 3% of household expenditure respectively. For reference, the PLIs of total household final consumption expenditure (HFCE) are also presented. The highest and lowest PLIs per product group among the 27 EU Member States are marked in bold. The shaded fields indicate the highest and lowest PLIs among all 37 participating countries. At the bottom of the table, coefficients of variation are provided for the euro area (EA-19), the pre-2004 EU Member States (EU-15), the current composition of the EU (EU-27) and the group of all countries participating in the program (all 37). The coefficients of variation is defined as the standard deviation of the PLIs of the respective group of countries as a percentage of their average PLI. The higher the coefficients of variation, the higher is the price dispersion in the respective product group. 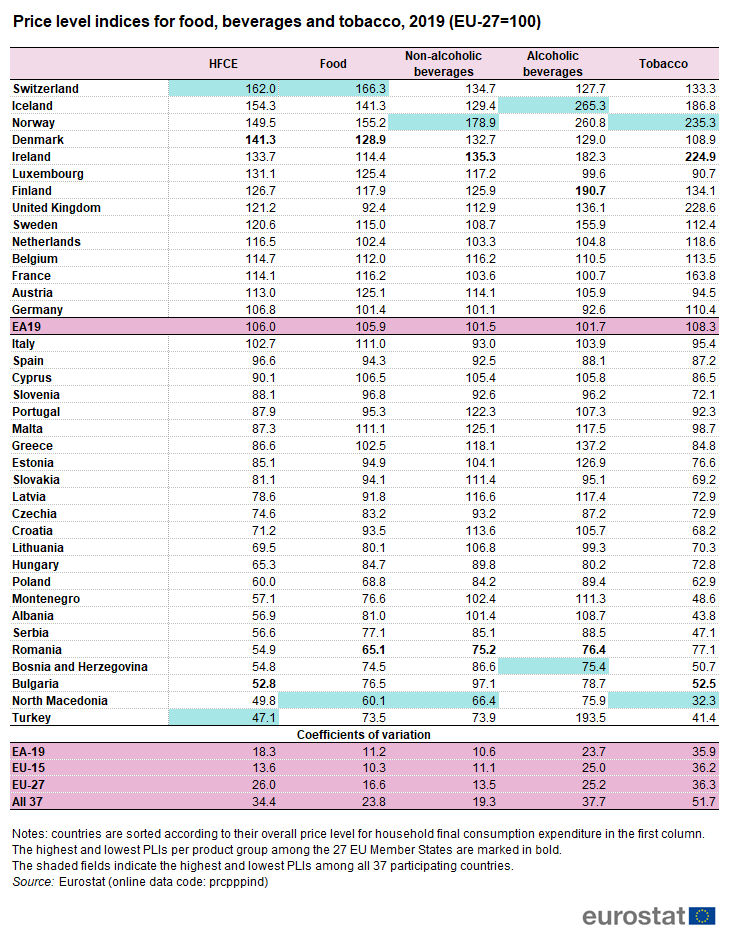 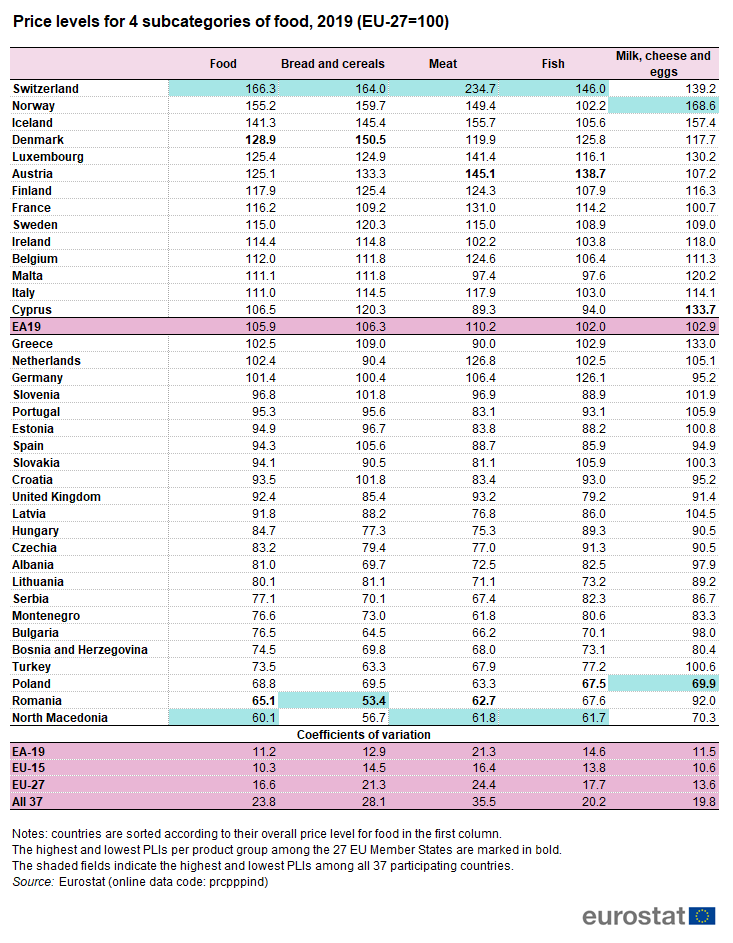 Price levels for oils and fats, fruits, vegetables, potatoes and other food products

Table 3 shows the PLIs for three further sub-groups of food products: oils and fats; fruits, vegetables and potatoes; and other food products. These sub-groups represent on average 4%, 22% and 14% of household expenditure for food, respectively.

Within these 3 sub-groups, the highest price dispersion can be observed for fruits, vegetables and potatoes. 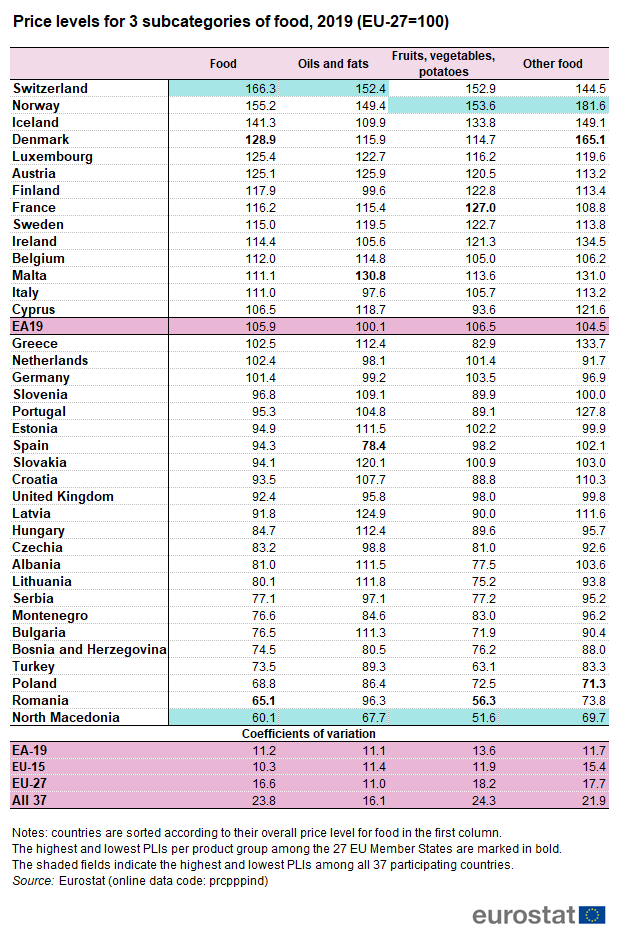 A comparison of the price dispersion within the EU observed on the basis of the surveys conducted since 2009 shows that for three main groups of products dispersion in 2019 was lower than in 2009.

PLI for a given country is calculated as its purchasing power parity (PPP) divided by its annual average exchange rate to the euro. This implies that exchange rate movements have an impact on the PLIs. A depreciation of a country's currency against the euro will make the country cheaper in comparison to euro area countries and this will show as a decrease of the relative price level expressed in the PLI. The major price level change observed in 2019 can be at least partly explained by fluctuations of country's currency against the Euro. In 2019, the national currency of Turkey showed a large depreciation (11% between 2018 and 2019).

Within the framework of the Eurostat-OECD Purchasing Power Parities (PPP) programme, surveys on prices of household goods and services are carried out cyclically by the National Statistical Institutes (NSIs) of 37 countries. Each survey cycle comprises 6 surveys, each related to a particular group of household consumption products. As 2 surveys are run per year, the whole survey cycle takes 3 years to conclude, before the next cycle starts. The prices used for this publication were collected in spring 2018. The PLIs presented in this article are based on annual national average prices for about 440 goods in total. The expenditure shares reported in this article are based on national accounts data for 2019 and represent the average over all participating countries. The national accounts data are also used as weights in the aggregation of detailed PLIs to aggregate PLIs such as for household final consumption expenditure (HFCE).

The food sub-groups presented in the article include the following types of products: