This article is part of a set of statistical articles based on the Eurostat online publication "Agriculture, forestry and fishery statistics". It focuses on greenhouse gas emissions from agriculture and aims to give an overview of selected statistics and indicators in the European Union (EU). 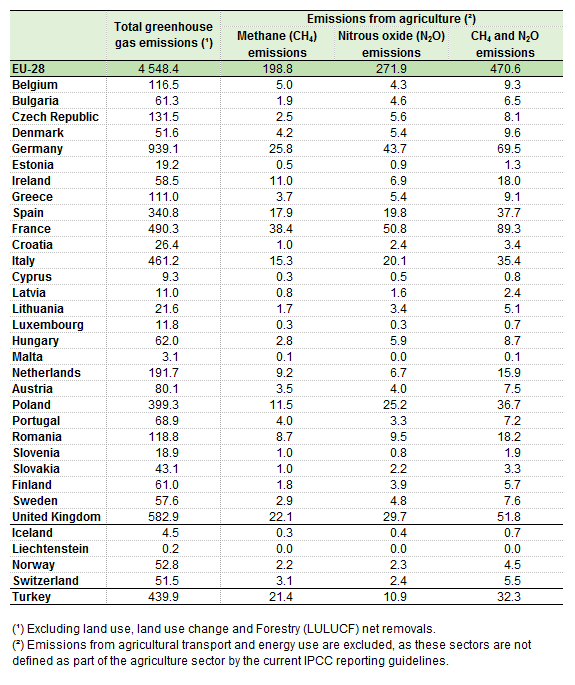 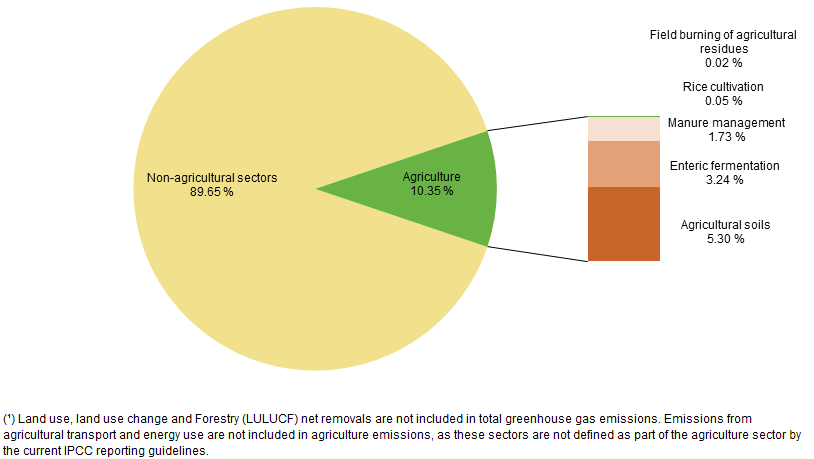 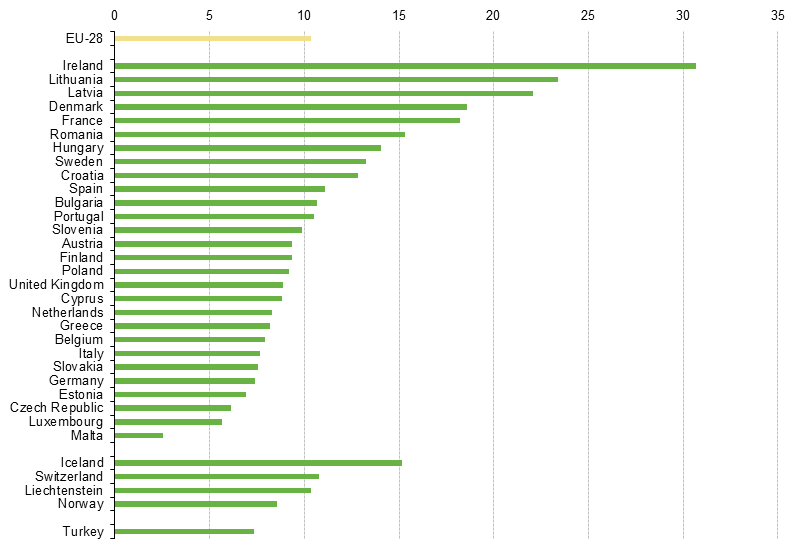 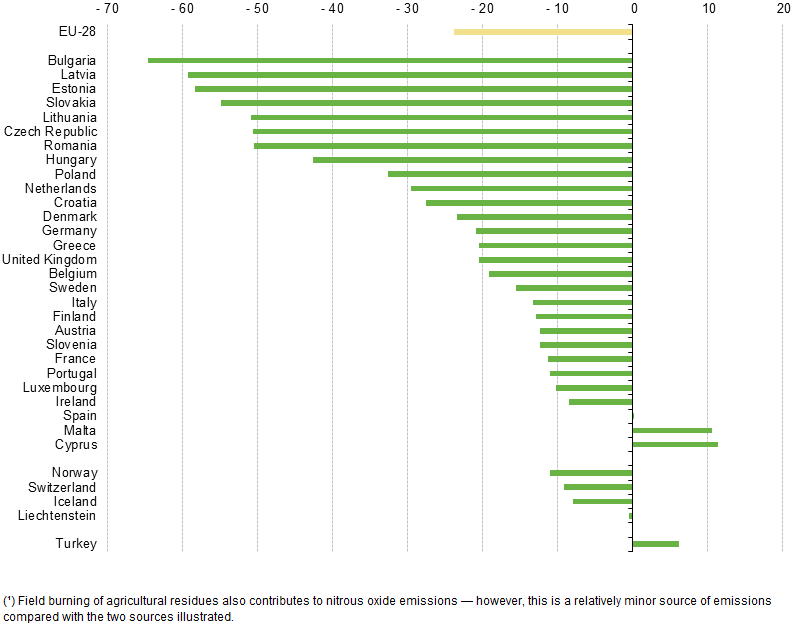 Agricultural activities in the EU-28 generated 470.6 million tonnes of CO2 equivalent in 2012, corresponding to about 10 % of total greenhouse gas emissions (see Table 1); note that information on land use, land use change and forestry is excluded (as this heading is omitted from the measurement of greenhouse gases under the Kyoto Protocol).

EU-28 greenhouse gas emissions from agriculture declined by 147.3 million tonnes of CO2 equivalents over the period between 1990 and 2012, a decline of almost one quarter (23.8 %). This was a slightly faster pace than the reduction recorded for all greenhouse gas emissions in the EU-28 (down 19.2 %), although the difference narrowed rapidly from 2008 onwards (see Figure 1) — reflecting the impact of the financial and economic crisis on industrial emissions and emissions linked to levels of consumption.

As may be expected, those EU Member States with the largest agricultural sectors tend to account for the highest greenhouse gas emissions from agriculture, reflecting their larger areas of farmland, higher levels of production, and extended livestock populations. France and Germany together contributed just over one third (33.7 %) of the EU-28’s greenhouse gas emissions from agriculture in 2012. The combined emissions of the United Kingdom (11.0 %), Italy (7.5 %), Spain (8.0 %) and Poland (7.8 %) accounted for more than one third (34.3 %) of the total.

Figure 3 shows that agriculture accounted for a 30.7 % share of total greenhouse gas emissions in Ireland in 2012. This was the highest contribution from agriculture among any of the EU Member States and could be contrasted with a low of 2.5 % recorded in Malta. These figures reflect the relative importance of the livestock industry to Ireland’s (agricultural) economy, as well as the relatively low level of greenhouse gas emissions in Ireland from other sectors (such as energy production or transport).

By contrast, the volume of agricultural greenhouse gas emissions produced in Spain was similar in 2012 to the level recorded in 1990 (+ 0.1 %), while the level rose in Cyprus by 11.3 % and by 10.6 % in Malta; in these Member States there were marked changes in the livestock mix. In Spain, the number of cattle rose by 14.0 % during the period 1990 to 2012 (adding 700 000 head to the national herd), while the number of pigs increased by 58 % (an additional 9.3 million head), although there were 32 % fewer sheep (the national flock declining by about 7.7 million head). In the case of Cyprus, livestock numbers were consistently higher (across all types of animal) in 2012 than in 1990, with a 4 % increase in the number of cattle, a 12 % increase in the number of sheep, and a 42.0 % increase in the number of pigs. In the case of Malta the increase in livestock was in the goat and sheep categories, with an 85 % and 45 % rise, respectively over the last decade[1].

There are a number of farm management practices that can potentially reduce agricultural greenhouse gas emissions. These vary in cost-effectiveness and practicality, but include: the optimisation of fertiliser application rates; the continuation of non-fertilised set-aside areas; improved feed conversion efficiency by optimising livestock diets; improved animal productivity and rumen (stomach) efficiency through the use of feed additives and breeding; better control of manure management systems to reduce the extent of anaerobic decomposition as well as the covering of manure and slurry lagoons. Measures to reduce carbon dioxide emissions from soils or to enhance carbon sequestration include the maintenance of permanent pasture, conservation tillage, appropriate crop rotation and cover crops.