The group 'Fungicides and bactericides' was the most sold group of pesticides in the EU in 2017.

In 2017, France, Germany, Italy and Spain collectively sold over 65 % of the total EU pesticide sales volume. 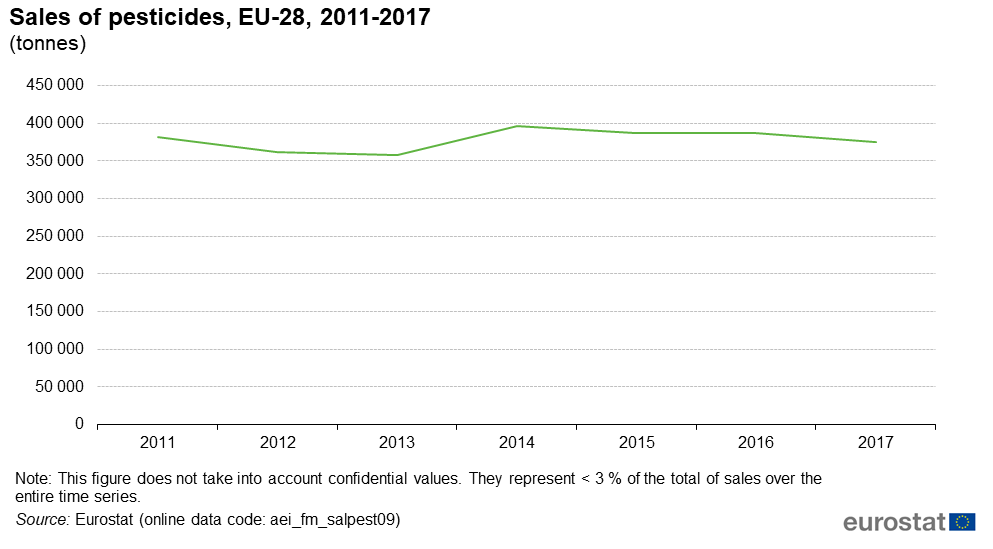 This article provides a fact sheet of the European Union (EU) agri-environmental indicator consumption of pesticides. It consists of an overview of recent data, complemented by information on definitions, measurement methods and context needed to interpret them correctly. The consumption of pesticides article is part of a set of similar fact sheets providing a complete picture of the state of the agri-environmental indicators in the EU.

Analysis at EU and country level

Sales of pesticides have remained rather stable in the EU countries since 2011 (Figure 1). The total volume sold is annually around 380 000 tonnes. It should be noted that over the whole time period 2011-2017, < 3 % of the total sales volume are confidential values and therefore not included.

The major groups of pesticides which recorded the highest sales volumes both in 2011 and 2017 were 'Fungicides and bactericides' and 'Herbicides, haulm destructors and moss killers' (Table 1). Four EU countries (France, Germany, Italy and Spain) recorded the highest volumes sold in most groups, and together these four countries sold over 65 % of the total volumes reported in the EU. These countries are also the main agricultural producers in the EU, with collectively 46 % of the total EU utilised agricultural area (UAA), and 47 % of the total EU arable land. 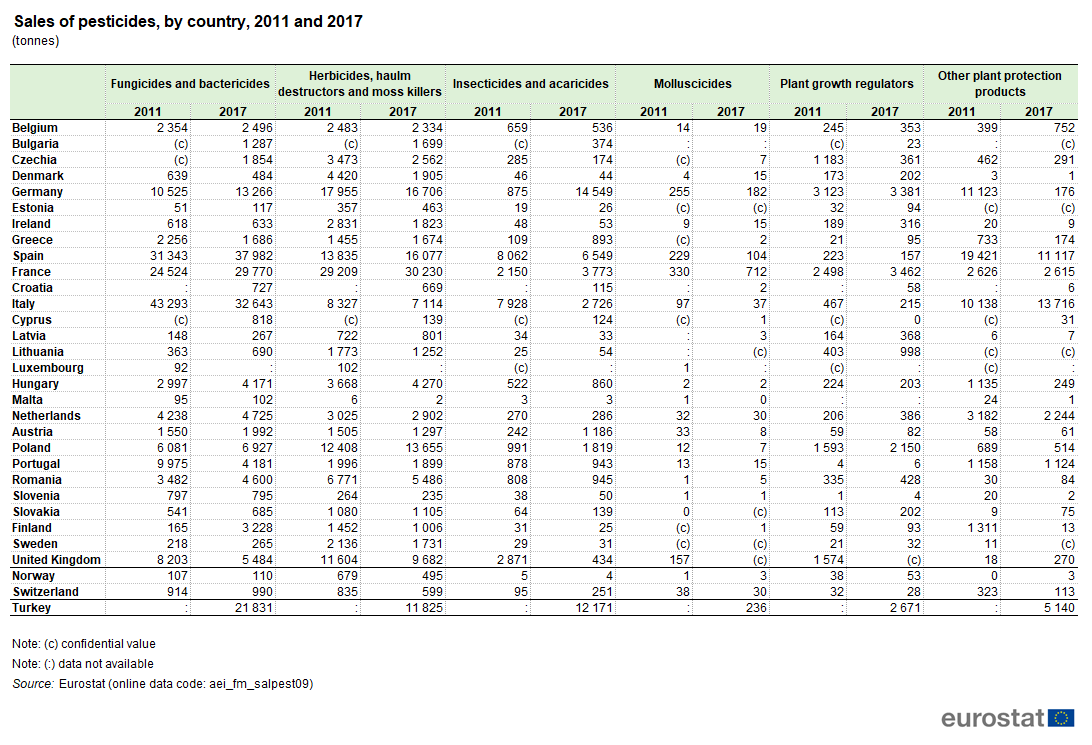 In order to assess if the total volume of pesticides sold is changing, the 14 EU countries (Belgium, Denmark, Germany, Ireland, Spain, France, Italy, Hungary, Netherlands, Austria, Poland, Portugal, Romania and Slovenia), which provided non-confidential data for all major groups in both 2011 and 2017, were analysed (Table 2). The analysis showed that in 2011, these countries recorded sales of 335 005 tonnes of pesticide active substances, and in 2017 they recorded 330 080 tonnes, i.e. a slight decrease of 1.5 %. There are big differences between countries; in 2017 Denmark had only half the sales volume of 2011 (Figure 2). According to the Danish National Action Plan on Pesticides 2017-2021, a tax increase on pesticides introduced in 2013 led to an initial stock-piling of pesticides prior to the entry into force of the new tax. As a result, the sales have been significantly lower as of the year 2014. Although the effect is declining, according to the Danish authorities, it explains the large decrease in sales volume. In Portugal, pesticide sales decreased by 42 %, in Ireland by 23 % and in Italy by 20 %. The Netherlands and Slovenia reported a decrease of 3 % and Spain 2 %. Increased sales were recorded in Austria (34 %), Poland and France (15 %), Hungary (14 %), Germany (10 %), Belgium (5 %) and 1 % in Romania. 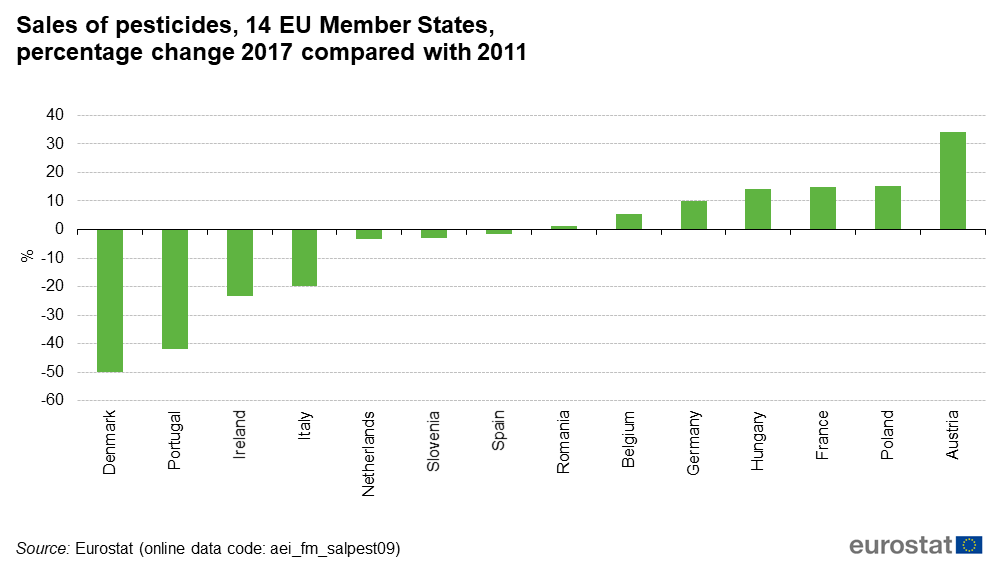 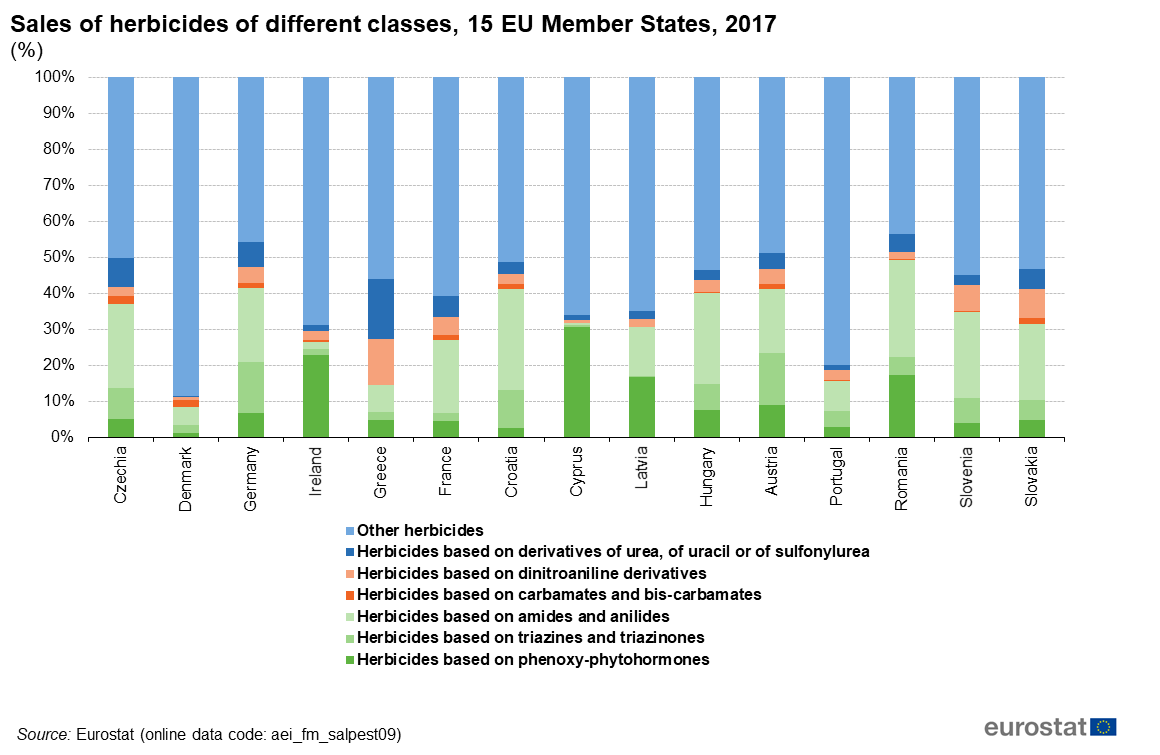 For the purpose of this article, the term 'pesticides' refers to the plant protection products and covers the following categories:

The consumption of pesticides in agriculture would best be indicated by the rates applied by the farmers. This data is, however, not available today. Supporting this indicator are the volumes sold, and the statistics presented in this article refer exclusively to the quantities sold of different pesticide categories.

This indicator is linked with other agri-environmental indicators, available on the Eurostat webpage.

The data collection from reference year 2011 onwards is based on Regulation (EC) No 1185/2009 concerning statistics on pesticides, which established a common framework for the systematic production of Community statistics on sales and use of those pesticides which are plant protection products. The 'Harmonised classification of substances' classifies each active substance in a major group, category of product and chemical class. Eurostat is permitted to publish non-confidential country data at the level of major group and category of product.

Plant protection products are preparations consisting of or containing one or more active substances, in the form in which they are supplied to the user, intended to:

Nevertheless, there is no common definition adopted by all Member States and there can be significant differences in the range of products used in different countries, so comparability is limited. Additional information on the situation in specific countries is required for any detailed assessment. Data refer to amounts of active substances, which are the substances in a commercial product that cause the desired effect on target organisms (fungi, weeds, pests, etc.). Base data is generally in kg of active ingredient sold per year for each of the main functional categories of products ('Herbicides, haulm destructors and moss killers', 'Fungicides and bactericides', 'Insecticides and acaricides' and others). Data on sales of pesticides cover both agricultural and non-agricultural uses.

Although using a total active ingredient volume as a pesticide indicator provides a broad indication of loading, it overlooks factors governing pesticide fate and intrinsic properties, which are often key parameters for determining long-term environmental impact. Total active ingredient values also do not discriminate between pesticides with transitory effects and those which are more persistent in the environment which may pose a greater risk to environmental and ecological quality objectives. There is no absolute relationship between the loading of active substances and the potential threat to the environment and human and animal health. Indicators of the intensity of pesticide use can, however, be a first step towards risk evaluation.

Pesticide sales statistics are affected by confidentiality restrictions. The impact of these restrictions on the data varies according to the Member States, the type of pesticides and the year. As regards the total sales of pesticides in the EU 2011-2017, < 3 % of the volume is confidential data.

Pesticides fight crop pests and reduce competition from weeds, thus improving yields and protecting the availability, quality, reliability and price of produce to the benefit of farmers and consumers. At European Union level, the principle aim is to reduce the risks and impact of pesticide use on human health and the environment. Member States monitor pesticide residues in food and feed relative to European maximum residue limits (MRLs) and in 2017[1] 96 % of the around 88 000 samples analysed fell within the legal limits. Exceedances observed during the annual monitoring activities are more often found in foods imported from outside the EU (7.6 % of the samples from third countries in 2017 contained residues that exceeded the permitted concentrations), but some residue problems can also be assigned to European agriculture (2.6 % of the samples in 2017). The environmental risk of pesticide use varies considerably from one pesticide to another, depending on the intrinsic characteristics of their active substances (toxicity, persistence, etc.) and use patterns (applied volumes, application period and method, crop and soil type, etc.). Measuring the real use of pesticides would allow a better estimate of the risks by crop and region for different compartments of the environment or for human health. At the moment harmonised statistical data on use of pesticides are not available on a European scale. Under Regulation (EC) No 1185/2009 concerning pesticide statistics, data deliveries on the agricultural use by crop every five years started in 2015, but the data remain fragmented. Annual data on sales statistics are available as of 2011.

Data on use of pesticides are also needed for the indicator AEI 17 – Pesticide risk. To calculate true risk indicators, it is necessary to establish toxicity and ecotoxicity levels for each active substance and combine these with relevant data on the quantities used and other information. The way in which pesticides are used (quantities, time and method of application, type of crop, type of soil, etc.) influences their effect on human health and the environment. However, apart from the crop type, statistics on these factors are not yet available.

Pesticide use is partly influenced by economics (the most profitable crops are the ones most economically viable to treat), and partly by local soil and climate conditions which determine the vulnerability of a site to pest infestation. It also depends on the type of farming (conventional or organic). Annual variations can depend on the weather conditions, pest outbreaks, sales prices, etc.

As a result of their potential toxicity, often even at very low levels, the application of pesticides is now strictly controlled by Community legislation since 1991 (by national legislation prior to 1991). Policy control measures in the EU are driven by the objectives of protecting human health and the environment (consumers, operator safety, protection of water quality and biodiversity).

In 2009, the Sustainable Use Directive (Directive 2009/128/EC) established a framework to achieve a sustainable use of pesticides by reducing the risks and impacts of pesticide use on human health and the environment and promoting the use of integrated pest management and of alternative approaches or techniques such as non-chemical alternatives to pesticides. Instructions to adopt National Action Plans, develop obligatory systems for training and education, set up a framework for equipment inspections, examine alternative pest management methods, secure water protection, and apply harmonised risk indicators are fundamental. Following up on the Sustainable Use Directive, Member States have introduced country specific measures setting objectives and timetables to reduce risks and impact of pesticide use.

Article 15(4) of Directive 2009/128/EC requires the European Commission to calculate risk indicators at Union level using statistical data collected in accordance with Union legislation concerning statistics on plant protection products and other relevant data, in order to estimate trends in risks from pesticide use. Member States are also obliged to calculate the harmonised risk indicators (Article 15(2) of the Directive). The first harmonised risk indicators were introduced through amendment C(2019) 3580. The indicators will be published on the SUD webportal.

The most important legislation with regard to pesticides are the following:

Other relevant legislation include:

The use of pesticides plays an important role in agricultural production by ensuring less weed and pest damage to crops and a consistent yield. However, their use can have negative environmental impacts on water quality, terrestrial and aquatic biodiversity (persistence and toxic effects on non-target species, etc.). The Sustainable Use Directive promotes the use of integrated pest management and of alternative approaches and techniques such as non-chemical alternatives to pesticides. Integrated Pest Management (IPM) is a strategy that promotes a safer and more sustainable management of pesticides. IPM strategies are evolving because of new emerging pests and climate change, and involve crop rotation, hygiene measures to prevent pest spread, protecting and enhancing beneficial organisms, using adequate cultivation techniques, appropriate cultivars or seeds. Farmers must implement IPM and give preference to non-chemical methods if they provide satisfactory pest control. The main purpose is to reduce the dependency on pesticides in agriculture.

Contamination of the environment from pesticides may result from spray drift, volatilisation, surface run-off, and subsurface loss via leaching/drainflow. The persistence of pesticides in the environment differs greatly and is dependent on factors such as their susceptibility to attack by micro-organisms and enzymes, soil temperature and water content. In the last decade, a lot has been achieved in the agricultural sector to limit negative effects from pesticides. Organic farming is increasing year by year and now covers over 7 % of the EU UAA. Four million farmers have been trained in the safe use of pesticides, and the number of EU approved low risk or non-chemical substances have doubled since 2009[2].

The list of active substances collected by Eurostat as statistics on pesticides sales was amended by Commission Regulation (EU) No 2017/269 of 16 February 2017. Therefore, there is a break in the time series of pesticide sales statistics in 2016, because the active substances included in the major groups were revised between 2011-2015 and as of reference year 2016. Some newly approved substances were included in the data collection, while some substances received a different classification (for example changed from the major group 'Insecticides and acaricides' to 'Other plant protection products', or from the latter major group to 'Fungicides and bactericides'.