This article describes the methodology of the adult education survey (AES), a European Union (EU) harmonised survey on adult participation in learning activities.

The AES along with the following two other data collections, the continuing vocational training survey (CVTS) and the EU labour force survey (EU-LFS) provide EU statistics on lifelong learning.

The AES provides an overview of the participation of individuals in education and training (i.e. formal and non-formal education and training as well as informal learning). The reference period for the participation in the learning activities is the twelve months prior to the interview. The survey focuses on people aged 25-64. A pilot survey took place around the year 2007 and starting from the 2011 survey the AES is carried out every five years.

The following information is available from the AES:

Three waves of the AES have been implemented so far. The first AES (2007 AES) was a pilot survey conducted in 26 EU Member States (Ireland and Luxembourg did not participate), as well as in Norway, Switzerland and Tukey. This first wave was carried out based on a gentlemen’s agreement between 2005 and 2008 (depending on the country).

The second wave (2011 AES) was conducted in 27 EU Member States (Croatia did not participate), Norway, Switzerland as well as in Serbia and Turkey between July 2011 and June 2012. This statistical operation was for the first time conducted under the institutional mandate set in Regulation 452/2008, and implemented by Regulation 823/2010. This legal basis establishes the collection of data on the participation of adults (aged 25–64) in learning activities every five years.

The third wave (2016 AES) was conducted in 28 EU Member States, Norway, Switzerland as well as in Serbia, Turkey, Albania, Bosnia and Herzegovina and the Former Yugoslav Republic of Macedonia between July 2016 and March 2017. Regulation 1175/2014 provided the implementation details of this wave.

Further information on each wave is available in the reference metadata and in the implementation manuals.

Lifelong learning encompasses all learning activities undertaken throughout life with the aim of improving knowledge, skills and competences, within personal, civic, social or employment-related perspectives. The intention or aim to learn is the critical point that distinguishes these activities from non-learning activities, such as cultural or sporting activities. 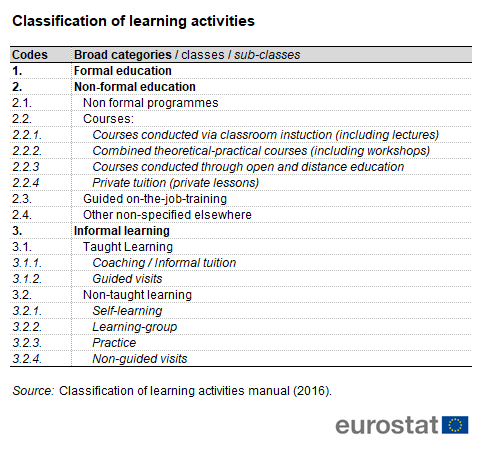 Job-related non-formal education and training: the respondent takes part in the non-formal education and training activity in order to obtain knowledge and/or learn new skills needed for a current or future job, to increase earnings, to improve job and/or career opportunities in a current or another field and generally to improve his/her opportunities for advancement and promotion.

Educational attainment level is the highest level of education successfully completed by an individual. Educational attainment is classified according to the International standard classification of education (ISCED). This classification allows for international comparability between the different national education systems, introducing criteria to categorise the education levels into a common nomenclature. It therefore facilitates comparisons across countries based on uniform and internationally agreed definitions.

Occupation is defined as the task and duties undertaken by each worker in their job. The International standard classification of occupations (ISCO) organises jobs into a clearly defined set of groups.

2011 and 2016 AES were classified according to ISCO-08; 2007 AES was classified under ISCO-COM 88. Data are directly comparable for the categories shown online.

Four categories of employee occupations are distinguished in the online tables on occupation:

The knowledge of foreign languages is self-reported by the respondents and is categorised in three levels in the 2011 AES questionnaire. The labels displayed in the online tables of domain educ_lang_00 correspond to the following self-reported knowledge:

Three types of areas are defined based on population density:

The 2016 AES European standard questionnaire has the following structure:

1.1 - Information on the household

1.2 - Information on the individual

1.4 - Participation in education and training

1.5 - Difficulties in participation in education

National questionnaires – which are based on the standard questionnaire for the sake of cross-country comparability – are available on this link.

For the 2011 AES, national quality reports as well as an EU quality report featuring metadata and methodological aspects of the survey are available on this link.

For the 2007 AES, an evaluation of the national quality reports is available on this link.

Eurostat publishes data on education and training which can be found on Eurostat's database and cover the following features:

These statistics are based on four main data sources:

The adult education survey and the labour force survey both provide data on participation in adult learning from the individuals' perspective while the CVTS covers the theme of adult learning through the enterprises (continuing vocational training).

On the other hand, the information found in the AES is richer than that of the LFS in the sense that the AES describes the learning activities in depth and also offers information on the command of foreign languages.

For adult participation in learning, see: