The strategic framework for European cooperation in education and training adopted in May 2009 had set a number of benchmarks to be achieved by 2020, including one for adult participation in learning, namely that an average of at least 15 % of adults aged 25 to 64 years old should participate in lifelong learning. In 2020, the proportion of persons aged 25 to 64 in the EU who participated in education or training was 9.2 %; a share that was 0.9 percentage points lower than the corresponding share for 2015 and 1.6 points lower compared to 2019. It is considered that part of the decrease could be related to the COVID-19 pandemic, i.e. cancellation of training activities. The adult learning indicator refers to participation in formal and non-formal education and training and the reference period for the participation is the four weeks preceding the interview as is usual in the labour force survey. (see Table 1).

Denmark, Finland and Sweden stood out from the other EU Member States as they reported considerably higher proportions of their respective adult populations participating in lifelong learning in the four weeks preceding the interview, ranging from 20.0 % to 28.6 %. Estonia, the Netherlands and Luxembourg were the only other Member States where the participation rate in 2020 exceeded the 15 % benchmark. By contrast, Romania, Bulgaria, Slovakia, Croatia and Poland reported adult learning rates of less than 4.0 %.

The proportion of the population who had participated in adult learning was higher among women (10.0 % in 2020) in the EU than among men (8.3 %); the shares for men and women were both lower in 2020 than they had been five years earlier. The participation rate of both women and men increased continuously until 2019 and fell in 2020 only, i.e. with the onset of the COVID-2019 pandemic.

In 2020, women recorded higher participation rates than men in all EU Member States except for Czechia, Germany, Greece and Cyprus (where rates for men were higher), while Romania reported the same rate for both sexes. The largest gender difference, in percentage points, was in Sweden, where the participation rate for women was 13.6 percentage points higher than for men. 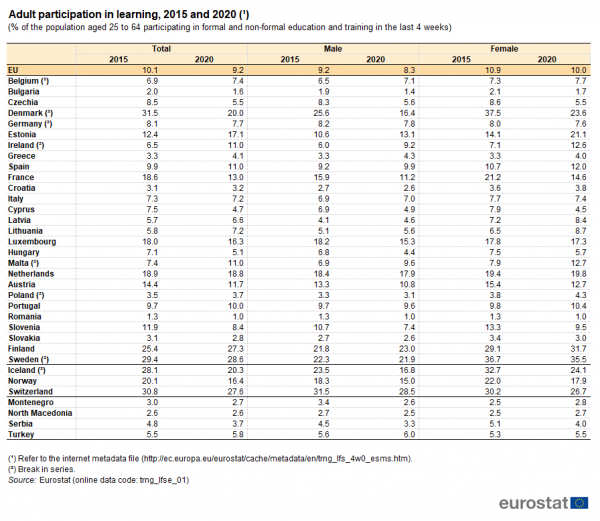 The likelihood of participation in education and training was related to the level of educational achievement: persons with a tertiary level education reported the highest participation rates (64.5 % for the EU in 2016), while those having completed at most lower secondary education were the least likely to have participated (22.9 %). 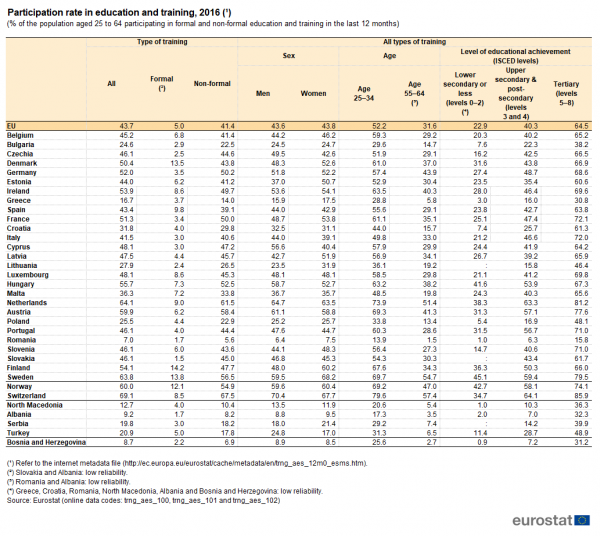 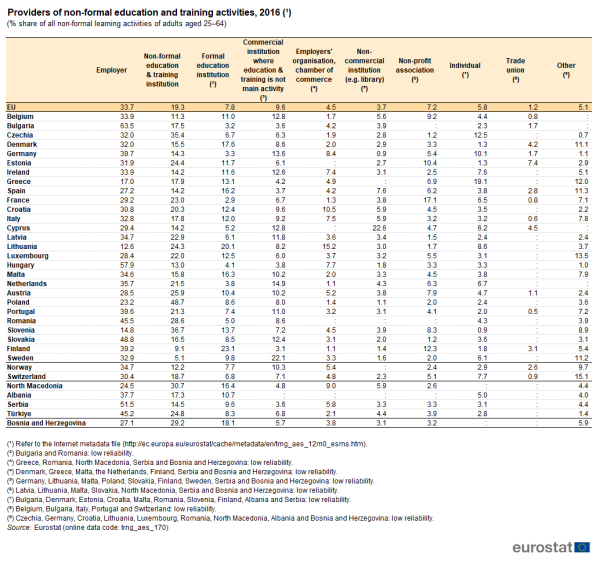 Additional and more detailed information on adult learning is available from the adult education survey (AES). The AES covers adults’ participation in education and training (formal, non-formal and informal learning) and refers to any education and training in which respondents may have participated during the 12-month period preceding the interview. The AES is implemented in EU Member States, EFTA countries and candidate countries. Three waves of the AES have been implemented so far, in 2007, 2011 and 2016. The first was a pilot exercise and was carried out on a voluntary basis, while the 2011 and 2016 AES were underpinned by legal acts (Commission Regulation (EU) No 823/2010 and Commission Regulation (EU) No 1175/2014). Following a change in legislation, the next wave is due in 2022 (Commission Implementing Regulation (EU) 2021/861).

The definitions applied in LFS and AES are in principle the same with one important difference: LFS data on non-formal education and training do not cover guided-on-the-job training.

In the Porto Social Commitment of 7 May 2021, the European Parliament, the Council of the EU, the European social partners and civil society organisations endorsed the target that at least 60 % of all adults should participate in training every year by 2030.

The European Skills Agenda outlines a five-year plan to help individuals and businesses develop more and better skills and to put them to use. Actions of the skills agenda also refer to tools and initiatives to support people in their lifelong learning pathways.

Within the European employment strategy Council decision (EU) 2020/1512 recently revised the employment guidelines. Guideline 6 concerns “enhancing labour supply and improving access to employment, skills and competences”. Amongst others, this guideline calls Member States to enable everyone to anticipate and better adapt to labour-market needs, in particular through continuous upskilling and reskilling.

In order to promote more and better learning opportunities for all adults, EPALE aims at supporting and strengthening the adult learning professions. EPALE is a virtual meeting place for adult learning practitioners and organisations at European level.