Macaronesia brings algae to the forefront of economic development

Through MACBIOBLUE, a network of universities, research institutes, companies and public administrations in the Macaronesian region is exploring the potential of using algae in products including fertilizers, pharmaceuticals, nutraceuticals and fish food. The project is reinforcing cross-border cooperation between Senegal and Mauritania, and the countries to which the four Macaronesian archipelagos in the north Atlantic Ocean belong: Spain, Portugal and Cape Verde. The project has successfully developed several processes and technologies on a semi-industrial scale that can be easily applied to aquaculture, agriculture, aquaponics, pharmaceuticals and nutraceuticals. 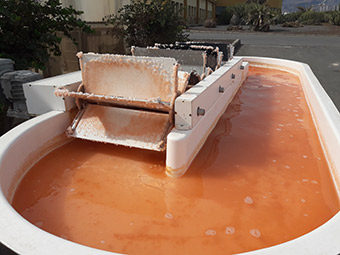 Prototype for the production of a “gourmet” salt that contains the microalga Dunaliella salina, designed and tested during MACBIOBLUE activity 2.1.3. ©Eduardo Portillo Hahnefeld

" The value of macro and microalgae native to the Macaronesian region has been unveiled through the development of innovative harvesting, processing, analytic and extraction protocols, as well as the determination of several bioactivities (anticancer, antibiotic, antifungal, anti-aging, antioxidant, insecticide, nematicide), their plant fertilisation potential and their nutritional capabilities for fish, animals and humans. This has increased the potential for developing new algae-based processes and products with a direct application in several industrial sectors, such as aquaculture, agriculture, pharmaceuticals and nutraceuticals. "

For instance, one cluster of partners explored the commercial potential of beach-cast macroalgae. These are currently considered a problem that hinder use of and commercial activity on beaches. However, by exploring different harvesting, processing and extraction protocols, the research team revealed that beach-cast macroalgae can be converted into valuable products. The potential of this biomass as a fertilizer is currently being explored on local, commercial plantations for plants such as lettuce and basil, with promising outcomes. Bioactivity tests have revealed its antioxidant, antiaging and antibacterial potential.

In addition, tests of macroalgae-enriched diets for fish have shown positive effects on growth rates, sizes and weight. Microalgae-based diets were assayed, with promising results on the enrichment of live prey such as rotifers, an aquatic invertebrate, and the brine shrimp Artemia, which are extensively used in aquaculture as food for fish larvae.

Surrounded by saline water and submersed in a warm, dry climate favourable to produce algae, the Macaronesian region is actively supporting research into algal biotechnology. Although Macaronesia’s economy relies predominantly on tourism, agriculture and small businesses, the potential economic value of the algae sector is promising, yet undiscovered.

Another cluster of MACBIOBLUE research partners is investigating the possible integration of biotechnological developments with traditional salt works. Specifically, they are exploring the potential of a green microalgae called Dunaliella salina, which is commonly found in saline environments and one of the few organisms capable of surviving in such extreme light, saline and dry conditions.

The project developed a process to produce a gourmet pink salt containing this type of microalgae. Since then, it has successfully been formalised into an approved patent in Spain, proving the potential of integrating traditional activities and biotechnological innovation.

So far, MACBIOBLUE has led to the cooperation of 10 companies with research centres to transfer and apply biotechnologies and processes to these businesses. This allows participating businesses to reduce the risk of investing in a promising, yet undiscovered market. The project has created several jobs, directly contributing to the region’s economic and social development. Any future outcomes are expected to contribute to a further diversification of the region’s economic activities.

Total investment for the project “MACBIOBLUE – demonstrative and technological transfer project to aid companies to develop new products and processes on Blue Biotechnology of the Macaronesian region” is EUR 1 764 352, with the EU’s European Regional Development Fund contributing EUR 1 499 699 through the “Interreg V-A - Spain-Portugal (Madeira-Açores-Canarias MAC)” Operational Programme for the 2014-2020 programming period.