Capitalising on porcelain as cultural heritage pays off in central Portugal

The “Vista Alegre Heritage Museum” project has succeeded in stimulating tourism in the Portuguese municipality of Ílhavo by focusing on its porcelain production that dates back nearly 200 years. The wide-ranging reindustrialisation effort encompassing a slew of different sectors saved the Vista Alegre factory from ruin, maintained and created jobs and has put Ílhavo on the map as a cultural destination. 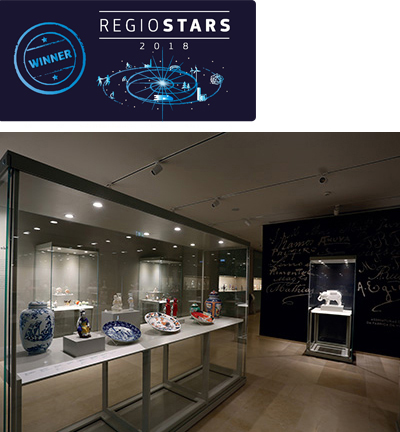 " Our winning strategy for stimulating sustainable and responsible tourism in Ílhavo was placing the porcelain industry and its heritage at the core of everything we planned and carried out – and that, as the statistics show, has worked wonders. "

Founded in 1824, Vista Alegre porcelain has been a focal point in Ílhavo for nearly 200 years and therefore an important part of the municipality’s history. The “Vista Alegre Heritage Museum” project capitalised on this by building a winning strategy to promote responsible and sustainable tourism around the well-known brand.

At the heart of the project – which integrates tourism, culture, community heritage and identity, as well as the art and porcelain industry – was the restoration and expansion of the Vista Alegre Museum. Its exhibition space has expanded from 365 m² to 6 531 m² following an overhaul that saw the inclusion of two invaluable porcelain ovens and several historical buildings. Since reopening after the renovation, the museum has seen a four-fold increase in the number of visitors and also offers popular workshops and artist internships.

Visitors can also tour the porcelain factory, as well as explore other surrounding attractions, that were also renovated or restored to their former glory as part of the project to make the area an international cultural centre focused on the area’s industrial heritage. These include a theatre, chapel, workers’ neighbourhood and a former palace that now harbours a hotel.

The museum’s aim is to portray the heritage of Vista Alegre porcelain in a vivid and continuous manner that involves rotations of its collection, with the whole complex transformed into a place of discovery. The hotel’s décor and architecture has made it one of the most attractive places to stay in the region. The 19th century theatre hosts plays quite often.

The project has paid off for Ílhavo, following a scare in 2009 that almost saw porcelain production shut down. Had that happened, it would have been a major setback for the region – replete with a loss of jobs, as well as the disappearance of key community history and culture.

In contrast, the project has seen significant regional impact, including the maintenance of 1 495 jobs and the creation of 100 new ones. Tourism is up, with overnight stays doubling. And the Vista Alegre factory has reported a 46 % jump in local store sales. Its international billing, meanwhile, saw a 25 % hike.

The reindustrialisation effort endeavour has led to well-received educational and interactive initiatives.

Porcelain workshops for schools and tourists attracted nearly 2 900 participants. And more than 120 artists have participated in the IDPool – Design Residence, a creative laboratory aimed at stimulating the exchange of ideas and experiences.

Since 2017, Ílhavo also hosts an illustration festival based at the museum that offers a wide range of activities including performances and special exhibits.

The project has also resulted in a wide array of partnerships, including with big name designers such as Christian Lacroix and Swedish furniture giant Ikea.

“As a resident of the city of Ílhavo, it gives me great pride to have participated actively in the assessment throughout the rehabilitation process of Vista Alegre Heritage Museum that aimed at the preservation of a unique historical and cultural heritage, which we were losing. The objectives were very ambitious, but the end result is amazing, and dignifies not only our municipality’s history, but mostly, our country’s.”

“The rehabilitation of Vista Alegre Museum revealed an historic path of nearly two centuries that had been hidden away from the public’s eyes for years. Along the exhibition the visitor is invited to travel through time, by getting to know unique pieces and valuable collections that served some of the most prestigious and renowned families in Europe. This project, gave our city visibility to a new audience in the tourism sector, and is bringing clear benefits to the regional and local economy.”

Total investment for the project “Vista Alegre Heritage Museum” is EUR 2 613 337, with the EU’s European Regional Development Fund contributing EUR 2 221 337 through the “Centro” Operational Programme for the 2007-2013 programming period. The investment falls under the priority “Local and urban cohesion”.