An education and Muslim cultural centre was constructed in Kruszyniany village, Poland, to attract tourists to the area while preserving the heritage of the Polish Tatar community, one of the smallest ethnic groups in Poland. 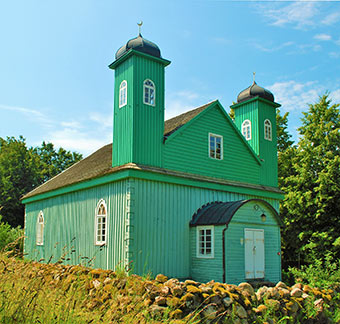 " The impact of the project is not limited to the region. It played an important role in tourism throughout the country. Increasing the tourist attractiveness of Kruszyniany and extending the tourist offer of Podlaskie region (which is the home of Białowieża Forest – the last remaining part of the primeval forest in Europe) resulted in an influx of tourists from all over the world, who arrive to learn about the history of co-existence of cultures and religions in this border region. "

Aside from the construction of the Polish Tatar Centre of Education and Muslim Culture, an educational shed and tourist information office were built. Old stables were adapted for tourist recreation and fencing was installed.

The centre increased visitor numbers by creating a website and call centre for reservations and information. The project led to an increase in accommodation, catering, restaurant and conference facilities in the village. Two permanent jobs were created with the centre.

Kruszyniany village is on the eastern boundary of Poland, in the Podlaskie region. It is a place of historical and cultural value for the Tatars, who have been living there since the 16th century. The centre was built in the vicinity of two unique historical sites: an XVIII-century wooden mosque, which is still in use today, and a historical mizar, or cemetery, which the Polish president declared a historical monument in 2012 – the highest distinction given to monuments in Poland.

The Tartar culture has for centuries been an integral part of Polish culture, displaying that, historically, cultural diversity among different nations coexisted. One of the aims of the project was to preserve the religion, customs and traditions of the people in this region, while showing respect for minority rights. To do this, the project developed a cooperation programme with the Institute of Ethnology and Cultural Anthropology of the University of Warsaw and the Institute of History at the University of Bialystok, where internships and intercultural workshops for students are organised.

A programme called ‘Kruszyniany – the history of Polish Tatars’ is introducing visitors to the culture of the Tartars. This is being done through educational and information campaigns like workshops, shows, events, festivities, opening Tatar monuments for sightseeing, and sharing stories and cuisine. It had the indirect impact of creating accommodation, catering and conference facilities in the village for tourists.

It increased the number of tourists to the Podlaskie region, which is known for its cultural and religious diversity and for the Białowieża forest.
Tourism season was extended by ensuring activities are available throughout the year, including winter attractions such as cross-country skiing and sleigh rides.

Total investment for the project “Polish Tatars Centre of Education and Muslim Culture” is EUR 1 203 943, with the EU’s European Regional Development Fund contributing EUR 805 362 through the “Regional Operational Programme for Podlaskie Voivodeship” for the 2007-2013 programming period. The investment falls under the priority “Social inclusion” and Justice and “Fundamental rights”.

Podlaskie
View programmes for this region